Poland: Rewarded with UN Security Council membership whilst flirting with Racism and Nationalism

On 2 June 2017, Poland took a seat at the UN Security Council to serve alongside Côte d’Ivoire, Equatorial Guinea, Kuwait, and Peru as non-permanent members. The newly elected non-permanent members are tasked with the responsibility, amongst other things, to help the UN permanent Security Council with the maintenance of international peace, security, and most importantly to act as a body that brings all nations together. For the Polish government, it’s a step toward acting globally without fear of serious challenges. Such challenges will include abiding by the UNESCO’s four statements on race issues – ‘Statement on race’ declared in Paris in 1950; ‘Statement on the nature of race and race differences’ declared in Paris in 1951; ‘Proposal on the biological aspects of race’ declared in Moscow in 1964; and ‘Statement on race and racial prejudice’ declared in Paris in 1967. It seems fair to say that the current Polish government’s (Law and Justice – PiS) record falls short of the expected standards.

Not so much of bringing people together
Since winning the Polish parliamentary election in 2015, PiS has sought to position itself as a defender of Polish culture and tradition. The government takes traditionalist-Catholic-conservative views on social issues as most members of parliament take a strong stance against in-vitro fertilisation, oppose same-sex marriages and abortion, even in the cases of rape or incest. These moves are seen as a threat to the Polish liberal democratic system that led to a nationwide Black Protest in 2016. Recently, the purging of the civil service, control of media, and the dismantling of the rule of law that gives PiS control over judicial appointments led to the EU’s concern over the fundamental European values at risk in Poland.

Anti-Muslim Refugees sentiments
In 2015, the EU launched a relocation plan as response to the arrival of migrants from the Middle East and Africa. This measure was introduced to alleviate pressure on Greece and Italy which received the vast majority of refugees. A quota was introduced based on the size and wealth of countries in the EU. Poland and Hungary refused to accept their quotas, as Kaczyński and Orbán believed that the refugees posed health and security risks to their countries. This fear, according to  new research on Islamophobia in Poland, is based on the myth that Muslim-refugees are a serious threat to ‘our way of life’ and ‘our social and cultural norms and values’ as well as being if not yet, then ‘prospective terrorists’.

What is particularly dangerous about the Polish seat on the Security Council  is how it overlooks how this stance fuelled anti-Muslim sentiments in Poland in 2017, sentiments that led to the EU referring ‘the Czech Republic, Hungary and Poland to the Court of Justice of the EU for non-compliance with their legal obligations on relocation’.

Flirting with Racism and Nationalism
Whilst many Polish citizens have benefited immensely from the freedom of movement across European Union countries, in Poland, immigrants from the Middle East and Africa have very different experiences. Their experiences are impacted by right-wing activities, and resistance from the public due to fears of terrorism. What is particularly interesting is that the conditions created by the Polish Interior Minister, Mariusz Błaszczak, denying the existence of racism in Poland, and the interventions from the Polish Justice Minister in the sentencing of a convicted anti-Semite, Jacek Międlar, legitimised overt racism. These were witnessed during the 2017 Poland’s March of Independence (Marsz Niepodległości), where the call for ‘White Europe’ and the need for ‘Clean Blood’ resonated with some Polish marchers. Błaszczak sees such march as ‘beautiful sight’ of people expressing their love for Poland. The support given to such action led to a meteoric rise in right-wing activities in the country and the need to be patriotic to the state, as highlighted in a new study on how some Polish ‘teachers define historical reality through the prism of nationalist discourse’.

There are other places where the flirtation with racism and nationalism can be seen. For instance, the Jasna Góra Monastery is a famous Polish shrine of the Virgin Mary and one of the country’s places of pilgrimage. On 13 January 2018, the monastery was at the centre of racist events where nationalist slogans were pronounced. Similar to previous pilgrimage events with a banner displaying ‘White Uni(a)ted’ as reference to white supremacy. Some participants chanted about hanging communists from trees, ‘Death to enemies of the fatherland’ and brandished an image of Janusz Waluś, the Polish white supremacist currently serving life sentence in South Africa for trying to start race war by murdering a black anti-apartheid leader.

In addition, members of Duma i Nowoczesność (Pride and Modernity), a Polish far-right group, were recently investigated for dressing up in SS uniforms, admiring Hitler and carrying out a ceremony around a burning swastika. What is especially interesting about this is that Pride and Modernity is connected to Ruch Narodowy (National Movement), a far-right organisation that had a few MPs elected in 2015. Ruch Narodowy has sought to become the face of Polish nationalism that provides cover for many extremists in Poland.

There is much here that demonstrates clear features of racism and nationalism. On 26 January 2018, the Polish Lower house (Sejm), controlled by PiS, passed a bill that criminalises anyone who attributes blame to the Polish state for  War crimes committed by Nazi Germany. Such a bill would appear to be against the rule of law and freedom of expression and has attracted great concerns from the international community led by the Israeli Prime Minister, Benjamin Netanyahu, describing the bill as an attempt to rewrite history. According to the following survey by the Centre for Research on Prejudice, University of Warsaw, the public debate about this bill was heavily influenced by ethnic nationalism and hate speech. 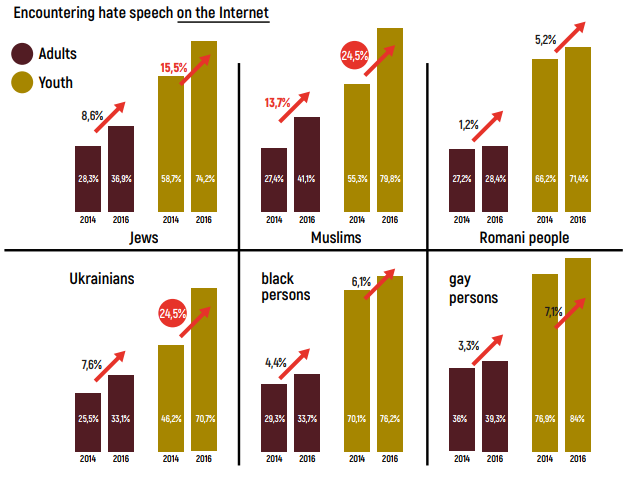 Perhaps the simplest way to put this is that PiS is mainly playing to its base with what may seem like an attempt to make Poland great again. When asked about how much racist and xenophobic violence there is in Poland, Anna Tatar from NEVER AGAIN explains:

While there were a dozen or so of such events a month, now there are several of them a day, sometimes even a dozen or so. These are cases we know about, and there is still a dark number of events not reported anywhere.

At this juncture, what seems worth noting are the ways in which the current Polish nationalist government has contradicted the authentic Polish values of accommodation, hospitality and solidarity. A better explanation rests on how PiS plans to maintain international peace considering its right-wing alignments and dubious judicial reform that prompted political sanctions from the EU. It is to be hoped that Poland’s Security Council membership would serve as an opportunity for the international community to hold PiS to account on some of the issues highlighted above.

Bolaji Balogun is a Doctoral Researcher in Sociology and Social Policy, University of Leeds. He holds The Leverhulme Trust award as a Visiting Scholar at the Department of European Studies, University of Economics Krakow, Poland. Bolaji’s research focuses on race and racism in Poland.