COVID-19 was categorised by the World Health Organisation (WHO) as a global pandemic on 11 March 2020. The direct and indirect racialisation of COVID-19 was established early on.  The virus, widely claimed to originate through what was communicated via a Western lens as ‘abnormal’ cultural eating habits, was from the outset racialised as a ‘Chinese problem’. Various racialised terms were applied, such as the ‘Wuhan virus’ and the ‘Kung Fu Flu’, the latter term even used by the then President of the United States of America, Donald Trump.

The global Sinophobia (anti-Chinese sentiment) which ensued, especially as cases of the virus began to appear across Australia, Europe and USA, manifested in ways ranging from social media memes and jokes, through to increased racist attacks on people perceived to be of Chinese descent. Simultaneously, another form of racialised narrative began to emerge at the early stages of the pandemic regarding the risk of infection, particularly within Chinese and Western media. However, this time in ways maintained to be ‘positive’. This was the narrative about how African and African descended people were supposedly immune to COVID-19.

“There are so many stupid, ridiculous conspiracy theories about black people not being able to get it. …That is the quickest way to get more black people killed.” Idris Elba

Between May and July 2020, a University of Liverpool research project brought together academics and community-based researchers in the UK, South Africa, Kenya and Ghana, to co-design rapid research to explore the racialisation of risk narratives for preventing COVID-19 infection in South Africa, Kenya and Ghana. Researchers examined social media, media, government policy and local radio to identify and collate local examples of risk narratives about prevention of COVID-19 infection to explore how or if the understandings of risk were racialised.

The research sought to identify how racialised assumptions about COVID-19 risk and prevention, particularly the immunity myth for African people and those of African descent impacted on the public and State risk narratives for preventing infection in countries on the African continent. The publication of separate country reports on what researchers found in Ghana, South Africa and Kenya is a way of reflecting the specificity of what was happening in relation to COVID-19 prevention narratives in media and State policy/strategy. A comparative analysis of a number of common racialisation themes is provided in the fourth report.

“…there is absolutely no evidence to back up the idea – and indeed, we know that people with black skin are getting infected.”  Professor Thumbi Ndung’u, Nelson R Mandela School of Medicine (Durban)

The myth of melanated skin having some form of resistance to COVID-19, started in China and gained momentum in Europe and the Americas, but it definitely affected these African countries during in the early days of the pandemic. However, our research showed how more than this singular myth, the idea of biological race in these African societies was an intrinsic part of their pandemic discourses and responses.

Immunity and the Racialised ‘Infodemic’
According to Mirriam-Webster, ‘Infodemic’ is ‘a blend of ‘information’ and ‘epidemic’ that typically refers to a rapid and far-reaching spread of both accurate and inaccurate information about something, such as a disease. As facts, rumors [sic], and fears mix and disperse, it becomes difficult to learn essential information about an issue.’ This became increasingly used in relation to international responses to COVID-19 misinformation and myths. In mid- February 2020, Tedros Adhanom Ghebreyesus, Director-General of WHO,  at a gathering of foreign policy and security experts in Munich, Germany, warned that ‘We’re not just fighting an epidemic; we’re fighting an infodemic,’ referring to fake news that ‘spreads faster and more easily than this virus.’

What we observed in this research was that for these three African countries, the nature of the infodemic about COVID-19 was and is often racialised. This was detected primarily through social media posts and memes or jokes, but also in messages from political and religious leaders, and occurred primarily in two key ways.  Firstly, there was explicit racialisation in terms of who was believed to be more or less at risk of infection (immunity/susceptibility) and in terms of who was perceived as presenting the most risk to others, i.e. who were the main ‘spreaders’ of infection. Secondly, there was implicitly racialised misinformation, again about immunity and susceptibility, but also about prevention, treatment and cures.

In efforts to counter the plethora of false information about how to prevent the risk of infection, the WHO developed a public resource for ‘mythbusting’. This included addressing the misconceptions which could be argued to only affect people in the Global South, or those descended from these areas. These were mainly the myths that hot climates or sunshine meant that the risk of being infected with Coronavirus was reduced and that adding hot pepper to food would not prevent infection.

However, the WHO ‘myth-busting’ strategy fails to specifically articulate the need for this campaign to counteract the myths, of unknown origins, which were clearly racially imagined. Actively addressing misinformation, but not considering the racialised nature of this, only reinforced the ‘deficit’ framing of local indigenous knowledge as ‘backward’ natural, spiritual, religious or mythical beliefs. This combined with an absence of transparency and data-sharing on the risk of Coronavirus, that is locally produced and trusted, leaves a void that can be filled with powerful and persuasive social (sometimes religious), media (even celebrity) and political narratives. Power is the main dynamic in what information prevails. It is not known who was involved in creating the content for this campaign, but when it comes to harmfully racialised misinformation and myths those who are most affected by its impact should be empowered to counteract them with their knowledge and expertise.

Finding the source of memes, What’s App videos or jokes was impossible. Many of these were overtly racialised in nature but understanding who has created them, from where and for what purpose can shed light on these powerful influencers of beliefs and opinions, especially in relation to COVID-19 origination and prevention of risks. 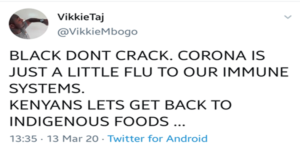 We observed the influence these forms of communications seemed to have on people and how they created or reinforced racialised ideas. There was a clear unquestioning aspect to some of these communications, especially if they were perceived as ‘positive stereotypes’ rather than explicitly offensive or racist, most likely because people don’t know where they have originated from. There will likely be an assumption that ‘positive’ myths have emanated from within the group they are seen to bestow advantage upon (i.e. Black immunity myths come from Black people).  However, it is worth clearly restating that in our attempts to study the racialisation of misinformation, we were hamstrung by the inability to see where information was emanating from.

The Desire to Believe in Black Advantage
The mythologies about treatment and prevention, of which Black immunity is one, was starting to gain attention in regional action to undermine ‘misinformation’ or ‘fake news’. It was clear that this misinformation posed a risk to the effective COVID-19 responses by institutions, governments and people in African countries. Nonetheless, it was in the main positively received in risk narratives. Using an Afrocentric lens, it is understandable that there is a desire to have something to shift the balance of rhetoric about Africa, Africans and people of African descent. The Afrocentric concept Asante recommends is explained by Ama Mazama as a paradigm to address the problem of ‘[African descended people’s] unconscious adoption of the Western worldview and perspective and their attendant conceptual frameworks…[relegating African people to] spectators of a show that defines us from without.’

Not wanting to be seen as a victim and inferior is attractive to any individual or group who regularly experience discrimination and oppression. The popularity of these narratives of innate African [Black] strength and resilience to the virus is in a sense a response to the relentless pressure of global racism, likely heightened by the increased visibility, especially on social media, of racist brutality and the call of Black Lives Matter. For individuals and the State, it offered an alternative discourse which could disrupt the non-stop stream of negative portrayals of Black people, particularly Black Africans.

In terms of the latter, Africa being ‘under-developed’ or ‘developing’ nations that have not yet caught up to the ‘advanced’ nations of the Global North underpins not only media narratives, but even the narratives of international development. It is understandable for African and African descended people’s narratives to cling onto, especially at this time, any form of perceived advantage over so-called developed nations and an advantage to being Black in such an unequal world. This mythology drew upon spiritual belief (in respect of the African relationship to nature), religious belief and even references from popular culture such as the Marvel comic and film Black Panther. The miraculous resistance that increased melanin was proposed to offer in these narratives, however, is problematically predicated on the ‘magical negro’ belief and steeped in Western eugenicist notions.

This research demonstrates how at the outset of the pandemic, the ideas of Black immunity, which to some extent is creeping back through questions about why African countries have had lower deaths, melded together with the ideas that this virus should not or would not affect Africans. There is tragic irony to the racialised immunity myth and the potential impact of this on the lived reality of Black people during the pandemic. It has not yet been empirically traced or captured, if it is even at all possible, but its influence is theoretically multi-fold.

For more information on this project, see the website (@c19race).