Anti-racism is a battle for memory. Enzo Traverso well underlined how statues brought down in the last year show “the contrast between the status of blacks and postcolonial subjects as stigmatised and brutalised minorities and the symbolic place given in the public space to their oppressors”.

Material traces of colonialism are in almost every city in Italy, but finally streets, squares, monuments are giving us the chance to start a public debate on a silenced colonial history.

Igiaba Scego, Italian writer and journalist of Somali origins, is well aware of the racist and sexist violence of Italian colonialism and she points out the lack of knowledge on colonial history.

“No one tells Italian girls and boys about the squad massacres in Addis Ababa, the concentration camps in Somalia, the gases used by Mussolini against defenseless populations. There is no mention of Italian apartheid (…), segregation was applied in the cities under Italian control. In Asmara the inhabitants of the village of Beit Mekae, who occupied the highest hill of the city, were chased away to create the fenced field, or the first nucleus of the colonial city, an area off-limits to Eritreans. An area only for whites. How many know about Italian apartheid?” (Scego 2014, p. 105).

In her book, Roma negata. Percorsi postcoloniali nella città (2014), she invites us to visually represent the historical connections between Europe and Africa, in creative ways; for instance, she worked with photographer Rino Bianchi to portray Afro-descendants in places marked by fascism such as Cinema Impero, Palazzo della Civiltà Italiana and Dogali’s stele in Rome.

Inspired by her book, we decided to go further, giving life to ‘Decolonizing the city. Visual Dialogues in Padova’. Our goal was to question ourselves statues and street names in order to challenge the worldviews and social hierarchies that have made it possible to celebrate/forget the racist and sexist violence of colonialism. The colonial streets of Padova have been re-appropriated by the bodies, voices and gazes of six Italian Afro-descendants who took part in a participatory video, taking urban traces of colonialism out of insignificance and re-signifying them in a creative way.

Wissal Houbabi, artist “daughter of the diaspora and the sea in between“, moves with the soundtrack by Amir Issa Non respiro (2020), leaving her poetry scattered between Via Cirenaica and Via Libia.

“The past is here, insidious in our minds, and the future may have passed.

If my people wanted to be free one day, even destiny would have to bend”. 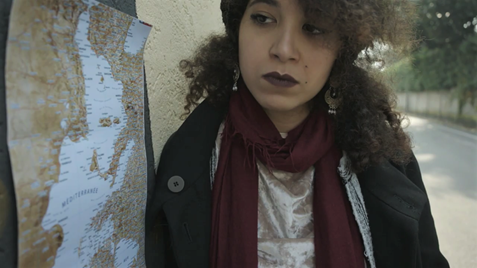 Cadigia Hassan shares the photos of her Italian-Somali family with a friend of hers and then goes to via Somalia, where she meets a resident living there who has never understood the reason behind the name of that street. That’s why Cadigia has returned to via Somalia: she wants to leave traces of herself, of her family history, of historical intertwining and to make visible the important connections that exist between the two countries.

Ilaria Zorzan questions the colonial past through her Italo-Eritrean family photographic archive. The Italians in Eritrea made space, building roads, cableways, railways, buildings… And her grandfather worked as a driver and transporter, while her Eritrean grandmother, before marrying her grandfather, had been his maid. Ilaria conceals her face behind old photographs to reveal herself in Via Asmara through a mirror.

Emmanuel M’bayo Mertens is an activist of the Arising Africans association. In the video we see him conducting a tour in the historic center of Padova, in Piazza Antenore, formerly Piazza 9 Maggio. Emmanuel cites the resolution by which the municipality of Padova dedicated the square to the day of the “proclamation of the empire” by Mussolini (1936). According to Emmanuel, fascism has never completely disappeared, as the Italian citizenship law mainly based on jus sanguinis shows in the racist idea of ​​Italianness transmitted ‘by blood’. Instead, Italy is built upon migration processes, as the story of Antenor, Padova’s legendary founder and refugee, clearly shows.

Mackda Ghebremariam Tesfau’ questions the colonial map in Piazza delle Erbe where Libya, Albania, Ethiopia and Eritrea are marked as part of a white empire. She says that if people ignore this map it is because Italy’s colonial history is ignored. Moreover, today these same countries, marked in white on the map, are part of the Sub-saharan and Mediterranean migrant routes. Referring then to the bilateral agreements between Italy and Libya to prevent “irregular migrants” from reaching Europe, she argues that neocolonialism is alive. Quoting Aimé Césaire, she declares that “Europe is indefensible”.

The video ends with Viviana Zorzato, a painter of Eritrean origin. Her house, full of paintings inspired by Ethiopian iconography, overlooks Via Amba Aradam. Viviana tells us about the ‘Portrait of a N-word Woman’, which she has repainted numerous times over the years. Doing so meant taking care of herself, an Afro-descendant Italian woman. Reflecting on the colonial streets she crosses daily, she argues that it is important to know the history but also to remember the beauty. Amba Alagi or Amba Aradam cannot be reduced to colonial violence, they are also names of mountains, and Viviana possesses a free gaze that sees beauty. Like Giorgio Marincola, Viviana will continue to “feel her homeland as a culture” and she will have no flags to bow her head to.

The way in which Italy lost the colonies – that is with the fall of fascism instead of going through a formal decolonization process – prevented Italy from being aware of the role it played during colonialism. Alessandra Ferrini, in her ‘Negotiating amnesia‘,refers to an ideological collective amnesia: the sentiment of an unjust defeat fostered a sense of self-victimisation for Italians, removing the responsibility from them as they portrayed themselves as “brava gente” (good people). This fact, as scholars such as Nicola Labanca have explained, has erased the colonial period from the collective memory and public sphere, leaving colonial and racist culture in school textbooks, as the historian Gianluca Gabrielli (2015) has shown.

This difficulty in coming to terms with the colonial past was clearly visible in the way several white journalists and politicians reacted to antiracist and feminist movements’ request to remove the statue of journalist Indro Montanelli in Milan throughout the BLM wave. During the African campaign, Montanelli bought the young 12-year-old-girl “Destà” under colonial concubinage (the so‑called madamato), boasting about it even after being accused by feminist Elvira Banotti of being a rapist. The issue of Montanelli’s highlights Italy’s need to think critically over not only colonial but also race and gender violence which are embedded in it.

Despite this repressed colonial past, in the last decade Italy has witnessed a renewed interest stemming from bottom-up local movements dealing with colonial legacy in the urban space. Two examples are worth mentioning: Resistenze in Cirenaica (Resistances in Cyrenaica) in Bologna and the project “W Menilicchi!” (Long live Menilicchi) in Palermo. These instances, along with other contributions were collected in the Roots§Routes 2020 spring issue, “Even statues die”.

Resistenze in Cirenaica has been working in the Cyrenaica neighbourhood, named so in the past due to the high presence of colonial roads. In the aftermath of the second world war the city council decided unanimously to rename the roads carrying fascist and colonial street signs (except for via Libya, left as a memorial marker) with partisans’ names, honouring the city at the centre of the resistance movement during the fascist and Nazi occupation. Since 2015, the collective has made this place the centre of an ongoing laboratory including urban walks, readings and storytelling aiming to “deprovincialize resistances”, considering the battles in the ex-colonies as well as in Europe, against the nazi-fascist forces, as antiracist struggles. The publishing of Quaderni di Cirene (Cyrene’s notebooks) brought together local and overseas stories of people who resisted fascist and colonial occupation, with the fourth book addressing the lives of fighter and partisan women through a gender lens.

In October 2018, thanks to the confluence of Wu Ming 2, writer and storyteller from Resistenze in Cirenaica, and the Sicilian Fare Ala collective, a public urban walk across several parts of the city was organized, with the name “Viva Menilicchi!”. The itinerary (19 kms long) reached several spots carrying names of Italian colonial figures and battles, explaining them through short readings and theatrical sketches, adding road signs including stories of those who have been marginalized and exploited. Significantly, W Menilicchi! refers to Palermitan socialists and communists’ battle cry supporting king Menelik II who defeated the Italian troops in Aduwa in 1896, thus establishing a transnational bond among people subjected to Italian invasion (as Jane Schneider explores in Italy’s ‘Southern Question’: Orientalism in One Country, South Italy underwent a socio-economic occupation driven by imperial/colonial logics by the north-based Kingdom of Italy) . Furthermore, the urban walk drew attention to the linkage of racist violence perpetrated by Italians during colonialism with the killings of African migrants in the streets of Palermo, denouncing the white superiority on which Italy thrived since its birth (which run parallel with the invasion of Africa).

These experiences of “odonomastic guerrillas” (street-name activists) have found creative ways of decolonising Italian history inscribed in cities, being aware that a structural change requires not only time but also a wide bottom-up involvement of inhabitants willing to deal with the past. New alliances are developing as different groups network and coordinate in view of several upcoming dates, such as February 19th, which marks the anniversary of the massacre of Addis Ababa which occurred in 1937 at the hands of Italian viceroy Rodolfo Graziani.

Annalisa Frisina is Associate professor of Sociology at the University of Padova, Italy. Her last book is “Razzismi Contemporanei. Le prospettive della sociologia” (“Contemporary Racisms. Sociological Perspectives”) published by Carocci, 2020. Elisabetta Campagni has a Masters in Sociology from the University of Padova, Italy. She works on issues of antiracism, second generations and minority rights through visual and artistic projects.