Visual Arts and British Imperialism in India in the Eighteenth Century: A Colonial Society in the Making

By the beginning of the eighteenth century, painting and drawing had acquired the status of a marker of respectable taste and lifestyle in Britain. Accordingly, as British political presence in India tended to increase in course of the century, the need and importance of visual arts were felt like never before in the history of India’s encounter with Britain. The rapidly growing British society in the presidency towns of Madras, Calcutta, and later Bombay, had its own aspirations. Whilst portraits and miniatures were often exchanged before departure to India, remembrance of lives and times spent in India and also an impression of its peoples and surroundings had to be brought back for display and for showing to members of families and friends at home in Britain. To the Britons in the service of the East India Company or even during the Raj, India could never become the home where they could find comfort and succour. India was a duty to be undertaken with rigour and responsibility and at the end of the service awaited benefits that ranged from being economic gains and emoluments to moral satisfaction of bringing civilisation to a land cursed by centuries of decadence and superstitious beliefs.

Coming back to the aspirations of British communities in India, besides being fondly nostalgic about their homeland, they strived to build up an identity of their own. The process of fabrication of a colonial ‘British’ identity was complicated and operated at various levels. The fact that Britons’ urge in India not only to adhere to, but also uphold their essential ‘Britishness’ seemed more pressing because living among indigenous populace always posed the danger of ‘going native’ and being overwhelmed. Additionally, hierarchies and standards of social behaviour had to be maintained in a manner that inclusion and even mobility within the higher social circles of Britain could be ensured upon return and re-settlement. Another important dimension was that of making the growing British political power in India visible to Indians and to the Britons back in Britain. Cardinal to the exercise of authority was to make it perceptible by means of a symbolic apparatus before it could be adored and respected. The role of the visual arts in eighteenth-century India was thus multifaceted, meeting varied socio-political and cultural needs of a diasporic British society in India. 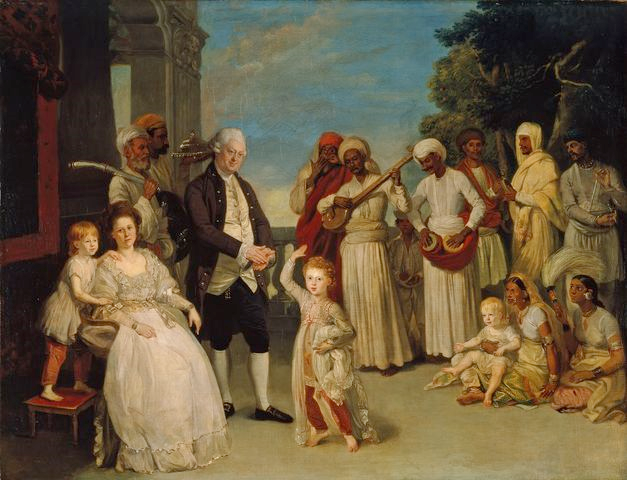 The multifaceted role of visual arts as outlined above required different levels of usage and applicability. Britons embellished the interiors of their houses with imported prints, and paintings that they had brought with themselves. But the ongoing life and politics in India demanded more visibility. Accordingly there came professional British artists who long troubled by the competitive art market in Britain, looked upon India as a place where they could readily get artistic patronage and quite literally, expected to roll in sands of gold. Artistic patronage could come not only from the resident Britons, but also from Indian elite and royalty who had also begun to take interest in western art. Many a portrait were painted, and paintings featured in inventories of British houses, were sold off in auctions, and could also be seen in Indian palaces and British official buildings. Books of illustrations such as Thomas and William Daniell’s Oriental Scenery and Robert Colebrooke’s Twelve Views of Places in the Kingdom of Mysore were widely subscribed not only in Britain but also in India. Such images not only ensured that India was well familiar to the British audiences back home, but also intervened in what terms it was to be known. India, its population and landscapes, in the works of British artists was represented chiefly in a way that would speak to the politico-social conventions of Britain with subtle touches of Indian culture and life only where appropriate to British standards. 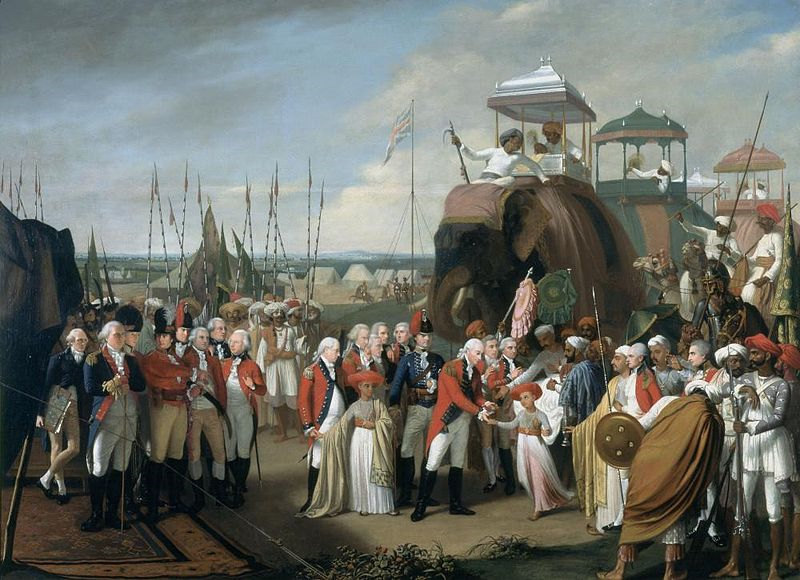 Robert Home, Lord Cornwallis receiving the sons of Tipu Sultan as hostages after the Third Anglo-Mysore War, 1793. Cornwallis had asked for Tipu’s sons as hostages as a guarantee that Tipu would fulfil the terms of reparations that had been agreed between him and the British.

As philosopher and historian of Indian art Ananda Coomaraswamy (1919) had suggested, British artists could never fully appreciate India on its own terms as they viewed and understood it largely as a curiosity. The depictions of Indian sites and peoples in images were attempted in a manner that addressed the idea of Britons as the rulers of India. Whilst official surveys of territories under the British government tended to become prominent, artists represented India and Indians as if being explored by British public. Even the gaze of travellers to other parts of India was that of surveillance and had an eye for taking possession. Indian rulers were presented in the images as if they were incapable, indolent, exploitative personae, and when juxtaposed with the images of the British officials in sturdy in their formal and official attire, they appeared out of place in their own kingdoms. The British visual representations of India were therefore a means of alienating India from itself and presenting it as a part of British empire. 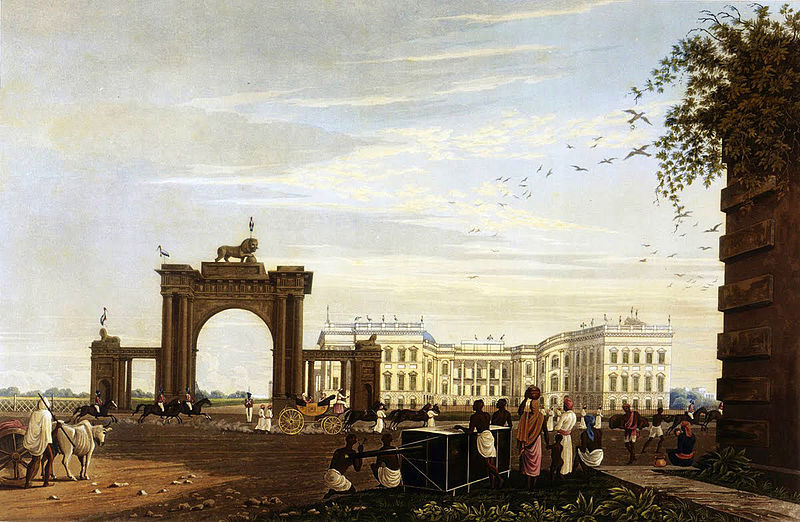 James Baillie Fraser, A View of the Government House in Calcutta from Eastward as part of his collection of landscape scenes of Calcutta, 1824. The Government House was built by Marquess of Wellesley as Governor-General with his ambition to rule India ‘from a palace’.

But what about Indian artists? Traditionally, ‘high art’ in India was centred on the taste and preferences of the royalty and elite groups. Artists worked in the karkhanas (or workshops) under royal patronage and upkeep. As Indian kingdoms tended to decline with the rise of the British to political power, these artists fell out of patronage, they looked up to the Britons for economic opportunities. Gradually, Indian artists tried to adjust their painting styles to suit British preferences. Thus was born the Company School of Art, which was a hybridised form based on Indian subject-matter and British artistic practices. To the Britons, however, Indian artists were at best good copyists of works by British artists. Although various professional British artists often employed Indian artists as assistants and the British art back in Britain could not altogether deny the influence of Indian art, Indian artists were deemed as lacking the fundamental understanding of perspective. In the early 1780s, famous Orientalist, Sir William Jones had pointed out that in terms of arts, Asiatic people were ‘at the infancy of civilisation’. It took until the times of Raja Ravi Varma for the British to realise that the Indians had finally become adept in understanding and executing western artistic formulae. Even when Indian rulers avidly collected western automata and art objects, they were seen as lacking the sense of discernment in selecting as well properly displaying such items.

How can we think about British art and visual representations in terms of Indian society? Whilst scholars nowadays are increasingly trying to look beyond official archives to address private letters and cultural productions such as images and objects, it is important to remember that the latter are also informed by contemporary mental attitudes and sensibilities which were based on a supposed superiority of Europe over non-European world. It is thus important nuance our outlook towards socio-cultural life by recognising more the historical contexts that reveal surprising, yet quite obvious concurrences between the official and private approaches towards indigenous societies. Postcolonial studies, in their emphasis on discursive analysis to look for agency in colonised groups, should not only acknowledge the fundamental inequity of power more, but also there is need to be more aware of the dislocations effected by the epistemic violence of imperialism. As we ascertain the presence of the colonised through their absence in the sources of the past, we must also remember that history as an academic discipline as it developed in the nineteenth century was not intended to include them on their own right. Colonised societies were denied of a ‘historical past’ and their histories were re-written in order to suit and legitimise the imperialist projects. Thus, as we approach images  as cultural artefacts of empire, it is necessary that they are also studied and analysed in the light of official records so as to be mindful of what visuality can entail when it came to the representation of British imperialism.

If we take the recent times as changed and as heralding an era wherein not only steps would be taken to alleviate (or even eliminate) discrimination of all kinds including racial, but also the inequalities of the past can be interrogated, it is important for us to be asking the right questions that might make us rethink even our most personal choices of diet or dress or lead to interactions in everyday life turning uncomfortable. Part of knowing the past is not to just accept it and move on, but also confront it in a way our present and future could be made into better places to be.

References:
Ananda Coomaraswamy, ‘The Significance of Oriental Art’ in  The Art Bulletin, 01 September 1919, Vol.2(1), p.17-22.
Paintings of the Company School are scattered all over the world in different museums, art galleries, and private collections. The most notable ones in the UK may include The British Library, Victoria and Albert Museum, and British Museum.

Apurba Chatterjee is a PhD candidate in History at The University of Sheffield. Her research interests centre around art, politics, and the cultural legacies of British Imperialism in India. She can be found on twitter as @chatterjee108.