THE THINKBELT: THE UNIVERSITY THAT NEVER WAS

In this commentary, I revisit an article from New Society which evokes a moment in the development of British higher education in the post-war period but also, I argue, could still illuminate thinking on debates about the roles and responsibilities of universities within their wider social settings. The Potteries Thinkbelt piece, published in 1966, proposes an unbuilt project that today serves as a parable of what higher education did not become, of a path not taken. To contemporary eyes, aspects of the Thinkbelt proposal may seem fantastical; yet, if we can enable what Coleridge named ‘that willing suspension of disbelief’, it could offer us lessons about the relationship between universities and the cities or regions that host them.

The author of the Thinkbelt was Cedric Price, an architect with relatively few realized projects but who, through his teaching roles, writings and published drawings, has nonetheless exerted a deep influence on how leading members of a generation of architects think about architecture, and how their buildings sit within their wider social settings. In the Thinkbelt, Price outlined an ambitious project for a centre of higher education amongst the coal fields of Staffordshire. These pits originally served ceramics factories throughout the region but, by the early 1960s, had fallen into disuse – de-industrialisation came early to the Potteries. The landscape Price wished to regenerate spanned approximately 100 square miles, was triangular in shape, and stretched from Pitts Hill in the North, Madeley at its Western point and Meir to the East, with Stoke and Newcastle-Under-Lyme located at its heart. 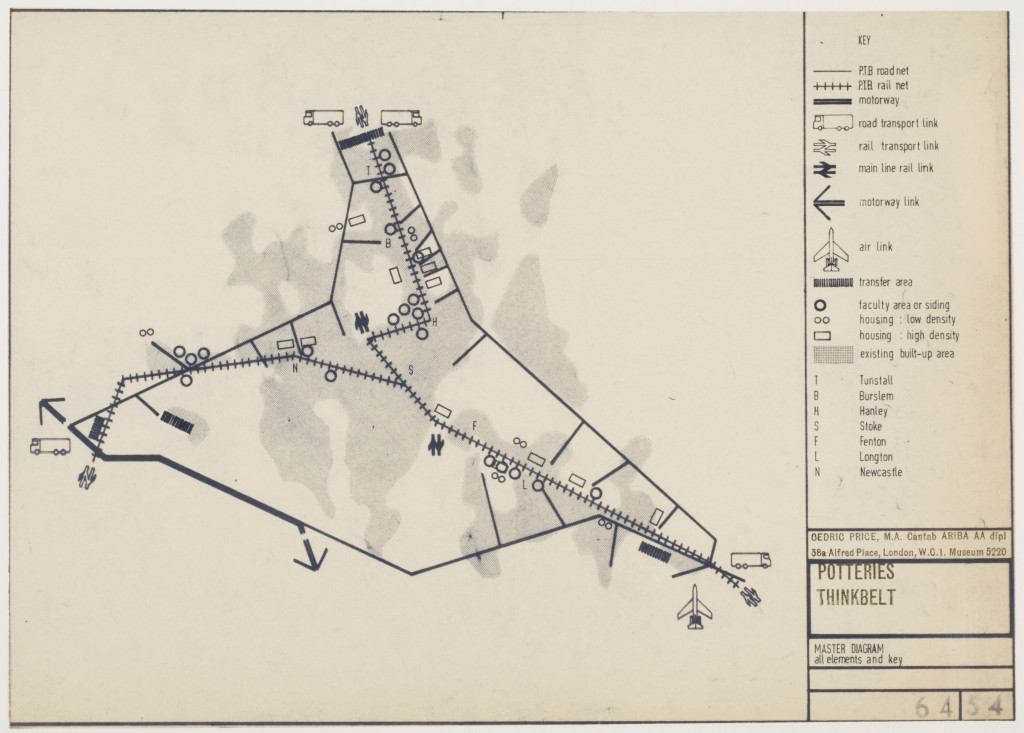 The Thinkbelt would connect to outside rail, road and air networks via transfer areas at the points of the triangle. Industrial units at these points offered campus sites that could be reconfigured according to differing uses – so, in addition to public learning spaces, these units would also offer accommodation for visiting students and staff. The transfer sites would be connected together by continuously running railbuses using the disused railway network that previously had connected the pits with the potteries; Price was interested in enhancing the efficacy of the already there. Furthermore, the railbuses themselves could be reconfigured as learning spaces so that teaching might be carried out en route, with fold-out deck units offering more space for larger lectures and talks.

Price envisaged the Thinkbelt as offering education for 20,000 students, following mostly applied curricula in engineering and science subjects. Indeed, the Thinkbelt was an industrial undertaking in large part; its remit included working with regional industries as research and design centres, as well as offering re-training in new industries for local residents whose work in the pits and potteries had disappeared. The Thinkbelt was designed for 20,000 students, but with provision for 40,000 residential units that were flexible in form and adaptable to possible relocation and aggregation; Price wished to see student housing combined with local council tenancies. The four different forms of residential units were crudely named as sprawl, capsule, crate and battery housing, using terminology specifically intended to irritate professional designers. 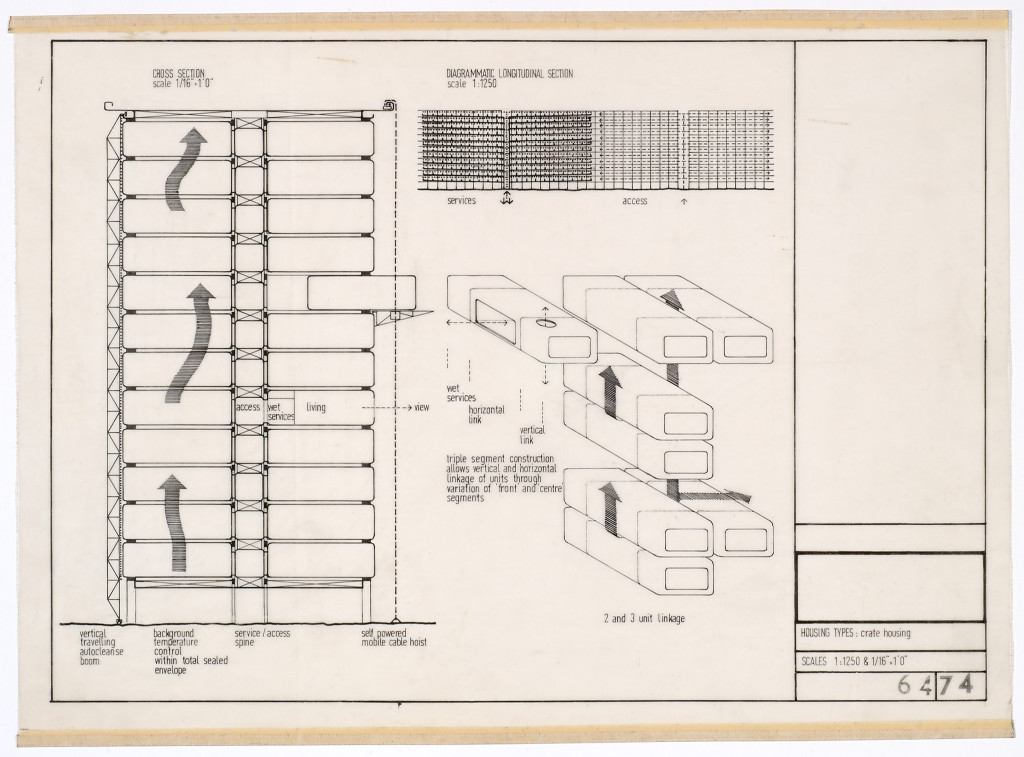 The Thinkbelt rejected previous and contemporaneous ideas about appropriate university architecture, with Price’s aesthetic citing industrial forms such as the container, rather than what he perceived to be the pretensions of twentieth century university buildings. Typically, he viewed contemporaneous campus designs as aspiring to the medieval form of the castle (ivory towers included), making defensive spaces removed from the rest of their towns. Price made a virtue of his avoidance of the design principles that characterised the university movement in both pre-war and post-war periods. ‘While students’, he wrote in 1970, ‘are at present one of the most mobile social groups of technologically advanced societies the nature of their own particular production plants – schools, colleges and universities, is static, intro-spective, parochial, inflexible and not very useful’ (1).

If Price cared little for university architecture, he cared even less for the principles of university education, taking care to avoid the use of the word in his scheme. Certainly his scheme for such a large cohort of students by contemporaneous standards worked against the exclusivity typical of the sector at that time; his preference for science and engineering spoke to the idea that education should be seen as serving wider societal uses, rather than purely for the fulfilment of individuals from elite social groupings. The Thinkbelt sought to correct an imbalance in the esteem paid to ‘applied’ rather than ‘pure’ knowledge, through an architecture which was functional, flexible and impermanent rather than ornamental, fixed in purpose and inert.

The Thinkbelt was to be a site of learning premised on patterns of mobility, at individual, collective and even infrastructural scales. This mobility, embedded within the physical buildings themselves, spoke to a wider understanding of the word in debates about meritocracy and the opening out of higher education to a part of the population hitherto under-represented. Price’s project was far-sighted in its emphasis on flexibility within the curriculum, planning for access through life-long and part-time learning and hence alive to the needs of student groups that, as Paul Stanistreet has suggested, are often overlooked in contemporary debates. Certainly the Thinkbelt anticipates debates about whom and what higher education is for, pre-dating current arguments about the value of a university degree in terms of the ‘employability’ agenda for the individual learner and the value of an educated workforce for national industries. Price’s analysis of the social value of higher education more generally is incisive; towards the conclusion of the New Society piece he makes the case for student loans to become salaries, arguing that where ‘people are doing a job society wants them to do, they must be paid for it’.

Moreover, the Thinkbelt prompts consideration of the disjuncture that can arise between the places where we work and where we live. The combination of student residences with local council tenancies sought to integrate the student experience with that of the wider population, disrupting preconceived ideas about the housing of students on campus accommodation away from residents of the towns and cities that give universities their names. Indeed, the Thinkbelt was written in the shadow of early tensions, noted in the article itself, between managers and students at Keele, and the University’s apparent disregard for the surrounding region. In this magazine, Mary Stuart has questioned how alive universities are to their civic missions – the Thinkbelt, for all its hypothetical aspects, gives us a benchmark for thinking through such issues. Are our universities supplementary to the cities and regions that give them their names and that sustain them economically? How do academics and students engage with each other? And how do we interact with our neighbouring populations?

The Thinkbelt is an experiment in conceiving of a different type of learning environment; think about the dynamics of a lecture in a moving rail carriage, and how it might bring staff and students into contact in a way that we can all too easily avoid in the stratified spaces we build into our campus lives. The Thinkbelt is premised on a different social and political settlement for higher education to that which we labour under today; in its own time, it did not attract the attention of policy makers, falling as it did by the margins of planning for the University of the Air – later to become the Open University. Yet its focus on place remains of interest. In returning to the Thinkbelt here, my argument is not that Price’s proposal offers us answers to our debates about the public role of universities today – there are too many questions around the complexities of academic freedom, architectural design and political context to claim that. Nonetheless, as Samantha Hardingham reflects, ‘if there is a use for presenting this material again, here and now, it may be to ask whether we are looking at something we already know, or looking for something we still cannot see yet’ (2).

Whether Price’s proposal can offer clues about a future we cannot yet see is interesting for a number of reasons, not least in raising the question of why we find it difficult to imagine our futures in quite the same ways, with quite the same optimism as he did. At the beginning of this commentary, I suggested that adopting a ‘willing suspension of disbelief’ might be useful in approaching the Thinkbelt; for Coleridge, the suspension of disbelief is necessary to enable what he understood as ‘poetic faith’. Poetry and faith – it strikes me that these are qualities too often missing from thinking about higher education, and its planning; by these I mean a belief in the potential of universities to actively shape socially just economies and societies (rather than accelerating the reproduction of inequalities, as Stephen McKay and Karen Rowlingson argue), and the lyrical licence to imagine how they might do this.

(1)   Quotation from ‘The Cedric Price Column’, a contribution to Archigram, Issue 9.

(2)   Quotation from Hardingham and Rattenbury’s Supercrit collection on the Potteries Thinkbelt – for publication details, see Further Reading below.

Daryl Martin is a Lecturer of Sociology, and Co-Director of the Centre for Urban Research (CURB) at the University of York. He has teaching and research interests in the areas of architectural theory, cultural geography and urban studies.