On the Frontline: Ethnography in a time of neoliberalised learning and teaching

As we return to the square in Valdmingómez, we see a man with his sleeve rolled up next to an orange tent: he stands up and moves a chair with the syringe hanging from his upper arm. Very damaged and thin women pass us from time to time with very heavy looks on their faces as they trudge up to the harm reduction bus. We decide to take a walk around the back of the church area. A metre or so away is the sleeping place of the man who we saw injecting the other day. Next to his rags, lay used syringes, piss stains and shit. Further on, mostly concentrated around trees or large bushes, are collections of injecting paraphernalia and evidence of fires having been lit…some ashes still warm in cinders from the night before. Behind the church, a man stoops to inject himself in the legs and even as we look, just behind the harm reduction bus, two cars sit full of people smoking heroin and cocaine. Around them, are small mountains of rubbish and a wild grassland peppered with more unwanted debris. [Field notes]

These notes are from our ethnographic study of Europe’s largest ghetto, Valdemingómez. Ten years ago, when I first heard about Valdemingómez – a deprived suburban area on the outskirts of the city of Madrid in Spain – I was immediately interested in it as a site for study. However, it was not until four years ago, in 2013, that my ambition to research it came a little closer when I moved to Spain to take up a job at a university. The neoliberalisation of our education system meant that from day one, I was expected to generate research income as a means of justifying my new position. After three research proposals to different government ministries were rejected, I decided I would do it anyway in my own time. I was fortunate because, at the time, I had just started to tutor a student who was also curious about studying the area for his undergraduate dissertation; however, he had no research experience whatsoever so I had to train him carefully in the research methods we were to use in this challenging environment. While the average cost of the proposed government projects was €55,000, my version of the research came in at a very economical budget of €1,000 which was spent on petrol to get there and back, and cigarettes as a means of currency in exchange for formal interviews. Aside from that all we had was our patience and ambition for research.

From the outset, I can say that the desolate misery we witnessed over this period, captured aptly in the field notes above, is related to people being casualties of various social, political and economic processes which, over time, have been internalised and reproduced in a destructive form of drug use which compromises their own health and wellbeing. In this area they work/live side by side with ‘gitanos’ (Spanish Romani) – seen as another socially-redundant group – who traffic drugs in large quantities and habitually inflict suffering and violence on them. Both groups are also regulated by corrupt police forces, and are assisted on a daily basis by the limited intervention of the “Agencia Antidroga” (Anti-Drugs Agency) or “harm reduction team”.

When we first went to Valdemingómez in November 2014, we found it difficult to believe that a place with such multifaceted social problems had only received piecemeal academic interest given that it has been Spain’s main drug dealing site for 20 years: a sign perhaps that the methods we used to do this study are becoming defunct in the neoliberal era and that our discipline is disappearing into the internal ideological politics of satisfying our seniors by getting money for university coffers and publishing in high-impact journals to gratify our own sense of importance.

In Spain, qualitative methods are rarely used in criminology and ‘ethnography’ is just a word read in silence in text books. However, there is an alternative and in this research we showed that if really we want to get to the heart of a social problem – especially one which concerns the sharpness of poverty and inequality – we simply need to get out of our offices and abandon standardised ways of researching, moulding ourselves to some degree to the realities under investigation.

In the resulting study, published recently by Policy Press as Dead End Lives: Drugs and Violence in the City Shadows, we spent two years with homeless drug addicts, studying how the space in which they occupy came to be, how they had come to find themselves in this area, and what daily life was all about for them. We documented their lives, took photos where they permitted us to and demonstrated sensitivity and empathy to their circumstances. This was not easy in the slightest. The area is controlled by powerful gitano families who are unafraid to use firearms and do not hesitate to ward off potential threats with force – even if many disputes and violence take place between them. Their homes as well as the kiosks and fumaderos (drug dens) are secure places and almost all families have firearms.

Add to this high levels of mistrust about strangers or new people who come to the area, which is amplified by the general caution the gitano community have towards people who do not originate from their culture. There is also the ever-present threat of disputes and violence between the drug users, and public fighting is common, which is why a few cases, they too carry weapons from knives to guns; if not, then among the rubbish are improvised weapons that they can find in the surrounding area such as broken bottles or metal bars. Naturally, the fact that they possess these artilleries is amplified by their fragile mental states and varying levels of paranoia and anxiety, which are triggered by the relentless use of heroin and cocaine. This is further increased by the corrosion of their mental, emotional and physical state over time coupled with the physical risks of disease and from strewn paraphernalia all around the site. 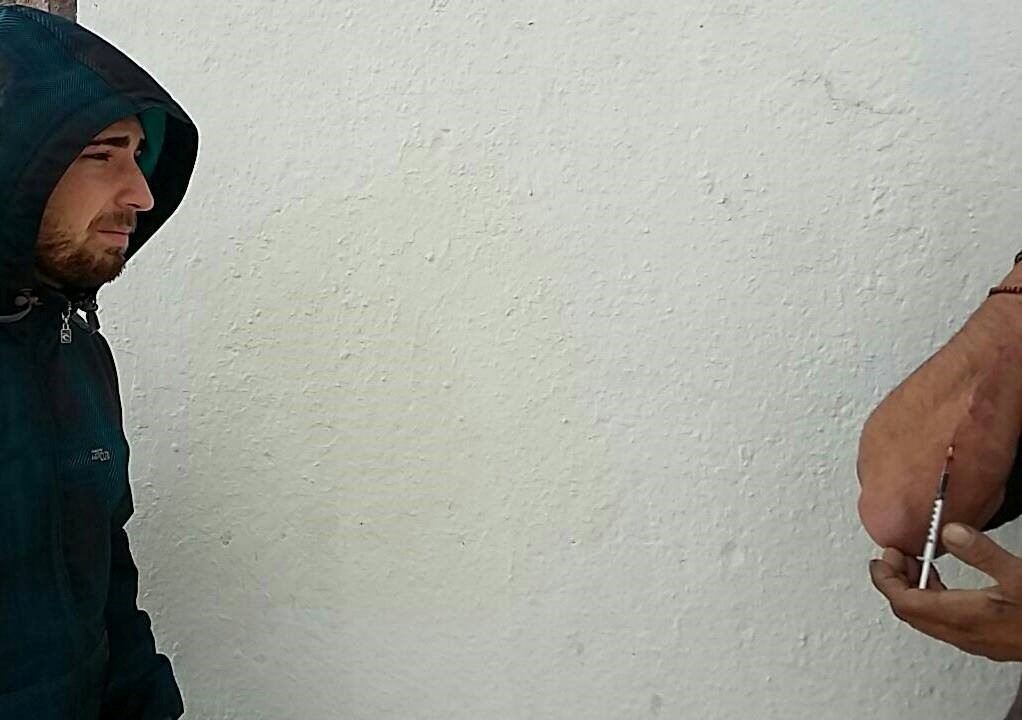 This was certainly not your average study given these risks. It probably shouldn’t have happened in the first place and the fact that the government would not fund it was a good indicator this was the case. Thankfully there is no such thing as a Research Ethics Committee in Spain so we were saved the pointless bureaucracy of filling in a long form which would have been read by people alien to ethnographic research and avoided the need to justify our fieldwork approach by dumbing down – perhaps even lying about – the potential risks to which we were we exposed. We therefore took what measures we could when it came to our own safety and that of our participants and anonymised names and identifying aspects of our participants’ identities. We offered no money to our participants, giving them our old clothes, shoes and cigarettes from time to time as well as helping them out when they most needed it. When formal, recorded interviews were done, as a gesture of goodwill, we offered them a pack of cigarettes and while in general this was accepted, often they turned it down, preferring to talk without receiving anything. Our questioning style was informal and empathetic. The main interview period in our two-year study lasted six months, from November 2015 to May 2016 the following summer and it was this process which cemented our trust with the research population, to the point where we could arrive at the area, speak to them with no fear, and be privy to intimate thoughts before, during and after drug use had taken place.

To complement this data collection, we also undertook a series of interviews with police, harm reduction workers, educational and drug experts, and gitanos. The topic of these interviews broadly covered the changes and organization of the regional drug market as well as the ones local to Valdemingómez, gitano drug operations, social and criminal policy with regard to drugs in the city, as well as processes of addiction and recovery. These interviews allowed us to contextualize drug use and attitudes to consumption, experiences of violence and victimization and in general provide a more holistic picture of the social scenery of Valdemingómez.

I think this is the way forward for the social sciences. The neoliberalisation of our jobs has made us obsess about our academic status, subservient to demands by the institution to publish in prestigious journals, and compete and bicker between each other, greedy for more publications, become envious of each other’s activities, lusting after the glory of media interviews and invited speeches, only to have a proof of it all captured in perfect images of ourselves and uploaded onto online forums so that we can collect the praise that is due. How good it feels for our egos? In the end though, if we can see the ideology constructed in past around our job roles and all the hype related to publishing, citations, conference keynotes, we should realize that we need to be working for the people we research and that means finding ways to study accurately their circumstances and translate that to our students. We can even involve them in our studies as I have done.

Note:
(1) Not only because we had no budget for it but also because it would have attracted the wrong form of attention to our presence. Had we declared we were paying people for interviews, we would have simply attracted people just so they could get money and we knew this from experience.

Daniel Briggs is a researcher, writer and inter-disciplinary academic who uses ethnography to study social problems. His books include: Deviance and Risk on holiday: An ethnography of British tourists in Ibiza (2013 Palgrave MacMillan); Crack Cocaine Users: High Society and Low Life in South London (2012 Routledge; The Consequences of Mobility (2016, Palgrave MacMillan); Riots and Political Protest (2015 Palgrave MacMillan), Culture and Immigration in Context (2014 Palgrave MacMillan). He edited The English Riots of 2011: A Summer of Discontent (2012 Waterside Press) and La Criminología Del Hoy y Mañana (2016, Dykinson). He has just completed a book on Spain’s most notorious drug market