The New Hardwoods of Brazil

The Brazillian country side is being filled with eucalyptus. Originally introduced to Brazil in 1910 for timber and for the charcoal industry, the accelerated industrial development and the growing importance of steel production and exports, led by successive governments, has made eucalyptus an increasing factor in the deforestation of the Cerrado, the Brazillian savanna, the Atlantic Forest, and even the Amazon forest basin itself. International steel companies buy large portions of land and substitute the natural vegetation by transgenic eucalyptus trees, a fast growing kind of tree used to make charcoal, itself used to improve the quality of pig iron and steel. Brazil today produces about 10 million tons of pig iron using charcoal, 60% being exported, generating an income of US$ 2.0 billion per year.

While attention is given to the climate effects of iron and steel production, the impact of eucalyptus has received less attention. In principle, the use of plantation charcoal leads to a carbon neutral process, since the CO2 generated in the steel production can be offset by the plantation and the growth of the trees. But in a study published in Nature Climate Change, scientists have demonstrated that emissions from Brazil’s steel production doubled in the 2000-2007 period, despite a decrease in the use of coal.[1] Furthermore, eucalyptus has a high impact on the environment caused by its fast growing nature and the fact that it consumes high levels of water and nutrients leaving the soil dry and exhausted.

I’ve been working in regions affected by these monocrops since I became a professional photographer. The extensive and visually expanding areas of eucalyptus has always concerned me because of the environmental and social impact it brings with it. It has changed not only the landscape and topology as a whole, the scope of natural resources, economical activities, and the amount of water required, water preservation is now becoming a global issue in its own right. I have walked a lot inside these fields over the last 14 years and used photography to consider the many questions that these plantations raise. More recently I passed through a road surrounded up by one enormous eucalyptus field. It was here I saw the opportunity to make a representative image of this situation, of something that is disappearing from these landscapes, and both the present and the likely future: that is to say, a landscape transformed by eucalyptus clones. 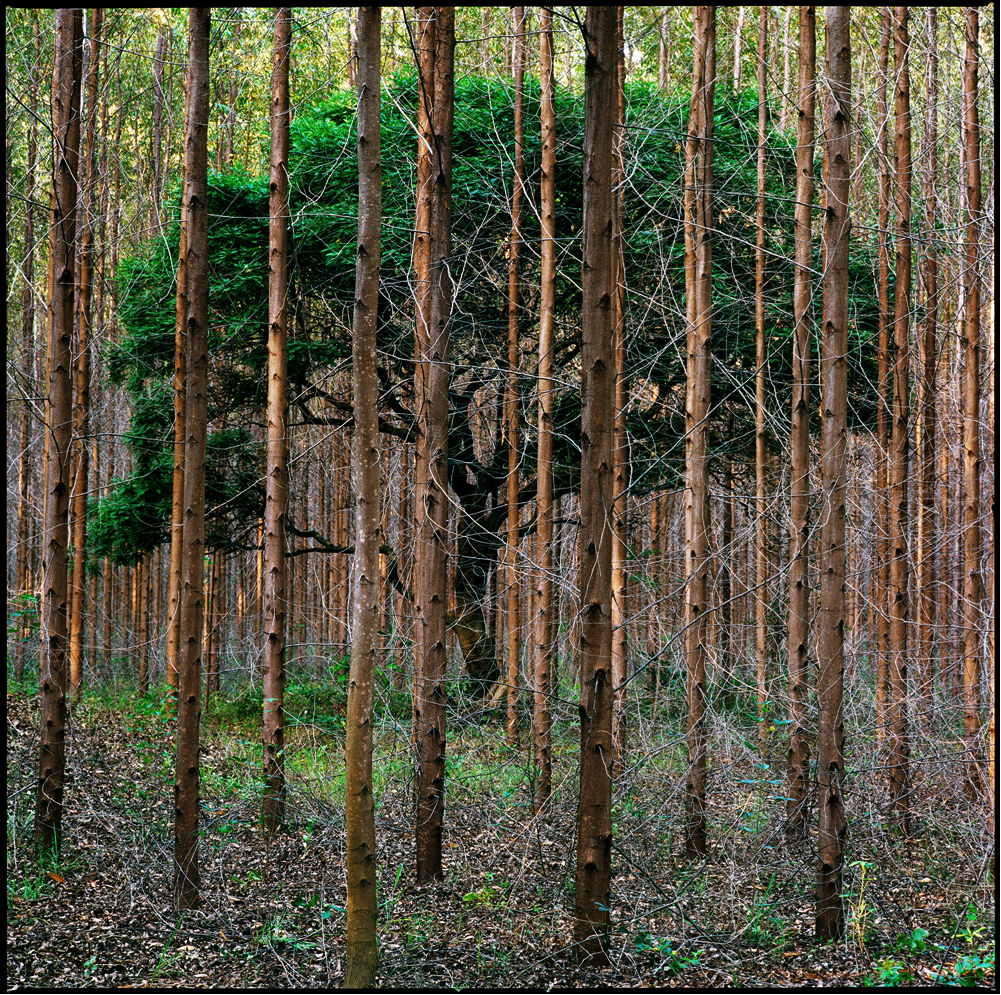 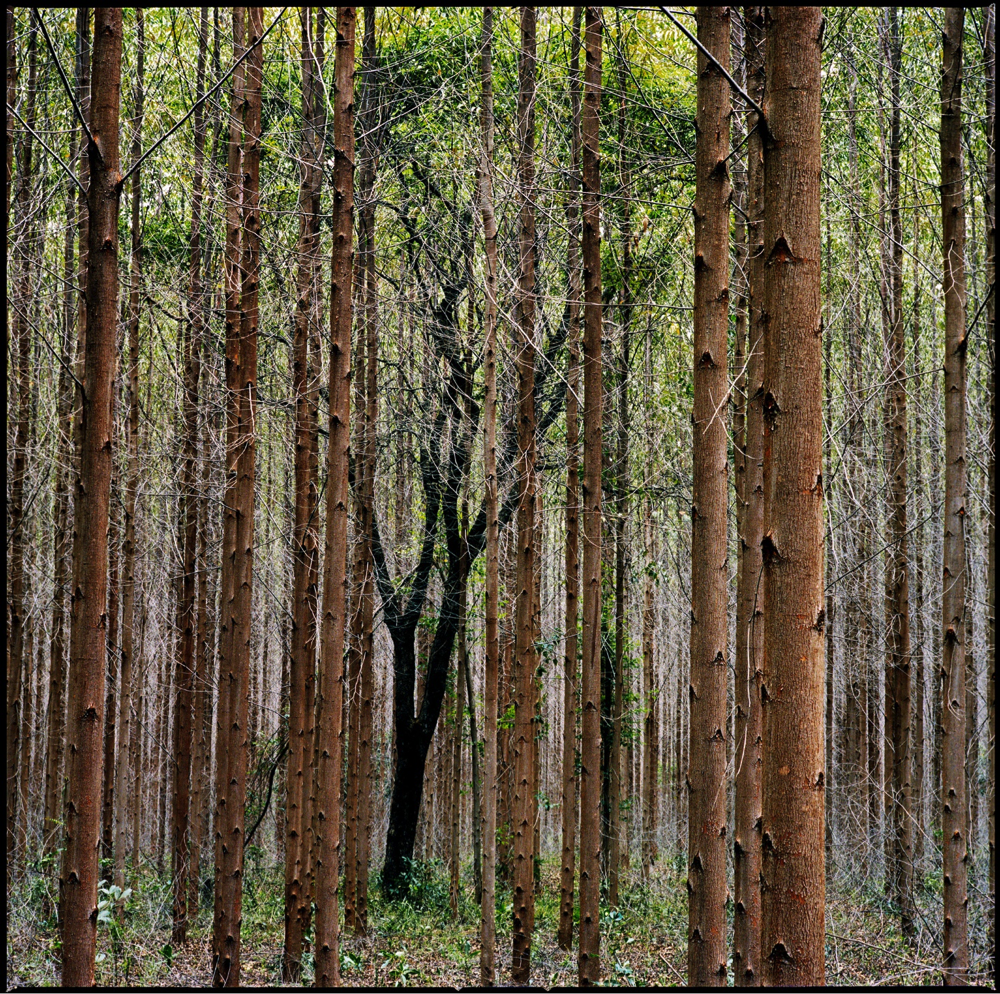 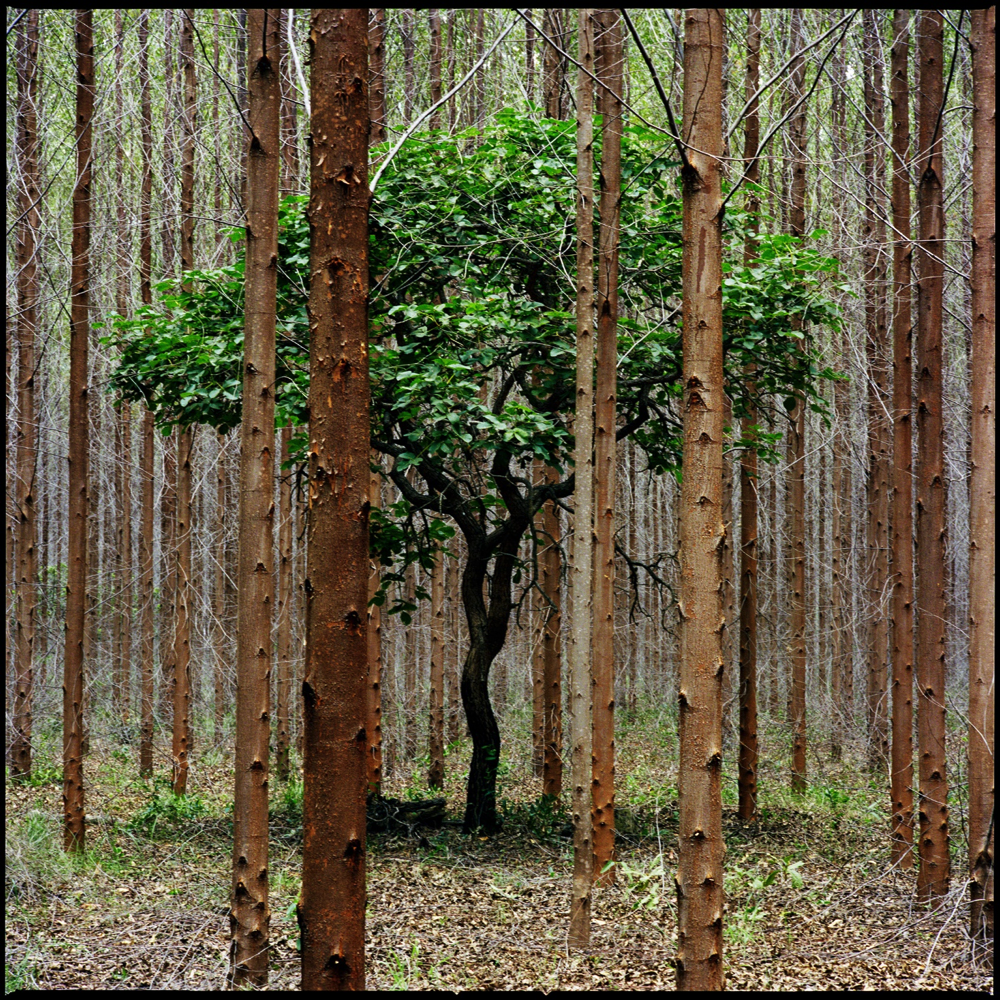 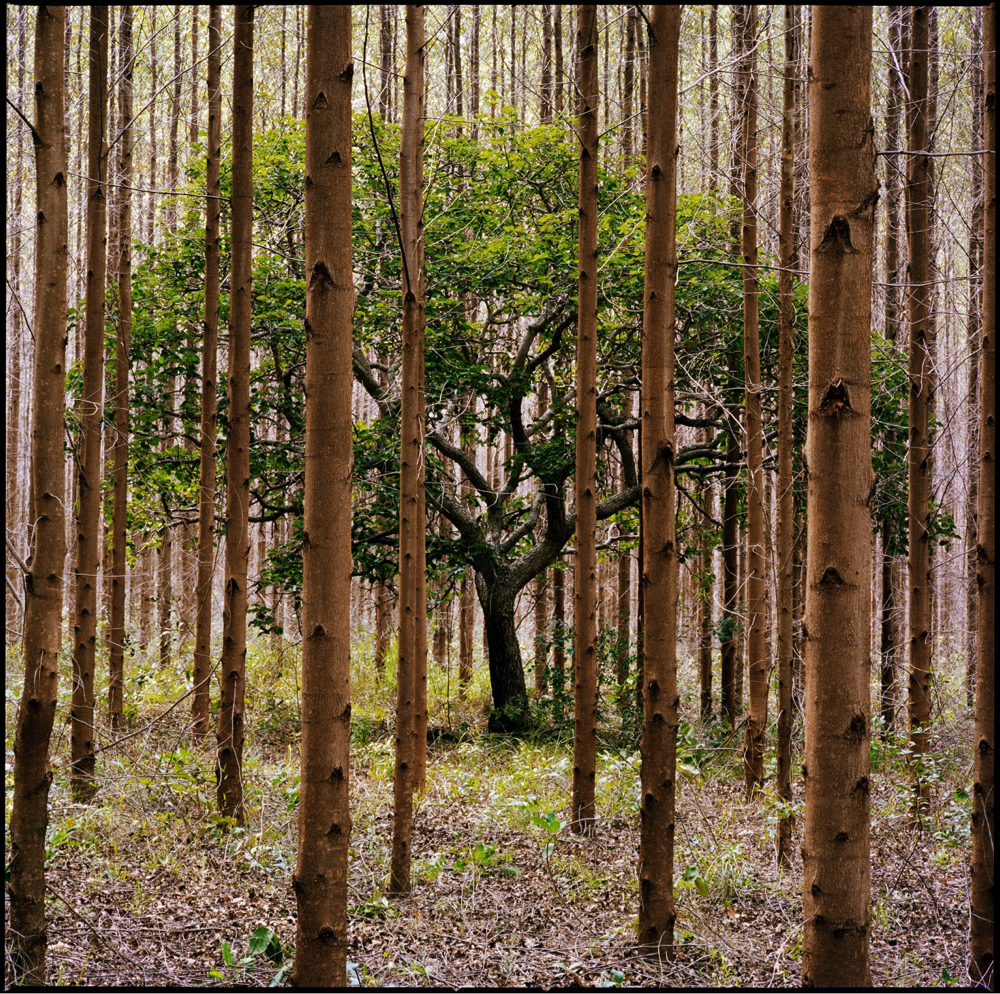 Such images might be used to sensitise the Brazillian people to the problem of these and other types of monocrops. The intention though is not entirely documentary as I see these photographs working in a symbolic way. It seems, when viewing them, that people feel something beyond the direct meaning of they contain, such as identification with the encaged lives of these native trees, struggling to survive in an artificial, oppressive and vanishing world. So I believe that the social dimension of this series goes beyond the facts depicted in each image. The native trees inside these uniform and artificial fields immediately lead the viewer to the environmental problem, but I think that they don’t stop at this point. People get emotionally involved too; they think about the title of the picture, some even have a sensation similar to suffocation, and follow their thoughts to conclude that they too are living within a very strange, artificial and oppressive environment. 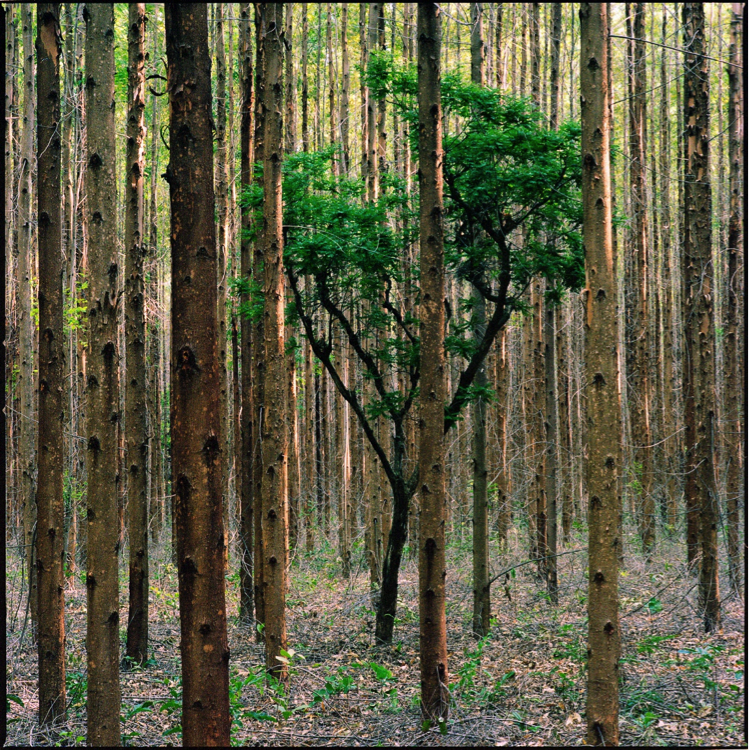 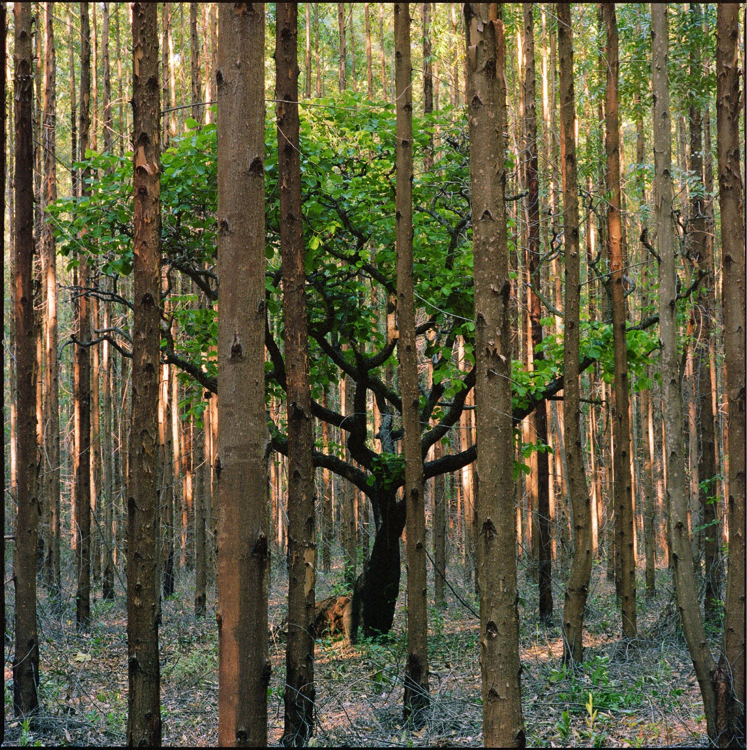 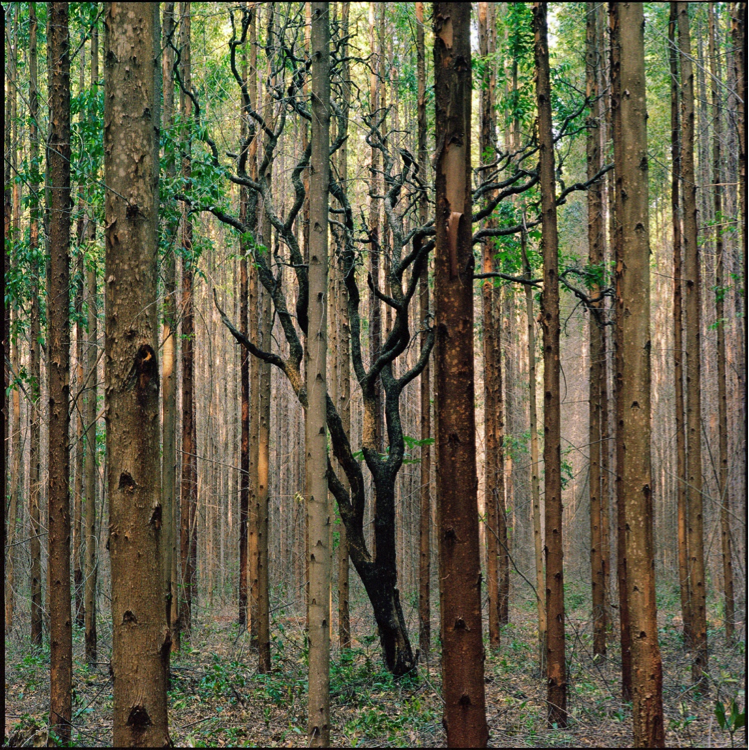 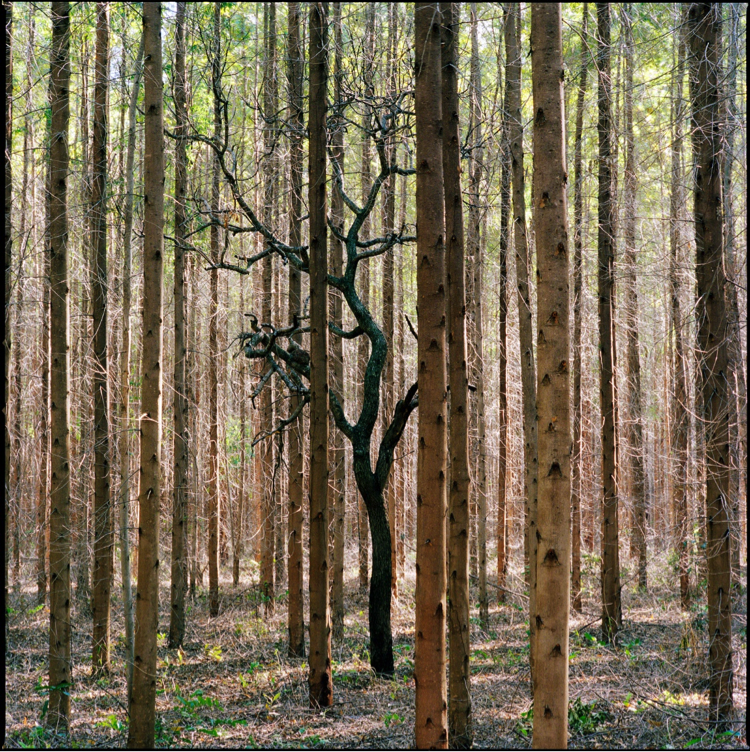 This kind of reaction is my goal in each work I make. I see art as one of the spheres that forms a bigger picture of society. In fact, I don’t see art and society as two different things. In my point of view, art is included in society, and is ever social, as one, or several, forms of communication. It’s particular significance is that it differs it from the other forms of communication, such as the newspapers or television, through its freedom of language. It is something that can be understood in different ways but at the same time renders the possibility to transmit feelings and wider and subtler kinds of expression than the written or spoken word, at least when this too is expressed in a factual or documentary sense. 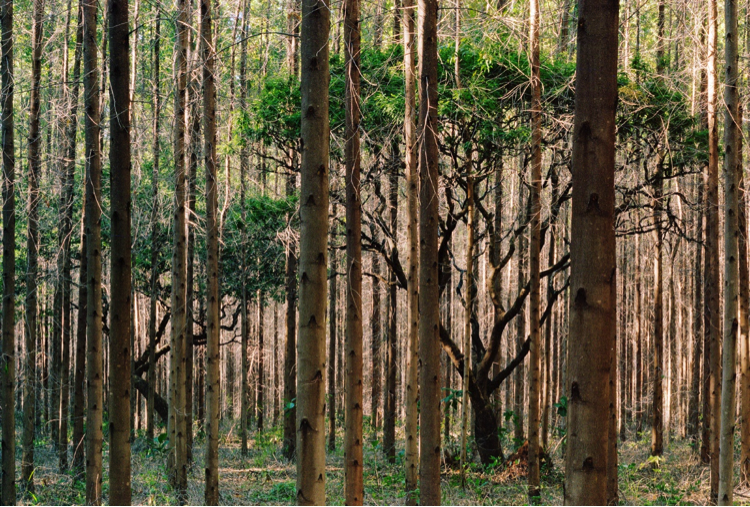 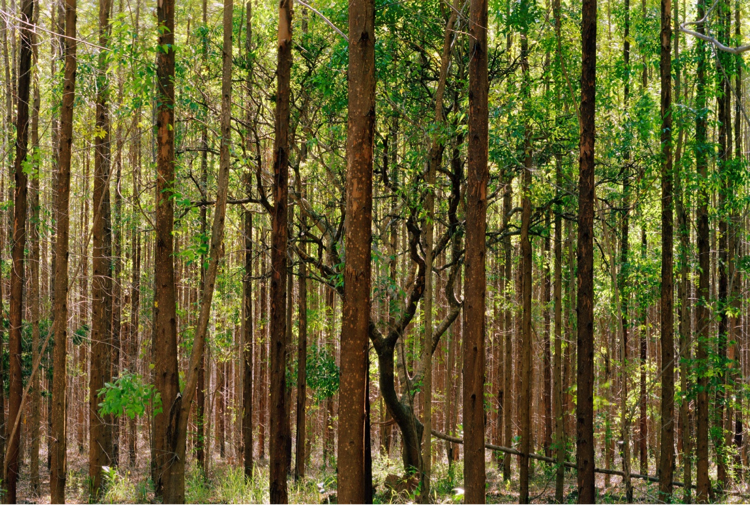 Art’s freedom of language is infinite. It comes from the artist and is passed to the spectator, who has the possibility of multiple interpretations of the artist’s “message”. It means that the art viewer will also transform the work, and even engage in a different way of thinking, and, for that matter, living. In this way it gives an important social aspect to art and its transformative capabilities. Art’s role, I find, is played by the mingling of several voices at the same time. And so, for me, art is an important part of being in society, since it offers a different point of view of both the problems and possibilities of human existence.