Fight them on the beaches: Engaging the Populus

Have you ever marvelled at the Red Arrows acrobatics?  Or been proudly awed with a hairs-rising-on-the-back-of-your-neck moment when attending air show displays of power?  Or respected the steadfast Spitfires and Lancasters rolling back the nostalgic years, whilst the Tornadoes boom their contemporary warnings out from these shores?  Whether seen from holiday beaches or military aerodromes, demonstrations of air power have not lost their ability to stir the hearts of children and adults alike.

But there is no such thing as a free airshow.  These demonstrations of might seek a subtle payment.  By cleverly mixing thrills with acknowledgement of past victories, combined with patriotic colours and loud simplistic thunder, their receipt is endorsed by admiration, support and thanks from the wider populus.

Photographer Melanie Friend has interpreted the underlying price of this exaltation through Bradford’s Impressions Gallery touring photographic exhibition, with an accompanying publication, entitled The Home Front.  Using images of people and planes in seascapes and over land, she highlights interrelated issues of recruitment, technical hero-worship, some gender indifference, national pride as well as just touching on remembrance. 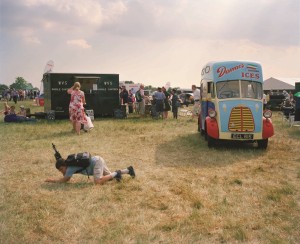 What are we to make of these, amongst the deafening roar of the flypast?  The following presents some well-known and some less known observations on the social effects of this ‘noise’, based on both Friend’s ideas and more.

There is the ‘toys for the boys’ issue, whether those boys be young or old.  To the grown-up boys the shows may be more about the technology, both planes and cameras (as Friend shows with an array of expensive photo equipment being used). Also, while one weekend such boys may be at an airshow, the next weekend those same zoom lenses could be in action at displays of tanks or trains, boats or racing cars. The male bonding/competition paradox comes into play too, as the day out offers opportunities to show off camera gear and to converse pseudo-knowledgeably on apertures, aeronautics and airshows-I-have-attended.

The girls don’t have much of a look in, except in a reluctant sense. The mothers seem to play a paradoxical role, bored on the one hand but apparently tolerant of their menfolk and boyfolk having a good day out.   One exhibition image shown is of a mother totally engrossed in reading a book whilst all around her the male telephotos shoot the sky. 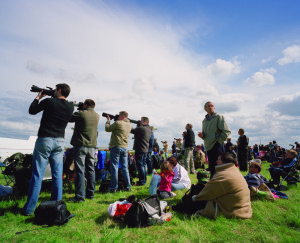 In total contrast, in another image a mother seems full of pride when videoing her young son dressed up in helmet and military fatigues.

Do such women accept the quite blatant ‘catch ‘em young’ recruitment angle and only worry much later when their boy gets called to active service?  Or do they endure it as a phase of growing up hoping that it will pass, but still generally support the military and thereby rely on other mother’s sons to do the risky military engagements?  What has been investigated on this tricky gender angle?  Not much I suspect.

What are rarely, if ever, seen at these public relations exercises of the delivery systems of the military are the havoc-wreaking projectiles of bombs, shells and bullets.  That is also true for the military museums.    The mechanisms yes, the slug no, not even for nominal display purposes.  The reason is a good marketing one because humans, young and old, may otherwise raise awkward questions about what happens when, and who, those projectiles hit.  Indeed, all advertising, military and otherwise, tries to keep the recipients eyes and ears firmly on the intended message and away from probing.[1]

One toy that is currently available over the counter gives the lie, in a small way, to this no-projectile-showing.  Looking exactly like a bomb, this small rugby-ball sized rubber item can be thrown into the air and makes a terror-sounding whistling shriek as it falls to earth, mimicking the real thing.  Perhaps private enterprise is filling a gap in the young boy toy military market (or is it also for dads?).

A wider social observation may be called a ‘Red Square’ moment.  It is well known that Russia and some other countries have military displays which send messages of might to both domestic and foreign peoples. In the UK one can hardly imagine Trafalgar Square or The Mall being used in the same way, but it is done more circumspectly.  For example, at national events there are flypasts over Buckingham Palace, and the eighty or so airshows annually across the country dramatise the power in the sky.  There are naval reviews demonstrating sea power.   There are army regiments granted the right to march ‘with fixed bayonets’ through cities.    These messages intertwine spectacle and strength for those watching at home and abroad.  Such heavy hints are also sent to government as each of the three defence services wish to maintain their importance, particularly in times of financial stringency.

Another aspect of national pride is linked to nostalgia and to war-winning.  The Lancaster bomber and Spitfire fighter of World War Two appear in Friend’s exhibition.  Also, whilst not in that exhibition but in a newspaper image from mid-2013 is a Lancaster re-enacting the 70th anniversary of the dambusters by flying over the reservoirs where their war training had taken place.   So together those planes of ‘the few’ and ‘the dambusters’ historically combine to very powerfully remind people of success against the odds. These even eclipse, to a certain extent, the continuing controversy of the resultant wartime civilian drowning and bombing.

As an aside, a small part of this discussion on air shows may comment on the impression that we are still in awe of humankind’s apparently gravity-defying achievement of flight.  Flying is only around a century old, and for popular air travel it is only just over half that time.  So unless one is living near a take-off and landing zone, we still seem to wonder at flight (‘look, there’s a plane up there!’) and when on board feel a frission of excitement tinged with fear when the plane surges forward at take-off.

The issue of remembrance generally plays no part in any display of military power.  However, Friend touches on this with her last book photo, in a distant image of the Red Arrows emitting a combined white vapour trail, sweeping downwards in a long, majestic arc while in the foreground is a large and colonnaded urban war memorial.  A restrained reminder.

Where is the future of all this in social impact terms?  Will dramatic shows of air power still persuade the wider populus to look up from seashores and symbolically feel they can ‘fight them on the beaches’?    Perhaps with the greater expense of pilots and aircraft, in contrast to the cheaper unmanned but physically unattractive drones, the military component of airshows will gradually decline. Or instead will there be ‘vicious’ drone dogfights to play to popular ‘roman arena’ feelings, thus continuing to attract adults and children to staff and support the island nation’s defences?

1 See the report by David Gee (2007) on informed choice in armed forces recruitment.

Peter Nias is an Honorary Visiting Research Fellow in Peace Studies at The University of Bradford.  He was formerly at The Peace Museum, Bradford.  He writes in a personal capacity.

Melanie Friend is Senior Lecturer in Media and Film Studies at the University of Sussex. The exhibition was first on show in Bradford’s Impressions Gallery from 14 September to 23rd November 2013. It will next be shown at Durham Light Infantry Museum and Art Gallery 28 June to 21 September 2014. For more information contact: enquiries@impressions-gallery.com.  The full colour hardback publication of the exhibition, The Home Front, is introduced by Hilary Roberts, Head Curator of Photography at the Imperial War Museum and includes an essay by Pippa Oldfield, Head of Programme at Impressions Gallery, Bradford. Published by Dewi Lewis Publishing in association with Impressions Gallery. Available to buy at: www.impressions-gallery.com/publications.