Karen Rowlingson, University of Birmingham, and

The concept of ‘financial inclusion’ first emerged on the British policy scene under the New Labour government from 1997 onwards as part of its broader mission to reduce social exclusion.  In particular, the Financial Inclusion Taskforce (2005-2011) placed the issue of financial inclusion high on the public and policy agenda.  But the success of policies to tackle financial exclusion is currently at great risk of being reversed as the Great Recession is placing huge pressures on household budgets and Coalition government policies fail to take the financial inclusion agenda seriously.

According to Elaine Kempson and Sharon Collard, a financially inclusive society would be one in which everyone had the ability to:

Underlying all of these are three key components to achieving financial inclusion.  The first is for people to have a secure income which meets a minimum standard.  The Minimum Income Standards Team at Loughborough University define  a minimum income standard as covering ‘more than just food, clothes and shelter. It is about having what you need in order to have the opportunities and choices necessary to participate in society.’  The second key component to financial inclusion, and the one given greatest attention in debates on this topic, is the availability of appropriate and well-regulated financial services, particularly transactional bank accounts, savings accounts, affordable credit and insurance products.  Finally, a financially inclusive society would be one with easy access to free and appropriate advice and education, particularly for those with debt problems.

The recession has, of course, had a major impact on the first of these components: the ability to secure a minimum income.  Around 2.5 million people have been out of work since 2008 (see figure 1) and one in ten workers now defined as ‘underemployed’ (eg working part-time but actively seeking more hours of work). 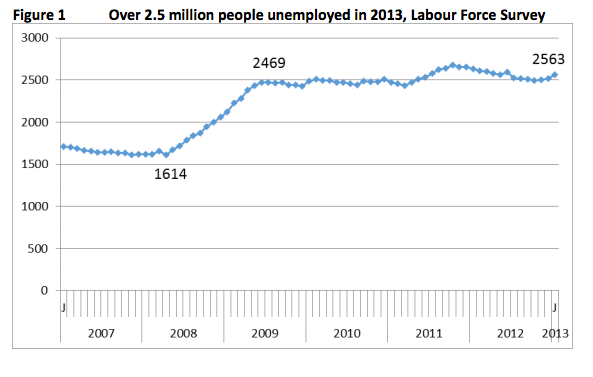 The growth of ‘zero hours contracts’ has also increased wage insecurity.  While the recession has played a major role here, there is a much more long-standing and fundamental squeeze on wages which began in the mid 1970s as the share of national wealth (GDP) going to profit increased at the expense of wages.  The decline in wages continued more recently with the real value of workers’ wages in 2012 falling back to 2003 levels.  The stagnation if not decline in wage levels has been experienced by the majority of workers but a few have seen their incomes, and wealth, increase dramatically, as inequality shot up, particularly in the 1980s.

Wage stagnation and inequality is only part of the story, of course, as social security benefits, the ‘safety net’ in times of economic difficulty, are also being cut back as a result of Coalition Government policies.  The level of Housing Benefit payable to those social tenants (of working age) with more rooms than their family size would be deemed to require is being cut (ending the spare room subsidy, or introducing a bedroom tax, depending on who is talking). The rent that may be supported in the private sector is also reducing, meaning that such tenants may only receive support for the bottom 30% of housing, rather than the bottom half. There are myriad changes to individual benefits, and particularly disability benefits. So far, older people have largely been excluded from these reforms – including the introduction of Universal Credit, which may (in time) lead to a radical simplification of the support available. Most of these changes are for the future, or being introduced gradually from 2012 or 2013 onwards. So, as the Resolution Foundation argues, the squeeze on incomes is set to hit the poorest hardest in the next few years.

Given this ‘biq squeeze’ it is not surprising that, in 2013, most people (53 per cent) said they were cutting back on their spending.  Indeed, one in ten of those who were in manual work or were out of work were even cutting back on basic food items.  In 2010/11, 12 per cent of households were finding it either very or quite difficult to manage financially and a further 27 per cent were ‘just about getting by’ (a combined total of 39 per cent up from 28 per cent in the early 2000s).   At least half of those in the bottom thirty per cent of the income distribution are finding it difficult to manage, financially, or are just about getting by in 2010/11 (see figure 2). 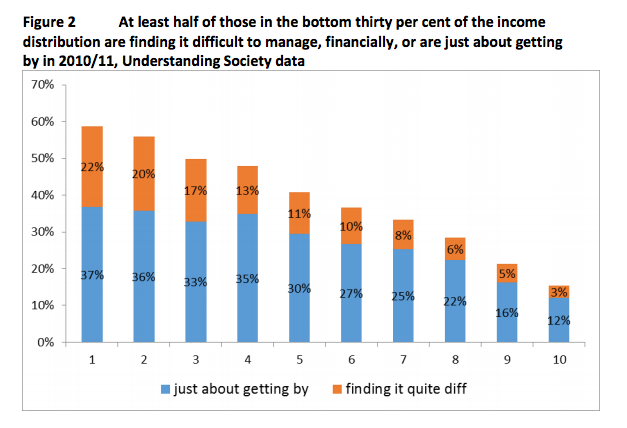 Times are incredibly tough and about to get tougher but what about government policies to increase financial inclusion through making suitable financial products more widely available?  One of the apparent successes of the Financial Inclusion Taskforce was to reduce the number of people without access to a transactional bank account.  In 2002/3, more than 2 million people lived in households without access to any kind of account.  By 2011/12 this figure had dropped to 770,000.   But there are still major issues about access to appropriate accounts and a report from the Parliamentary Commission on Banking Standards in July 2013  argued that the major banks were providing a very poor service to their very poorest customers.  The Commission therefore stated that if the banks did not voluntarily come to an agreement on minimum standards for basic bank accounts within 12 months the government should introduce a new statutory duty.  So there is still much more progress needed here.

Savings accounts are generally available to people who can save.  The problem here, of course, is that people on low incomes have very little capacity to save.  Having said that, in 2010/11, 20 per cent of those in the bottom 10 per cent of the income distribution were saving, despite being on such low incomes but half of these savers were putting away less than £50 per month.  Such savers receive very little encouragement to save compared with the tax breaks given to top-rate tax-payers with their Individual Savings Accounts (ISAs).  The previous Labour government was about to do something about this with a new initiative, the Saving Gateway, to provide some matched saving to those on low incomes but its planned introduction, in July 2010, was abandoned by the new Coalition government.  ISAs continue to receive government funding.

Without a cushion of savings, people have very little capacity to meet unexpected expenses, even relatively small ones.  About one in five of the population said, in 2013, that they would have to borrow money if they needed £200 at short notice – either through a formal loan (credit card, overdraft, loan etc – which may come at a very high cost) or through an informal loan from family/friends.  It is therefore no surprise that the amount of unsecured credit rose by 10.3 per cent from 2006/8 to 2008/10 (even before the recession began to hit).  And the proportion of people who found their unsecured credit commitments ‘a heavy burden’ increased from 16.2 per cent in 2006/8 to 18 per cent in 2008/10.  Overall, relatively few people use the new kinds of financial products that have raised concerns about very high levels of charges (according to APR calculations).   Use of payday lenders, in particular, may not be very widespread, but there are nevertheless major concerns about how they operate with the Office for Fair Trading raising concerns in 2013 about widespread malpractice.   The government is providing some financial support for credit unions but nowhere near enough to compete with companies like Wonga, QuickQuid, Moneyshop and so on).

At the very sharp end of financial insecurity, some people lose their homes.  In 2012, 34,000 properties were taken into possession (‘mortgage (re-)possessions’).  This, however, was a drop from the peak in 2010, due to low interest rates and lender forbearance.  Evictions from rented properties (‘landlord possession’) showed a different trend, however, with claims for possession reaching their lowest level around 2010, but increasing since then to around 10,000 in 2013

This is the longest and deepest slump in a century and we are already seeing signs of a major impact on people’s finances.  The situation looks set to worsen still further in coming years unless the government takes action to better support those who are struggling to make ends meet.

Karen Rowlingson is Professor of Social Policy and Director of CHASM (Centre on Household Assets and Savings Management) at the University of Birmingham. Steve McKay is Distinguished Professor in Social Research at the University of Lincoln. The authors would like to thank the Friends Provident Foundation for supporting some of the research on which this article is based