Being young in an uncaring city: the personal and the political in the lives of South Africa’s urban young people

Being young in Cape Town in the context of townships and informal settlements means navigating a city that isolates people from one another, and from themselves. This happens through structural inequalities that prevent young people from accessing jobs, education, adequate health care and leisure opportunities. Wider narratives about young people in Cape Town often position them as a criminal problem or an unemployment problem to be fixed. Young people’s isolation is amplified by high levels of precarity and violence which disrupt relationships of care in their lives. In this context, young people’s narratives and their experiences of care and its lack often become invisible.

The experiences below are drawn from two participatory creative research projects with young people from townships and informal settlements. The research processes underpinning each film were co-produced between the authors and the young people involved, drawing from participatory video and digital storytelling methodologies. The research was carried out over a period of more than a year, in partnership with community development organisations. Elsewhere we discuss our creative storytelling work in detail (Wheeler, Shahrokh and Derakhshani 2018; Wheeler 2019). Youth-led, creative and story-based research provides an important way to understand and learn from young people’s experiences, and to work with them towards change. Here we focus on the findings of this research in terms of how young people experience care in the city they live in.

Young people’s stories
In the film ‘Being Young in Delft’, made by a group of young people from the township of Delft in Cape Town, the character at the centre of the story has lost her parents and is rejected from school because she arrives late without her school shoes, which were stolen from her en route. The film shows how, at every point in the young person’s life, there is a foreclosing of options and a sense of loss and rejection, a lack of care. As shown in the following script excerpt, the young woman in the film is navigating an uncaring city: 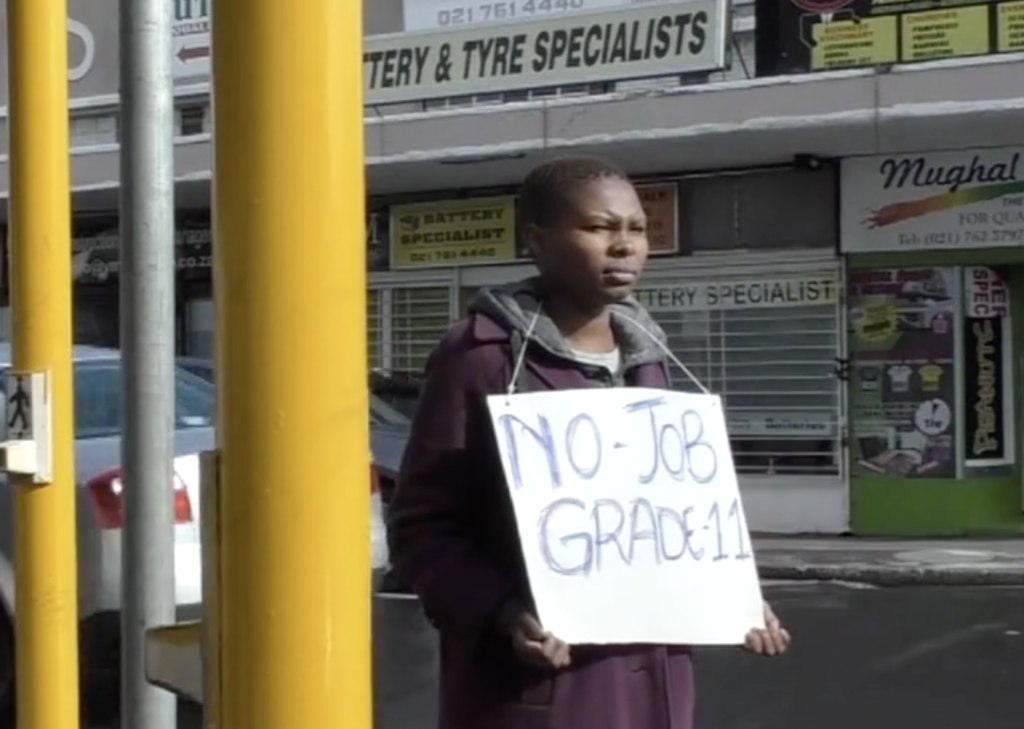 I missed my parents, they died when I was only 16 and I was torn apart inside. I had nothing to eat. I didn’t have anything but I was trying my best to go to school. I was devastated. I still went to school, but they chased me away. So I tried to get a job with the local councillor. Nothing. I went to the dealer’s house to try to get a job, just to earn something small. He told me that the only way I can work, was to join the gang and tomorrow they have a deal to do. I didn’t want to join the gangs, but then I didn’t have any other options anymore.

We see this again in Takudzwa’s (1) digital story ‘Finding Freedom’, where he experiences care differently across social markers of race, gender and, specifically in his case, nationality. As a young migrant, Takudzwa speaks of a life outside of formal institutions, and how he navigates feelings of being lost in a new city as his kinship relationships are fractured and fragmented. The following excerpt from ‘Finding Freedom’ speaks to the sense of loss and isolation he experiences: 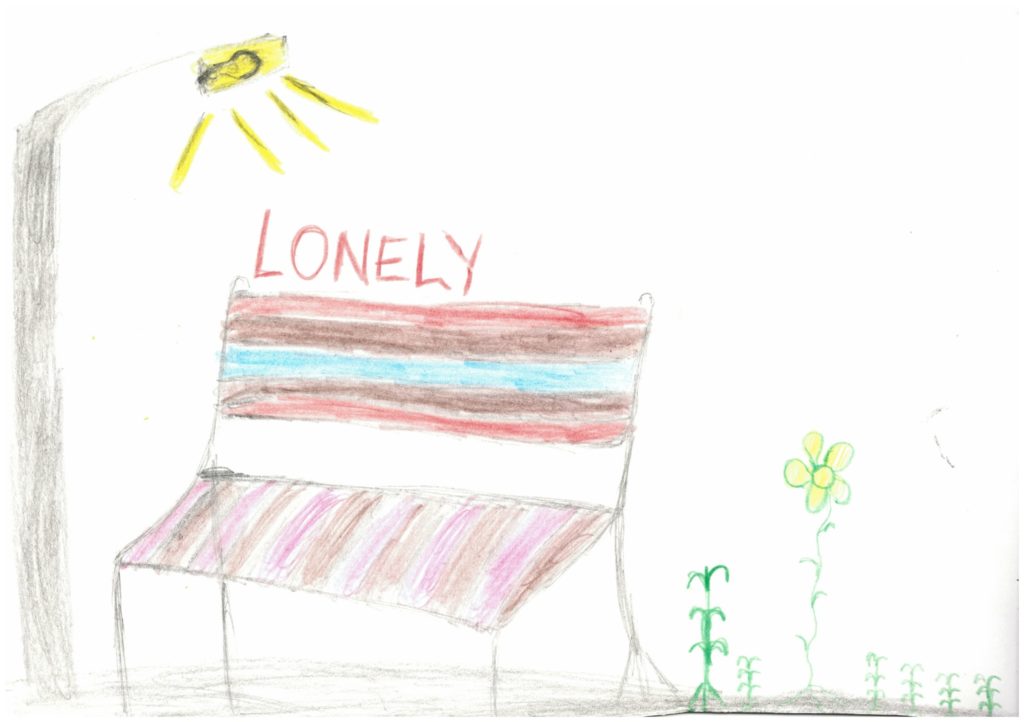 When I came to this country I was just a lonely bird. I had nothing except my siblings. We had nowhere to stay, just homeless, but I kept on pushing even though it wasn’t eas,y but I had hope telling myself that all things are possible… I found myself everyone gone, left as an outsider and being treated different from others and by my relatives…I have found myself walking not knowing where to go and I found myself in a lost city… I just  wanted to be lonely and my siblings would not know what was going on with my life.

Precarity and a lack of care
Our research has shown that for these young people, like many other young people in Cape Town, the absence of care is deeply connected to experiences of precarity. Precarity is lived as everyday violence, as exclusion from economic opportunity, and unequal educational and health outcomes (De Lannoy et al. 2015). It is driven by racialised legacies of apartheid that have excluded the majority of young people of colour (2) from public and political life. This precarity is underpinned by the violence of structural racism which manifests within schools, health services and transportation systems, and that is compounded by the perceived corruption within political processes such as how decisions about community safety are made (Delft Safety Group et al. 2014). As a result, relationships between people and the state have become fractured. The film ‘Being Young in Delft’ ends with the main character accidentally shooting someone in an attempt to gain acceptance to a local gang, and being sent to prison. The young people who made the film are highlighting the experience of so many like them, living in a city without institutions that care, where young people must individually manage the consequences of structural exclusions and fractured social relationships. In turn, the lives of many young people are cut short. In response, these young people from Delft made a statement about how they think their lives should be different. However, we are left with a sense that the obstacles they face are great, and that in light of the racialised structural violence surrounding their lives, in their view, the potential of the city to be caring is receding.

As a consequence of these dynamics in the city, young people feel excluded and alone. Attempts to build a sense of self-worth within this context, as shown by the attempts of the main character to find work, food, and love, are undermined by feelings of failure and of being forgotten. Similarly, Takudzwa’s experiences highlight the insecurity of relationships within precarious circumstances. After losing his mother, he is then abused and rejected by his aunt and separated from his siblings. He finds himself lost in a lonely city, feeling that he is treated differently from others. He explains that he feels he has to make himself ‘invisible’ because he is a migrant, and feels unsafe in his community and in relation to the South African state. He shows us that experiences of care –– or an absence of care – are deeply relational, and within a precarious setting these relationships are constantly changing and uncertain. Where feelings of loss, rejection and being seen as an outsider dominate, young people’s sense of self and connection to others is undermined. We can see from the lived experiences of these young people, that how we understand care in the city of Cape Town needs to engage with the multiple and intersecting inequalities that shape both personal and political experiences.

Listening relationships
Through the participatory and creative research approach, we explicitly encouraged young people to connect the personal and the political in their own experiences. We used a story-centred approach to do this, which helped young people to articulate deeply held experiences of exclusion and resilience from their own lives (Jackson 2013). The storytelling process facilitated the making sense of these experiences and, in turn, the taking of control over personal narratives by crafting them into stories. In a context of precarity, where young people navigate an uncaring city, the research process attempted to embody an ethics of care, working in solidarity with those affected. This involved decolonial commitments to democratising relationships, and protecting the quality of listening and recognition for each young person involved (Brannelly and Boulton 2017).

Doing these research projects as group processes contributed to new forms of solidarity and group identity. The development of ‘Being Young in Delft’, for example, built on a relational process of telling individual stories to find common themes and a shared framing. This, in turn, created the possibility for young people to present their films and stories in public events and fora. They worked to shift public narratives in South Africa to catalyse care and empathy from Cape Town’s institutions. Listening relationships between young people and public officials were formed which challenged their experiences of exclusion, yet, at the same time made the barriers to wider social change visible. Takudzwa became a part of a collective of young people facilitating peer support for young migrants in an effort to transform the spaces of care available in the city and to build belonging for young people like him that otherwise felt deeply alone. His efforts, with other young migrants showed how group processes that support care and empathy between young people can open the door to new understandings and action towards care in young lives.

We have learnt with young people that creative, and action-oriented research can provoke debate and discussion on the power inequalities that shape both institutional and intimate experiences of care. This understanding of the relational dynamics of care for young people within the precarity an uncaring city shows that policy and programming responses are needed that engage with the non-linearity, uncertainty, and complexity of the issue. Working at both the personal and political level created understanding of the structural violences that create uncaring cities. These insights became possible through a listening relationship within research with young people. By sustaining and expanding these relationships with policy makers, service providers, families and peers, the city can start to care.

References/further reading
(1) Research participants’ names have been anonymised.
(2) We use the term ‘young people of colour’ in light of the legacies of apartheid’s racialised  categories which continue to stigmatise and drive division within South Africa.
Wheeler, J., T. Shahrokh, and N. Derakshani. 2018. “Transformative Storywork: Creative Pathways for Social Change.” In Handbook of Communication for Development and Social Change, edited by Jan Servaes, 1–22. Singapore: Springer.

Thea Shahrokh: I have ten years of experience as a researcher and facilitator innovating in participatory methodologies, including arts and story-based approaches with people facing marginalisation to drive social change. My experience has grown through community-based participatory research partnerships in the UK and the Global South placing those most affected by social issues at the centre of research decision-making. I am passionate about working with young people in particular, whose powerful voices are often overlooked. My doctoral research with the Centre for Trust, Peace and Social Relations at Coventry University focused on young people with migration experience’s agency, identities and belonging and the construction of counter-narratives in South Africa. @TheaShahrokh Joanna Wheeler: I am a researcher, activist and facilitator in personal and collaborative story-based approaches. I use digital and art-based methods to help people express themselves powerfully. From the favelas of Brazil to the townships of Cape Town, I work directly with those affected by precarity to strengthen bottom-up responses to exclusion through creativity and expression. My work also connects the very grassroots to people making decisions: I’m working to ensure that policies respect the lived experiences of those who are not recognised or heard through the existing system. I have lived in four continents, and Cape Town was home for the last six years. I currently hold a Marie Curie Fellowship with the Centre of Trust, Peace and Social Relations at Coventry University on storytelling and political narratives of inclusion and exclusion. @joanna_wheeler

Image by the authors.

The articles in this special issue of Discover Society were written and are based on research conducted before the COVID-19 outbreak, and thus do not engage with the new lived realities of urban youth in a global pandemic. Yet we hope and believe that the discussions presented here will continue to be relevant in rethinking urban futures in the years to come.