ON THE FRONTLINE: Confronting Precariousness, Outsourcing and Exploitation – Lessons from the LSE Cleaners

On Thursday 8 June 2017, a largely unnoticed but significant political event took place in London: the LSE notified its decision to end the decades-long outsourcing of its cleaning services to bring cleaners back in-house. This meant conceding full victory to the migrant and BME cleaners who had been campaigning for more than eight months for equal terms and conditions with the in-house workers of the university (e.g. the academic and administrative staff). Organised into the small independent union United Voices of the World (UVW), the cleaners staged an unprecedented period of industrial unrest at the LSE that included seven days of strike action between March and June 2017.

Reversing the seemingly unstoppable trend of outsourcing and precarization of labour, at a time of stigmatization of migrant workers and weakening of trade unions, is, in and of itself, an historical achievement. What is more, the LSE cleaners won in a context of institutional hostility and great power imbalance, having against them the LSE, the cleaning company Noonan, and enjoying little or no support from the recognised unions.

Based on our respective roles as activist/campaigner and PhD student at the LSE (Louisa Acciari) and scholar studying the LSE migrant workers’ initiatives (Davide Però), we outline here some of the key factors that have made possible this seemingly unlikely victory, drawing lessons for analysis and future labour initiatives.

Articulating morally undisputable demands
One key factor for the campaign’s success was the cleaners’ ability to frame their demands in morally undisputable terms. In fact, at no point did the LSE try to challenge the validity of the cleaners’ demands, but only their feasibility and cost. The campaign argued that since the cleaners worked at the LSE, they should have the same terms and conditions as the in-house staff of an equivalent grade with regard to pensions, sick pay, holiday, and parental leave.

The emblematic case exposed by Mildred, a 60 years-old black woman from Jamaica suffering from back pain and a swollen knee, showed how the meagre Statutory Sick Pay scheme to which the LSE cleaners were entitled prior to their victory forced them to choose between their health and their wage. The demand for decent sick pay is so compelling, that it became counterproductive for the LSE to sustain its denial. Unable to silence the cleaners’ protest, the LSE tried to shift the responsibility for the dispute onto its cleaning contractor, dismissing the strikes as mere ‘noise disruption’. However, this move failed to shelter the LSE’s public image, as the exploitation of a BME and precarious workforce stood in obvious contradiction with the school’s reputation of world-leading research institution created for the ‘betterment of society’. 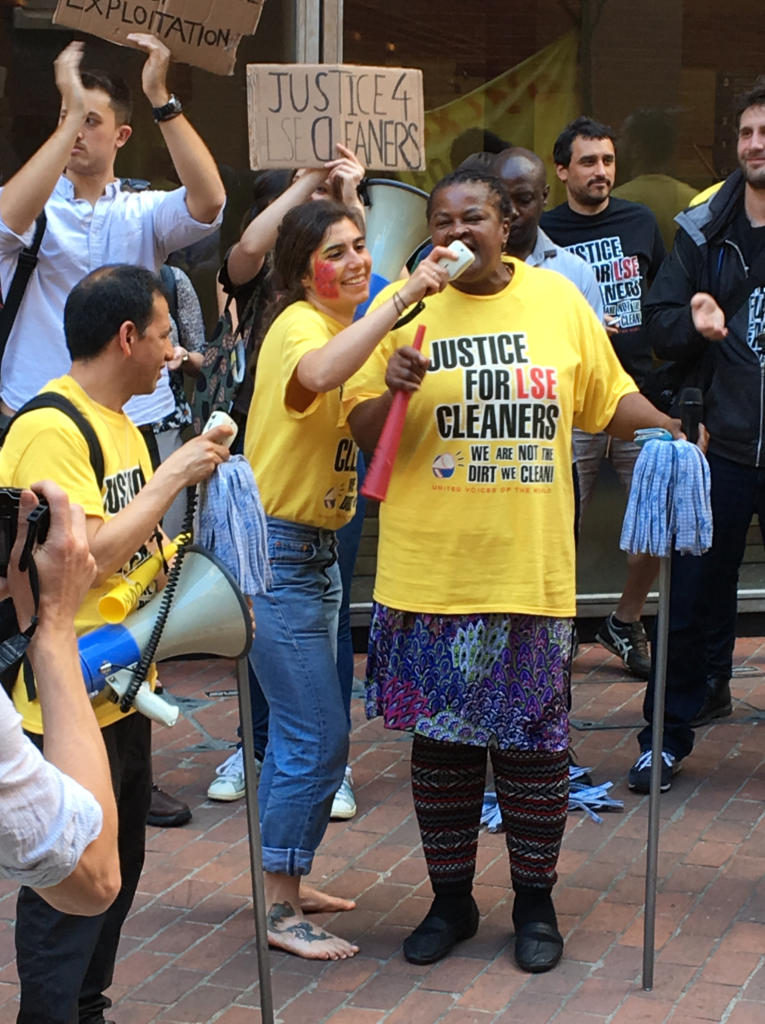 Then a major blow to this public image came from The Guardian’s columnist Owen Jones. After refusing to cross the picket lines to give an invited lecture at the LSE, Jones wrote an article that magnified the cleaners’ framing of the dispute as immoral and unjust on a much wider scale – a scale that for the LSE must have looked no longer tenable.

Building a community of struggle in the workplace
A second key factor was the ability to form a community of struggle based on an anti-essentialist ideas of class politics, uniting cleaners, students and some members of staff. This involved a highly active group of cleaners determined to fight not only for the above-mentioned material gains but also for a dignified and respectful treatment – as their slogan ‘we are not the dirt we clean’ symbolizes. This community of struggle also involved a few in-house LSE staff and above all a group of engaged students who developed the support campaign Justice for LSE Cleaners (J4C). Between January and March 2017, the students organised breakfasts for the cleaners at the end of their morning shift creating additional opportunities for socialising and sharing experience in what was an atomised and dehumanised workplace. These moments of coming together of cleaners from different buildings and shifts who had few chances to interact played a crucial role in building and sustaining a combative common activist identity between the cleaners and the students.

The various protests and marches jointly organised by the cleaners-UVW and the students-J4C further enhanced the visibility of the cleaners’ protest, thereby transforming the dynamics of power at the LSE. Suddenly, the invisibilized and seemingly docile precarious workforce that silently cleaned the LSE projected itself at the forefront of an unexpected, vigorous yet joyful industrial dispute. Students and staff alike were faced with their cleaners out of their uniforms, speaking publicly about the lack of justice, dignity and respect at the LSE. The picket lines became an important learning experience for both the cleaners who turned into political leaders, and the students, who, acquainted themselves with the harsh reality of their cleaners’ conditions. This also entailed a solidarist reversal of roles in which the students ‘serviced’ the cleaners and their campaign for equal rights at work.

Forming alliances beyond the workplace
A third key factor in the cleaners’ victory was the ability to scale-up the protest by building alliances beyond the LSE, an ability that increased the protest’s visibility in the streets and online. This scaling-up involved a broad and diverse platform ranging from feminist to artists organisations, from poets to journalists and bloggers, and from independent unions like Independent Workers of Great Britain (IWGB) to branches of the Fire Brigades Union. It also featured the slow but incremental support of the University College Union (UCU), which eventually passed motions of support first at the national congress, and then at the LSE branch, both including a contribution to the cleaners’ strike fund.

In the street, this scaling-up of the protest was facilitated by a strong element of fun. The picket lines were turned into festive moments where participants could dance zumba, make banners with artists, listen to poetry and live music, and take part in salsa-dancing flash mob occupations of the LSE’s directors buildings. Online, the campaign circulated petitions (e.g. against the surprising police presence on campus), and produced Facebook pages, while established bloggers and professional photographers documented every step of the protest. This combination of online and street presence, media attention, and broad-based alliances, contributed in making the cleaners’ struggle impossible to ignore.

Conclusions: On the wider significance of the LSE protest
Will this victory extend beyond the LSE? It is difficult to predict whether this historical win against outsourcing and exploitative conditions will be replicated elsewhere. However, SOAS’s immediate imitation of the LSE in ditching its outsourced cleaning services seems to suggest the LSE cleaners’ win may not be such an isolated episode. In any case, the cleaners’ protest at the LSE is of wider significance because it illustrates a particular approach to organizing and bargaining which has been highly effective and on the growth in the last few years. In fact, the cleaners’ win arrives on the back of a long series of significant victories that grassroots unions like UVW and IWGB obtained since their foundation only a few years ago (see for example the 3 Cosas Campaign, 100 Wood Street, the Barbican Centre, Sotheby’s, Harrods and HR Owen). Entailing a degree of irreverence towards the bureaucratized ways of conducting industrial relations in Britain – as these are failing to represent precarious workers’ interest – the approach deployed by the cleaners at the LSE is likely to be travelling beyond migrant workers circles to precarious workers more generally. Watch this space, this journey has just begun.

Louisa Acciari is a PhD student at the Department of Gender Studies at the LSE. Her research explores the process of unionization of domestic workers in Brazil and their struggle to be recognised as workers. She was also actively involved in the J4C campaign, and is a member of UVW. Davide Però is Lecturer in Employment Relations and HRM at the University of Nottingham Business School. He has conducted research on low-paid migrant workers’ organising and practices of citizenship in Britain, Italy and Spain – authoring a number of publications on the topic. Davide is also the PI for the ESRC Seminar Series ‘Migrants, Workplace and Community: Learning from Innovation in Civil Society’.