Enduring ‘Care’ and the Shifting Cultural Meanings of Convenience Food

The recent McCain’s we are family (2017) potato chips advert represents a wide range of family relations and ‘care providers’. The notion of love and care is claimed implicitly to be the central value of their products. It speaks for the role of food in providing and negotiating love and care for diverse family relations and care arrangements (Charles and Kerr, 1988). The advert addresses the sociological debates on convenience and care that ‘convenience food’ is ‘tinged with moral disapprobation’ (Warde 1999, p. 518) in contrast to the association with ‘home-made’ foods. However, Meah and Jackson’s recent study maintains that ‘convenience foods can be used as an expression of care rather than its antithesis’ (2017, p. 2065). Thus, it has become increasingly necessary to engage with a wider reflection on the shifting discourses of everyday things as ‘materialities of care’ (Buse et al., 2018).

Between February and July 2017, we carried out a mapping study at the M&S Company Archive on the documentations of food development and innovation since the 1970s, as well as participant observation in M&S stores. The study has advanced our understanding of the enduring value of care in everyday life food consumption through engagement with the changing materials and representations as recorded in the archive. We reflect on this here.

Convenience for authenticity: from a family treat to sophisticated everyday meals
In the 1970s, new choices of convenience foods for daily consumption emerged. It was popularized within the context that more people in the UK were spending holidays abroad and regularly dining-out in restaurants (Warde and Martens 2000). The first chilled product, Chicken Kiev, was developed at M&S in 1979; a dish commonly served in restaurants then. Cathy Chapman, Head of Product Direction & Development at M&S, acknowledged that unlike its predecessors, frozen TV dinners, Chicken Kiev was not positioned as a shortcut to home-cooked meals, but rather as restaurant treats with higher quality than fast foods (Russell, 2004). The product packaging (see Figure 1) aimed to emphasize ‘restaurant quality’. The running butter infused with garlic and herbs gave customers an impression of ‘luxury’ quality restaurant food. 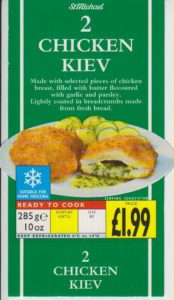 Restaurant quality ready-made foods continued to be developed and consumed during the 1980s, and throughout the 1990s/2000s. It was docummented in the M&S staff magazine in 1984 that there were ‘more and more working wives who want something that can be ready quickly and easily’ (‘Quickie Meals a Growing Success’, St Michael News, March 1984, p. 5). Alongside the characteristic of ‘quality’, the notion of authenticity further enriched the discourse of convenience. This was illustrated through a range of ‘exotic’ flavours in the ready-made meals and their archived packaging (see Figure 2 to Figure 5), ranging from simple hearty chicken curry in the 1980s, to a variety of curry dishes in the 1990s from different origins, to more sophisticated meals, such as the ‘marinated chargrilled chicken pieces in a rich and creamy masala sauce’ in the 2000s. 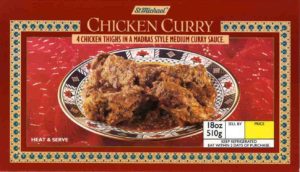 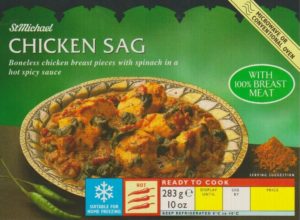 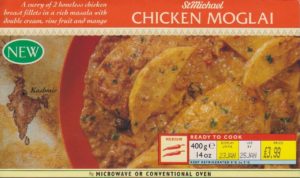 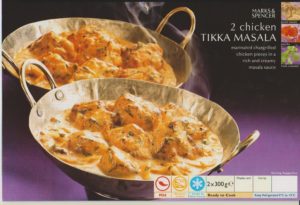 Convenience beyond time: care for the balance of work and life
The emerging range of convenience food products in the supermarkets seemed to be well-embraced among busy professional families during the 1980s. An article titled ‘Fast Feasts’ in the The M&S Magazine (1988, pp. 42-47), reported on interviews with a selected group of consumers who had busy daily schedules. For example, Mrs Hunniford, who was a chat-show host claimed that due to her hectic lifestyle, she went to supermarkets to ‘stock up’ (p. 42) ready-made meals for both her family and her guests on a regular basis. She mentioned: ‘I choose simple dishes that my family can cook when I’m away, as well as the more sophisticated packaged dinners for entertaining.’ She also expressed: ‘If food can’t go zap under a grill or straight into the oven, I can’t be bothered. There just isn’t the time.’ Additionally, it was reported in the St Michael News that individual members of the family were ‘doing their own thing’ in leisure times, so they had their meals at different times (‘Quickie Meals a Growing Success’, St Michael News, March 1984, p. 5). Thus, convenience foods provided choices for individual family members due to changing and disparate work/life patterns that could undermine shared family dinner times.

More specifically, it was claimed that ‘nutritionally balanced’ ready-made meals for ‘kids’ were developed ‘based on Government guidelines for calories, fat, sugar and salt’ that would help ‘busy parents’ to take care of their children’s health (‘Healthy Eating for Kids’, Your M&S, March/April 2006, p. 19). The food were described as ‘much nicer than school dinners’ and ‘better than… mum’s cooking’ in the chidlren’s feedback (‘The Taste Test’, Your M&S, February/March 2007, p. 18). Special meals for kids were important for those parents to facilitate care to their children by offering healthy and good quality meals that were of convenience for them to be a good parent beyond the time for preparation. 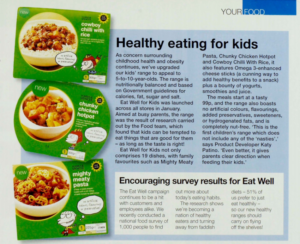 Figure 6 ‘Healthy eating for kids’, Screenshot of content from Your M&S in March/April 2006, p. 19, The M&S Company Archive

Convenience for good health: from counting calories to visualizing healthy eating
The options of convenience foods were expanding in parallel with wider society’s projected concern about individual’s health and body. As documented in an article in St Michael News in September 1985, ‘there has been an increase in demand for low calorie meals’ (‘New Slimming Meals Go on Trial’, p.1). We noted that the representations of healthy meals were changing with different highlights in their narratives and presentations. We also found the continuing innovation and refinement of ‘healthy’ food, from the early ‘calorie counted menu’ (see Figure 7) in the 1980s that simply highlighted the calories of the food on the packaging, to a wider choices of healthy ready-made meals for their ‘count on us’ range of products in 2000s (see Figure 8 and Figure 9), that presented a healthy but not ‘boring’ diet. More recent ‘eat well’ and ‘balanced for you’ (see Figure 10 to Figure 12) ranges tend to draw customers’ attention not just to the calories but other measurements, such as the levels of protein and carbs. 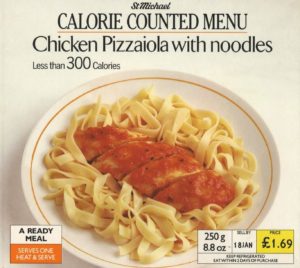 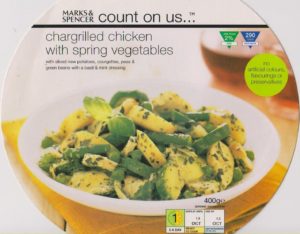 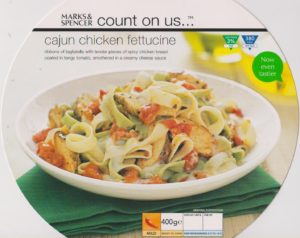 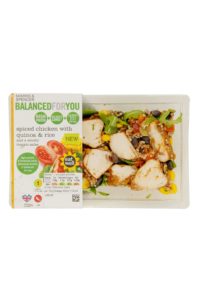 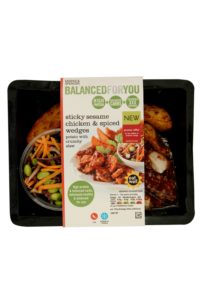 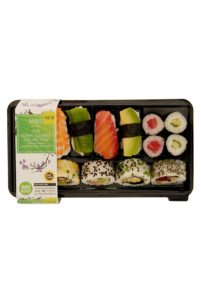 Nevertheless, home cooking is still seen as a ‘healthier’ option, and supermarkets in recent years have started to offer semi-prepared food kits, which contain raw ingredients that people can cook by themselves. The development of this range of products might be seen to focus on easy prepared healthy eating. However, in the emphasis on hands-on home cooking, we see the re-inscription of home-cooking as care in their new range of products. What supermarkets can provide is to do ‘all the hard work’, such as ‘marinating meat and fish, chopping fresh veg and herbs and preparing tasty vegetable side dishes and rice options’ (‘Get Ready, Let’s Cook Indian, Your M&S, September/October 2009, p.12). Customers then can serve fresher and ‘healthier’ dishes ‘in less than ten minutes’. As we observed in their recent food display in stores (see Figure 13), different readily prepared ingredients are individually packed and ready for customers to pick and choose for their ‘home-made’ convenience. 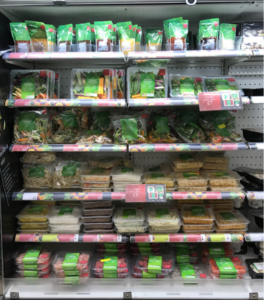 The study on the food archive has enabled us to interpret the shifting meanings articulated through various narratives of convenience foods across time. More importantly, the contextual value of care (for ourselves and for others) in light of changing society has been re-inscribed through the overlapping characteristics of quality, authenticity and health in the representations and narratives of convenience foods. From a social historical perspective, the continuing rethinking of convenience is essential in understanding the imbrication of everyday materials with shifting mundane social relations. Thus, the changing meanings and practices of ‘care work’ can be negotiated, as illustrated in recent cultural representations of food, in the light of material changes and developments.

Acknowledgement
We would like to express our acknowledgement for the financial support of the University of York’s Culture and Communication Research Theme Fund and the research support from the M&S Company Archive, especially their members of staff: Ms Katharine Carter and Ms Katherine Chorley.