Islamophobia is often viewed within the space of street-level violence perpetrated against Muslim communities.  However, in an increasingly more digital environment, social media sites like Facebook, Instagram and now Twitter have become the new virtual spaces for exacerbating online anti-Muslim abuse and Islamophobia on the Internet.  These incidents include; cyber harassment; cyber bullying; cyber abuse; cyber incitement; cyber threats and cyber hate. They are however not all confined, to social networking sites and online sites dedicated to blogging, virtual chat rooms and other online platforms that promote online Islamophobia are equally dangerous.

Indeed, as Tell MAMA (Measuring Anti-Muslim Attacks) recently noted they had found 548 verified incidents (of 729) reported to them concerning anti-Muslim abuse. The majority of incidents took place online (402 out of 548). Almost, a fifth of service users reported repeat offline incidents of anti-Muslim hate with Muslim women suffering more offline incidents than men. Typically, the victim was wearing traditional Islamic clothing at the time of the incident and the perpetrators were overwhelmingly white male (Littler and Feldman, 2015 ).

Moreover, one of the more disturbing Twitter hashtags that appeared after the Paris shootings in January 2015, was the #KillAllMuslims hashtag. The hashtag, which was ‘trending’ in the UK, was accompanied by a number of provocative and racist comments targeting Muslims and Islam. Similarly, after the terrorist attack in Tunisia, a number of messages indicating online anti-Muslim hate were shared on social media sites such as Facebook, Twitter and Instagram. Some examples of hate messages have been documented below. 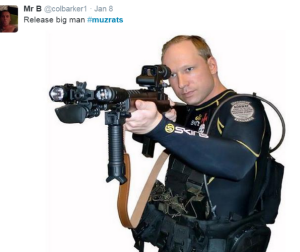 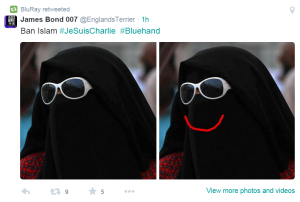 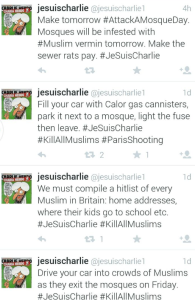 Many of us also recognise this level of online abuse via platforms such as Twitter.  I personally have now become accustomed to seeing online trolling and anti-Muslim abuse all targeting me because of my work on anti-Muslim prejudice and the problems of cyber hate against Muslim communities.  The overwhelming evidence does show that words, visual images, tweets, Facebook comments and online videos of hate not only cause offence but can have a huge impact on the victims they target.   It allows online behaviour to become normalized by offenders which allows a perpetrator to use in many cases anonymity, manipulation and social control to target their victims.

Equally, ordinary Muslims have also experienced this online hate which has had an impact upon them and their families as shown by the research which I have conducted with Muslim communities. The online ‘hate’ comments made can have a negative impact on the victims who are targeted and can be very upsetting and unsettling for them.  Post Woolwich, the Internet and social networking sites have been used to by groups like the far-right to attack Muslim communities. This type of prejudice follows a ‘drip-drip’ effect and whilst it has intensified following Woolwich, the level of online anti-Muslim prejudice remains on a steady increase.

Many of the comments posted online through social networking sites, like Twitter or Facebook consist of an ‘extremist’ and incendiary undertone which attacks the whole of ethos of the government’s social cohesion strategy and risks stoking up more hatred in particular in the case of online Islamophobia.  Unfortunately, however, policing online anti-Muslim abuse remains poor and more needs to be done in providing a safe environment where people are open to reporting online abuse to the police without fear that they will not be taken seriously.  The importance of online Islamophobia does not always get the media and political attention it merits. It is often disregarded as ‘less valuable data’ or people are more concerned with the visible threats Muslims face. This is the problem when trying to ascertain what constitutes ‘high’ level and ‘low’ level incidents. For example, the use of targeted ‘trolling’ can constitute online harassment and has a huge impact on the victims.   Sadly, as a society the way we deal with online anti-Muslim hate is with a laissez-faire attitude at best and at worst leads to us simply asking the victim either to Block someone via Twitter or to simply close your account.   This is why we need to try and build a new culture towards understanding the victim first and foremost.

Imran Awan is Deputy Director of the Centre for Applied Criminology at Birmingham City University. His new book Islamophobia in Cyberspace (2015) is published by Ashgate.