Photography and the Public Sphere

How do we react to images of cruelty, violence and suffering? How can such images engage audiences’ compassion and empathy so they become actors involved in some kind of campaigning or at least donating? Although there is talk of ‘compassion fatigue’ and ironic distance from documentary photography, images have played a crucial role in the construction, reproduction and critique of political power since the early Twentieth Century.

The age of visibility is also an age of atrocity, which photography has played a crucial role in chronicling. One major instance of this was the Holocaust photojournalism of Margaret Bourke-White and others who accompanied allied armies into the Nazi concentration camps, generating ‘iconic’ images of atrocity. Her photograph of Buchenwald (above) was described by Time magazine in 1989 as one of ‘10 great iconic images of photojournalism’.

In past decades visual representations of suffering have been extensively used in political and humanitarian campaigns. Even so, the use of photography raises many issues about how representations of violence are viewed, in relation to which there has been considerable scepticism. Critics have suggested that visual display is an inferior medium to that of discourse and argument. Michael Ignatieff, for example, refers to western audiences as ‘Voyeurs of the suffering of others, tourists amidst their landscapes’; Stan Cohen wrote of how TV ‘hyperreality’ presents victims of violence with both immediacy and ‘fathomless distance’. And so on through Sontag and Žižek and other cultural critics.

On the other hand, iconic photojournalism has been seen as part of the formation of a democratic public. For example, the Israeli photographer and cultural critic, Ariella Azoulay, has written about and exhibited photographs of the Occupied Territories. In The Civil Contract of Photography (2008), she argues that the photograph is a visual document from which the civic spectator can retrieve meaning and resist institutional violence. So the question remains as to how to use visual technologies to enhance empathy with victims of suffering and, engage a wider public to shift from simply witnessing events to taking action?

Documentary photographs, and indeed all photographs, even those destined for family albums, presuppose a public – that they will have viewers. But producing something visual is not the same as rendering something visible. Simply to see an image is a passive and detached pose. Rendering violence and suffering visible involves work, memory, reading and so forth. The documentary photograph contains a claim to truth (‘this is a valid depiction of an event’) which can of course be debated by a critical public, and possesses a unique temporality (‘this happened then’).

Photographs of suffering also entail a further claim to empathy and solidarity which evoke tacit notions of justice and humanity – that ‘things should not be like this’. That is, they evoke claims to truth and norms of justice and compassion. Azoulay says that the reception of a documentary photograph entails three levels of viewing – there is the labour of seeing surface meaning (what I’ve referred to as the visual), then there is its professional and aesthetic content and finally a call to action within a critical public (rendering suffering visible). I would like to explore a little the relationship between the photograph, its aesthetic content and its capacity to evoke a critical response. 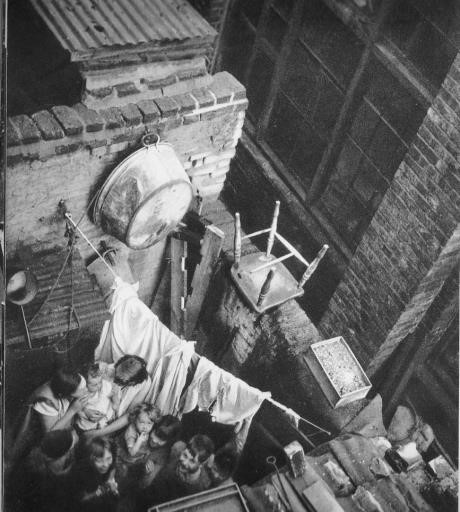 The work of Edith Tudor-Hart (née Suschitzky, 1908 – 1973) is a classic example of the political programme of social realist photography. Born in Vienna she worked from 1929 with the Bauhaus school in Germany and the Workers’ Film and Photo League until her exile in the UK in 1933. Here she became a well-known photojournalist whose work was regularly commissioned by critical publications such as The Listener. Interest in her work briefly revived in 1980s but was then eclipsed by the postmodern anti-realist turn in cultural studies. It now appears to be undergoing a further revival with a long running Vienna exhibition following one in Edinburgh earlier this year.

Her photography employed a realist method that aimed to demonstrate antagonisms of class but with nuances. In her ‘London Backyard’ (Figure 1) the dramatic squalor of the scene is greatly emphasised by the unusual angle from which the picture has been taken. Also for Hart, children represented a subversive potential of socialization through self-government and mutual discovery – the possibility of a society different from that of the competitive egoism of market society. Here the faces of children are upturned hopefully while adults are looking downwards towards the baby. This photograph was published in the widely selling 1939 Odham’s Press collection of the World’s Best Photographs. The commentary was a powerful statement of the relationship between photography and the public sphere. ‘No longer’ it said, ‘can we sit at our ease dismissing such things as the slum problem with a few exclamations of polite horror and a transient feeling that “somebody ought to do something.” Photographs now bring these things starkly to our notice with a vividness that refuses to be passed by. …Such photographs are social documents which it is impossible not to read. They make us aware of the world around us and what is right and wrong with it, whether we like it or not. If it has done nothing else, the camera has made the pleading of ignorance-the ostrich-like burying of our heads in the sands of illusion-a very thin excuse’.

However, this kind of optimism might now be regarded as naïve in several ways. There is the problem of ‘aestheticizing suffering’ and the possibility that viewers might find something pleasing in a depiction of violence. Take for example Margaret Bourke-White’s ‘Bombing Moscow’ (Figure 3), which depicts an atrocity but is also an aesthetic visual dialogue of sharp and soft, black and white. Similarly the works of James Nachway and Sebastiano Salgado have been accused of ‘aestheticizing the unacceptable’ in photographs such as those of forced migrations and detention camps in Kosovo. But I would like to question these critiques and offer a defence of the critical potential of documentary photography with reference to a few further examples. 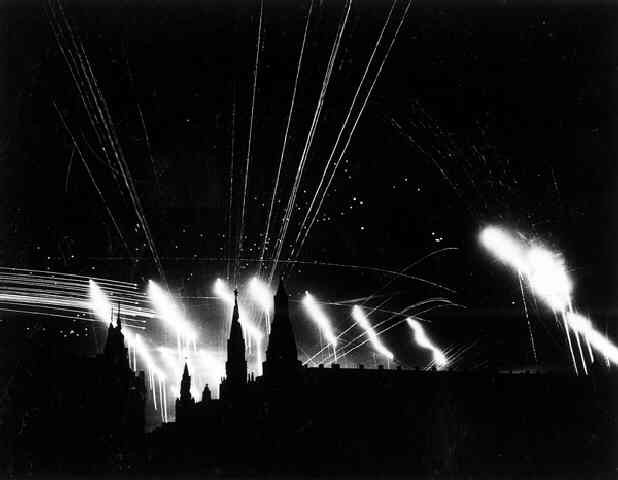 For a cultural product to have an aesthetic quality it is not simply (or necessarily) that it ‘gives pleasure’, but on the contrary that it causes discomfort and precisely evokes the possibility and tremor that ‘things could be different’. That is, it has the potential to evoke the normativity noted above. Thus through the very formal classical composition of Salgado’s photographs in Migrations there is an allusion to the possibility of an alternative saner world – his aesthetic reaches beyond simple visual depiction and renders the degradation of his subjects visible in a way that evokes solidarity.

Even if the political optimism of Tudor-Hart or, say, Robert Capa is no longer possible, documentary photographs can still address critical publics and even more so now than in the 1930s with the speed and ease of digital reproduction and communications – illustrated by campaigning  organisations such as ReportDigital.

As a final example I would like to go back to the documentary Holocaust photography mentioned above, but through a photograph (Figure 3) that does not in itself depict atrocity. 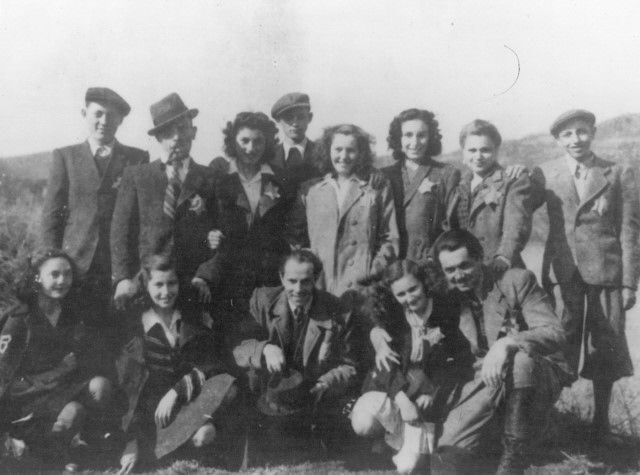 Here we see a group of young people posed for a portrait – the kind of photo that appears in family albums and is of little interest to those who do not know the subjects. Until we notice that everyone in the group is wearing a yellow star and we know (because, of course, we are told) that this photo was taken in 1944 shortly before this group were deported to a ghetto in Czechoslovakia. The yellow star draws us, the viewers, into the photo, and acts as what Roland Barthes in Camera Lucida called the ‘punctum’, that is the wounding, personally touching detail, which establishes a direct relationship with the object or person within it. He says, ‘I observe with horror an anterior future of which death is the stake…. What pricks me is the discovery of this equivalence. … I shudder . . . over a catastrophe which has already occurred’. This photo evokes a desire to intervene and protect the subjects from their fate – to interrupt their pose that is oblivious of the genocidal destruction that probably awaits them. But what this also illustrates is that it is not the ‘graphic’ or ‘shock’ photo that is the most effective – although it sometimes may be. There are different photographic styles that have the capacity to evoke compassion and the desire to engage.

What I have tried to illustrate here is that, despite anxieties about the use of photographic images and the risks of voyeurism and aestheticization noted above, documentary photographs presuppose an audience and enter a field of critical discourse in which conflicting forces struggle for dominance. Visual images do not work apart from the world, but precisely because they are part of the world and its attendant relations of domination and resistant solidarities. Photorealism makes visible global structural violence although an image is always ‘read’ in context.

Any solidarity that arises does so from the world outside and is based in our cognitive and normative knowledge. These processes become increasingly complex in the present with digital technologies of reproduction in which control of both production and reproduction of the image is difficult. While news corporations govern discursive the field of images, there are many alternative civil society groups and photo collectives getting images into circulation engaging with critical publics, reinforcing a longstanding concern to document the world in order to change it.

Larry Ray is Professor of Sociology at the University of Kent. His most recent book, Violence and Society (Sage), develops a wide-ranging analysis of violence including prehistoric violence, long-term trends in homicide; masculinities, gender and violence; and modernity and the Holocaust.