The use and preservation of Australia’s old-growth forests has long been a source of contention between the state and civil society actors. Changing values and norms around natural resources led to the formulation of agreements to take the heat out of the issue and manage it in a more technocratic manner. In Tasmania, the struggle between pro- and anti-logging positions has been particularly intense, given the economic importance of the forestry industry. The breakdown in attempts to renegotiate a settlement around forest management in 2018 saw the end of a period of relative peace and the claim that ‘the forest wars are back’. These issues have flared up once again, as an area of old-growth forest has been marked for logging to resume, in spite of the threat to habitat of the endangered swift parrot and the devastation left behind. The intractability of the struggle in Tasmania raises important issues around the management of natural resources, but also how these are linked to the identities and values of the contending parties.

Natural resources are an important source of income for the Australian state, representing 59% of exports. On a deeper level, the natural environment was also significant to Settler Australians, as its distinctiveness was seen to ‘represent their collectivity to themselves and… distinguish themselves from Others’ (Smith, 2011: 3). In practical terms, the value of natural resources was continually contested, as industry prioritised economic concerns in the face of calls to protect the natural heritage of the nation. Yet, this perspective was still limited in scope, as it devalued and excluded existing indigenous knowledge around the biophysical environment.

Within these bounds, tensions between economic and non-economic uses have continued to characterise forest management, but these also rest on deeper issues of identity, belonging and the value of the natural environment. The effects of this contest have been played out in long-running battles between pro- and anti-logging camps. Opponents of logging have engaged in various forms of direct action, such as disrupting wood chipping mills and forestry operations, while also involving symbolic targets like the Spirit of Tasmania and more traditional sites of power like the Federal Parliament. These actions have aimed at highlighting the environmental damage caused by logging, particularly the threat posed by the destruction of old-growth forests. At the same time, pro-forestry actors have mobilised to present a counter-narrative that emphasises the economic benefits and maintaining local communities that are otherwise marginalised and neglected.

Faced with apparently intractable conflict around forestry, the Federal government sought to introduce formal mechanisms to reduce the tension and devolve responsibility to the State and Territory level. The National Forest Policy Statement (NFPS) was introduced in 1992, with implementation to take the form of a series of Regional Forest Agreements (RFA) from 1997. The RFAs were based on biogeographical regions, intended to ensure a sustainable balance in the use of forest resources in each case. Defining regions in this way created other challenges, as they did not necessarily align with local economic regions, leading to losses in communities that relied on the economic benefits that derived from forestry.

Another important limitation of the NFPS was that Tasmania was not included in the agreement, given its heavy reliance on forestry and the intense nature of the forest conflicts in the state. Examining the nature of contention in Tasmania, Buckman (2008: xvi) has argued that the co-existence of extractive industries and environmental interests have at times led to ‘brutal and bloody clashes… based on vastly different views of the meaning of wilderness’. The figure below shows the number of protest events in all States and Territories focused on forestry issues over the 1997-2017 period, reflecting mixed results in reducing the level of contention. Tasmania’s exceptionalism is also notable here, as there was an increase in contention from 2004, with forestry on the island playing a role in the 2004 and 2007 Federal elections. 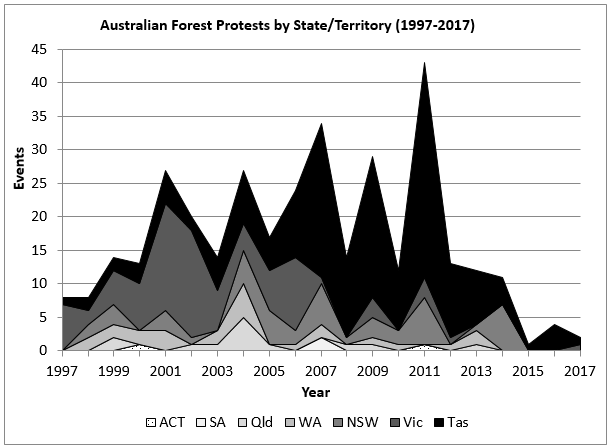 The question that arises from all this is why were the RFAs successful in New South Wales, Victoria and Western Australia while failing to quell contention in Tasmania. RFAs were not a complete success in these other states, as illustrated by the incoming Labor government’s decision to scrap the WA agreement in 2001, but they did provide space to consider alternatives. Central to these diverging trajectories was the ability to move towards a position that embraced multifunctional land use, recognising the messiness involved in moving from productivism and the need to find alternatives.

Calls to shift towards multifunctionalism are risky as they potentially present a threat to established interests while not satisfying the demands of conservationists, meaning the ability to adopt approaches that enable the co-existence of recreation, conservation, and production are shaped by the character of social relations and the strength of the identities that underpin these. Considering change in Denmark, WA, Curry et al argue that the shift towards multifunctionalism took a long time to bed down, as the acceptance of the alternatives presented by conservationists rested on their position as a legitimate part of the community. In this case, connections within the community enabled the forging of new possibilities, as conservationist and productivist advocates were able to bridge the divide to find mutually beneficial outcomes.

Tasmania emerges as an important manifestation of the challenges involved where identities are deeply rooted. The socio-geographical uniqueness of the island state has resulted in a tie to the forests that is much stronger on either side. Although Buckman (2008) argues that the general public was not too concerned with forest management issues, those that were involved held their feelings more intensely. In a context where identities are forged around pro-/anti-forestry positions it can be difficult to change course. Cianchi (2015: 148) captures the emotional force driving activists by quoting Ruby reflecting on the fate of a tree she had established a connection with, noting ‘I’ve seen a lot of trees get cut down… there’s just that one tree that’s really impacted on me and I think it has changed me and… my activism’.

On the pro-development side, Trigger (1999: 172) quotes a forest industry representative arguing ‘it’s like a fever, once you catch it, and this is common throughout the industry, people just love working with wood’. In both cases, the feeling for the forests and what they represent contributes to the formation and reinforcement of identities. The strength of these identities is reinforced through interactions with those who embody different views, making it more difficult to de-escalate and find common ground.

Returning to the current contest over Tasmania’s forests, we can see these identities continuing to shape developments, making the possibility of resolution difficult to identify. The ongoing divide is reflected in the contrast between Steve Pearce’s description of the threatened trees as ‘old, gnarly and 60 metres tall – old beasts basically’ and Prime Minister Scott Morrison’s stated desire to cut ‘green tape’. In such an environment, the relationship between the contending parties can be seen as one grounded in distrust. The repeated conflicts and failed agreements that have characterised forest management in Tasmania since the 1970s have led to a situation in which each side has developed ‘a pervasive negative lens through which others are perceived’ (Bijlsma-Frankema et al, 2015: 1020).

The result is that contending parties focus on strengthening their existing bonds, treating outsiders with wariness, leading to the threat of sporadic violence and an inability to negotiate a compromise. Compounding the difficulties, Beresford (2015: 23) argues that ‘the state’s entrenched power elite… [continue] to see in Tasmania the vision of industrialisation’. In the absence of an ability to overcome entrenched positions of distrust, a resolution to the ongoing forest wars is likely to remain out of reach.