Fear and Loathing in everyday motoring: How race works on the road

Motorised transport in general, and everything associated with it, can be couched as inherently problematic: these machines are built through the extraction of finite raw materials, they burn fossils fuel (also finite), they pollute, they can make us lazy, angry, feel inadequate and they can hurt, maim or even kill. Let’s not forget, cars also require a huge amount of infrastructure, ranging from the roads that need to be planned, built and maintained, to a whole raft of policies, legal frameworks and legislation that is acutely tied to the car’s presence on the road and within global economies.

At arguably more mundane levels, it’s difficult to avoid an evolving mass mediated car presence; not only TV shows, but social media, music videos, adverts and yes, even feature films use the car as a key feature through which narratives around character, plot and even story can be held together. And then, of course, there are all the stereotypes, clichés and modes of thought which connect closely with what a car is and what it signifies. And it’s here where we gain insights around how cars shed light on who we think we are, and what others think of us.

I started researching car culture after being drawn toward the mere fact that cars seemed to be an explicitly important aspect of social life in especially those places which are urban and diverse in terms of class and ethnic identity. Bradford is one of those places – it has a history of immigration going back centuries, and it’s also economically varied, with some of the outer, suburban neighbourhoods having their own distinct identity in relation to those termed ‘inner-city’. Against this backdrop, such cities also have a schizophrenic car narrative. For a growing proportion of younger drivers, their cars are no mere appendage that enables more efficient and comfortable movement on the road, but rather offers opportunities through which their own creativity, taste and identity can be rehearsed. For this category of driver, the car is an important cultural artefact that is always open to being reworked, reimagined and recreated.

However, and beyond those with an appreciation of this subcultural formation, cars are usually represented in very specific, and relatively narrow, ways. If you read local newspapers, you won’t come across too many stories which are positive or somehow celebrate cars and their driver. More often than not, cars are death machines, driven by young, problematic, often criminal and usually male types. If not that, then expensive cars belong to drug dealing gangsters, or are driven without insurance/MOT/Road Tax, sometimes recklessly, other times, while under the influence of one substance or another.

Sometimes, we are asked to accept that the picture is more complex than that; that the subjects of these discussions are unruly or problematic because they have been raised badly, have a lack of appropriate role models, or because their ‘culture’ is somehow deficient, making their integration a challenge that impacts us all. However, and while this mode of thought is not universal, it does have a sense of logic, or inherent rationale underpinning it and also feeds into especially those debates around those Muslim communities who are deemed, even in general, to sit at odds with whatever constitutes Britishness.

It’s fairly well established that cars can confer, or merely pronounce status; see someone driving a prestige car, and you’d probably, and not unreasonably, allow yourself to think the owner is successful, affluent or occupying a certain class (economic and/or cultural) position. Stands to reason. Well, not quite. See a distinguished looking older male driving a Rolls, then sure, he’s probably the director of some company, or a millionaire or some other explanations that’s equally coherent. Now, think about the same car being driven by a young, non-white male. How do we explain that? When you talk about these things, being mindful not to be judgemental or prone to stereotyping, you don’t even have to complete the sentence sometimes. Instead, imagination taps into a well of existing stereotype, in turn helping the explanation to unfold and present itself as valid and unproblematic:

‘A lot of nice cars in Bradford,’ you’ll say.

‘Oh yeah: a lot of nice cars in Bradford.’

There may be a pause, or maybe not because the next line will be something like:

‘But we all know where the money comes from, don’t we?’

Yes, yes we do. Well, we think we do – it’s obvious, isn’t it? Twenty something Black or Asian male, driving a thirty-thousand-pound car through a multi-ethnic urban space is ready to be interpreted with and through some elements of existing discourse. For example, we ‘know’ that in general, young (particularly working class heritage) BME males tend to underperform educationally, thereby enabling them to underperform economically. We also ‘know’ that these same young men live in neighbourhoods that not coincidentally happen to be rehearsed as either deprived, prone to criminality or in some way lacking; defined by poverty, unemployment and tasteless cultural practices, these are the places that polite society barely tolerates, but can never understand, let alone appreciate. And thirdly, we also ‘know’ that in such neighbourhoods, certain illicit activities are prone to operate – for example, drug dealing, sex work as well as other organised forms of crime. And we know all of this because journalists, politicians and academics keep telling us about it, arguably in their own interests. Whether or not we fully embrace the context and its explanations is one matter, but all this data and information constitutes a landscape which is ready to be filled in with our personal experience. With these elements of our sense making equation in place, all we need to do is solve it when we see it: Young BME Driver + Expensive Car + Inner City ‘hood = Drug Dealer/Gangster/Criminal.

The problem with these sorts of narratives is that they are based on certain ways of seeing the world, and these ways are neither arbitrary nor neutral. They are ideologically grounded, in that they are a result not of our independent minds, even though we think our thoughts are governed by ourselves, but of broader social, cultural and historical contexts wherein expectations of ‘race’, ‘ethnicity’ and class are given license to operate. Class is deeply significant as an intersecting force wherein the operation of race becomes simplified yet and more robust. Without the intersectional loading of social class, judgements and perceptions would remain anodyne, devoid of a more wholly racialized reading. When people talk about especially working class, or economically deprived parts of any multi-ethnic city, the encountering of certain types of cars, and certain types of driver, racism has the space to become legitimised as natural, common sense and rational thought. It is at this mundane, every day and seemingly rational, common sense and even trivial level of conversation where the presence of race quietly resides. 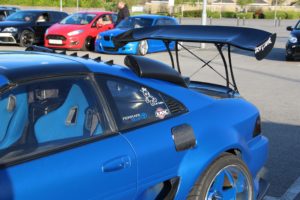 There’s another, usually overlooked and seemingly misunderstood aspect of the car in economically and ethnically diverse contexts. And this isn’t about driving per se, but it’s usually about how cars can look and sound. It’s not uncommon to come across cars and other vehicles that have been modified or customised with aftermarket enhancements: alloy wheels, loud exhausts, ostentatious spoilers, bespoke paintwork, upgraded in car entertainment, revamped interior, engine, gearbox, suspension, brake system ugrades… and more.

But if you look closely enough, you might see that cars are being used as objects through which creativity flourishes. We don’t really hear that, but instead get to engage with its counter; that these cars are driven by those without taste, without any appreciation for what is deemed to be good, normative and inoffensive cultural practice. This, of course, is entirely about how class is performed and lived, and extends the ideas of Hoggart, Williams and others who explored the validity and value of working class culture. So it’s not really surprising that many of those who mod up their cars identify as being working class, an aspect of identity that has been caricatured, demonized and marginalised through either inattention or conversely, through populist rhetoric and critique. Add the variable of ethnicity into the mix, we encounter and succumb to the narratives and modes of wisdom in which working class and BME groups are rendered subject to intersecting types of discrimination.

In subtle and complex ways, cars transmit and modify our identities behind the wheel. As a symbol of independence and freedom, the car projects status, class, taste and, significantly, embeds racialisation. We can also gain insights into how identity is rehearsed, enhanced and interpreted with the car in mass media; music, TV shows and even film. Through these mechanisms, and by virtue of banal, everyday encounter, we all come to interpret what we see in distinct, but occasionally and subtly problematic ways. In order to strive for just, fair and equal societies, a significant amount of work deconstructing and resituating the significance and meaning of the car needs to take place. This can be done through state actors and agencies taking a more appreciative, informed and consultative stance in relation to understanding the seemingly disproportional investments some owners have in their cars. Unless a more realistic, and grounded appreciation of working class, and highly creative, car culture is transmitted, we will continue to discriminate informally (through stereotypical expectations, for example), but also in more concrete ways; through BME drivers experiencing disproportionate incidences of stop and search.

Yunis Alam is a Senior Lecturer in Sociology at the University of Bradford. He has particular interests in public sociology, ethnography, ethnic relations, consumption, popular culture and how these relate with and have an impact on identity he is the author of Race, Taste, Class and Cars published in 2020 by Policy Press.