The summer of 2017 was particularly hostile to Indigenous people in Thunder Bay, Ontario, Canada, a settler city built on the traditional territories of the Anishinaabe and signatory to the Robinson-Superior Treaty of 1850. To challenge racism in the city, Northern Feminisms, a collective of feminists, Indigenous and racialized people, and settlers, staged Poetry Against Racism, an outdoor poetry action. We sought a decolonising feminist intervention into the historically rooted systemic racism that makes Thunder Bay inhospitable to Indigenous people.

Poetry as Racism
Like all language, poetry is political and has effects. Some poetry reproduces stereotypes, distorts history, encodes sexism and white supremacy, wounding listeners/readers whose identities and histories are misrepresented. The poetic form itself can be a vehicle for racism. For example, one of Canada’s Confederation Poets, Duncan Campbell Scott (1862-1947), wrote a fetishistic poem about an Indigenous woman, dooming her to death. “The Onondaga Madonna” (1898), widely anthologised and taught in schools, ideologically worked to construct the Canadian settler colonial state. As Deputy Superintendent of Indian Affairs overseeing residential schools, Scott influenced and instituted residential schools (1884-1998) and the Indian Act (1876 – ongoing), which assimilated, legally restricted, and segregated Indigenous people. While Indigenous people have always known that residential schools were inhospitable places of death and community destruction, the 2015 findings of the Final Report of the Truth and Reconciliation Commission of Canada revealed to all Canadians that residential schools caused cultural genocide and intergenerational trauma. Yet, evident in Thunder Bay, some settler Canadians defend residential schools, tell Indigenous people to stop living in the past, and appeal to segregation by inhospitably demanding, “go back to your reserve” (reservation).

2017: A Call to Action
Globally, Canada is known for humanitarian multiculturalism rather than as a settler colonial state built on the genocide of Indigenous people. Canada’s white supremacy, while systemic, institutional, and structural in scale, produces individual and interpersonal racism in our homes, streets, shops, restaurants, and local and social media. Racism is enacted, felt and experienced, grounded in the personal and the local. Thunder Bay is “nationally known for anti-Indigenous discrimination and violence” in its police force, for the flawed investigations of nine Indigenous deaths (see Seven Fallen Feathers, 2017, Tanya Talaga and Broken Trust, 2018, Gerry McNeilly). Verbal and physical assaults, from racial slurs to objects thrown at Indigenous people, are common on our streets, creating fear for Indigenous people. In January 2017, a white man in a truck threw a trailer hitch at Barbara Kentner, an Anishinaabekwe walking on a sidewalk with her sister; she died of her injuries in July. First charged with aggravated assault, the attacker is now waiting trial for second-degree murder.

In January 2017, American women protesting Trump’s presidency called for global solidarity, resulting in Women’s Marches in Canada as well as place-based and social media actions. In a creative upsurge, American poets created pop-up poetry events to challenge the increase in toxic ideologies. In Canada, after a white male terrorist killed six Muslims in the Quebec City mosque shooting on January 29, Canadian poets wrote against Islamophobia. Poetry as a form of protest and resistance, as a means of expression and connection, as a call for change, surged in Canada during 2017. Northern Feminisms felt an urgency to speak out against languages and acts of racial hate in Thunder Bay, and the idea to hold an outdoor poetry event where Indigenous, marginalized, and feminist voices could speak their truths took shape.

Poetry Against Racism
Given our experience with feminist action and creating poetry workshops and activities, Northern Feminisms envisioned a walkable outdoor poetry circuit and actualised a two-week timeline. We chose the method of speaking poetry aloud outdoors in accessible downtown places for three reasons: 1. poets use words and sound in ways that touch people on an emotional level beyond the rational mind; 2. to share with passers-by, perspectives and voices rarely heard in mainstream places and media; and 3. to reclaim places in Thunder Bay where racist rhetoric and material violence occur and to overlay the sites with a poetic language of justice, love, and anti-racism. We used a progressive stack method: at each stop the schedule was negotiated so that Indigenous poets spoke first, then those with multiple intersections of oppression, and lastly, those with compounded privilege. To encourage different voices, we used the step-up/step-back method: each poet read one poem under three minutes per stop. We created a pre-circuit outdoor writing workshop and two walkable loops on each side of the two downtowns; one on the north side (formerly Port Arthur), the other on the south side (formerly Fort William; the cities amalgamated in 1970 and became Thunder Bay). Each of the eleven stops was selected for its significance. For example, the path at McVicar Creek was chosen as the first stop to honour an Anishinaabekwe, one of the Missing and Murdered Indigenous Women and Girls in the city whose body was found by the creek in the 1970s. To honour water and the Anishinaabe, the Sacred Fire Circle on the Lake Superior/Gitchegumi waterfront closed the first loop. Kaministiqua River Park was a stop to remember the Indigenous youth whose body was found in the river and whose death/killing remains unresolved. The last two stops were especially emotionally charged: the spot on McKenzie Street where Barbara Kentner was struck; and the McIntyre River, which runs through the city and has been the site of much violence, pain, trauma, and death for Indigenous youth. Their deaths are an open wound, leaving Indigenous families and communities hurting, waiting for justice. 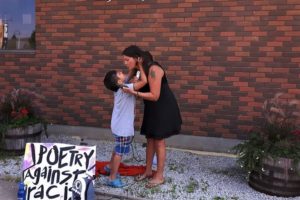 We posted a call on our Facebook page, Northern Feminisms NWB, and to encourage hesitant voices and poets of all abilities, we created daily writing prompts and inspiration. After the local newspaper, which has a history of publishing racist letters-to-the-editor under the guise of balance, sunk to a new low by publishing—on International Indigenous Day—an anti-Indigenous opinion piece by a retired white male judge, we added a poetry stop: the public sidewalk in front of The Chronicle Journal building. The piece was especially egregious as he argued that Indigenous people have “very rich Indian status benefits” resulting from a “gravy train” system that was “spectacularly unfair”—to white people. Much outrage and emotional pain erupted as did poems that spoke back to white supremacist patriarchy.

We are the children taken to be indoctrinated to be lesser forms of you.
We are the children of the taken, who, in this process of yours, got lost or hurt instead….
Why won’t you tell your children who go on to be your judges, doctors, journalists,
your “professional elite,” that our lands, just like our women and boys, you rape.
There is chaos in these lands among our children.
It is chaos we know you created.
You said you were unbiased.
Where is your unconditional love for us?
We see you giving it to your children in larger measure than ours.
We see the cumulative effects this has had.Your collective wealth continues to grow while ours continues to diminish.

Our Facebook page and the poetry circuit attracted much attention, including positive coverage from local and regional media, from CBC to APTN (Aboriginal Peoples Television Network). But not all attention was supportive: on our Facebook page, a male posted a self-authored grossly racist poem about Indigenous youth at the McIntyre River. We initially planned to block him and delete the poem, but one of the Anishinaabe poets suggested another strategy: he challenged the troll to a poetry duel and wrote back to the poem of hate; a thread of poems ensued. The poetry face-off showed racist rhetoric being countered in a creative way, words of justice challenging words of harm. We worried that the white troll and his friends would show up to read poems; however, the stack method ensured that if they did, they would be last to speak, and we would have moved on, leaving them alone to recite their racist poems. 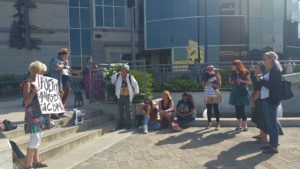 Poetic Action as Elation
During the poetry circuits, we shared photos and updates on social media. One poet exclaimed: “There’s a lot of buzz on social media. People are picking up on this idea of putting poetic words of resistance out in the street, reclaiming these public spaces and talking back to this racist rhetoric that’s floating around our city.” Each stop found a new circle of listeners and new poets, with some continuing to the next stop. Some poets had never read their poems aloud; speaking their words was empowering. The support of listeners was palpable. The in-person and social media audiences told us that hearing the poems, following on the streets or online, and participating in the two-week process, was energizing. At the end of the day, the poets felt emotionally spent but exhilarated. Tired but gladdened, we posted concluding thoughts on the Northern Feminisms page:

Poets–your words were beyond beautiful and soul-stirring. Thank you all poets, listeners & supporters of Poetry Against Racism–and Yasmin our sound person who made sure the mic worked so our words were amplified! Our powerful words placed truth and hope into public places of Thunder Bay. Words do make a difference.

Taina Maki Chahal is a key organiser and member of Northern Feminisms and has created numerous writing workshops and events over 25 years, beginning with the Northern Woman’s Bookstore. Last year she created the writing workshops EGG and BIRD, both held at the public library. She strives to create welcoming spaces to encourage people to write. She is a poet, playwright, and writer concerned with justice and decolonizing. For paid work, she is a Contract Lecturer of English and Anthropology at Lakehead University, Thunder Bay, Ontario, Canada.