Are there more COVID-19 deaths than expected in BAME communities in England – what does the data say?

There is increasing concern that people from Black, Asian and Minority Ethnic (BAME) communities are being disproportionately impacted by COVID-19 in England. Over the first few weeks of this pandemic there have been several anecdotal reports to suggest that there are many more cases of, hospitalisations for, and deaths due to COVID-19 than we would expect in BAME communities. This phenomenon has been reported both in the general population as well as amongst frontline staff particularly those working in the NHS. In this piece I attempt to go beyond this anecdotal evidence and summarise what can so far be said about the health impacts of COVID-19 on the BAME community from key publicly available datasets.

This article looks at data concerning deaths amongst NHS staff, it then goes on to examine the numbers of cases and deaths in the general population across different parts of the country, before looking at rates of admission to intensive care for critically ill patients, and finally analysing deaths in hospital explaining how to standardise these deaths to compare the observed numbers with those we would expect to see. Each of these analyses separately suggest that people from BAME communities are being disproportionately impacted by COVID-19, and when combined the analyses presented here provide overwhelming evidence for the idea that people from BAME communities have indeed been disproportionately impacted by the virus.

As obituaries for NHS staff dying from COVID-19 started to appear in the media it became increasingly apparent that the vast majority of those dying were from BAME communities – resulting in the head of the British Medical Association writing to the government to demand an investigation.

Areas of the country that have been worst hit by COVID-19 are Harrow and Brent closely followed by Ealing, Newham, Lewisham and Croydon all of which have at least 45% of their populations identifying as BAME. Whilst such evidence suggests that there may be a relationship between BAME populations and the impacts of COVID-19 these datasets do not explicitly tell us the ethnicities of the people testing positive for and dying of the disease in each of the local areas. 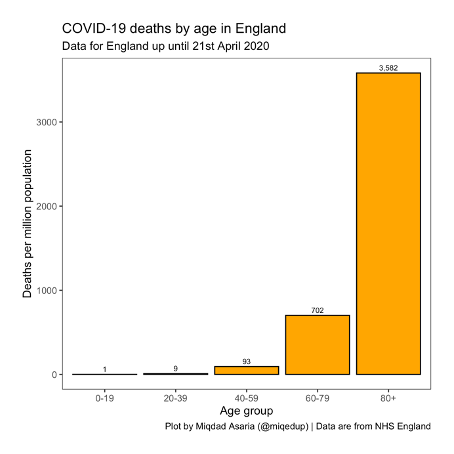 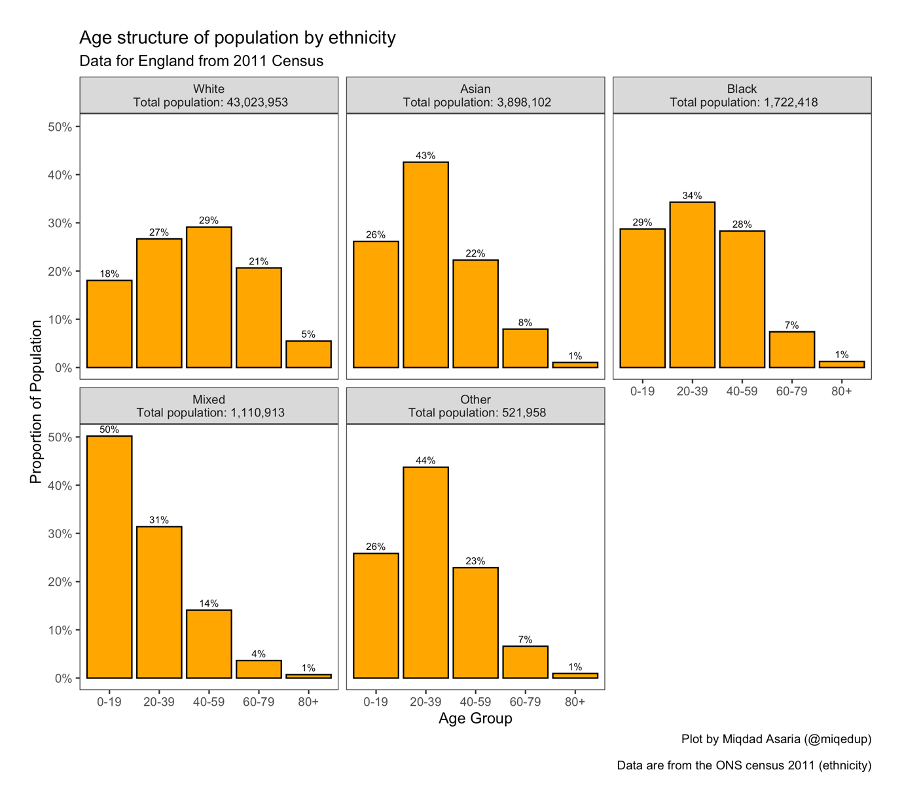 The graphs above show the results of applying these age specific mortality rates to the age structures of the populations for the different ethnic groups. They show that up until the 21st April 2020 we have seen far less deaths from COVID-19 in the White population than we would have expected given the age structure and many more deaths in every other ethnic group than we would have expected to see. 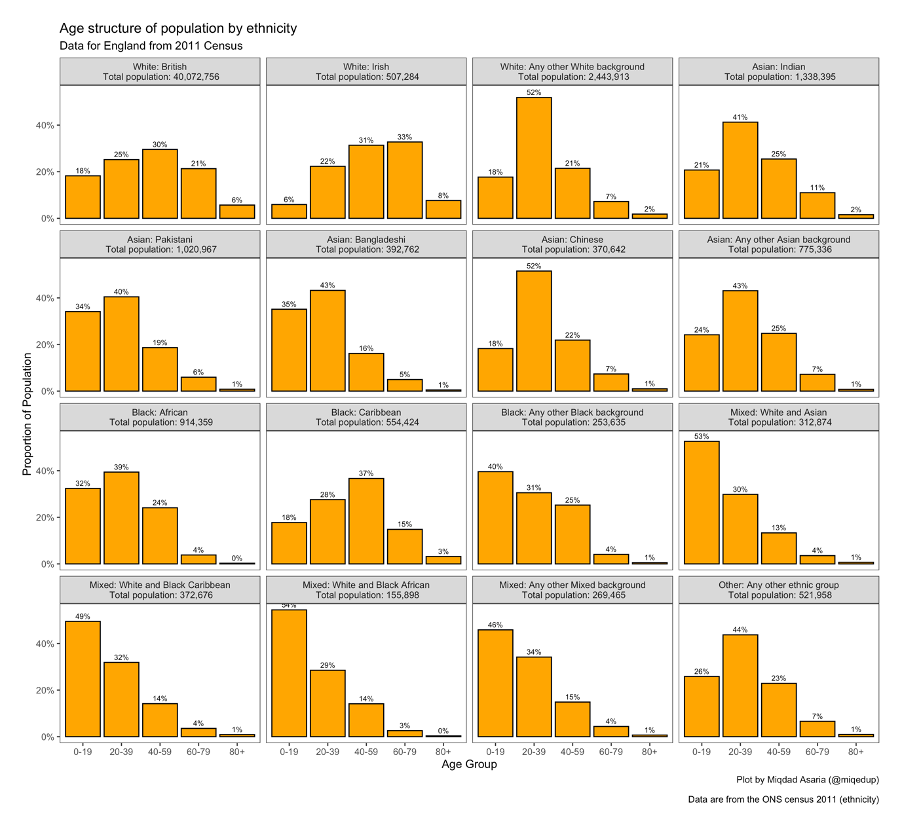 Applying the age specific mortality rates to each of these ethnic groups gives the results in the table below: 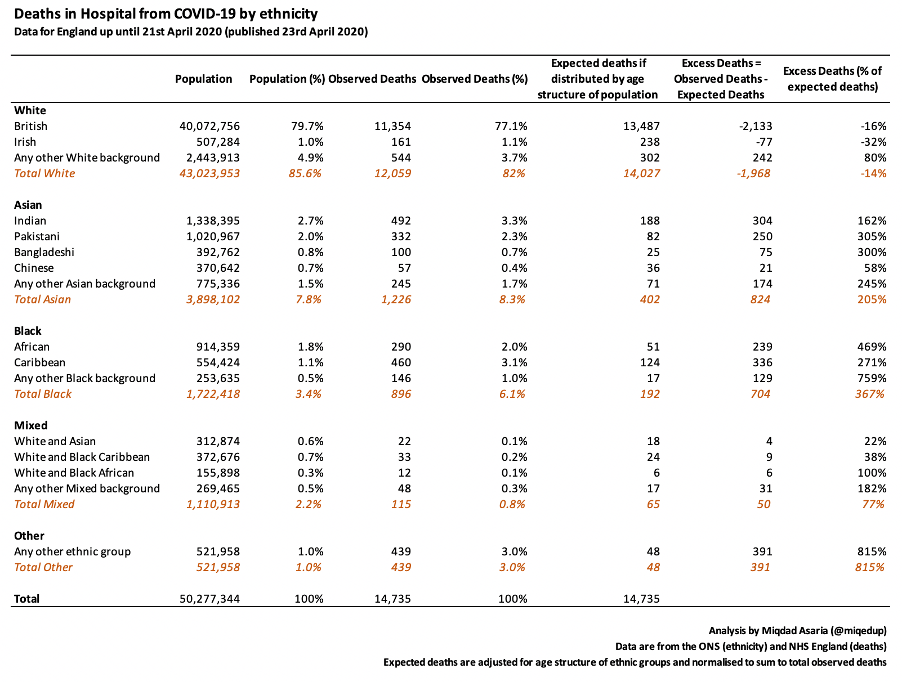 There were 14,735 deaths that occurred from COVID-19 in hospital up until the 21st April 2020 for which we know the ethnicity of the deceased. Comparing the distribution of these deaths that we observe with the deaths we would expect in each ethnic group we find that there are very significant numbers of excess deaths in the Black, South Asian and Other ethnic groups whilst there are far less deaths than we would expect in the White British and White Irish ethnic groups.

It is important to note that simply comparing the proportion of overall deaths coming from an ethnic group to the crude proportion of the overall population that people from that ethnic group make up, as has been typically done in the media, can lead to very misleading conclusions. As an example, looking at the Bangladeshi ethnic group, we see the proportion of overall deaths observed in this group (0.7%) is less than the crude share of the overall population who are of Bangladeshi ethnicity (0.8%) which may lead us to believe that they have done better than expected. However, once we calculate the age-adjust expected mortality for those of Bangladeshi ethnicity we find that we actually observe 300% more deaths than we would expect.

There are a couple of things that we should keep in mind when interpreting the data on hospital deaths. Firstly, up until 17th April 2020 hospital deaths have accounted for 77% of all COVID-19 deaths. There has been a recent steep increases in deaths occurring in care homes which account for 16% of all COVID-19 deaths. These deaths in care homes may have a different ethnic mix to those that we have seen in hospital.  Secondly, we are still at an early stage in the epidemic which has spread at different rates in different parts of the country. The age-adjusted figures presented here are based on national data on population age structures while the geographic spread of the virus appears to have been thus far more concentrated in areas of high BAME population. Further data is urgently required on deaths by ethnicity for deaths that have occurred outside of hospital as well as an age and geographical breakdown of deaths by ethnicity in all settings to get a better understanding of the true nature of excess deaths.

Similar patterns of excess morbidity and mortality in marginalised groups from COVID-19  are being observed across the world. What appears to be clear from the data is that there are excess deaths in BAME communities in England. Given this finding, it is a matter of great urgency that policies deployed to tackle this virus and the epidemiological and economic models used to inform these policies be adapted to look beyond the majority White community. Our response to the COVID-19 pandemic must cater for the whole population. Those who have thus far been disproportionately impacted either by the harms of the virus or by the negative consequences of the government’s response to it must particularly be prioritised. Simultaneously, we must embark on the long road to address the underlying racial inequalities in society that have been brought into such stark focus by this pandemic.

Miqdad Asaria is a health economist based at the London School of Economics and Political Science in the UK. His research focuses on the economics of health inequality. As well as his work in academia he has spent time working at the Department of Health in the UK and the Ministry of Health and Family Welfare in India.

Analysis code to calculate the excess BAME deaths in Hospital can be found here.

Further exploration of the ONS COVID-19 death data and the PHE COVID-19 cases data at local level can be found here.