Engineering Your Judiciary, or How the COVID Crisis Won’t Go to Waste

COVID-19 has already been used as a pretext for political manoeuvres, and we should expect more. An important area to watch is judicial appointments, which have gained salience as judges have become catalysts of social change by ruling on controversial issues like climate change, minority rights, and corruption. The COVID-19 crisis and predicted economic recession will provide an opportunity to tailor the magistracy to one’s political needs. We can ignore this uncomfortable reality or we can theorise how today’s pandemic will shape tomorrow’s judiciary. Here then are analysis, advice, and predictions on judicial staffing in the near future, pre-packaged for internal party use and pre-leaked to the public.

What to Expect
New developments require a look at precedent, which for COVID-19 means prior episodes of non-economic turmoil (plague, war, revolution) followed by economic contraction. We need theory to interpret past data and I use the internal labour markets approach from organisational sociology [1], which suggests that the quarantines and anticipated depression are characterised by contradictory tendencies. On the one hand, as non-economic shocks drain labour markets by calling people to serve, isolate, or die, many jobs are prematurely emptied: this creates a boom of promotion opportunities for those that remain. On the other hand, both anticipated and actual economic contraction make people cling to the security of current jobs, a tendency especially pronounced among civil servants [2].

The precedent I look to is occupational mobility among Romanian judges during the Great Recession (data and code available here). The comparison is imperfect because that recession did not follow a non-economic shock. Still, we expect the COVID-19 depression and Global Financial Crisis to be comparably severe [3], [4], and Romania’s judiciary is typical of civil law systems in Europe and Latin America. Imperfect, but a useful start.

The solid, blue line in the top panel of Figure 1 shows the number of judges leaving the judiciary each year (from 2007 to 2017 the total number of judges increased from 4000 to 4700). In two years (2008-2009) some 300 additional judges left the magistracy, above the non-recession departure rate. The bottom panel in Figure 1 distinguishes retirement probability by hierarchical level. The chances of leaving at the beginning of the recession grew for all levels, but increased most for the High Court (featuring roughly 110 judges per year), peaking at 20% in 2009. A one-fifth departure probability is huge, even for end-career positions like High Court judge.

Lesson 1: judges, especially senior ones, are more likely to leave early in a recession 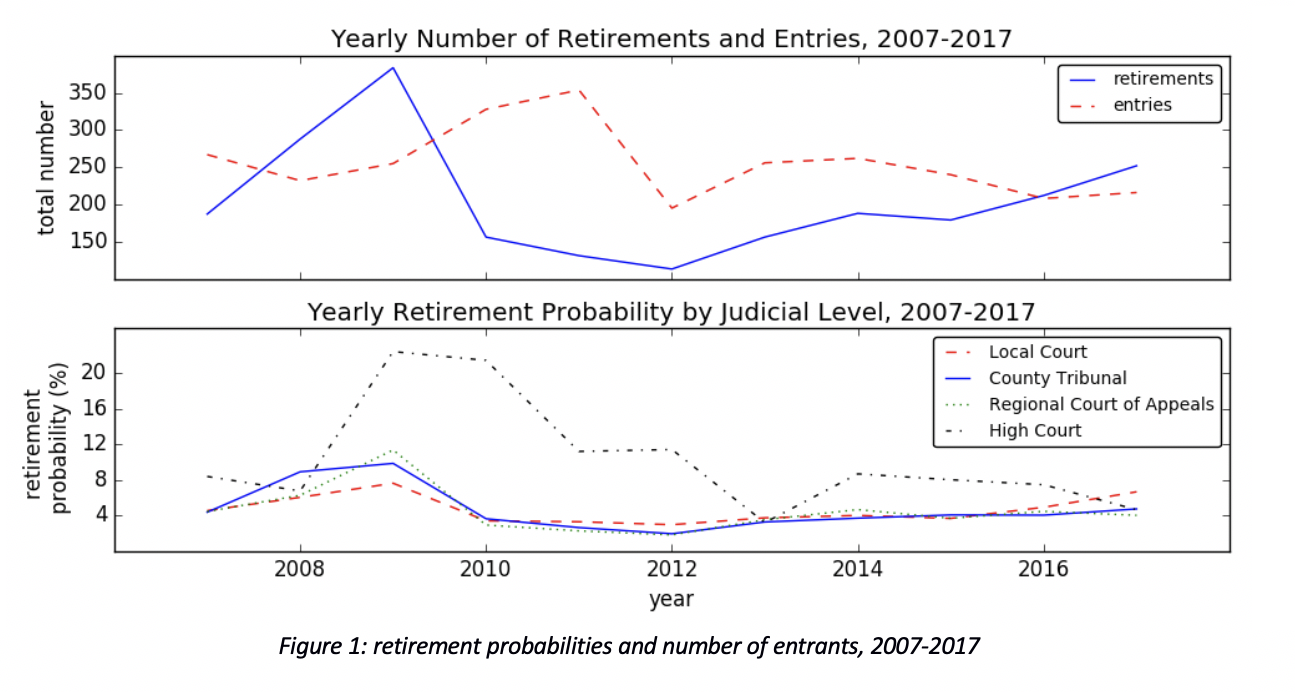 On the other hand, the red, dashed line in the top panel of Figure 1 shows the yearly number of new judges. When a rush of departures is not accompanied by the abolition of positions (and courts are almost never disbanded) we can expect a surge of opportunities for entry and advancement. Indeed, the wave of exits in 2008-2009 is followed by a spike in entries in 2010-2011, and the probability of promotion (e.g. from local court to county tribunal) peaks in 2009-2010 – see Figure 2 (Note: Promotion exams occur twice a year, on changeable dates, so exam passers may change workplace only the following year. Two-year averages smooth out this artificial variance.)

Lesson 2: larger entry cohorts and greater promotion probabilities make it easier to climb the ladder early in the recession

Finally, Table 1 shows cohort-level cumulated incidence of mobility five years after entry. In five years of activity the cohort of 2009 (which entered at the beginning of the recession when more of their senior colleagues were retiring; in bold) experienced more promotions and lateral transfers (e.g. between local courts) and fewer retirements. On the other hand, the unusually large, mid-crisis cohort of 2011 (underlined) experienced fewer promotions and transfers, and only slightly fewer retirements.

Table 1: five-year cumulated probability (in percentage) of promotion, lateral transfer, and retirement, and cohort size, by cohort year of entry

Engineering Your Judiciary
Having looked at precedent in judicial mobility, let us turn to three politically tactful principles of judicial appointment:

Combining these principles with the lessons from precedent generates concrete advice for using the COVID-19 crisis and anticipated recession to reshape the judiciary. You only have a two-to-four year window so you have to work on three fronts simultaneously.

Getting rid of inconvenient judges while they are eager to leave:

I close with four predictions for civil-law judiciaries: First, an initial increase in occupational mobility (both in-system and retirements) will be followed by a wave of new entries. Thus, case-load per judge will increase as the economy worsens. Second, small (crisis) cohorts will experience accelerated careers compared to large (mid-crisis) cohorts. Third, if one political coalition forms national government for most of the crisis, the ideological orientation of the national judiciary (especially at top levels) will shift towards that coalition. Fourth, consequently, justice will gum up just when it is most needed.

Radu Andrei Pârvulescu is a doctoral candidate in the Department of Sociology at Cornell University, USA.