COVID19: Expertise, transparency and the problem of trust

In an attempt to control the effects of the epidemic in the UK, the government has embarked on a strategy to control the narrative of the Covid-19 tragedy. This has led to a health emergency and there are signs that it could lead to a political debacle, too.

Ostensibly, Boris Johnson has resorted to listening to the best available science, symbolized by the first news briefing on 3 March where he appeared flanked by the chief medical and scientific advisors. The claim has been that the government would develop and adjust its course of action based on the science. This exemplifies the established way of dealing with such crises in the UK political culture: Its elements are a reliance on modelling provided by scientific experts, a risk calculation with the aim to disrupt life and the economy as little as possible, and to justify the policy with the ‘best available scientific evidence.’

This had been government practice, for example, after the Chernobyl radioactive contamination in the Cumbrian fells in 1986, in the BSE crisis of 1996, or the Foot and Mouth crisis of 2001. In addition, the government presents its policy after a period of internal discussion, without public scrutiny or participation. This is the real meaning of the science-based approach: the government does not want the public to have access to information on which decisions are based. Its scientific advisors are doing their work in private, and are not speaking out in public.

A few days ago the government’s Scientific Advisory Group for Emergencies (SAGE), after a long period of secrecy, has published a ‘consensus statement supporting the government response to Covid-19’. The statement is dated 2 March, one day before the PM’s first press briefing. In this short document key epidemiological statistics are shown: the reproduction rate (which indicates the number of secondary infection caused by a single infected person)  is assumed to be in the region of 2-3 which would mean that 80% of the UK population becoming infected in a doing nothing scenario. The doubling time of infections was assumed to be 4-6 days. While the former information was used when the ominous herd immunity strategy was announced, the latter was not communicated to the public in a prominent way, not on 3 March, and not thereafter. What is especially troubling is the absence of a clear communication that the disease is spreading in an exponential fashion, and what this would mean to the medical treatment capacity. In its briefings, the government prefers to show a logarithmic scale which makes the increase look linear. However, both infections and deaths follow an exponential function (see Figure below). 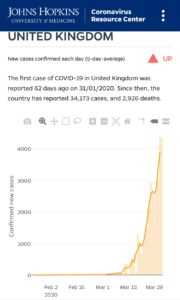 The SAGE document also contained information which was used as guide for policy. It argued that if control measures were taken to reduce contact, the peak of the epidemic could be flattened, but they were ‘unlikely to greatly reduce the overall clinical attack rate.’ Furthermore, more stringent measures were assumed to have greater impact, but this would lead to a large number of cases once they were lifted. School closures of 6-12 weeks were assumed to reduce the peak by 7.5%-25%. These statements were based on modelling and were meant to provide the best strategy to enable the NHS to cope with a surge in cases.

If the government had taken its own claim seriously (‘In fast moving situations, transparency should be at the heart of what the government does’), it would have laid out the seriousness of the challenge to the public, at the time.

In reality, the reference to scientific expertise has been an exercise in silencing the public. The government has waited several weeks when it was clear that the storm of a pandemic was brewing. It then made reassurances that (a) the government had a clear plan of action; (b) the country was well prepared; (c) there could be no debate about the plan because it was based on the best available science. The forum where these reassurances are made is in ‘the only theatre that remains open–the political theatre of daily briefings.’

Behind the scenes the government is scrambling to shore up public support, and managing expectations with regard to massive challenge to NHS capacity and preparedness. More successful policies in other countries must have been a concern, too. But learning from them, or following WHO guidance, was anathema.

Valuable time was lost by delaying stringent control measures. The NHS was under-resourced, with the shortage of staff, ICUs, ventilators, PPE and testing equipment being prominent problems. All of this was, of course a result of the government’s decade of austerity politics, and of a neoliberal orientation which does not see state intervention in society as desirable tool. Behavioural nudges, also known as liberal paternalism, is the preferred approach.

The elite press did not fulfil its function of critically examining the government’s actions. The Financial Times titled on the 28th of February ‘Are UK and NHS prepared for the coronavirus? Despite signs some health infrastructure under strain, infection-control measures appear to be working’.

On 12 March, The Economist carried the headline ‘Britain’s NHS is well suited to dealing with crises. But it is overstretched and faces an enormous task’.

Health secretary Matt Hancock tried to reassure the public: ‘Our world-class NHS is well prepared and we are doing everything we can to protect the public.’ However, less than 1 per cent of doctors feel that the NHS is ‘well prepared’ for the coronavirus, according to a poll. As a result, they are barred from speaking out.

With the crisis becoming more pronounced, the government stated that the virus was completely new, and too little was known to combat it effectively. This was said while in the background dead bodies were piling up in Italy and Spain, and after China and South Korea had implemented measures that led to a massive reduction in cases.

One of the few early critics, the editor of The Lancet, Richard Horton accused the government of having caused avoidable deaths by acting too slowly: ‘There was a collective failure among politicians and perhaps even government experts to recognise the signals that Chinese and Italian scientists were sending. We had the opportunity and the time to learn from the experience of other countries. For reasons that are not entirely clear, the UK missed those signals. We missed those opportunities.’

As David Edgerton points out, ‘The British state has always been good at making shrewd utilitarian calculations’. His examples are the minimal civil protection against German air attacks in WWII, and against a nuclear attack in the Cold War. In both instances Britain got lucky. However, ‘previous governments have displayed a willingness to preside over catastrophic losses of life, and an unwillingness to over-invest in expensive (and potentially unnecessary) defences.’ The same can be said about Britain’s principle for managing industrial pollution, which has the telling label Best Available Technology Not Entailing Excessive Cost (BATNEEC).

This mindset of British political culture has been flourishing during the past four decades. We need to consider the historical context of this. The modern welfare state is the result of reformist attempts to provide protection and insurance to the population (and this meant often: the disadvantaged). Food, air, the workplace, the environment and health were key concerns. These became central functions of governments in the 20th century. Health, social, and environmental legislation has been implemented, at a cost that nations were willing to afford.

With the rise of neoliberalism such government responsibility seemed misplaced. Instead, responsibility and risk were shifted onto individuals. Pretty much everything became a matter of personal choice. The response we have seen during the first weeks of the outbreak in the UK was based on the individual choice model with appeals to personal freedom and responsibility. Measures of ‘social distancing’ were brought into play, without making them compulsory. It took only a few hours for sports and entertainment organizers to announce the cancellation of big events. Large organizations followed. The government slowly came around to accept school closures, and then more comprehensive restrictions. There are doubts that the state has the resources to enforce these rules. Without civil society initiative and co-operation, the government’s lockdown would not be sustainable. Creating and maintaining trust is therefore of crucial importance.

The government has been mainly reacting. When the idea was aired that the best approach was to achieve ‘herd immunity’ of the UK population, by letting the virus run wild, this did not withstand the public outcry and after a few days the idea was dropped. The government claimed that this U-turn was the result of new scientific evidence. Several government announcements were justified with a questionable nod to ‘a change in the science.’ More stringent measures were justified on the (wrong) claim that the virus spread faster than anticipated.

What the Corona emergency shows is a lack of political leadership. Experts frame, select and interpret knowledge for decision and action. They need to be transparent and accountable. The example of the UK in the coronavirus crisis shows the opposite. First a reference to scientific research was used to justify inaction, now wartime rhetoric is used to justify more stringent action. The public is given the role as spectator. But the public is also victim, of the virus, and of government actions. It is high time it asserts its role as agent. It must be included in political deliberation. The current system and practice of ‘science-led’ policy making is not fit for purpose.

Reiner Grundmann is Professor of Science and Technology Studies at the University of Nottingham.