VIEWPOINT: Can the Prevent Review avoid the Trap of Policy-led Evidence?

The power structures inherent in fallacious justifications for counter-extremism are liable to generate skewed evidence for the forthcoming review of Prevent. These structures have already resulted in fallacious arguments in support of Government agendas to counter extremism. Counter-extremism is itself an expansion of previous policy to counter violent extremism. This expansion has been facilitated by the Home Office’s creation in 2016 of the Building a Stronger Britain Together programme. A recent boycott of the programme has raised awareness of its creation of a pseudo-civil society to provide coerced support for the State. There is a risk that this fake civil society will skew the findings of the forthcoming Prevent review, but a recent exhibition by the artist Navine Khan Dossos might present a model for how this can be avoided.

In her recent exhibition for The Showroom Gallery in North London, artist Navine Khan Dossos has repeatedly painted logos that are associated with Prevent until they cover the gallery walls. For those researching Prevent and who are daily troubled by its expansion, the experience of walking into the gallery is unnerving. For others, it has opened up discussions that might not otherwise have occurred. While I was there, the artist was talking to a plumber who was fixing the gallery radiators. Between brushstrokes as she painted yet another mural – for the exhibition is also a performance that mirrors the industrial scale at which Prevent initiatives appear around the UK and abroad – the artist explained how Prevent had turned British Muslims into a suspect community. The plumber asked, “like stop and search?” As a young black man in London, the use of  racist profiling to create a suspect community was all too familiar.

The exhibition is titled There Is No Alternative, a defence for Prevent that has twice been used by civil servants in conversations with me. It is an argument that was deployed to devastating effect by Margaret Thatcher. And, so common is this political argument that Roy Bhaskar – in  Scientific Realism and Human Emancipation – labels it as a “TINA Compromise Formation”. TINA formations are easy to spot as there is almost always an alternative. They represent a mistake in theory that leads to a potentially endless series of compromises, leaving us in a world of irrealism. For Thatcher, this left us with a fetish for the market and a compulsion to compete. We have since forgotten that the market is made (and can be transcended) by us and that we only choose to compete. The Credit Crunch and Austerity come to mind as further irreal compromises that we are committed to, but which rely on the same fallacious TINA formation as Prevent.

Other than the obvious fallacy that there is no alternative to Prevent’s casting of teachers and doctors as informants to the Police and intelligence services, there is a more fundamental mistake or TINA formation at the heart of Prevent. This is the mistaken proposal that extreme or radical debate is a predictor of future acts of violence. This is a fallacious proposal as almost any political theorist will tell you, the ability to express views that others might perceive as extreme or radical is what prevents people from having to resort to violence in a democracy. We silence these dissenting voices at our peril and Belgian political theorist Chantal Mouffe warns that to do so ‘lets death in’, a process that Derrida refers to as the ‘autoimmunity’ of liberalism.

A pillar of the Prevent Strategy is a duty for NHS workers and teachers to report signs of ‘radicalisation’ and ‘extremism’ in their patients and pupils and it is now widely accepted that this has resulted in a ‘chilling effect’ on political discussion in schools, universities and in medical consultations. For many whose salaries are now paid by the growing counter-extremism industry, this chilling effect and its harmful impact is self-evident. But, there’s an equally pernicious aspect of the Government’s approach to countering extremism that risks hiding such critique from the review of Prevent that was recently written into statute. The reviewer will need to see through: a complex network of inspection regimes that compel schools and NHS trusts to report the need for Prevent; hundreds of government funded fake civil society organisations; and, a multi-million pound advertising campaign by MC Saatchi to promote the fallacious need for counter-extremism.

Since the infamous Trojan Horse scandal in Birmingham in 2014, the schools’ inspectorate, Ofsted, have insisted that schools must implement Prevent to pass inspection. When Ofsted say jump, teachers ask how high, as a failed inspection can be career ending for a headteacher and creates a lot of work for others. So, local and school Prevent strategies started to be rapidly written and deployed around the country in response to the Trojan Horse affair. Since then, I have been repeatedly told by civil servants that they have surveyed headteachers who report that they are confident in their implementation of Prevent, something they have to say or risk a career ending Ofsted judgement. This is claimed to be evidence of the need and acceptance of Prevent, a fallacious claim that might be best portrayed as an example of policy-led evidence. These feedback loops that create evidence to suit policy can be seen in other professions and I’ve been told by social workers that they’ve made referrals to Prevent for people who they do not regard as ‘extremists’. They do so as they know that the shortage of services under austerity mean that those in need are not getting the support that they require, unless they label them as an ‘extremist’ to get them to the front of the queue. As numbers of referrals to Prevent are used as evidence for the need for the strategy, this represents another example of a feedback loop for evidence to suit policy. It is in this climate of an ever-increasing, yet fallacious, need for Prevent that the Government have embarked on a continued expansion of programmes to counter the imagined threat of extremism.

At the heart of the Government’s response to the supposed threat of extremism is the Research Information and Communications Unit (RICU) of the Home Office. Formed in 2007, RICU was tasked with Counter Terrorism Communications Guidance and ‘communicating effectively with community audiences’. Asim Qureshi and Ben Hayes have since reported the extent to which RICU has created organisations that they present to the world as grassroots community organisations. Qureshi and Hayes show us that organisations such as Families Against Stress and Trauma (FAST), the Armed Forces Muslim Association, and many others masquerading as civil society organisations are in fact the product of “top PR agencies and new media companies to target young people who fit the profile of ‘vulnerable young Muslim’, RICU’s interventions represent the first concerted foray into cyberspace by the British state with the aim of covertly engineering the thoughts of its citizens”.

RICU’s focus when formed was on countering violent extremism (CVE), but the Home Office has since shifted the focus to countering extremism (CE). We may never know if this shift is due to inevitable mission creep or a more cynical expansion of a blunt tool of governance. Despite my repeated questioning, civil servants have not been able to explain how countering non-violent views that they perceive to be extreme is compatible with democratic government. Fundamental to the loss of focus on violence has been the formation of the Building a Stronger Britain Together (BSBT) programme. BSBT is run out of the Home Office’s Counter-Extremism Unit in collaboration with MC Saatchi and offers ‘in-kind support and grant funding for specific programmes that deliver goals set out in the Counter Extremism Strategy.

At the time of writing, BSBT was providing support to 233 organisations around Britain. Off the back of years of austerity driven budget cuts, it is perhaps not surprising that so many housing associations, faith groups and sports clubs have signed up for the £63 million of counter-extremism funding and support that BSBT offers.This had largely gone unnoticed until the Bradford Literature Festival was boycotted by a number of high-profile speakers. Poet, activist and writer Suhaiymah Manzoor-Khan explained that she was not prepared to take part in a BSBT funded event as to do so would legitimate counter-extremism. As is accepted by many academics, she explained that she did not want to legitimate counter-extremism as it is founded on a racist premise that criminalises Muslim communities.

The boycott of Bradford Literature Festival has raised awareness of organisations that are struggling for funding being forced to go cap in hand to the Home Office and MC Saatchi. As there is a need to ‘deliver goals set out in the Counter Extremism Strategy’ to access this funding, it is reasonable to suggest that there is an incentive for these organisations to speak out in support of the Government’s counter-extremism agenda. It is in this context that it is particularly alarming to see from their Twitter account that the supposedly independent Commission for Countering Extremism has been gathering “evidence” on the need for counter-extremism from the BSBT projects that are paid to offer this support. 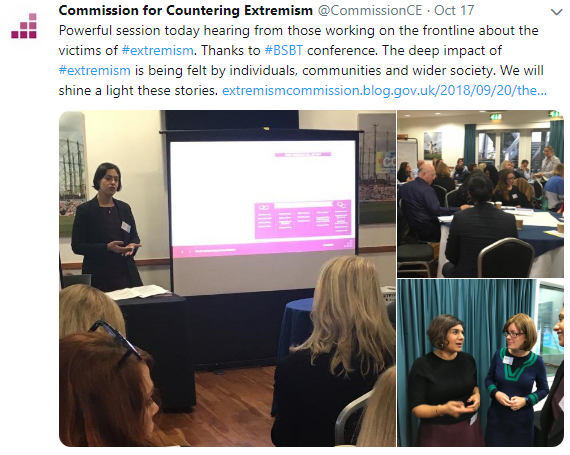 Žižek warns in Living in the End Times that democratic mandates might lead to the oppression of minorities and argues that civil society is the only real foil to government power in a democracy (p.158). That the British Government has created a network of pseudo-civil societies to support their nadir of oppressive policy, leads one to question what mechanisms might be left that could moderate the state’s ever expanding oppressive powers.

In Khan Dossos’s exhibition, the artist is present and paints in a studio that is linked to the street via open garage doors. People who walk in off the street can use a news, policy and literature archive that has been collected to learn about Prevent and they are encouraged to leave behind their own notes and to take away copies of documents that are of interest. Khan-Dossos has taken her work into the street to create a genuine community experience that has not been skewed by the budgetary and inspection powers that extend from central government. The artist’s industrial reproduction of Prevent branding across the gallery walls represents the spread of Prevent across the UK. The creation of an authentic discourse about Prevent by taking her work to the street might present a model of how a review of Prevent needs to reach out into communities and beyond those who are threatened or paid for their support.

Rob Faure Walker has been a school teacher in London since 2005. He is a PhD researcher at the Institute of Education, UCL.

Image: There Is No Alternative by Navine Khan Dossos