I was 14 in 1979 and remember hearing something on the radio about where we lived, but it was pronounced incorrectly (in a posh way) by the BBC broadcaster as “Suth’ll” (soft “th”). It’s very strange to hear the place where you live, where you’ve been born and brought up spoken about in a “foreign” way. It made me, as a teenager who’d been born and bred there feel defensive (“that’s not our place – you don’t even know our place). Southall was perceived by many outsiders to be primarily an Asian-Indian community, (a few years later I even saw it referred to as a “ghetto” in a Sociology books – imagine that?). Let me set the scene for you …

I grew up in a small cul-de-sac. There were approximately 35-40 houses on my road, which included white British, Asian and Irish families ….. Among the Asian families on the street, were a Pakistani Muslim household with three girls and two boys. A primary school friend of mine (Irish origin) had lived next door, but they emigrated to Australia. Then a couple of doors along was my Mum’s best friend – white British I suppose, with four boys. A few doors down there was a South Asian family from South India or Sri Lanka. Next door to them lived a Punjabi Sikh family (I knew this because their eldest son wore a turban). Then there was another white British family, us, our semi-detached neighbours, an older couple (very house-proud), another white British family, an Irish family. Right at the bottom of the cul-de-sac lived a white British family with two daughters at work and a mixed couple, (the wife was Austrian). Then there were two mixed Hindu-Punjabi Sikh families next door to each other (where none of the fathers and sons wore turbans, but they had lots of pictures of Gurus holding up one hand hung up on their walls, or Ganesh and Goddesses sitting on Tigers). The first family had about seven sons and one girl – can you imagine being that girl growing up then with seven brothers! The youngest boy didn’t want to go to school for a while and used to hide in our tree in the mornings when I was very young, but my Dad found him one day and it all came out… 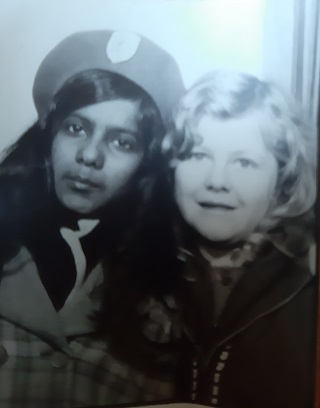 Then there was my friends’ house – two Punjabi girls who arrived when they were 4 & 6 (with two older brothers) – a mixed Hindu-Sikh marriage I believe. Their mum didn’t eat any meat, (my Dad was vegetarian so I knew about these things), but she was really strict – you couldn’t even make stuff with a wooden spoon or put it in an oven that had had any meat in/on it, so we couldn’t exchange food. This is the house where I spent quite a lot of my childhood playing, eating sabhji and roti, sleeping over and watching TV late, watching my friends sweeping and making roti and their grandmother grate onions without ever crying(!). Where I had my hair plaited and oiled so tight that it brought tears to my eyes and was immersed in Punjabi culture from “Daddy-ji, roti kaania?!” to the Dad drinking whisky, to the Mum (Auntie-ji) holding up a one woman protest and crying in the front-room for several days – for some reason I never learned. The family that I attended temple with, the Auntie-ji that I went to work with one day when she cleaned at the airport (while my Mum was working) and at lunchtime all the Indian ladies sat down on a big cloth and ate sabhji from thermos flasks and roti. The friends that I saw being bussed off to school and didn’t understand why they couldn’t go to the same school as me when we lived on the same road. The friends I ate with, slept next to, played catalogues with, learned to draw princesses from.

Next door to them were two older white British brothers, another white British family with two older boys, a gap in my memory then a Ugandan Asian family who had escaped from Idi Amin, whose daughter I used to skip in the street with, and whose little sister loved my dad so much she always used to call “Mitter Eeton! Mitter Eeton!” whenever she saw him … Then it went white British for a bit with the family of a washing machine mechanic, until another family my Mum knew who had 2 boys I think, and some dogs. Another best friend who lived round the corner had curly black hair and her parents were Catholic from Singapore (I remember the pictures of Jesus’s with golden halos on the wall). They all wore western clothes. Round the other corner from our road was a white British family with fours girls (he was a carpet-fitter and used to get off-cuts of lino for us – very handy).

So this was our road, very mixed by 70s standards, built on long-term friendships and the exchange of favours (childcare/play, the loan of a bike, exchanges of recipes and Indian sweets, advice and equipment for aches and pains etc. – my Mum, a nurse, so often informally consulted). The passing over of a window broken by a football once the glazing was paid for, the eyes on the children in the street.

From this mix I learned that Pakistani men wear white embroidered caps and baggy trouser suits, you take your shoes off when you go in a Pakistani house and they cover their carpets and that the oldest brother is usually called Mohammed. I learned (but never truly believed) quite how much fabric there is in a sari. I learned how to make roti on open gas, and goglai and special cornmeal roti with saag. And I learned to count to 20 in Punjabi. If, as the graffiti near the station said, you needed a passport to enter Southall, then I surely had one. I genuinely never really understood the cryptic “I’m glad we got out” comments of (white) school friends I occasionally got invited to tea with, who’d moved out. I just didn’t get it, what did they mean?

Sadly, I also learned that sometimes white people, even children, said unpleasant things to my friends, called them names when we went swimming, or said that they smelled of curry. And later, the ones who moved out, got spat at almost daily on the way home from school. I learned the word “racism”, and I’ll never forget the visceral reaction of my mother the day the NF (National Front) delivered material through our front-door. She said she felt like someone had just put sh*t through our letter-box. She felt sick to her gut.

Although things had been pretty peaceful for a few years for us white Britishers who didn’t experience the daily insults and incivilities of racism, let us never forget that the community had already experienced the brutal murder of a young student Gurdip Singh Chaggar (still remembered) a few years earlier in 1976 within a mile of where we lived. An event which had shocked my Mum so much she had transported me to attend school in semi-rural Somerset and live with my grandparents for several months.

On that day – 23rd April 1979, the trouble was up at the Broadway – which was the centre of town, but we lived in “Old Southall”, which was a good 1.5 miles away (we had no car). We knew that the National Front – a racist organisation had organised a meeting at Southall Town Hall, and that hundreds or thousands of people had organised a protest along the Broadway in response. I wasn’t there but what I heard through the community grapevine and via my left-wing parents was this:

That the protestors, many being from India, were very familiar with the tactics of Gandhi, and sat down in the Broadway (Southall High Street) to protest peacefully. However, the police came and started pulling up peaceful protestors, in some cases disrespecting their religion by pulling off their turbans and in some cases pulling some of their hair out during this process.

We heard that Blair Peach, a teacher, had been bludgeoned and had died of the resultant head injuries. A young Sikh man, a neighbour from a family a few doors up the road, came to ask my Dad if he would be a character witness for him. He had gone to the Broadway to go to the bank and been accosted and arrested by the police. My understanding was that most of those cases were dropped but that the police officers involved did not face prosecution. Neither was Blair Peach’s murderer ever brought to justice.

Sue Easton is a researcher in social and spatial inequalities based in Sheffield.