ON THE FRONTLINE: Travelling the Line, British Commuters and Southern Rail

Since its takeover by Govia Thameslink Railways (GTR) in July 2015, the performance of Southern Rail – never good – has been abysmal. For 18 months, the number of delays and cancellations has been well above the national average, but since April 2016 problems have been further exacerbated by a series of conductor and driver strikes (organised by RMT and ASLEF unions), bringing the whole network to a virtual standstill for some days in December 2016 and January 2017. Overall, nearly 60,000 trains were cancelled in 2016 alone. It is not surprising that Southern was identified by Which as the worst performing Train Operating Company (TOC) in the UK.

With Southern Rail carrying around 300,000 passengers a day on a sprawling network covering suburban London, Surrey, Sussex and connecting coastal towns from Portsmouth to Eastbourne, the impact of Southern’s woes on passengers and the region as a whole has been palpable. Our personal experience as parents and commuters chimes with the many commuter narratives shared on social media relaying how the ongoing unreliability of service affects those managing an already precarious work-life balance. The failure of a key infrastructural asset such as the train network exposes the fragility of everyday arrangements concerning care for the family, and indeed for the self, as pick-ups, bedtimes and appointments are missed. Long held assumptions informing decisions about work, study and residence are challenged. Families, relationships, employers, “freelancers” and ancillary businesses all suffer as earnings are lost; one study calculated the economic cost of Southern Rail strikes as £300 million. For all, commuting has become a stressful, degrading, and often dangerous experience, as trains and platforms become overcrowded and uncertain departures cause unpredictable movements of people.

How have Southern passengers responded? Polly Toynbee called them “a rather spineless crew”, noting that there had been a general lack of civil disobedience. However, her recommendation that commuters glue up ticket machines to reduce revenue demonstrated a lack of understanding of the peculiar constraints to direct action faced by Southern’s passengers. It is true that many have borne unacceptable conditions stoically. However, a significant minority have not: they have organised and started fighting back, calling for transparency and accountability in the relationship between government and the rail company and protesting vocally at stations and at the door of the Department for Transport. We would here like to reflect on both of these aspects of commuter responses, seeking, on the one hand, to explain the lack of involvement in direct action of the majority and, on the other, to assess the protest actions that there have been so far, and their longer term potential.

So, let’s start with explaining a lack of direct action. There are, in our view, a number of interlinked demographic, structural, and political factors that contribute to this, of varying importance. Firstly, as Toynbee and others suggest, Southern passengers appear to exhibit stereotypically ‘British’ traits, such as politeness, willingness to queue and ‘not wanting to make a fuss’. As anthropologists we are somewhat sceptical of this ‘national trait’ kind of argument; however, the everyday experience of commuting during the Southern crisis has been characterised by people responding to the disorder on the network by interacting with platforms, trains and other commuters in, mostly, orderly ways. Grumbling is displaced to social media which hums with complaints threads and shared images of overcrowded platforms and trains. Commuter comments highlight collective suffering, ways of coping, and decry instances of selfish behaviour by others. The contrast between real time descriptions of journeys shared on social media between commuters, often on the same train, written angrily or with heavy sarcasm, and the quiet of the train carriage, is striking. But why does this grumbling seldom become vocal protest?

Apart from the sheer danger of platform riots, a significant contributor, surely, is that the people most affected, regular commuters, are time poor. Having spent several hours on the train in addition to their working day they may think themselves too busy, and too tired, to engage in direct action. Compounding this issue is the fact that the experience of commuting, getting on and off at different stations, using trains at different times and for different purposes, is an individual one. As James Meek has pointed out, most people do not identify with trains in the same way as with, say, cities. While some regular commuters – ourselves included – find themselves in the same train and carriage and seat several times a week, and recognise equally habitual fellow travellers, each is focused on completing an individual journey.

The individualised travel experience is further enhanced by the widespread use of digital media for work and entertainment, which means passengers have less need to interact with each other. Indeed, the large number of passengers watching serials or reading the free newspapers distributed outside stations evoke Horkheimer and Adorno’s analysis of the ‘culture industry’, preventing people from developing political consciousness.

Most important, however, is that, for the majority of users, trains present the only viable form of transport, and that GTR have a de facto monopoly in the region. As a large number of regular commuters are also season ticket holders who have paid for travel up to a year in advance it is hard for them to simply abandon Southern trains, or to protest by boycotting GTR trains. Polly Toynbee can apply glue to ticket machines if she likes, but the opportunities for Southern commuters to exercise their powers as consumer citizens and withdraw from the relationship are extremely limited.

So what about accountability from above? In an era characterised by organisational cultures of audit and performance measurement we might expect that the failures on the Southern network would engender sanctions, but again the promise of accountability is stymied by a peculiar set of circumstances. Since 2015 GTR has managed the network for a fixed fee, paid by the Department of Transport. Thus Southern do not depend on ticket sales for their revenue. There is a compensation scheme, known as Delay Repay, which travellers can apply to when journeys are delayed or cancelled. Southern is compensated both by the Department for Transport, for claims made, and by the government owned Network Rail company for disruption due to track and signalling problems. Only a minority of passengers actually make Delay Repay claims. As a result Southern profits at taxpayers’ expense when trains are delayed or cancelled. Similarly, strikes increase revenue as staff costs reduce but earnings do not. Public understanding of the situation is not aided when waters are deliberately muddied by the Government. With the exception of two MPs in Brighton and Hove the region covered by Southern is a Conservative party stronghold. Conservative MPs from across the region have made numerous interventions in parliament and the media blaming the trouble with the trains on intransigent rail unions and militant staff, deflecting attention from the cosy relationship between GTR and the DfT. The Southern case has been used as an opportunity by some MPs to gather public support for strengthening laws on strike action. Heated arguments on social media indicate divisions between commuters blaming unions and those supporting them, which again has made collective action more difficult. 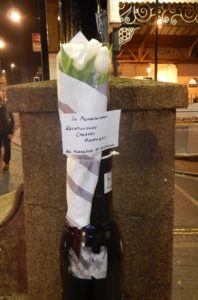 Nevertheless, commuters have mobilised, in various and interesting ways. If commuters do not agree on the politics behind the rail crisis then they do come together to mutually critique, and offer advice on, everyday problems with the train system. Social media have enabled passengers to rant (in particular on the appropriately named Facebook groups ‘Southern Rail Sufferers’ and ‘We Hate Southern!!!!!!!!!!’); to share information (e.g. about cancellations, stations to avoid due to overcrowding, or the intricacies of ‘Delay Repay’); and to draw attention to their daily travails, such as with the hashtag #southernfail. Through Facebook and Twitter, commuters have also organised and staged innovative protests. In January 2017, for example, commuters organised a three day protest in which fake memorials of flowers and cardboard headstones commemorating ‘the death of our patience’ were left at railway stations. 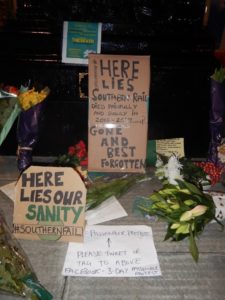 The most active and sustained campaign has been run by the Association of British Commuters (ABC), formed in September 2016. Like other Facebook groups, the ABC has enabled commuters to share stories, information, jokes, advice, newspaper articles and TV clips. But it is also an important platform for debate, both around campaign and protest strategies, and around the causes of Southern’s problems. Moreover the ABC has organised several well publicised demonstrations at London Victoria Station and a protest march to the Department for Transport. ABC actions have often deployed a humorous aesthetic to capture headlines. The group presented a toy train set as a Christmas present to the Secretary of State for Transport, Chris Grayling, and has promoted Twitter campaigns, such as the hashtags #FailingGrayling, and #MySouthernStory, where passengers use the SouthernFail App to produce and share their own satirical memes mocking Southern publicity posters.

The ABC have made a more serious intervention however in applying for a Judicial Review of the relationship between the DfT and Southern’s parent company GTR. The £25,000 required to instruct lawyers to prepare the case was raised by a crowdfunding appeal in just few days. Here then was a collective action that time poor, law abiding commuters, wary of more confrontational forms of direct action and unwilling to be involved in action that would cause further delays on the rail system, could get behind. At the time of writing, we are still awaiting the Government’s response, which is scheduled for 21st March. But it may be that it is this form of commuter activism – an appeal to apparently objective rational-legal arbiters beyond polarised and obfuscatory arguments about the efficacy of industrial action – that stands the best chance of making commuter voices heard, of exposing Southern’s failings as an operator, and of, perhaps, eventually forcing some improvements in rail transport in the region. Let’s hope so!

Martin Webb is a lecturer in anthropology at Goldsmiths and a commuter. His research interests include transparency and accountability activism and the political aesthetics of protest. Pauline von Hellermann is a Senior Lecturer in anthropology at Goldsmiths. Her research interests include governance and corruption – in the forest sector and in public transport. Both authors are Southern commuters and involved in multiple passenger action groups.