The Democratic Faces of Romania’s Caring Resistance against Corruption

The Romanian #Rezist movement began on the 31st of January 2017, in Bucharest following the legislative move of the Romanian government led by prime-minister’s Sorin Grindeanu to uphold an emergency decree (OUG 13) which expanded its’ powers by decriminalizing corruption (the basic tenement of the law is succinctly explained in the picture above). As the news hit the media, it was followed by an immediate response from the citizens of Bucharest, who congregated the next day, in front of Government at Victory Square. The movement quickly grew from 60.000 protesters to 150.000 protesters in just 2 days, gathering external support from European politicians, music celebrities and the communities of Romanians living outside of Romania, in the UK, France and Belgium. Multiple articles appeared in the meantime detailing the Romanian political climate (see Alina Mungiu-Pippidi; Sebastian Burduja; Isabela Mares; Diana Margarit; Henry Rammelt, Washington Post’s editorial board) so I will refrain from explaining it here. What I would like to focus instead is on the faces of the protest and the people’s determined attitude to set this protest apart from previous violent clashes which marked the 1989 communist revolution. The protests were rather reminiscent of the 2013 mass-rally against a foreign corporation’s exploitation of gold through the corrosive means of cyanide-mining in the newly Unesco-protected site of Roșia Montană.

The latest protests have bridged some divides, while creating others.  For example, Doinița Baboianu quickly became a representative image of the #Rezist protests due to a passionate plea to the protesters to keep fighting, which was caught on camera and distributed on social media. She was quoted as saying: “Fight children! Innocent children, fight! Your future is in the hands of these dogs”. Doinița’s anguished voice made an impact as it spoke to the current class divisions brought on by the capitalist reshaping of Romanian society (Doinița works as cleaning lady for a company to earn enough to survive, as her pension doesn’t suffice), and pleaded for justice from the bottom-up by employing signs of symbolic faith (by crossing her chest in prayer as is customary in the Christian-Orthodox faith). Her image created a striking visual impact during a political climate in which nationalism and religion are covering ground as solid alternatives to the precariat and impersonality of capitalism. 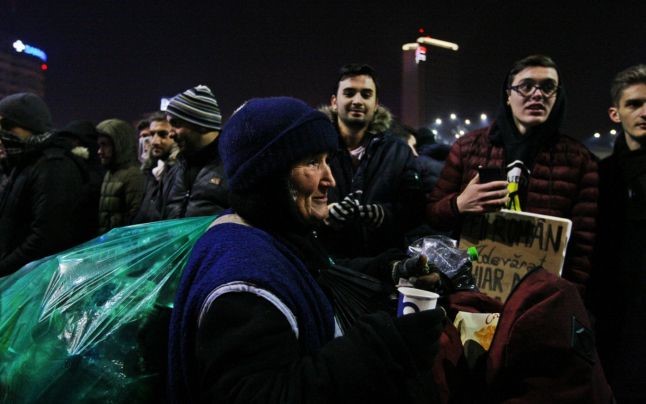 In an online interview published by the newspaper Adevărul/The Truth,  Doinița was furthermore quoted as saying: “I am a widow, and a mother (…) I am proud that I am Romanian, and I ask them and anyone else (…) to continue to be proud that they are Romanian. I want us to love each other. I want there to be justice, in an amicable way”. Doinița’s words sound appealing to a younger generation struggling to define a national sense of identity, but there are some worrying parallels drawn between love and national pride, and conscribing the protesters to the role of ‘innocent children’ in relation to an authoritarian paternalist state. Even if the act of daily protesting increased solidarity among the participants who synchronized themselves one night and lit up their mobile phone to create a dazzling sea of lights in Victory Square, the majority of protesters continues to be divided. The younger generation’s voting apathy shown through the decreasing numbers of voters registered at the last elections in November 2016, which offered the PSD party a ruling majority; their protesting prowess, however runs contrary to the ageing population’s nostalgia after a communist past where their daily needs were state-supported (and controlled). This explains why concomitantly with the larger anti-governmental rally both inside the Parliament as outside of it, there was also an anti-presidential protest in front of the Cotroceni Palace.

A particular caring ethic lived throughout the protests. One fruit merchant, Constantin Paraschiv distributed fruits and water freely during the protests. Protesters exchanged hot drinks among themselves and with policemen, distributed sheets on how to remain safe during protests, or sent their children to offer them tulips. In an exceptional situation, a group of policemen attacked a protester that actually was an under-cover police-man, showing not only the ambivalence of anger during protests (Holmes, 2004) but also its misguided expression through gratuitous violence. 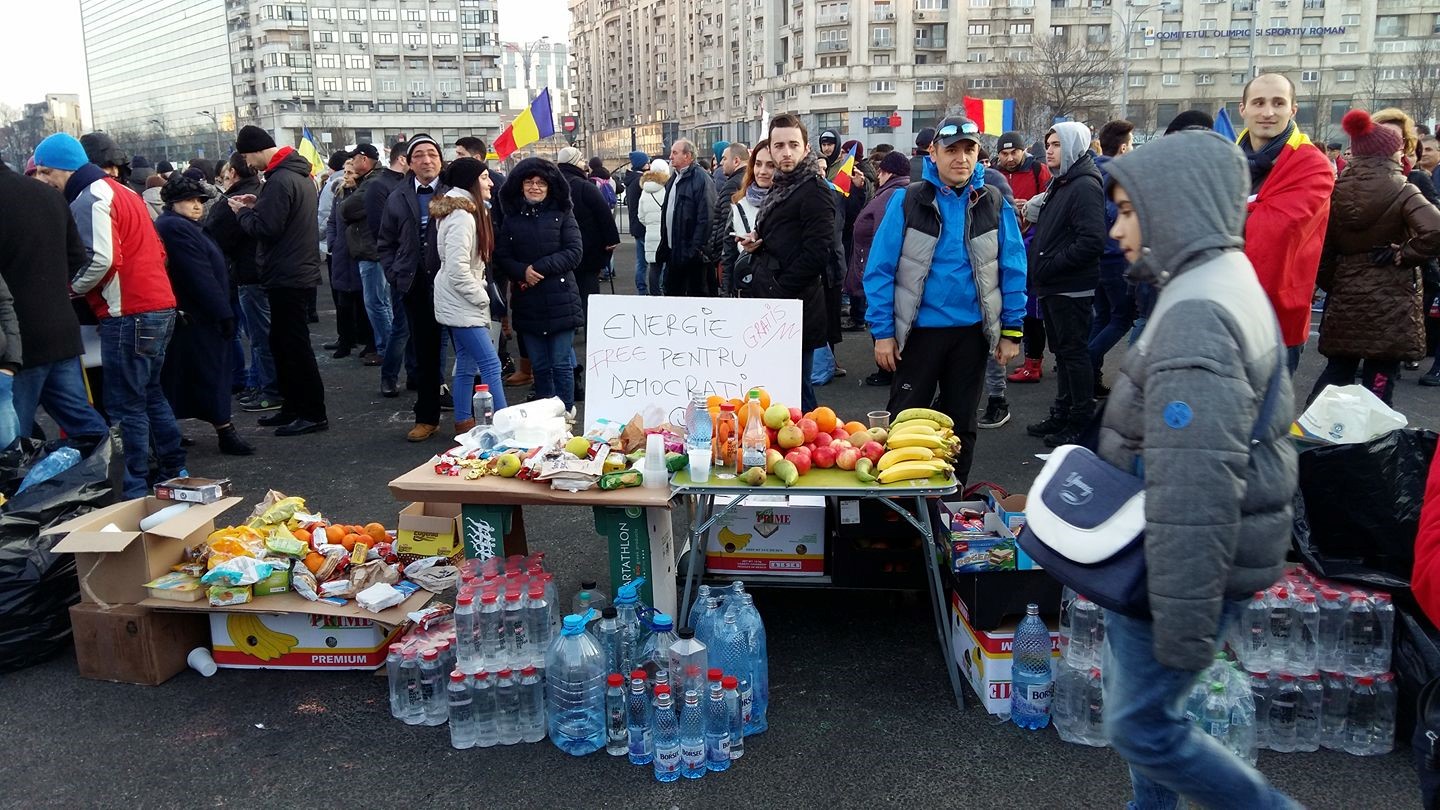 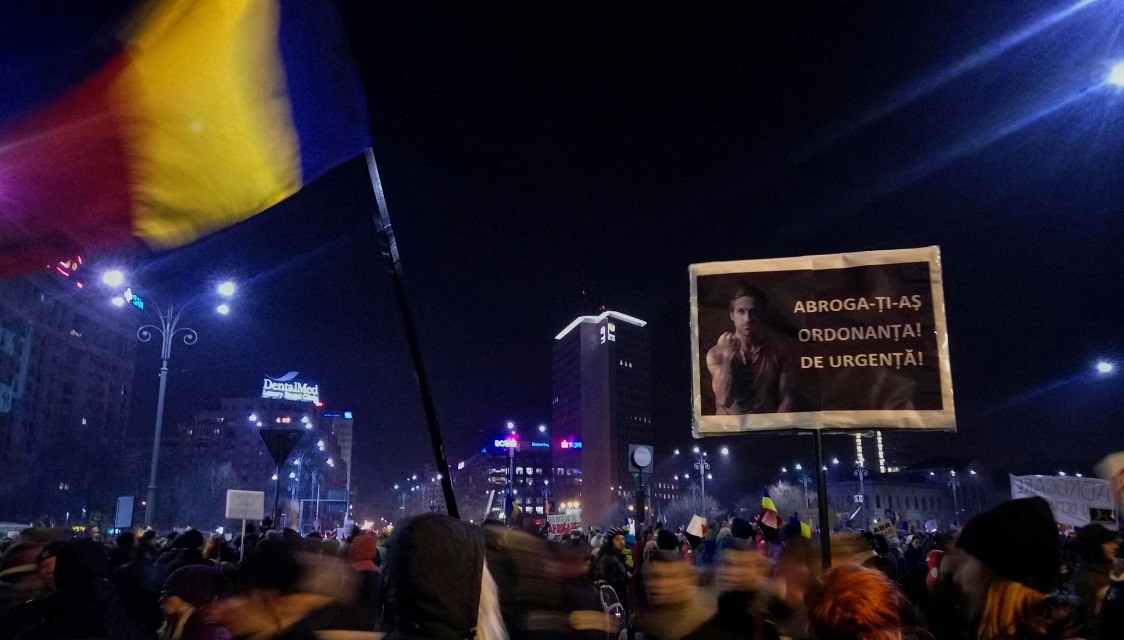 Protesters took an initiative to clean up the streets after each day of protesting. Social media proved essential in spreading the message quickly to a large number of people, as Facebook was used to set times to meet and gather the debris. This practical gesture had a symbolic meaning as it showed a commitment to both environmental protection and safe-guarding the idea of the country as a location Romanian took care of; protesters also differentiated themselves as clean and honest citizens, in contrast to the corrupt and tainted image of the politicians. Helena Flam (2004) has argued that life under repressive regimes created in its citizens a sense of muted anger, dissimulated through humour and satire during protests. However, the general atmosphere of the #Rezist protests was one of joy and celebration. People expressed their collective effervescence through dancing, singing the national hymn, marriage proposals, and by bringing their neighbours and even pets along (in what the BBC has called ‘puppy politics’), all of which took place in the frosty climate of the month of February. Protesters displayed passion and care, rather than anxiety, even if the emotions which compelled them to take to the streets were mistrust, anxiety and anger. However, visually-subversive anger was shown in banners which used Western cultural references for comedic effect and empowerment, such as Feminist Ryan Gosling or dressing up as Darth Vader. 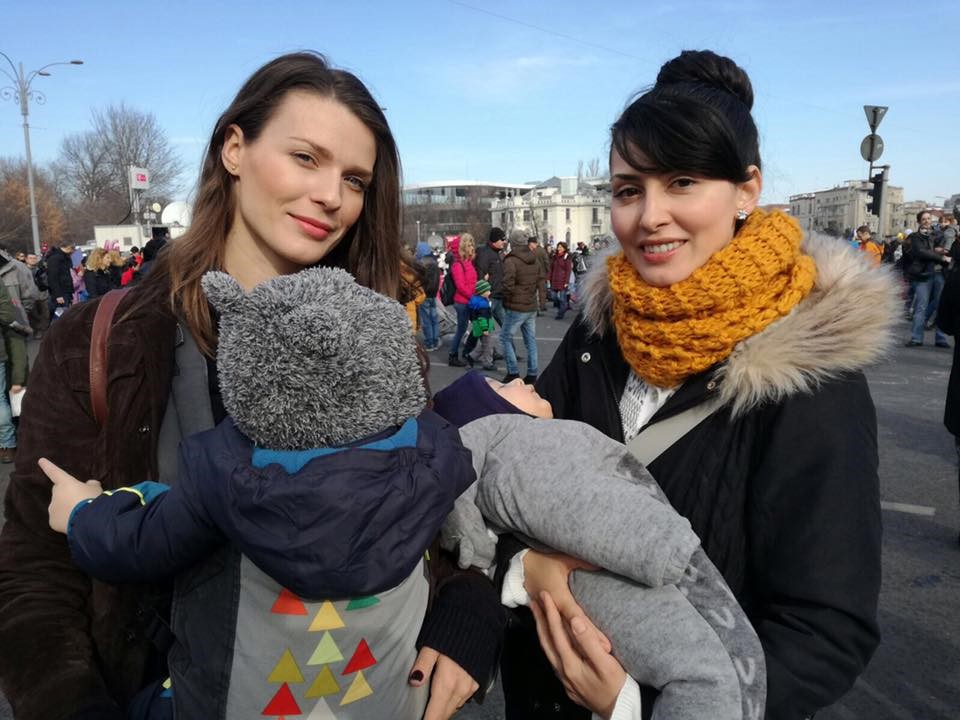 Parents combined the educational with the political through the use of foldable little tables where children could draw and do their homework. Children’s participation in the #Resist movement was essential, as they embody hope for the future and the quintessential necessity of maintaining a democratic dialogue between the state and its citizens. Children helped as well to preserve the non-violent nature of the protests, as a strategy to deflect the anger of opposition (Flam, 2004). The public involvement of mothers was especially visible on mornings during the weekends, because it was restricted to their children’s schedule, although mothers with older children would bring them weekdays after work.  I would suggest that Romanian women’s participation marks a point for considering maternal feminism, removed as it is from just the image of ‘grieving mothers’. Romanian mothers’ showed optimistic perseverance, passionate concern for the future, and increased determination to transform anger into justice. Their political involvement was expressed in practical and empowering ways: providing care for participants and rallying others to participate, maintaining the front-lines of the barricade, negotiating with the authorities, publicizing events on social media, supplying caring and managerial functions.

In response to the inclusion of children in the protests, the mayor of Bucharest, Gabriela Vrânceanu-Firea declared that parents should be fined by Child Protection services for infringing their children’s rights (a statement she later retracted and denied). The attempt at ‘criminalizing’ families who have protested, shows that a) having a female leader does not ensure the promulgation of feminist policies, and b) underlines the tense relationship between government representatives who maintain authoritarian post-communist political practices, and the protesters, who desire to cultivate a civic spirit among their young, by including them in democratic processes. It needs to be mentioned that a patriarchal gender order continues to dominate Romanians’ social relationships, as gender blindness and collective discourses of ‘we’-ness maintain inequalities. Married women or mothers, usually gain a certain social status which is denied to young or single women.

It certainly seems that people power can still enact change. The government has backtracked on the decree, but it has not resigned and protests are ongoing. The #Resist movement is associated with the preservation of the people’s democratic power to correct governmental abuses, in an increasingly divisive socio-political European landscape. For Romanians, at least a sense of national identity seems to be forming out of the active practice of democracy, as they are reshaping their image under the gaze of Western nations.

Alexandra Macht is a PhD researcher at the University of Edinburgh and the Centre for Research on Families and Relationships. Patiently awaiting her Viva and applying for jobs in Sociology in the increasingly precarious landscape offered by the job market, she fills her time with teaching and crafting the findings of her thesis into articles. Constructive idea-exchanges are very welcomed at amacht@exseed.ed.ac.uk or follow @Alexandra_Macht.