Collecting statistics on partner abuse within same-sex relationships is notoriously difficult. The invisibility of the population allied to people’s reluctance to report domestic violence to the police means that the nature and extent of police reported same-sex partner abuse (SSPA) is largely unknown.

To try to overcome some of these difficulties and build a picture of SSPA, I used Freedom of Information (FOI) requests to collect data gathered over a 1 year period by all UK police forces to explore who was reporting, what was being reported, how much risk people were seen to be at, and what the outcomes were for people experiencing SSPA. I was also particularly interested to see if any of these factors differed between men and women reporting abuse within same-sex relationships. This data forms part of my PhD thesis, which is being carried out alongside a Knowledge Transfer partnership (KTP) project looking at improving police response to coercive and controlling behaviours.

Limitations of the data
Of the 43 forces approached, 12 provided usable statistics (28%), outlining incidents reported to them which had been logged as crimes on their systems. Due to all police forces using different systems to record their data, some were unable to provide the data I had asked for as their systems were not capable of filtering, others did not provide the data due to the possibility that the cases may be able to be identified, and the rest did not provide data as to do so would exceed the time/cost regulations outlined by FOI guidelines. Overall, I had access to the data from 915 individual cases of SSPA from the 12 forces, which were spread throughout the UK.

Crime types
The first area I was interested was the types of crimes recorded by police for men and women in same-sex relationships. It can be seen from the table below that crime types recorded for men and women were remarkably similar. Assault with injury crimes made up the majority for both men and women, followed by assault without injury. This is interesting  as the general perception within UK society is that males are more violent than females, so we may have expected that significantly more men would have committed assault with injury crimes than women.

Outcome of cases
Having gleaned this information about crime types, I was interested in the outcomes for the crimes identified above. It can be seen from the table that evidential difficulties made up the largest proportion of outcomes for both men and women. The primary reasons why this might be are: a) the police were unable to gather enough evidence at the scene to enable successful prosecution, b) the police or the Crown Prosecution Service decide that the evidence is not strong enough and drop the case or c) The victim withdraws their statement or refuses to support the police. It is the latter that was of most interest within this research. Of all the cases below recorded as evidential difficulties, approximately 66% were marked as ‘victim does not support police action’.  It is not possible from the data to determine the reasons but it is possible that they were either unwilling to support police in the first place, or withdrew their statement at a later time

Previous research has suggested that people experiencing SSPA can be reluctant to involve the police for many of the same reasons as heterosexual women – for example, personal reasons such as they love their partner, they may fear being isolated if their partner was taken away, or may rely on them financially, as well as structural reasons such as fear that they or their partner may experience homophobia from the police and be treated unfairly (Donovan and Hester 2011).  Regardless of the reasons, ‘victim does not support police action’ made up a large proportion of outcomes for SSPA victims and the reasons need to be explored further.

Risk levels
The next factor explored was the risk levels assigned to incidents by police. Risk levels are important as they often determine the level of support that a victim will receive following an incident. The current risk assessment process used by the police has three levels:

Medium: There are identifiable indications of risk or serious harm. The offender has the potential to cause serious harm but is unlikely to do so unless there is a change in circumstances, for example, failure to take medication, loss of accommodation, relationship breakdown, drug or alcohol misuse.

High: There are identifiable indicators of risk of serious harm. The potential event could happen at any time and the impact would be serious.

As part of the FOI request, I asked for data regarding the risk levels that were assigned to each case of SSPA. The table below shows the findings.

It can be seen that although a similar percentage of men and women were rated as medium risk, men in same-sex relationships were much more likely than women to be rated as high risk by police. As demonstrated earlier, crime types committed by men and women were very similar, and so it would be reasonable to assume that risk levels associated with crimes would also be similar, but this was not the case. Of particular interest are risk levels associated with assault with injury and harassment crimes, set out in the table below: 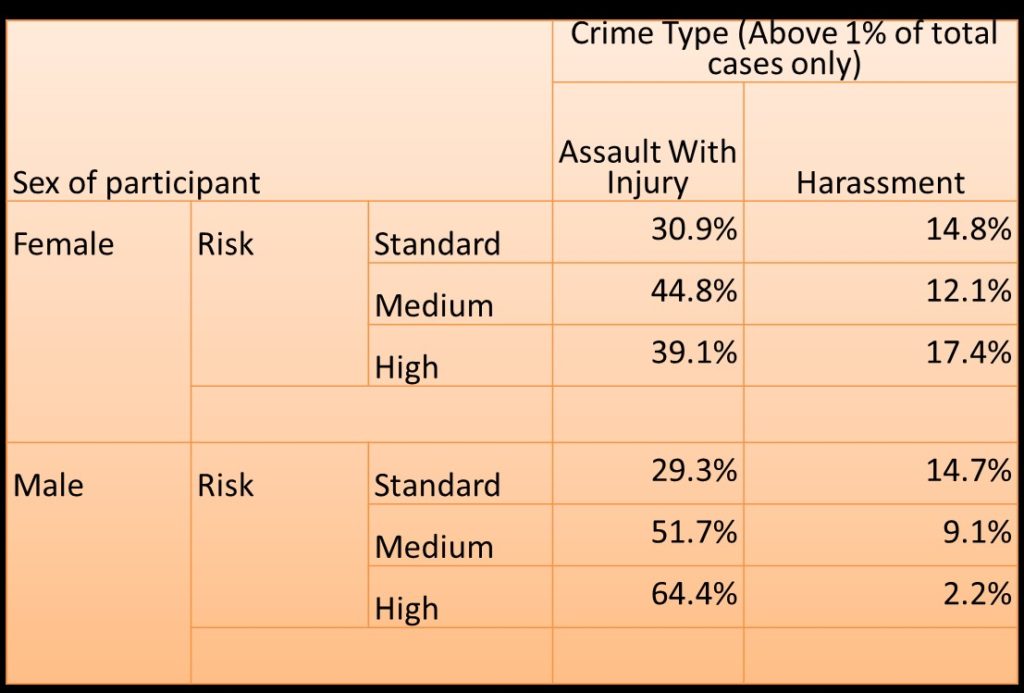 It can be seen here that significantly more men are rated as high risk for assault with injury crimes compared to women. Conversely, many more women are rated as high risk for harassment than men. The reasons for these risk ratings cannot be determined from the data provided, however there are several possible reasons for these differences. When considering why men are rated higher risk for assault with injury than women, it may be that the injuries men had received from their partners were more severe than those received by women from their partners, so men’s risk ratings are higher. On the other hand, it may be that police officers’ perceptions are that men are more violent and likely to cause severe harm, and so they raise the risk level accordingly. In terms of harassment, women may be more likely to be rated as high risk from their female partner compared to men from their male partner as police may view female victims as more vulnerable. Similarly, they may believe that men ‘should be able to deal with it’, and therefore as less susceptible to being at risk.

Food for thought
The information from the FOI requests tells us that when considering incidents that are reported to the police, men and women in same-sex relationships are committing the same crimes and receiving the same outcomes. However, police assess risk levels differently for men and women, and one possible explanation is gender assumptions.  The differences in risk levels between genders could suggest that police are conforming to the societal view that men are strong and can cause harm, so that incidents involving two men are rated as higher risk for assault with injury, whereas women are perceived as weaker and more vulnerable, so their risk levels are not deemed as high. In order to explore this hypothesis further, amongst other factors, interviews are currently being carried out with police officers, professionals from support organisations and survivors, to build up a more solid picture of police response to same-sex partner abuse.

Reference:
Donovan, C., and Hester, M. (2011). ‘Seeking help from the enemy: help seeking strategies of those in same-sex relationships who have experienced domestic abuse. Child and Family Law Quarterly, 23(1): 26-40.

Kate Butterworth is a Research Associate within the School of Applied Social Sciences at Durham University. She is also a member of the University Centre for Research into Violence and Abuse (CRiVA), dedicated to increasing knowledge about interpersonal violence and abuse and to improving professional and societal responses’.