The everyday life of a fish market

Billingsgate fish market is a fascinating social space for exploring the working rhythms and routines of market life, observing interactions between buyers and sellers, and recognising the important role of the fish itself. Constituted by an Act of Parliament in 1698, Billingsgate is the UK’s largest inland market and London’s wholesale fish market, and has been located in East London since 1982 after several hundred years in the City. Fresh and some frozen fish and seafood is sold to catering firms, hoteliers, processors and fishmongers as well as to the public (to the latter most often on a Saturday), but not to supermarkets. It’s a self-contained site of exchange and redistribution, tightly defined in time and space. The earliest time that fish can legally leave the market is four o’clock in the morning. The market officially closes at eight o’clock but if traders are slow to pack up you might still find something for your dinner a little later than that. In this article, I want to concentrate on the work that wholesale fish merchants, and their sales employees do in getting fish onto your plate.

Like many market spaces, Billingsgate is vibrant, teaming with life and liveliness, banter and playfulness. The market hall is the central site of display, interaction, movement, negotiation and exchange, and it is where trade can be seen and heard. Billingsgate’s traders are mostly white, working-class men over fifty alongside more recently established south Asian and Indian sellers. The buying and selling of fish is a slippery business: quite literally, and for the ways in which the practice of trade escapes our grasp. It is a socio-economic, cultural and interactive process that relies on multiple evaluations, performances, practices, skills and senses, and this makes it especially interesting for sociologists to study. I spent several months at Billingsgate losing myself in the rhythms, noises, tensions, buzz, chill and thrill of the place, and hanging out with – and later interviewing – fish merchants, inspectors, and porters, trying to understand how trade happens. In the following discussion, I consider three aspects of the everyday life of the market: the care of fish, relations with customers, and the temporality of the sale.

A key part of the labour of fish merchants and salespeople is to tend to the fish in order to promote its value. Stands display samples of fish, which are ‘staged’: ordered, iced and maintained in an effort to sustain quality and aesthetics. Such care requires precision. Knowing the fish, the texture of the flesh and the pressure to apply are part of the everyday sensory understanding of the fish merchants, accrued through routines repeated over years. Although the fish is no longer living (eels and lobsters excluded), it’s as though it is not quite dead either, but in a liminal state gleaming with water and light. Indeed, the best fish is ‘stiff alive’ – still in rigor, this ‘liveliness’ perpetuated in part through the fish merchants’ labour.

The fish make their presence felt through their fleshiness, sheen and watchful gaze – as in the image above. Roger Barton, a well-known fish merchant, comments: ‘You can see it’s oozing with freshness, it’s shiny, it’s really shiny, it’s literally looking back at you’. Fish merchants and salespeople talk about fish with feeling and attachment in a register of love, curiosity and beauty, in contrast to the disgust sometimes encountered in the general public – the fish must be animated in the minds of the buyers to close the deal. However, while the merchants seek to stabilise the fish as an object of value, the just-dead fish do things, showing themselves to be capable of independent action as they nonchalantly perish, losing value as the clock ticks, threatening the ability of human actors to achieve their goals. Timing is critical. Brian Roper, a long-established and well-respected salesman, comments: ‘…these aren’t antiques, you know. We can’t, we can’t just store them, [laughter] you know. Take, bring them out later, somehow’.

Indeed, fish that is deemed to be ‘unfit for the food of man’s body’ (Fishmongers Company Charter, 1604) and may be ‘condemned’ by the fish inspector (as indicated by a ‘C’ on a red square of paper placed on the offending fish) or ‘surrendered’ voluntarily by fish merchants. When fish – and the fish merchant – come under the regulatory gaze of the fish inspector, the mood is intense. The inspector’s decision to ‘condemn’ fish is a financial and symbolic blow. 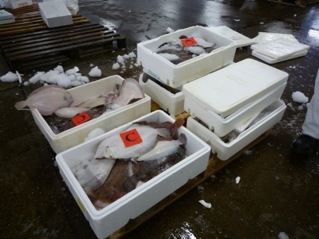 Trade at Billingsgate takes place ‘pair-wise’, that is, in a one-to-one negotiation between merchant and buyer (as opposed to an auction for instance). Prices are clearly posted but they are not fixed: ‘It’s a face to face deal really and every deal’s an individual deal so because I charge you X doesn’t mean I need to charge the next customer X’, comments Brian. Social interaction, then, is crucial to how trade happens. The sound of the telephone – there’s one at every stand and plenty of mobiles – is a reminder that trade takes place both in situ and beyond the spatial boundaries of the market floor.

‘Your reputation is only as good as your last fish’, warns Brian. If the fish is not the quality buyers have paid for, they will just ‘push it back’ he explains, and in any case, ‘bad deals leave a bad taste in your mouth’. There’s a mutual recognition of skill and knowledge on the part of different actors in the trade and a commitment to a shared future. These are ‘long-term relationships’, comments Jim Dillon, a salesman with considerable knowledge of fish, which means ‘you’ve gotta try and keep your customers earning […] we want them coming back’, hence the importance of trust across quality, pricing, availability and turnaround time. Loyalty from customers is rewarded with getting your fish: when there’s ‘a serious shortage […] it will be your most loyal customers who are top of the list who you will sort out’ (Brian).

Jim emphasises the importance of ‘get[ting] the fish into the system’. However, ‘if the fish is very good to begin with […] if someone was to come up and offer silly money for this fish, you don’t have to accept it […] because it’s got another three, four, five days life in it’. In deliberately withholding fish in this way, or in matching it to specific buyers, the merchants shift register: ‘You can see the fish just glistening and you think to yourself, I’ve got just the customer who’ll buy that…’ In this instance, Roy has come to mind. It’s the sight of the fish that makes this happen, a connection between sensory understanding and social relation. While he [the customer] ‘is still in bed, he [the fish merchant]’s sold it to him’, Jim’s colleague, Tony, chimes in excitedly. Anticipation is key.

There is both ‘a feeling for’ the game according to Jim and active thinking evident in these accounts of making a deal. On deciding to hold back or push forward with the sale Jim reflects: ‘there’s lots of small indicators that you just pick up on, probably pick up on without realising’, a semi-conscious visual awareness of what’s going on in the market that ‘take[s] a few years’ to develop, adding ‘we don’t overanalyse it’. We can also see the capacity of the fish to make things happen as they age. They bring about a process in which the fish merchants must make evaluations and take action. 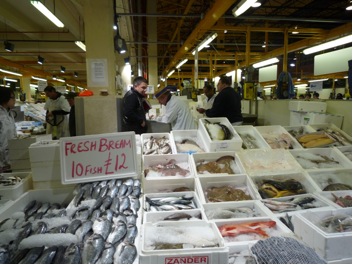 Often at his stand by two o’clock in the morning, Roger (pictured above) starts making calls at around four, offering his best customers ‘first refusal’, updating them on yesterday’s orders and planning for tomorrow. He is managing stock, price and customer relations along multiple temporalities. Indeed, orders are not singular moments but processes, moving forwards and backwards in time. Roger recognises the temporal character of his work and the broader setting within which he operates: ‘I’m on call twenty-four hours a day – and I’m dependent on the weather.’ He enjoys plotting ahead but recognises the impossibility of managing the many dimensions of uncertainty that characterise the fish trade.

‘Say we bought cod fillets for 40 quid, and we’re now going to have to sell ‘em for 30 quid, sell ‘em, cos the next day you’ll only get 25 or 20 for ‘em. So, as the saying goes, the first loss is the best loss. […] you got to make less mistakes than you make good judgement. You can’t always get it right, I mean I don’t know if it’s going to rain the next week every damn day, and you’re going to stay indoors and think oh, I’m not going to go to the fish markets today, we’ll get something out the freezer. Now you’re not going to the fishmonger, he’s not going to sell you that fish, and therefore the next day I’m not going to sell him any more fish cos he’s already got some.’

In this reflection Roger clearly recognises the relationship between his practices and yours for what ends up on your plate.

Research into the everyday life of a fish market reveals it as full of interconnecting activities and attachments across people, objects and fish, all of which make the market happen. There is considerable skill and competence in the ordinary achievement of the sale. At the same time, the significant uncertainty around sourcing fish and securing deals in the right timeframe means that fish merchants live with the risk of failure at frequent turns. There’s more at stake than meets the eye when shopping for fish.

Dawn Lyon is Senior Lecturer in Sociology in the School of Social Policy, Sociology and Social Research, University of Kent where she has worked since 2004. She has undertaken a visual ethnography of Billingsgate fish market exploring skill, value, the organisation and rhythms of work, affective relations across the human and non-human, and sensory and embodied labour.