The Gender Politics of the 2016 Taiwan Election: One Feminist’s View

There are countless annoying things about being a citizen of a country that does not have normal international status.  An obvious one is that the only way to exercise the right to vote is to actually be there.   Therefore, in the middle of January 2016, I had no choice but put my PhD research aside and go back to Taiwan to vote.  I was carrying my feminist anger with me all the way from Manchester to Taipei.   That anger had been burning for quite some time since there were so many ridiculous comments made by or about candidates in the campaign.  Below are some of my personal ‘favorites’.

On a political TV programme, a Kuomintang (KMT) candidate and retired general, Hu Jhu-Sheng, made a comment about the case of Hong Jhong-Ciou.  Hong was tortured to death when he was fulfilling his compulsory military service in the army.  Hu said, ‘if everyone in the military is like Hong Jhong-Ciou, Taiwan would have become a women’s state.’  Hu was not expressing this opinion with an appreciative tone.  For this retired general, a woman’s state would be a total disaster in a military sense.  According to the narrative in his words, Hong, the cruelly murdered male draftee was compared to a woman.  At first glance, it was obviously a comment insulting a man, but it was actually a sexist comment about women’s professional ability.

In insulting men by insulting women, Hu was not alone.  Lin Yu-Fang, another KMT candidate, stated clearly that he had some issues with men having long hair.  Freddy Lim from The New Power Party was Lin’s biggest rival in the campaign.  Lim was previously best known as the vocalist of a Taiwanese heavy metal band, Chthonic.  His long, straight, black hair is a distinctive personal feature. During the campaign, Lin tried to convince the voters that he was a better choice by launching a morality attack on Lim.   Lin asserted that Lim was abnormal and it would be dangerous to allow this man with hair even longer then some women to be a Legislator.

During the election, women were not only devalued by discriminatory comments as a generalized group but also as individuals.  Hsiao Bi-khim, a Democratic Progress Party (DPP) candidate, has been a long-term advocate for same-sex marriage.  This stance became the material for her political opponents to undertake a smear campaign and label her as a killer of heterosexual marriage.  The female DPP presidential candidate, Tsai Ying-Wen, was also one of the popular targets.  Tsai’s male rivals had been very opinionated about her being single. They expressed ‘suspicion of her sexual orientation and questioned her ability to understand the needs of married people. About ten days before Election Day, the Chair of New Party, Yok Mu-Ming, found something new to say.  He criticized Tsai, saying she would be a leader who brought danger to the country because she is single and therefore cold-blooded and ruthless.

My feminist anger was also mingled with my feminist expectations.  From the reaction of the general public, I knew that I was not the only voter fed up with these sexist, misogynist and heteronormative remarks.  Since the Occupy Movement in 2014, the already lively social movements in Taiwan have become more vigorous.   There is a civil society desperately looking forward to a new politics that appreciates gender equality, human rights and Taiwanese Independence.

So on the night of 16th January 2016, Taiwan elected Tsai Ing-Wen (DPP) as the next President and her party won a parliament majority.  This news soon caught international media attention.  On the issue of the Taiwan-China relationship, the DPP as a pro independence party is expected to have a different standpoint and approach from the KMT.  Tsai’s win is therefore interpreted as the beginning of a new era of cross-strait relations.  Also, the fact that she is the very first elected female and single president has a significant political meaning.   A French newspaper, la Libération, points out that Tsai is a female politician with a distinctive background.  Unlike other well-known female politicians in the world, such as Aung San Suu Kyi, Park Geun-hye, and Hilary Clinton, Tsai does not come from a political family.  She is not the wife of a politician, the daughter of a politician or the widow of a politician.

Tsai’s single status also has a significant meaning in local society.  Before Tsai, all the presidents we had were men with ‘ideal heterosexual families’.  To represent the male candidate as a family man with a wife and children is often part of a campaign strategy.  In the case of Tsai, her campaign team has deliberately prevented her family members from having any media exposure, except for her two cats, Xiang-Xiang (or ‘Think Think’) and Ah-Tsai.  Yes, she is a single woman living with two cats.  This has proved to be a smart move for image management and brought friendly attention from cat lovers and even fans of manga culture.  An artist, NISIN, has created a series of manga works about Tsai.  The title is The Presidential Level of Maonu [總統級貓奴].  ‘Maonu’ is a Chinese term which is equivalent to ‘cat lover’ in English.   The literal translation is ‘cat slave’.

Moreover, for some supporters, Tsai’s ‘unconventional family’ is an example to show that there are alternative ways of constituting a family in modern society.  The Family Diversity Campaign remains strong in Taiwan and has gained more and more support.  It is a movement that promotes marriage equality, civil partnership system and multi-person family system.  Tsai and many elected DPP legislators have publicly endorsed their support for marriage equality.  Activists and supporters are now waiting to see them fulfill their promises.

Tsai’s win soon became a touchstone of gender equality in Taiwan.  After the election, there was discussion about who should be appointed as the new president’s bodyguard.  There is a general expectation that a female president should have a female Chief Bodyguard.  However, because of the military ranking rules and system, only military officers who have been granted title higher than Lieutenant General could acquire that position.   There is no female military officer who fits that condition.  This is a perfect example to demonstrate that having the first female president does not bring an end of gender inequality.  It is a milestone but not the goal.

On the very next day after the election, my friends and I had dinner together.  We were celebrating the big political change in Taiwan.  We did not exactly vote for the same candidate and the same party but we are all pro gender equality, pro democracy and pro Taiwan independence.  We shared what excited us as well as what disappointed us in this election.  We cheered for Hsiao Bi-khim’s win and felt upset for Miao Poya’s loss. There was also enthusiastic discussion about Doris Yeh.

Doris Yeh is the leader and the bass player of the band, Chthotic.  Yeh is also Freddy Lim’s partner.  From the very beginning of the campaign, she clearly stated that she did not like the idea of being addressed as Lim’s wife.  She preferred to identify herself as a volunteer and avoided standing next to Lim as ‘his wife’ in order to keep her own independent image.  In the latter stage of the campaign, she regarded the political situation is too critical and she believed that Lim had to win in order to change the situation.  She then offered her help to perform the role as a candidate’s wife with a condition:  after the election, Lim has to wear a band with print saying ‘Ye Xiang-Yi’s husband’ [葉湘怡人夫].  ‘Ye Xiang-Yi’ is Doris Yeh’s Chinese name. Therefore, on the night of the Election after knowing that he had become a member of the Legislative Yuan, Lim posted a photo on his facebook page showing him fulfilling this promise.   This is one of those stories that did not catch international media coverage, but has interesting and significant implications about gender in Taiwan.

While I was listening to my friends’ conversation, I looked around the table and I saw faces of feminists that I can rely on.  Most of them were there for the Occupy Movement.  Some joined The Observers, a civil group that organizes volunteers to scrutinize balloting.  They have been on the street to demonstrate their solidarity for the women’s movement and LGBTQ rights.  They all fight against everyday sexism in one way or another.  Although none of them has a political career, they are the ones who keep the momentum in Taiwan to push gender equality further.  Because of them, I do feel that there is more to hope for the future.

Chin Ting-Fang is a PhD student in the Centre for Women’s Studies at the University of York.  Her research explores women’s experience of gender at work in Taiwan with a focus on everyday practices.

Image credit: Manga work by NISIN. Reproduced by the permission of the artist. Clockwise from top right, the first dialogue box says ‘Xiang-Xiang and Ah-Tsai! I finally got elected!  I missed you two so much…’.  The second one says ‘The cat litter is full…’  The third one says ‘The Presidential Level of Maonu.  Yes, this is the title of the book’. 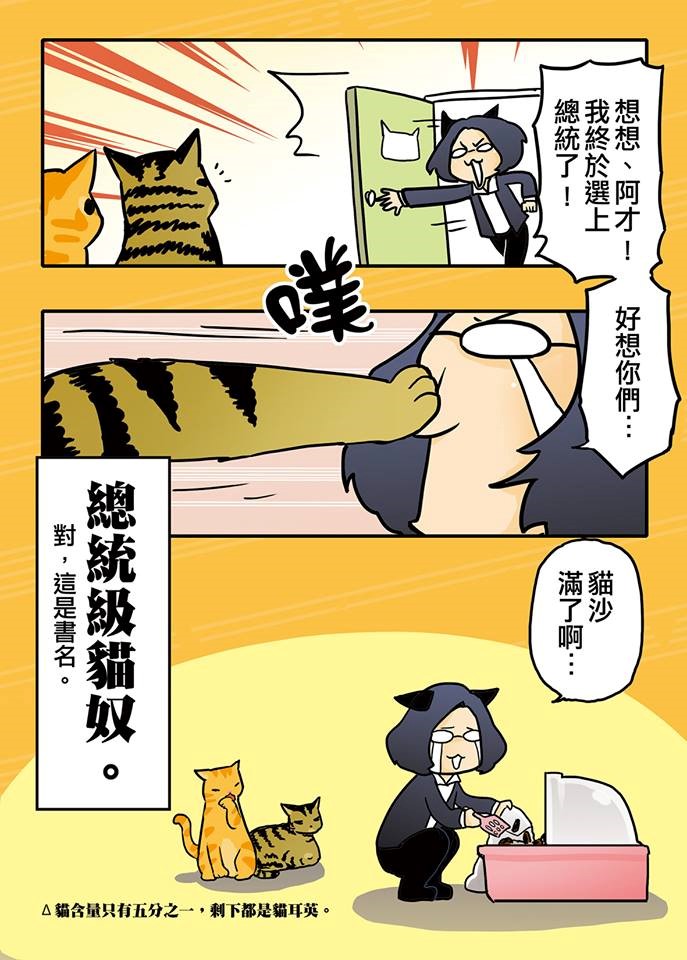