Blue collar Conservatives on ‘welfare’ and housing – who really benefits?

Emphasis in the Conservatives’ narrative on ‘welfare’ and housing reforms has been on “making work pay” and “being on the side of working people”, which suggests that social security cuts and policies such as Right to Buy have been thought to strike a chord with blue collar voters. Our purpose here is to examine what really sits behind the rhetoric of blue collar political messaging by analysing some of the core policies brought forward under Cameron’s first 100 days in government. We suggest that another picture emerges which questions the extent to which these policies indeed support ‘working people’. Instead, different parts of the population stand to gain from blue collar conservatism: pensioners and existing homeowners, in effect, the asset-owning class. Our reflections on ‘blue collar conservatism’ also extend to the use of language for the purposes of “divide and rule” tactics when it comes to garnering support for their austerity programme and social security cuts among low and middle earners. We should be mindful of using politically loaded terms such as “welfare”, which emphasise an individualistic rather than collectivist approach to social protection and which marginalise those in receipt of social security.

To begin with, we asked how much did the first ‘true blue’ budget of July 2015 change compared with the coalition government’s budget of March 2015? Office of Budget Responsibility figures reveal that the all-Conservative government is cutting deeper into the social security budget than the coalition government had proposed, by tightening the ‘welfare cap’ by an extra £13.1bn by 2019/20 (from £129.8bn in March to £113.5bn in July 2015). Based on an analysis of the composition of ‘capped’ and ‘upcapped’ elements of the ‘welfare’ budget, it can be argued that more than 95% of the cuts will come from benefits to the working age population as illustrated in Figure 1.

Pension related expenditure is therefore largely uncapped, even though, in light of overall benefit expenditure, the spending on pensions is more than double the expenditure on the working age population, and going up at a faster rate, as detailed in Figure 2. In other words, the rising social security bill is chiefly to do with rising pension-related costs, yet the cuts and caps are applied to the working age benefits.

The reasons behind protecting pensioners are less than clear, some potential explanations include priority given to tackling pensioner poverty and recognising pensioners’ contribution – but both these could be countered with similar calls for prioritising in-work poverty or the contribution of unpaid carers, for example. It could be that pensioners are compensated for loss of earnings because of the low interest rates, or that their lobby has been particularly successful relative to other lobby groups, e.g. disabled people, or that there is a significant element of path dependency, i.e. following the footsteps of previous policy decisions. Pensioners’ propensity to vote helps to explain why all major political parties have committed to the ‘triple lock’ of raising pensions in line with earnings, inflation or 2.5 per cent per annum, whichever is highest. As long as the governing party is signed up to the austerity agenda as well as the triple lock protection of pensions, it is difficult to imagine a different kind of distribution in the burden of social security cuts.

Secondly, we examined housing policies in relation to blue collar Conservative trope. The “housing crisis” is a perennial media headline as successive UK governments of all persuasions fail to deliver adequate new build. At election times, all major parties come out with policies and sweeteners for groups such as first time buyers, such as the Conservative “Help to Buy” policy, but these measures are too often designed to prop up faltering demand for mortgages, rather than boost supply. The Conservative’s vowed “passion for homeownership”, pledged in the 2015 Manifesto, is a misleading strapline. Their current approach to housing and social security is overseeing a steady rise in private renting, both as a share of the overall tenure mix, and as a share of Housing Benefit (HB) clients relative to social renting, the latter trend depicted in Figure 3. 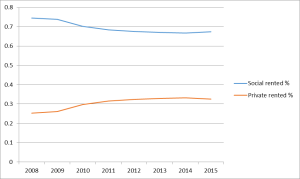 Apparently wooing blue collar votes, the Conservatives extended the Right to Buy (RTB) to Housing Association tenants in May 2015. The RTB replacement rates are pitiful despite promises to the contrary, so the social rented sector continues to decline. These trends could trigger a change in the Housing Associations’ business model: the benefit cap (that is, the maximum that each household can receive in state benefits, £23k pa in London and £20k pa elsewhere in the country) and other cuts will tempt many social landlords to abandon their social purpose in favour of market rents and commercialisation. An increasing share of HB clients in the private rented sector represents a ‘vicious cycle’ of rising costs subsidised through benefits: most private rents are higher than social rents (see Figure 4), therefore the HB bill will rise, cue calls for further austerity. An increasing share of HB clients in the private rented sector also symbolises growing state subsidies towards buy-to-let mortgages. 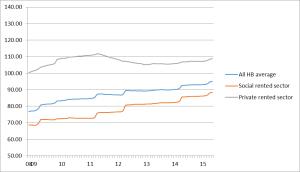 The rationale behind the extension of RTB and the prevalence of private renting among low- and middle income households could be explained through the prism of financialisation of the UK economy; for the ordinary household this means increasing reliance on private financial services (usually debt) to facilitate access to everyday services, such as housing, health or education. Further, the UK’s economic model relies excessively on house price inflation and private debt – by 2007 the value of housing and real estate was “nearly 90% of the market value of all tangible assets in the economy”(Edwards 2015: 11). Thus an increasing share of ‘working people’ has been funnelled into servicing private mortgage debt through either direct mortgage payments or rent, and this generally benefits the existing asset-owning class. Edwards has concluded that: “Our housing system acts as a means of converting income (of renters and new owner-occupiers) into wealth of established owner-occupiers and other property owners and investors and thus reinforcing wealth inequalities and income inequalities too” (2015: 10). The direction of travel in housing and social security policies is set to further increase the distance between the “haves” and “have-nots”, and despite the Tories’ political messaging, the winners in this scenario are rarely found in the blue collar professions.

To conclude our reflections on blue collar Conservatism, we reflect on the role of language in policy making and the media, and the use of the term ‘welfare’ in particular. There is growing recognition of the importance of how political and policy debates are ‘framed’. The term ‘welfare’ was imported from the US where it refers to a residual form of means-tested assistance for people of working age. Its import also carried the negative connotations of ‘welfare dependency’, a label now applied by Conservative ministers to anyone of working-age in receipt of state support, the term ‘welfare’ thus serves a triple purpose. It serves to marginalise benefits as for ‘them’ not ‘us’ whereas the term social security expresses a desire to achieve economic security for all through social, collective, means. And it serves to demonise and stigmatise the social security system and those who rely on it. At the same time, it divides ‘hard-working families’ (now more frequently referred to as ‘hard-working tax-payers’) – the so-called ‘strivers’ – off from welfare dependent ‘skivers’ in the name of ‘fairness’ (it is not clear how this language will adjust to the growing number of lower paid workers who are no longer income tax-payers with the steady increase in the tax threshold). What is clear, though, is that the government is happy to discredit financial support for those in paid work as well as those out of it – hence the hike in the minimum wage and massive cuts in tax credits. Fairness is narrowed down to the relationship between in-work and out-of-work incomes. Although ‘security’ looms large in ministers’ lexicon, the welfare state’s key instrument for providing economic security – the social security system – is being steadily discredited and eroded in a society where increasingly you are ‘On Your Own’ (see Orton, 2015).

Jenni Cauvain is Research Fellow at the Laboratory of Urban Complexity and Sustainability at Nottingham University. Her research focuses on social sustainability, housing and urban policy. Baroness Ruth Lister is Emeritus Professor of Social Policy at Loughborough University, and Labour Peer in the House of Lords since February 2011. Her career spans across academic, government and voluntary sectors, and she has published widely on poverty, social security and citizenship.

Bruce Stafford is Professor of Public Policy and Head of School at the School of Sociology and Social Policy at Nottingham University. His research centres on policy evaluation and social security, including disability issues, employment programmes and the delivery of benefits.