There are just under two million single parents caring for around 3 million children in the UK today. This means that roughly 25 per cent of families with dependent children are headed by a single parent (over 90 per cent of whom are lone mothers). The overall proportion of single parent families has been stable for the past two decades or so and single parenthood has become much more socially accepted in the UK, even if governments of different persuasions still tend to frame marriage as the preferred way to raise children (though around half of single parents had their children in marriage). Instead, the bigger focus for policy makers in recent decades has not been the status of single parenthood per se but, rather, perceived problems with the levels of employment and (especially child) poverty amongst single parent households.

Despite this backdrop of increasing single parent employment rates, the Labour government decided in 2008 to introduce the controversial policy of Lone Parent Obligations (LPOs) for a mixture of paternalistic, economic and electoral reasons. Until 2008, single parents were eligible to claim Income Support until their youngest child reached the age of 16 and whilst they were required to attend Work Focused Interviews at Jobcentres, they were not required to attend regular Jobcentre meetings oriented around an expectation to actively seek and accept paid work as is the case with the mainstream unemployed in the UK. Under LPOs, single parents’ care responsibilities were essentially relegated and single parents were redefined in policy terms as ‘citizen-workers’ rather than ‘citizen-carers’. The practical implication of this change has been the gradual transfer between 2008 and 2012 of most out-of-work single parents with a youngest child aged 5 or older from Income Support to Jobseeker’s Allowance (the UK’s main out of work benefit for the unemployed) for which continued eligibility requires them to attend regular Jobcentre meetings, actively seek work and move into paid work wherever possible.

Despite the initial controversy and criticism, such as the lack of affordable childcare and concerns regarding employment retention, of the reform, the subsequent roll-out has attracted relatively little political attention and has been rapidly implemented, rapidly accepted across the political parties, and rapidly learned to be tolerated (though not without critique) by key lobby groups and single parents themselves. To some extent, the LPOs bring the UK’s policy framework around single parenthood closer into line with other advanced economies and also, to some extent matches the wishes of the vast majority of single parent, nine out of ten lone parents not in work state that they would like to move into employment at some point. But whilst this particular policy may have converged, the UK context in which it operates continues to stand out from most other countries in terms of key economic and policy factors, most notably a lack of jobs, a chronic lack of care-compatible jobs, low wages, and expensive childcare. This context hinders the pro-employment and anti-poverty aspirations of single parents and policy-makers alike and leaves the LPOs open to serious critique in terms of their effectiveness, their necessity, their limits and their equity for single parents today.

Since the LPOs were introduced in 2008 the single parent employment rate has increased from 58 per cent then to around 60 per cent in 2013 – not to be sniffed at during an economic downturn but hardly comparable to the 13 percentage point increase between 1997 and 2008 before the LPOs were introduced. In terms of strategies to support single parent employment it is clear that other factors – job availability, childcare costs, health issues – look far more relevant than the LPOs. A key problem for single parents in recent years however has been the worsening in this critical background context at precisely the same time as the LPOs have rolled out.

Since the financial crisis of 2008, the ensuing recessions and sluggish economic performance have intensified pre-existing problems in the UK economy that have always hindered single parents’ aspirations to seek work and escape poverty. In particular, single parents continue to struggle to find jobs that are compatible with care responsibilities, that are secure or that offer decent wages. This is,  in significant part, because the types of jobs in the UK economy that have ‘care friendly’ hours tend to be concentrated in low paid sectors such as retail, catering, services and childcare and, in part, because childcare costs remain amongst the highest in Europe. Hence, although paid work represents the central poverty-alleviation instrument of all political parties, 30 per cent of single parents working part-time and 20 per cent of those working full-time remain poor. Once in work UK single parents continue to face among the highest childcare costs in the OECD even after childcare subsidies for the lowest paid in particular. Figure 1 shows how only Swiss parents face higher childcare costs than the UK, with mean childcare costs consuming just over a quarter of net family income in the UK assuming a couple household where both parents work full-time on average wages. 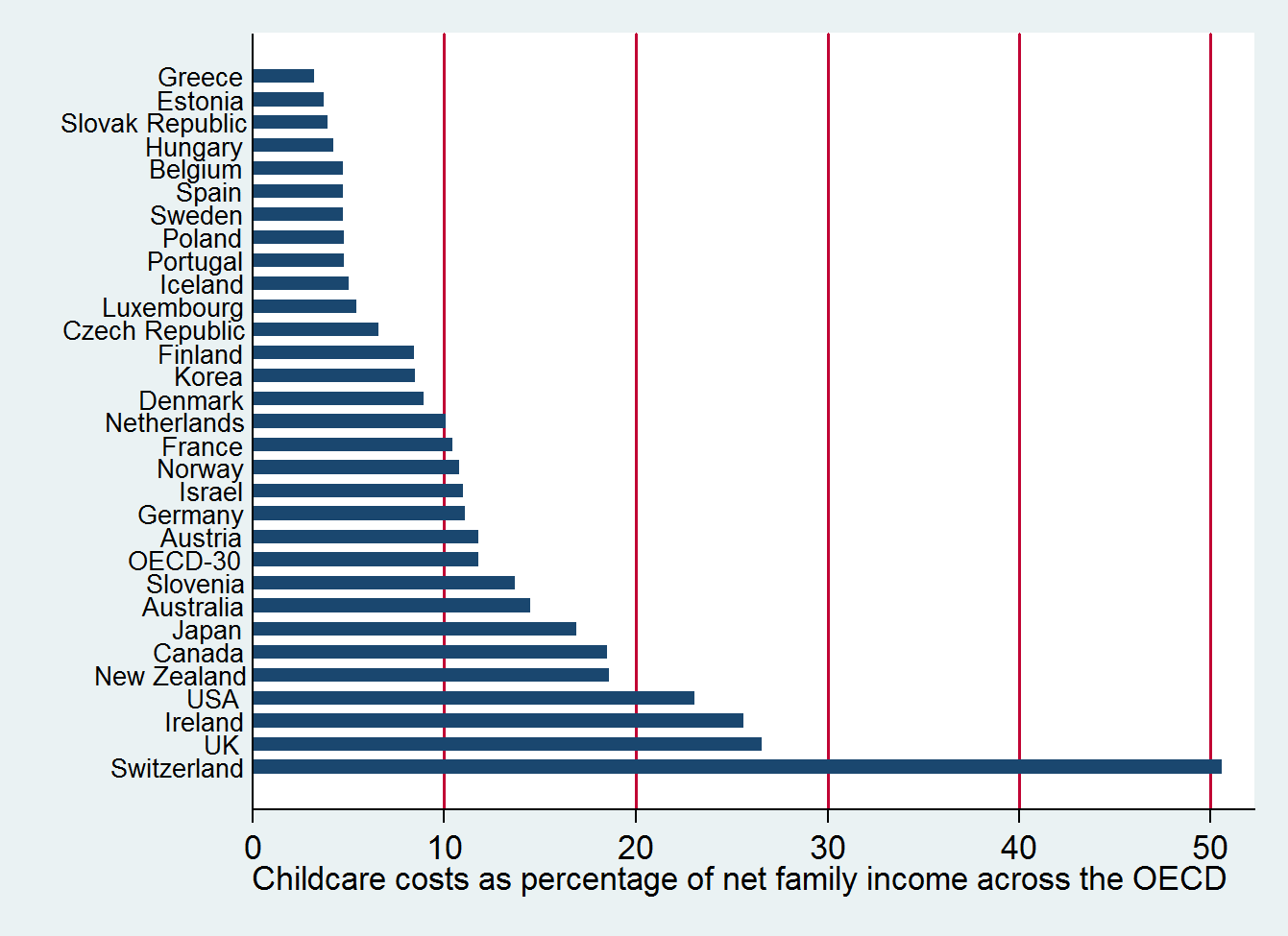 As well as high childcare and housing costs, UK parents also face ongoing problems of childcare quality and childcare availability, particularly for those seeking flexible childcare arrangements (e.g. to respond to changing employment hours from week to week) and those needing childcare for older children. As a consequence, even when succeeding to move off benefits and into work many single parents struggle to escape poverty and to retain those jobs, entering the expanding ranks of the working poor or those trapped in low pay-no pay cycles between poor quality jobs and unemployment benefits.

Not that single parents are alone amongst these groups of course: one is six working adults are poor in the UK today, around half of poor workers are doing 40 or more hours of paid work per week, and around 70 per cent of starts on Jobseeker’s Allowance are repeat starts from those who have left the benefit previously but fallen back onto it (see also here). But single parents are disproportionately vulnerable to these trends and overall remain at twice the risk of poverty than couple families (43 per cent for single parents compared with 22 per cent for couple families).

Requiring lone parents with school-aged children to combine caring for their children with being in paid employment is clearly here to stay. Yet, we would argue that the current policy package for single parents built around the LPOs is both misguided and incomplete. Most single parents are certainly more engaged with the labour market as a result of the LPOs. But it is less clear that the LPOs have helped single parents. At an aggregate level, the LPOs do not seem key to explaining increases in single parent employment rates since the late 1990s, increases with took place largely prior to their introduction in 2008. At an individual level, the vast majority of single parents want to work and need support rather than compulsion to make this happen. Jobcentres are struggling to cope with the increased volume of claimants, specialist single parent employment advisers are thin on the ground, sanctions create financial and emotional hardship for single parent families but are variably understood and enforced, and single parents farther from the labour market continually cite inadequate employment support.

Once in paid work the LPOs have offered nothing to help single parents to overcome the enduring challenges of escaping poverty and sustaining their employment. Indeed, it is more likely that the LPOs may have harmed single parents in a way the package of policy  measures of the previous government would have largely avoided. Firstly, since the LPOs have compelled single parents into the labour market, the rate of single parent unemployment has also inevitably risen as not all of those formerly ‘inactive’ single parents have managed to find paid work. This is a concern for many reasons but not least due to evidence that choice matters to well-being such that the voluntarily inactive on average show higher levels of well-being than the involuntarily unemployed, even if both groups remain outside of paid work. Secondly, whilst the LPOs are premised on the assumption that motivation is the key driver for single parent unemployment, research refutes this idea and instead highlights the centrality of barriers such as a lack of jobs compatible with care needs and/or with inadequate pay or hours, childcare costs and availability, and health issues as main drivers of single parent (un)employment patterns.

Figure 2 shows this visually in a simple cartogram of English local authorities using 2011 data in which local authorities are sized according to the size of their single parent population and shaded according to their percentage of single parents receiving Jobseeker’s Allowance. London, for example, has a relatively large lone parent population (large areas) combined with relatively high rates of lone parents receiving Jobseeker’s Allowance (dark shading). What is interesting about Figure 2 is that it shows systematic spatial patterning of lone parent JSA rates across local authorities in a way that makes sense in terms of context (e.g. high childcare and housing costs plus intensive competition for jobs in London) but not motivation. Yet LPOs ignore this evidence and instead force single parents through these barriers alone and against their wishes rather than supporting single parents over them and with their consent. There are clear risks that the well-being of single parents and their children will be harmed in doing so.

Figure 2: Context not conduct as the key to single parent (un)employment in England 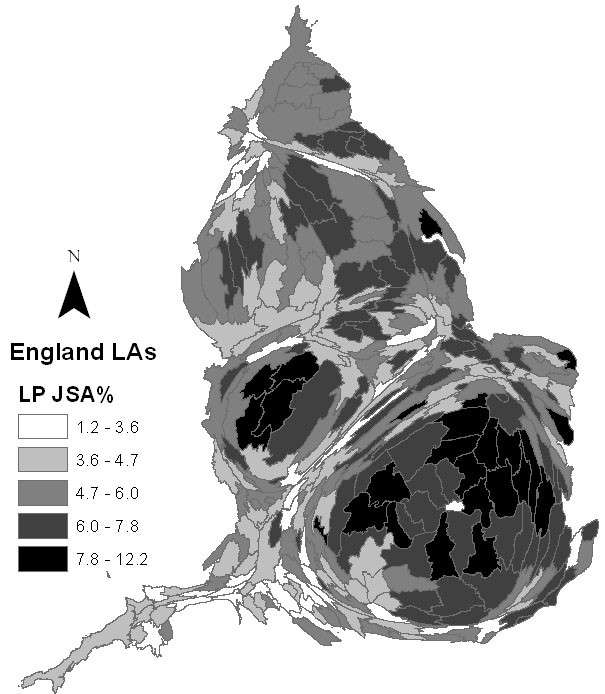 More broadly, however, all the policy activity and controversy around the LPOs risks distracting attention from more relevant issues around the nature of the UK labour market, the quantity, quality and flexibility of jobs available, the nature of activation policies, and the cost and availability of childcare. The LPOs represent policy making done back-to-front: rather than tackle these issues and thus remove the need for the LPOs, policy makers have instead relied on LPOs rather than tackling these more fundamental problems. Whilst the inevitable failure to transform single parent employment and poverty rates may be frustrating for policy makers, the chief losers in this reversal of evidence are single parents and their families whose aspirations around employment, income and well-being continue to be compromised.

Tina Haux is a lecturer in Social Policy at the University of Kent. Her research to date has focused on lone parenthood and welfare to work as well as parenting and child contact post separation. Adam Whitworth is a lecturer in Human Geography at the University of Sheffield. His research focuses on the spatial analysis of social policies relating to employment activation, work and well-being, and single parents.