The selection of images in this article is from a Heritage Lottery funded project, Let The Elders Speak, a life stories project based within the Beenstock Home, an Orthodox Jewish Care Home in Salford. The project explores oral histories through interviews, art workshops, photography and food. Many of the participants of the project are Holocaust survivors, most are immigrants some with more than 60 years residence in Britain, and a large proportion of those who wished to take part are women.

My involvement in the project began in 2009 on a spring afternoon when I was walking through some streets in Salford. Rows of traditional terraced houses that had stood empty were being bulldozed to make way for new developments. As I walked through the streets taking photographs, I heard the sound of music and I walked towards it. As I turned a corner the environment changed completely. This street was fully occupied, the residents were in and out of each other’s houses, the cars and backyards decorated and the children dressed up as kings and queens. I approached a man, and asked ‘What is happening here today?’ He turned and briefly replied, ‘A Jewish festival’ and turned his back. ‘Which Jewish festival?’ I asked. ‘Purim’, he said, and turned his back again. ‘Oh’, I said, ‘technically I should know that, my mother is Jewish and that makes me Jewish, but I wasn’t raised to be religious’. At this point he turned to me and began an in depth conversation telling me all about the day and how they were celebrating. He even let me take a photo of his son.

I had recently moved to Manchester and felt very at home, my Grandpa lived there and the family would get together to celebrate Pesach and Hannukah (though we did not celebrate Purim…). For most of us it was mostly an excuse to see each other and have a nice meal.

I had also just started a job photographing historic Jewish documents and all this happening at once made me want to do something to investigate (my) Jewishness. I was interested in the notion of the Jewish matriarch, and began a project to meet and photograph Jewish women.

I was introduced to a friend of a colleague and was quickly told that if I wanted to be introduced to religious (Orthodox) Jewish women I would have to dress a little more appropriately (although at the time I had purposefully worn my longest skirt and highest cut top). So donned in a skirt that grazed my ankles, a t-shirt that did not show my collarbone and a cardigan covering my elbows I knocked on the front door of the house of Chava Rosenzweig.

Chava is an Orthodox Jewish artist her work explores the impact of the Holocaust on second and third generation survivors. She is interested in its how this affects identity, memory and how it has shaped people’s lives. She also works as an art therapist and had been working with the residents of Beenstock exploring their memories through art.

We decided to work together and applied for Heritage Lottery funding and the project began in 2011. During the Let The Elders Speak project we worked with the residents in a variety of ways; interviews which were sound-recorded and have now been deposited in the North West Sound Archive, art workshops which centred on themes such as journeys, food, family and fire. We also explored memory through food, collecting recipes from memory and cooking them up for the residents to eat.

I made photographs to accompany the collected artworks, recipes and interviews. Some of the portrait sessions took place alongside the interviews and it was the first time I had heard anyone speak first hand about Holocaust experiences. As brutal and painful as the stories were, I was surprised about how positive they were too. The stories of survival, of faith and of hope were incredibly powerful. Once in England, they had to build a life from scratch and I was touched by the stories of the remarkable lives these people had following the trauma of their Holocaust experiences.

One lady’s husband had a business making tea cosies, but she thought ‘it wasn’t that glamorous and there isn’t much money in it’ so she thought he should get in to lingerie. The business was very successful and she went on to the next thing. She wanted to start a Jewish High School, ‘but people laughed and said it would never happen’. So she went out and held coffee mornings and evenings and arranged fundraisers until they made enough money to buy a building. Another lady established a ‘wedding gemacht’, a charity that organises people to cook and donations of food for those that cannot afford to cater for their wedding.

The photographs were taken in the resident’s bedrooms or apartments. It was important that the photography sessions were flexible and catered to the individuals’ needs. This meant that the portrait was taken in the place in which that person usually sat, with little disruption to them. Because of this, the portraits are peppered with clues to the new habitat of the sitter. I’m interested in how this new environment creates a compromised visual identity for the sitter, they didn’t choose the curtains or the carpets, but often there are suggestions of the style of their previous homes. I found it very interesting to observe which items from their previous home had been selected to come with – and what is added since their arrival – shelves overflowing with family photos as a new grandchild or great grandchild was born and a photo added to the collection.

We have collated the stories, recipes and artworks into a small book which will be self-published later this year. Each resident and their family will receive a copy and the rest will be sold to raise money for the Beenstock Home. Several of the project participants have sadly passed away since we met them, but I hope their memory will be kept alive, at least in part, through the memories they have shared with us. We dedicate our work to their memory. 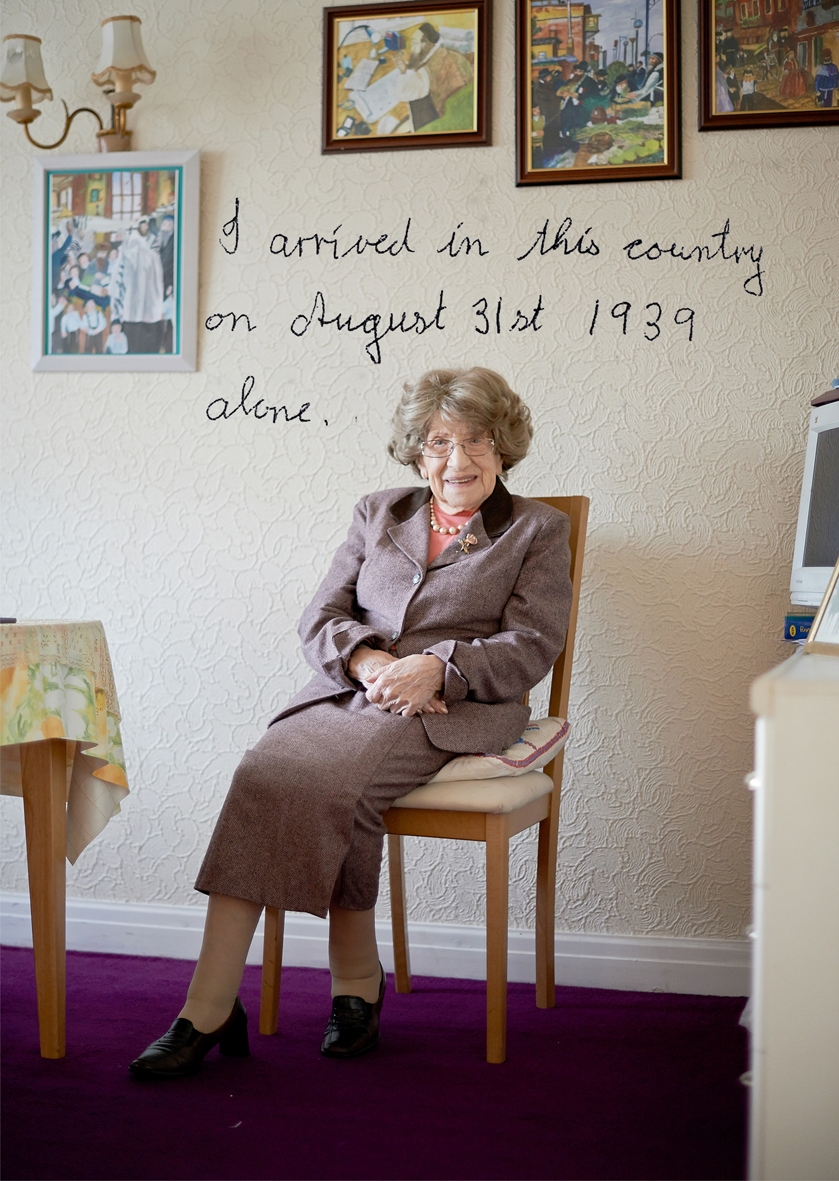 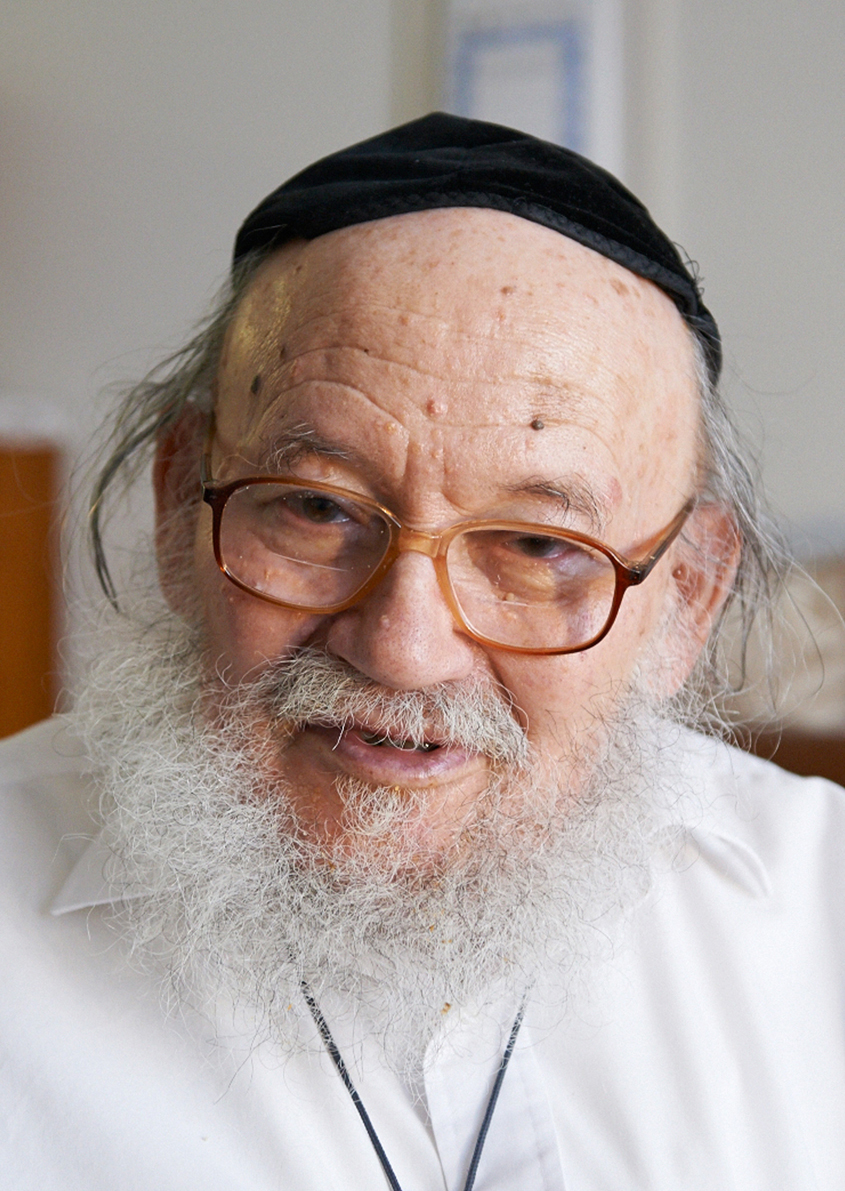 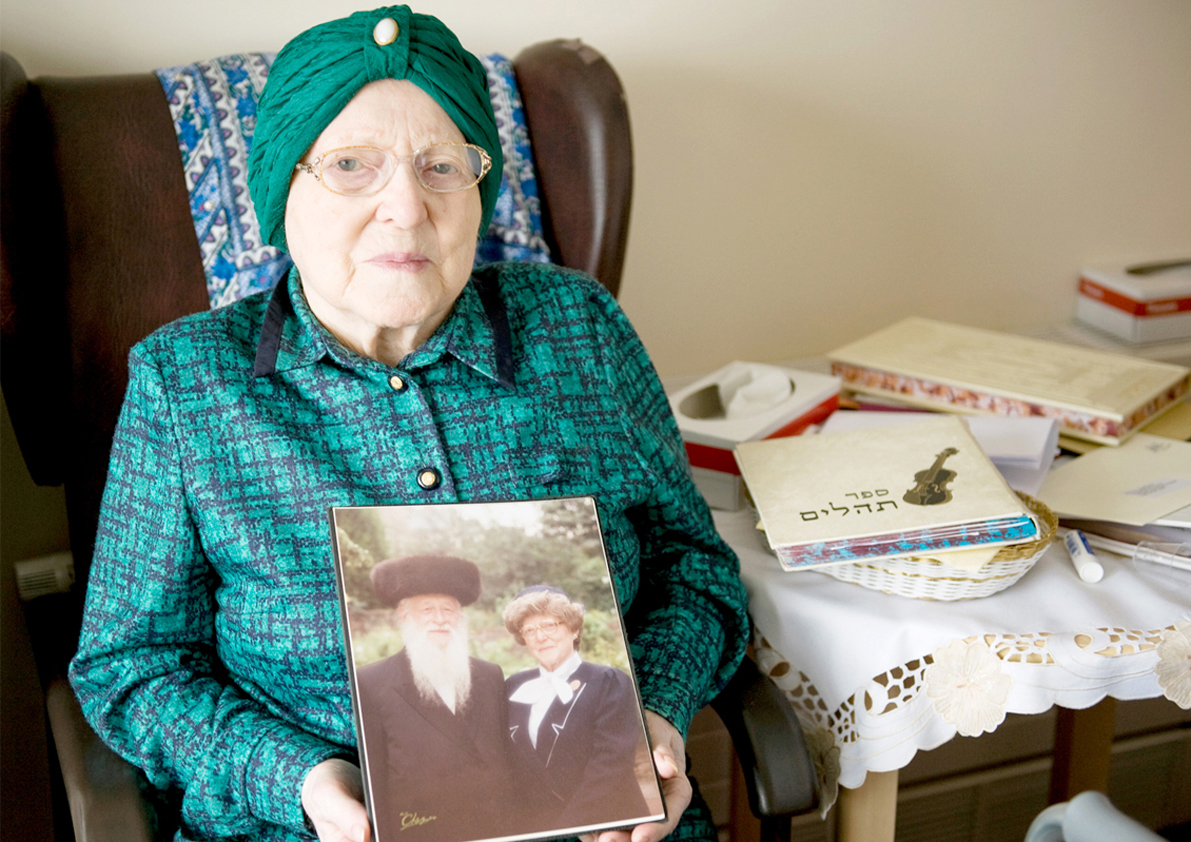 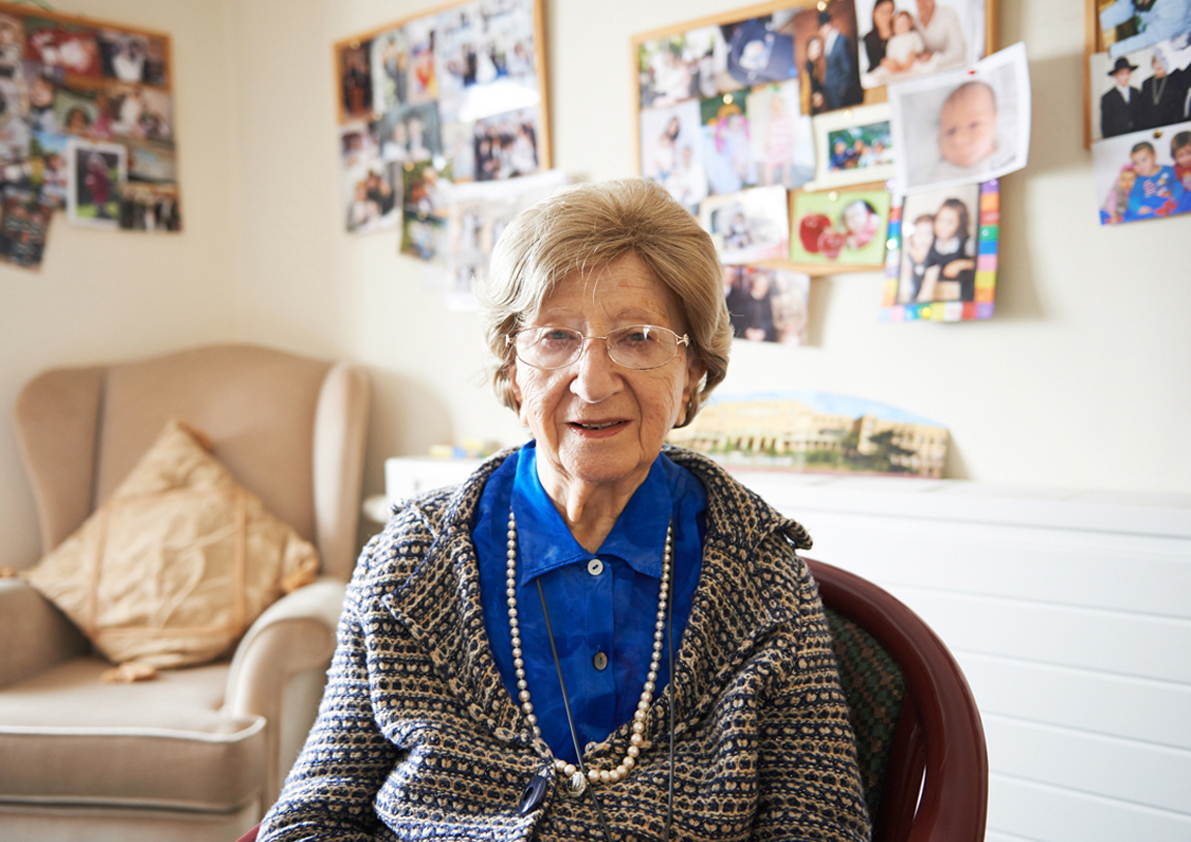 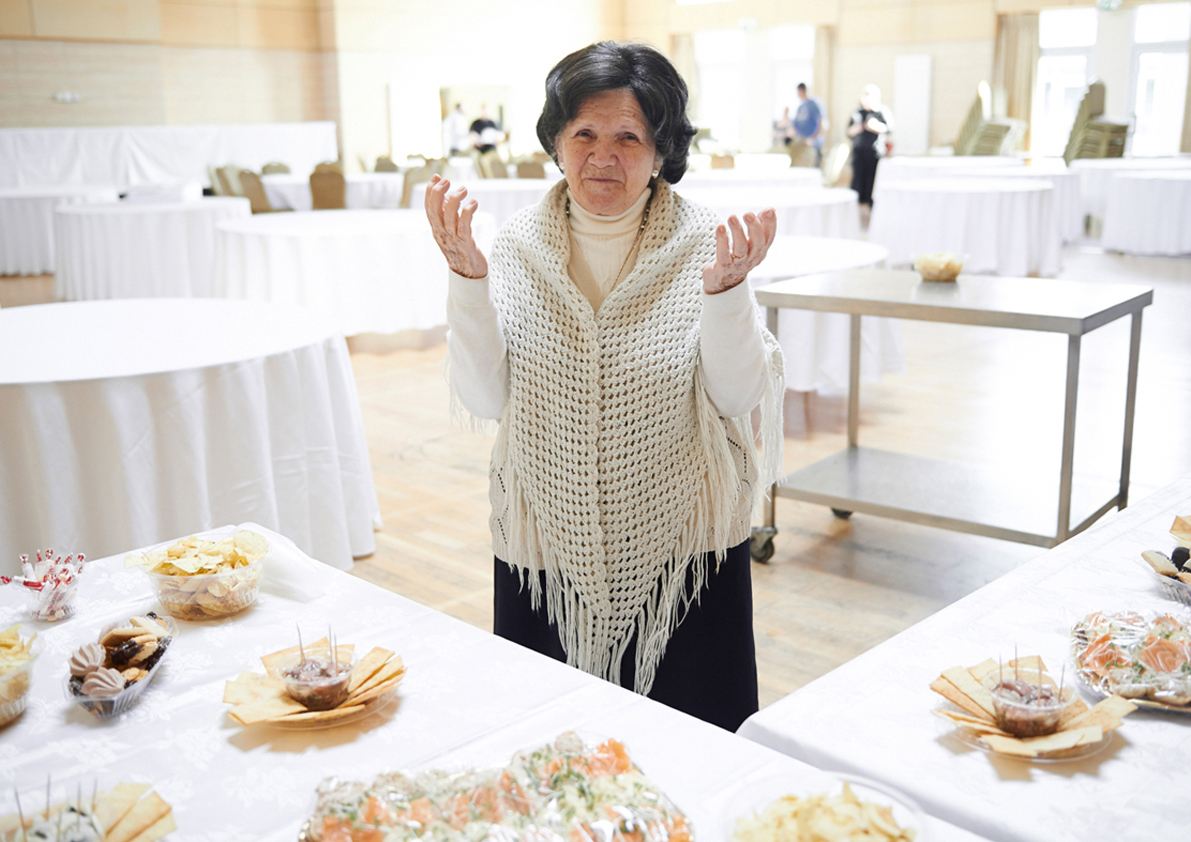 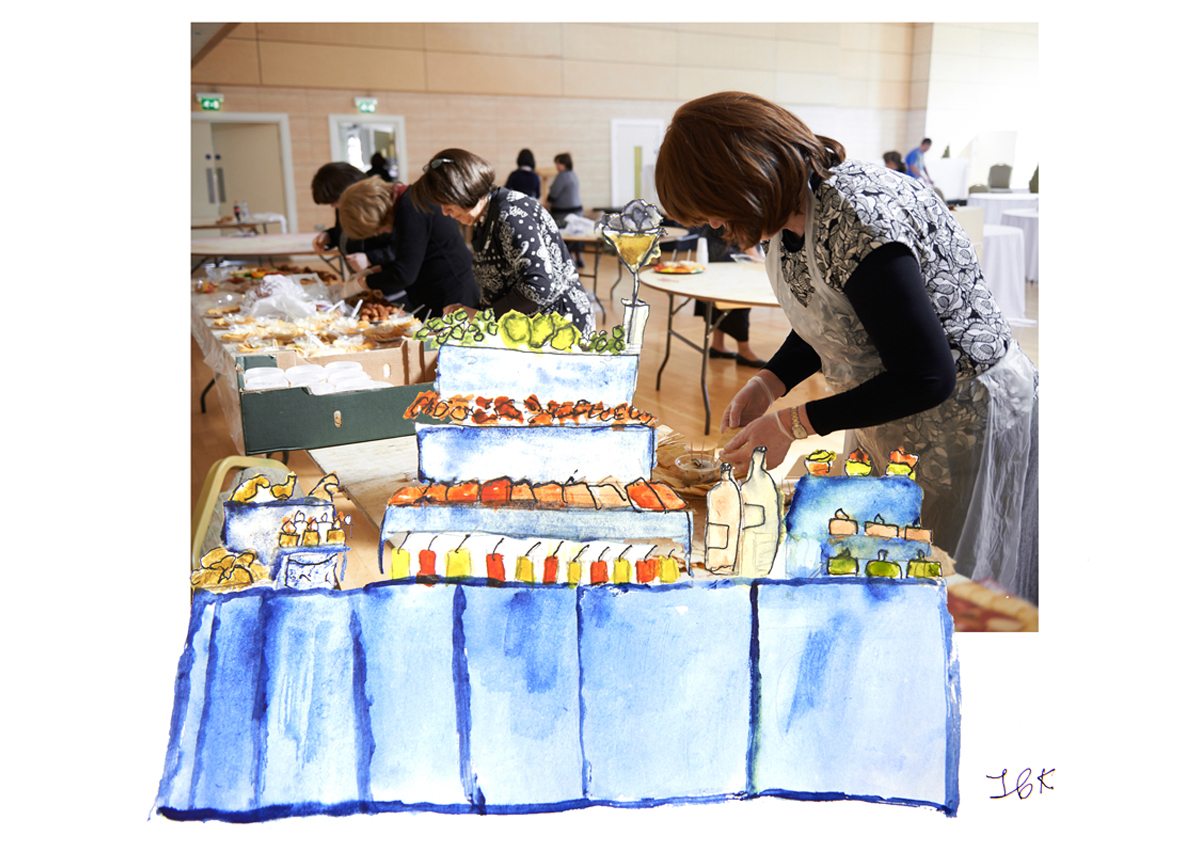 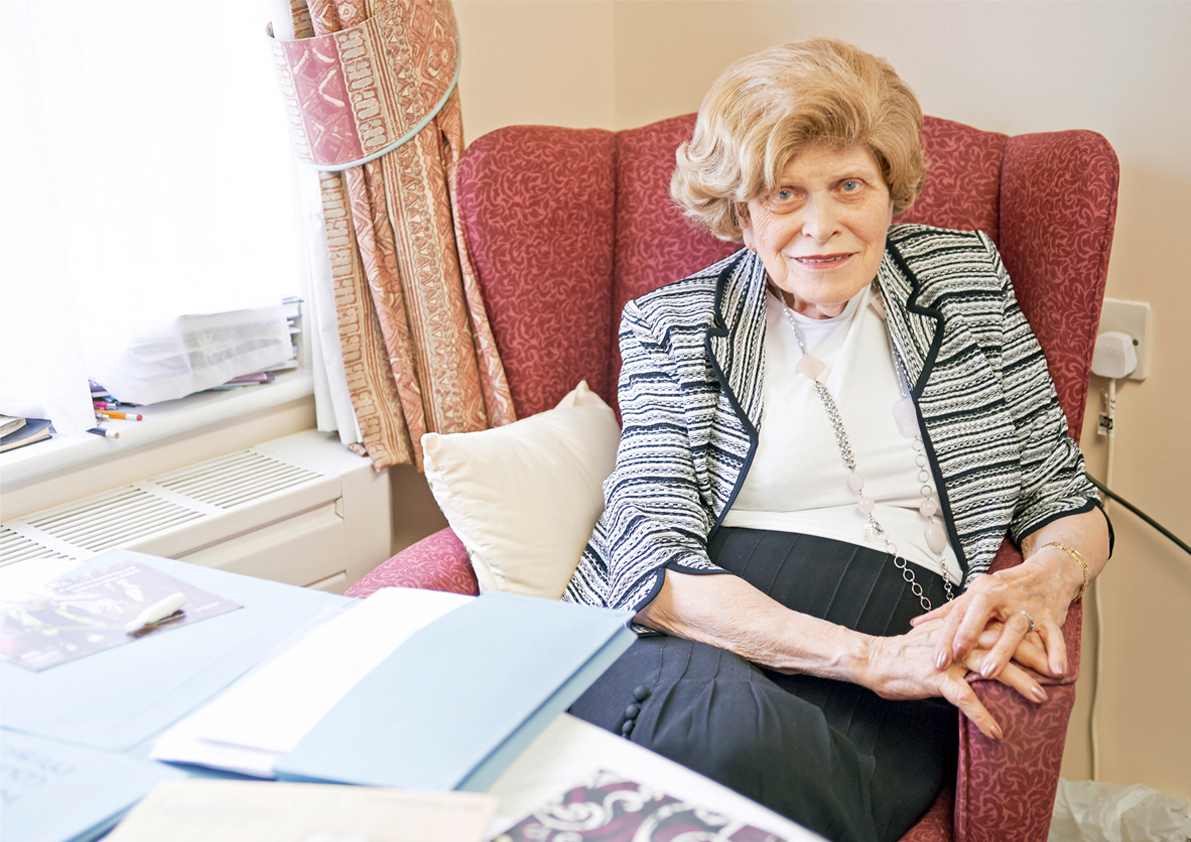 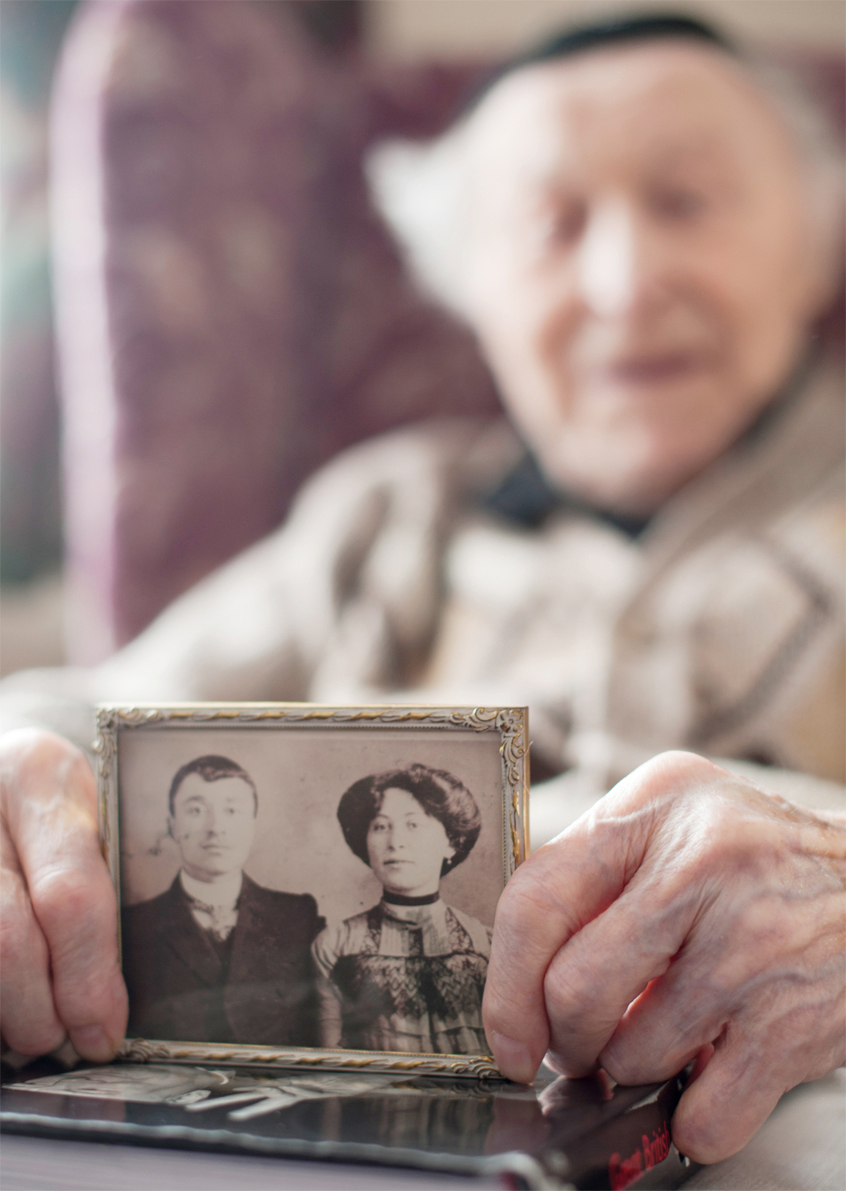 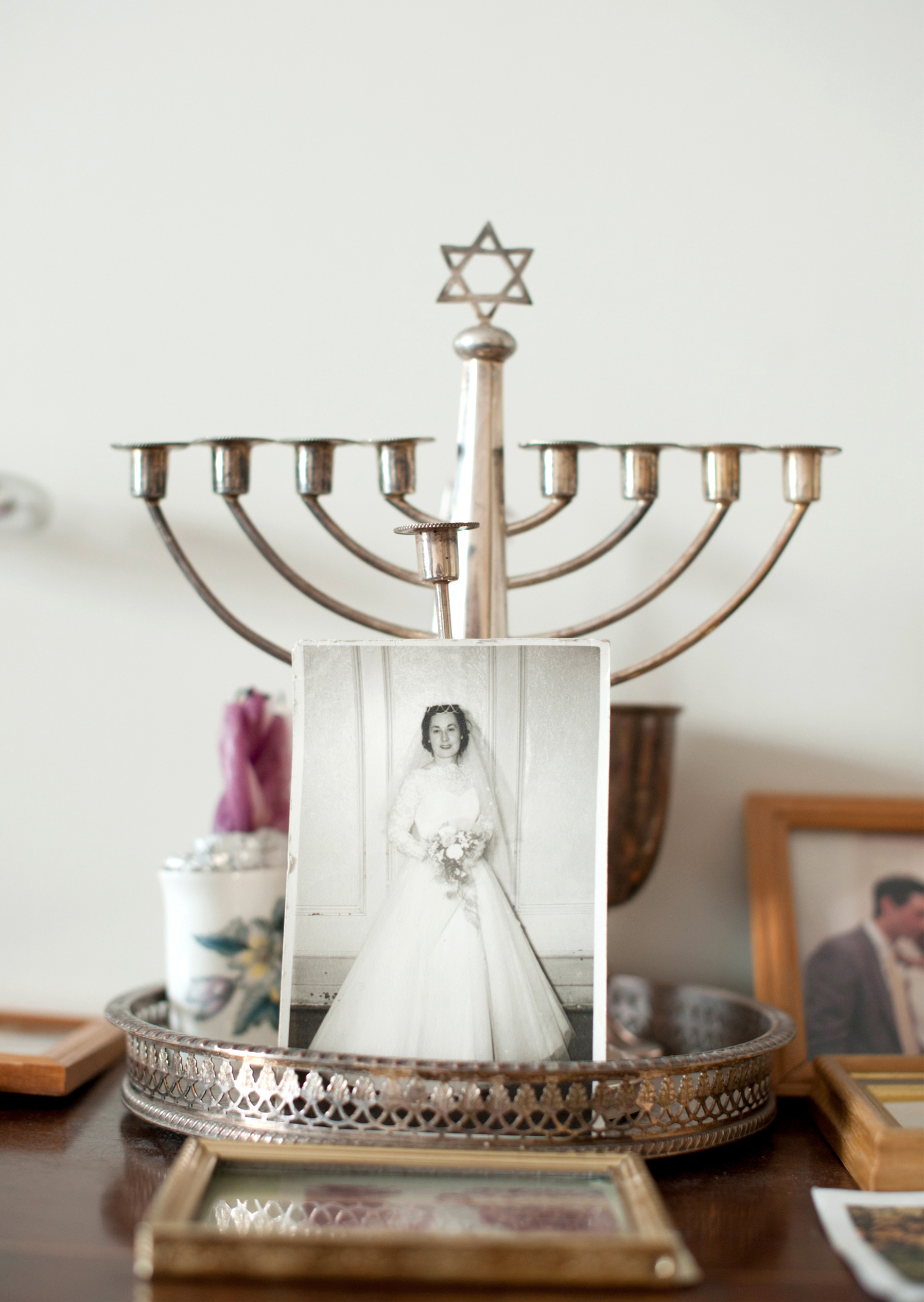 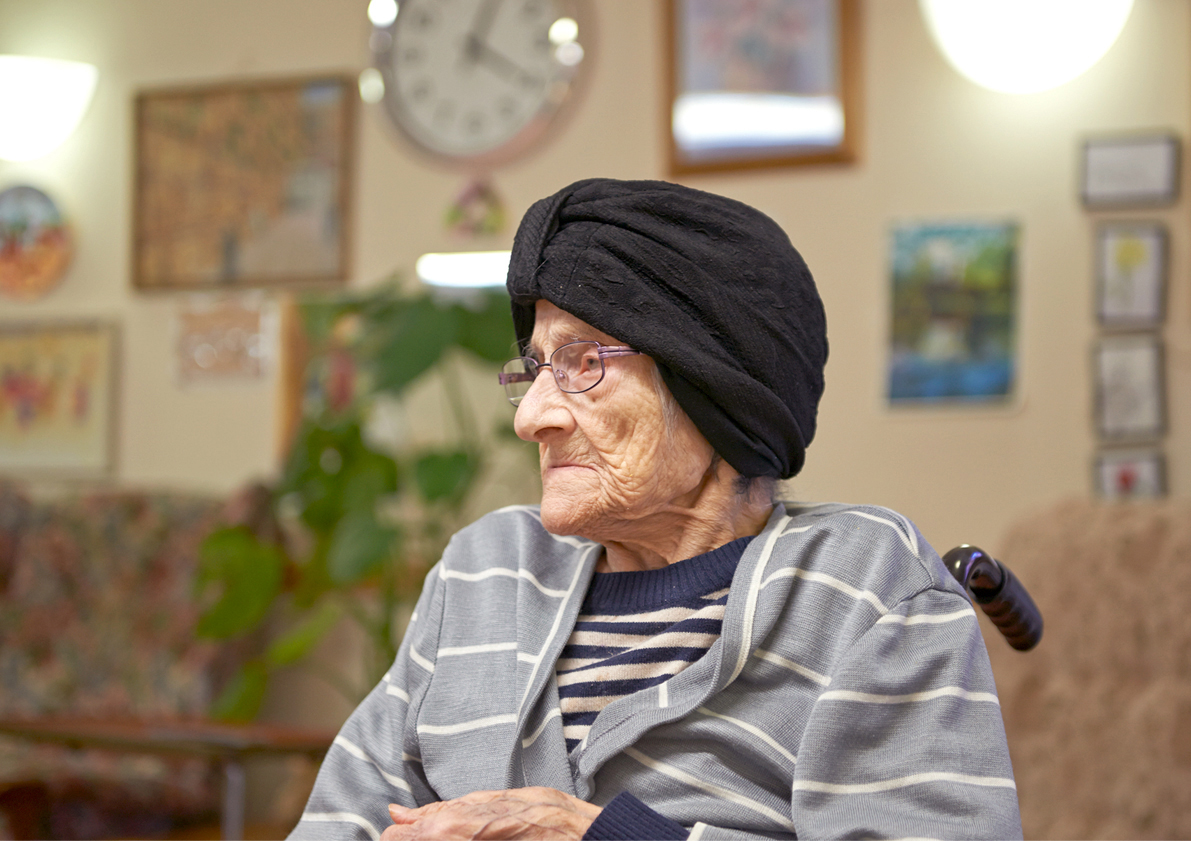 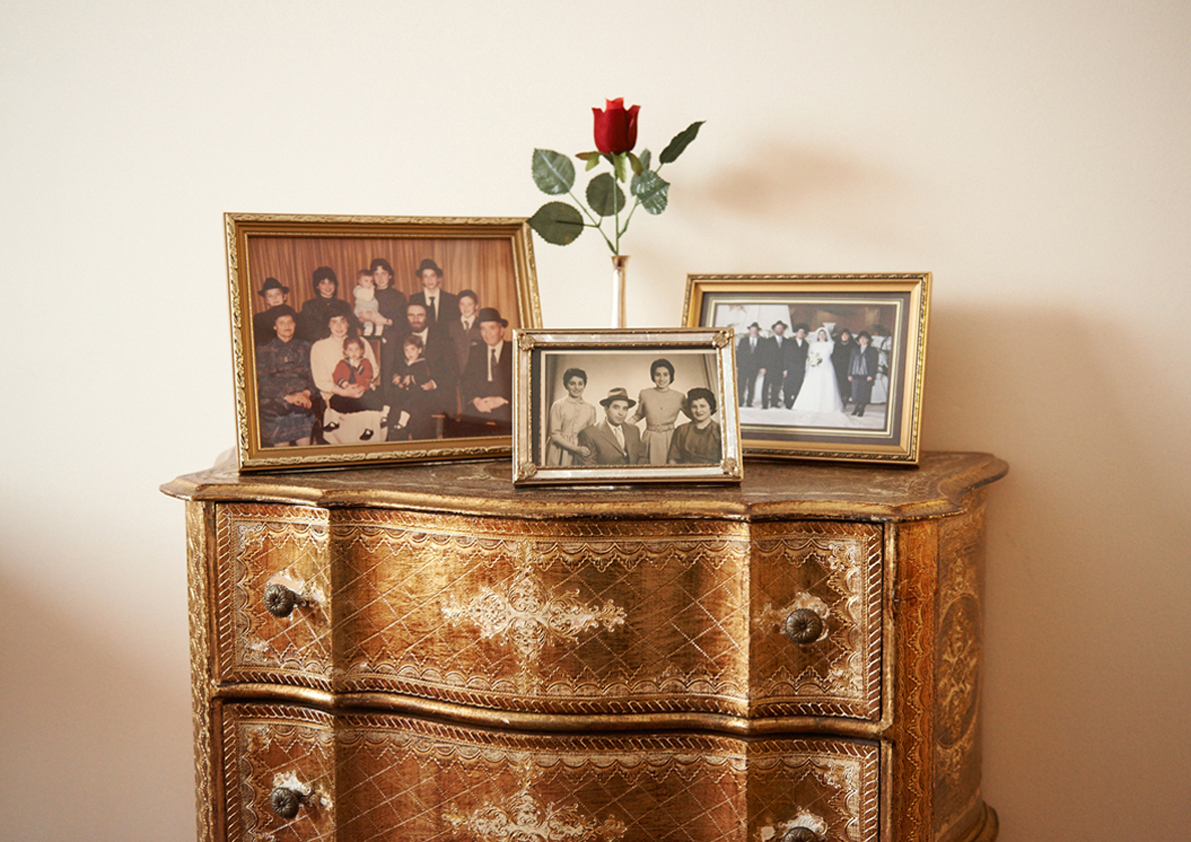 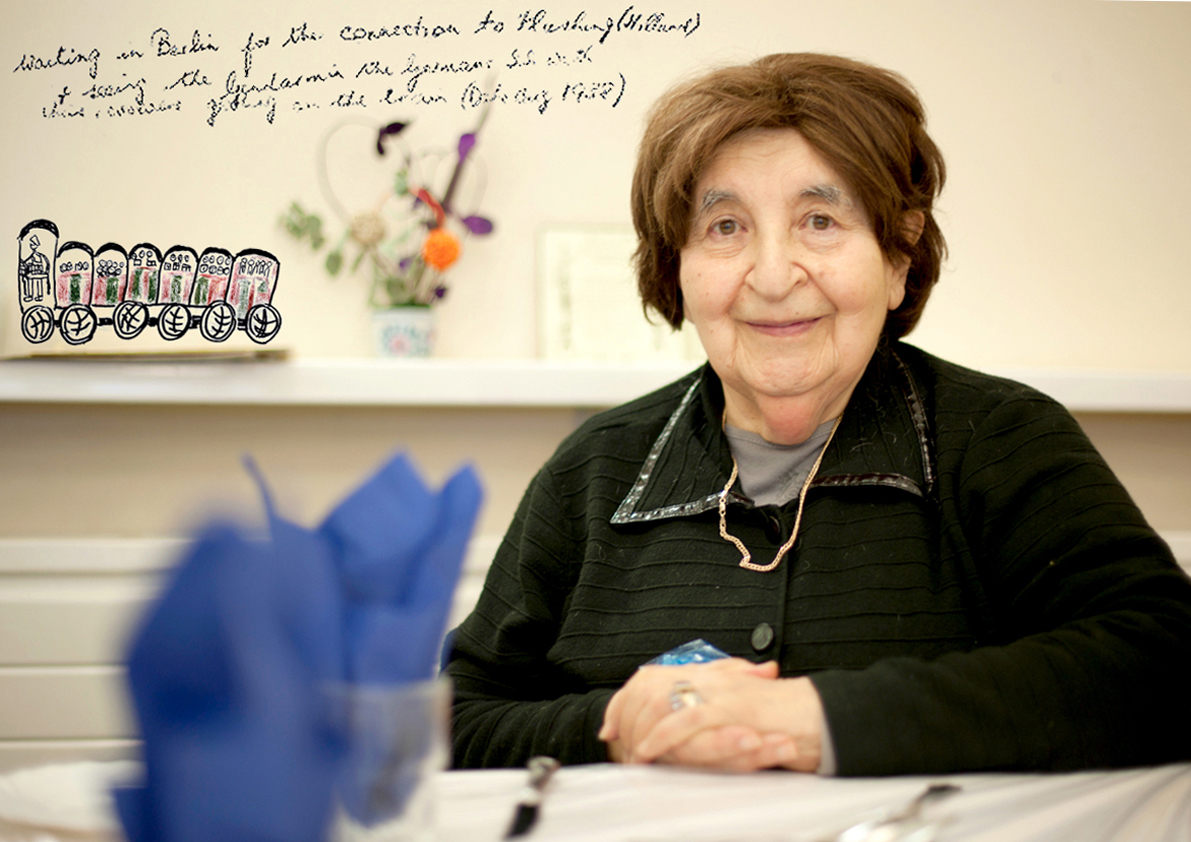 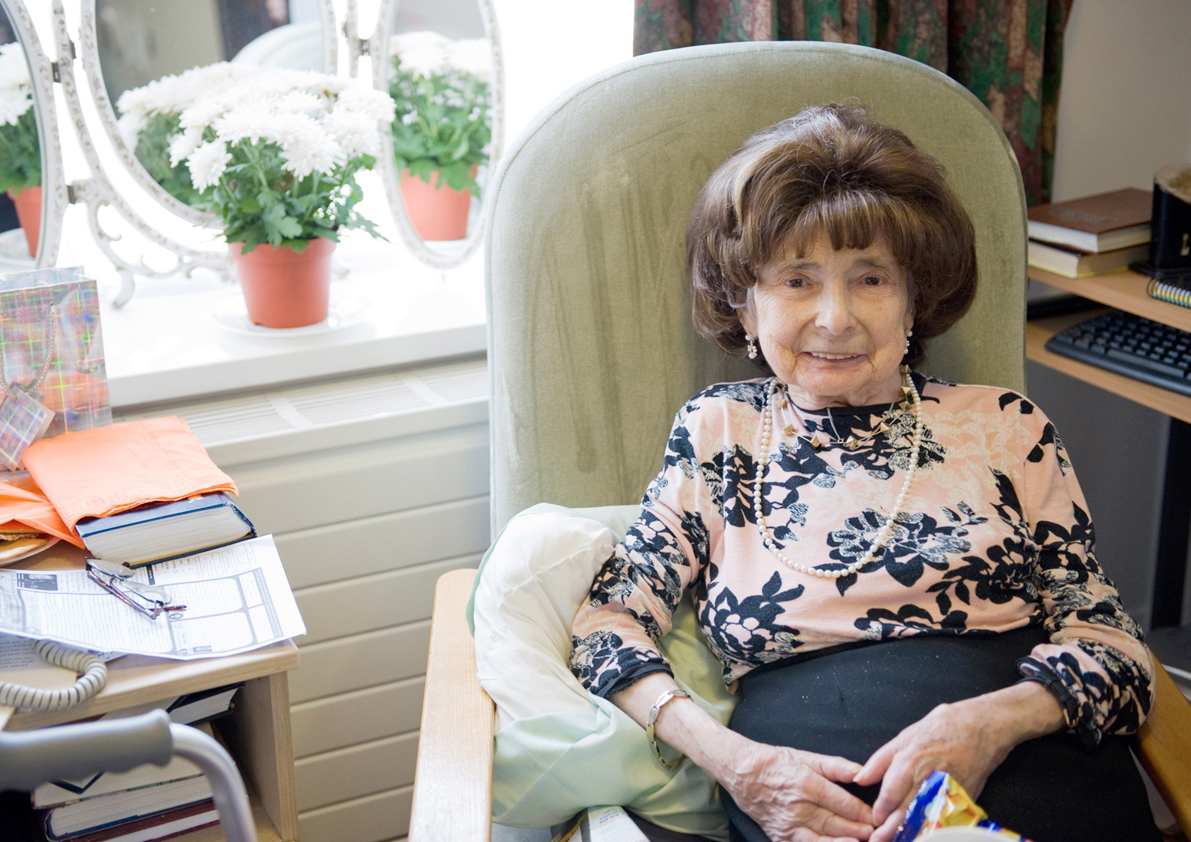 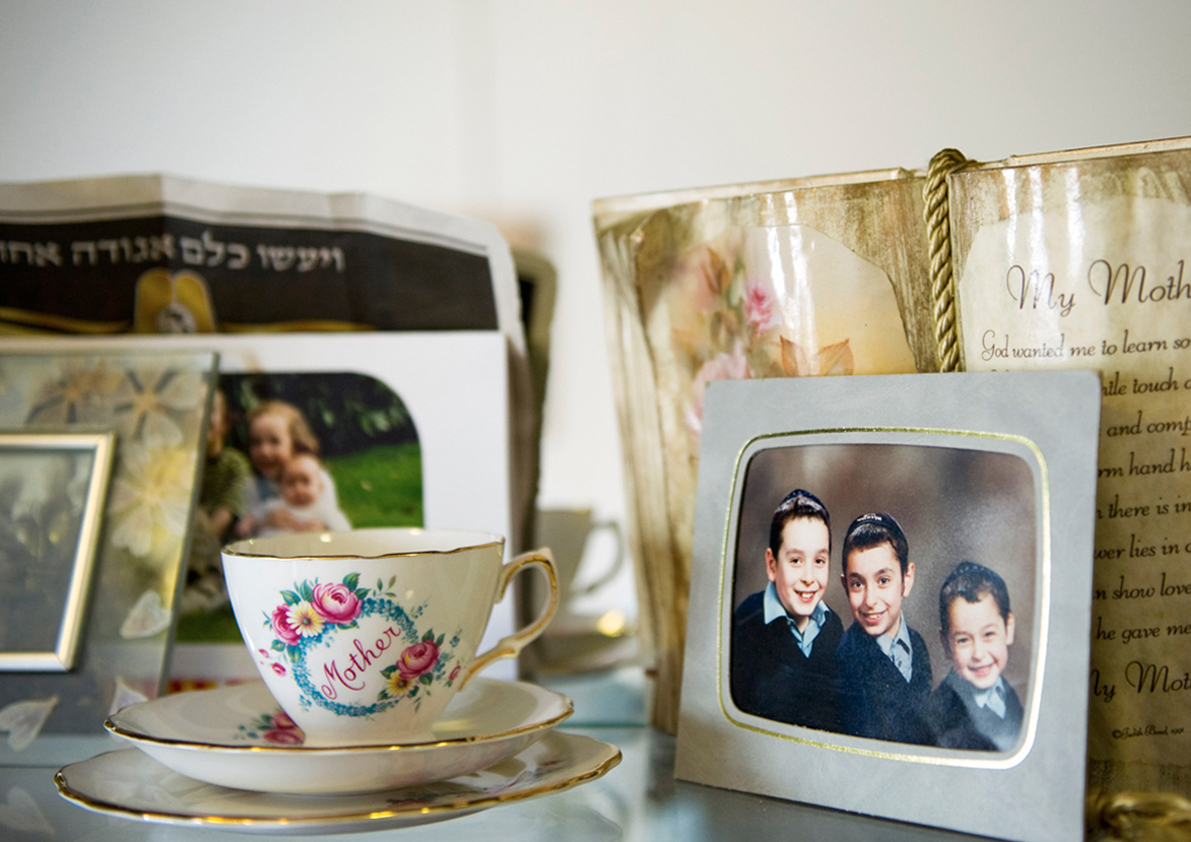 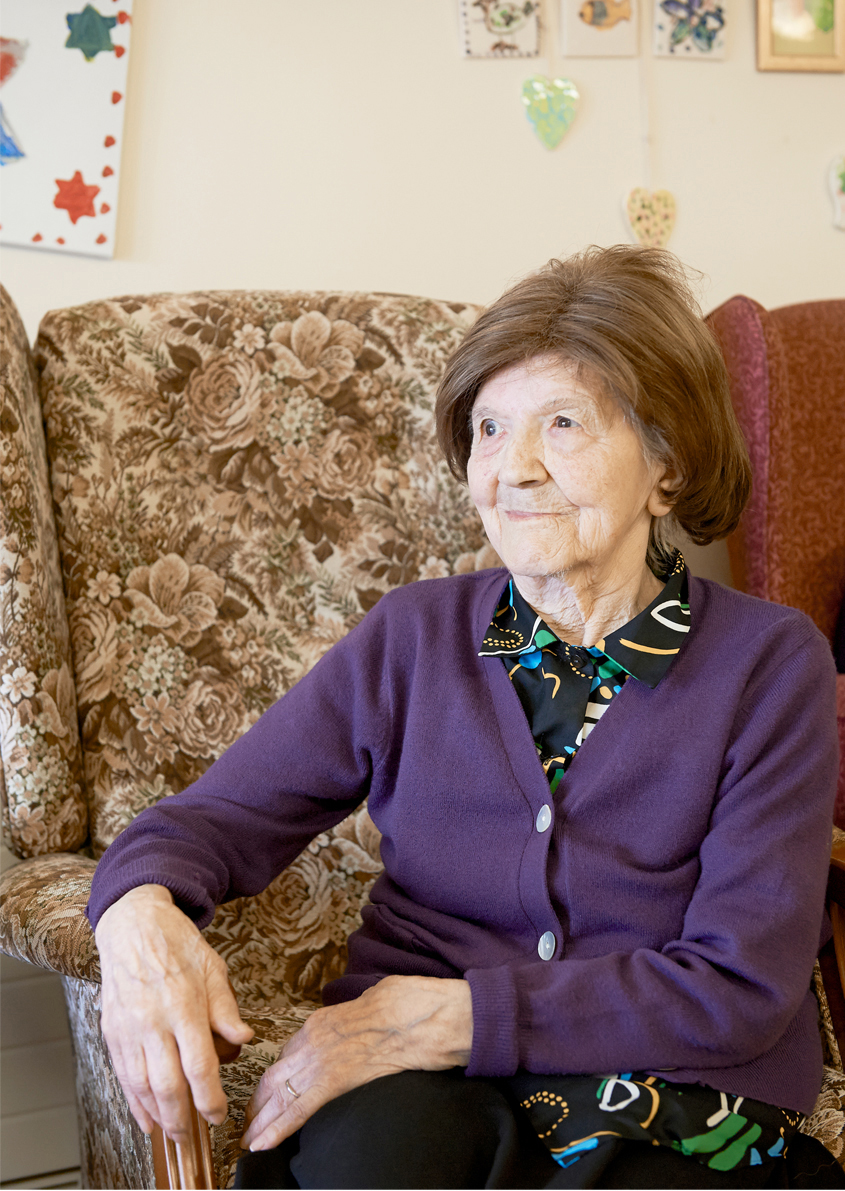 Gwen Riley Jones is a free-lance photographer. Let the Elders Speak has received follow on funding from the Six Point Foundation – a charity working for the benefit of holocaust survivors and refugees – to continue the work nationally over the next two years.