On the Frontline: Democracy at 4am – Taiwan’s Sunflower Movement

While the world has been focused on events in Ukraine, another revolution has been taking place in Taiwan, largely unnoticed. Hundreds of people, mostly students, occupied the parliament for the first time in Taiwan’s history in protest against the undemocratic passing of a controversial Trade in Service Agreement (TiSA) with China. After negotiations with the Prime Minister broke down, and an aborted attempt to extend the occupation to the Cabinet Offices ended in bloody oppression by the police, the movement gained momentum, as five hundred thousand Taiwanese joined the students on the streets, spread across 49 cities in 17 countries. The occupation of the parliament lasted for 24 days, until the students voluntarily and peacefully left on 10 April. 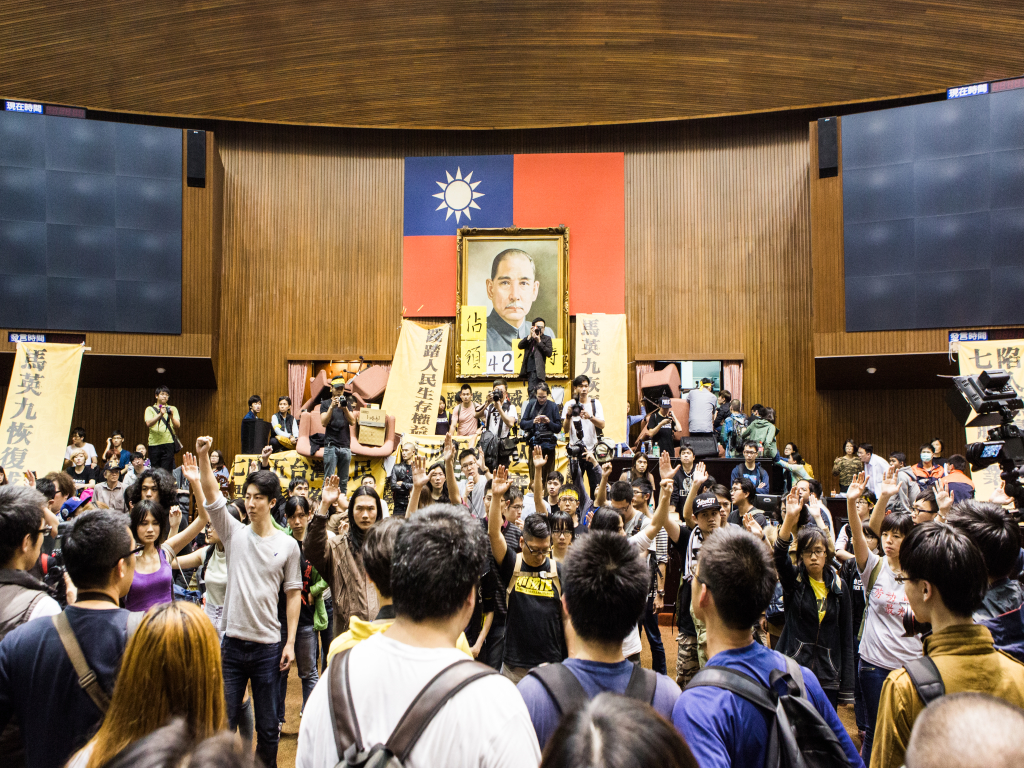 TiSA aims to lift hitherto existing restrictions on mutual investment in the service industries between the two countries. The content of the agreement is controversial, but protests were sparked by a severe breach of democratic process in the way in which the ruling party tried to push the pact through parliament. By the afternoon students had surrounded the legislature, before breaking in and occupying it at 4 am on the morning of March 18.

Commentators may easily identify several shared features between the protests in Ukraine and Taiwan. They are both small countries positioned next to a world power that claims to be their ‘mother country’, Russia for Ukraine and China for Taiwan. Their unpopular leaders, Viktor Yanukovych and Ma Ying-jeou, turned to the ‘mother countries’ to rescue them from economic crises (and, it may reasonably be assumed, to secure their own political interests).

But while the crisis in Ukraine is considered a struggle between two conflicting interest groups, Russia and the EU, Taiwan is facing China alone. The other player with interests in the conflict, the USA, has been keeping a low profile.

The absence of a rival major power has largely meant indifference in the eyes of the Western media. The Sunflower Student Movement has been understood merely to be wary with regard to China’s increasing economic and political encroachment across the straits. Yet, this conventional analysis overplays the influence of the ‘China factor’ in the demonstration and Taiwanese society as a whole, ignoring the very real desire for further democratic consolidation and the continued development of a Taiwanese anti-neoliberalism and social democracy.

The movement for democratic consolidation

The key feature of the Sunflower Student Movement has been its pursuit of democratic values, not its character as an anti-China protest. It was not TiSA itself, but rather the breach of democratic procedure, which sparked the occupation. The protesters claim that the Taiwanese government did not complete an impact evaluation before signing the agreement with Beijing in June 2013, and afterwards held only superficial public hearings. Once sent to parliament, the trade agreement was supposed to undergo a line-by-line review. But, fearing stalling tactics by the opposition party, the Democratic Progressive Party (DPP), the ruling party (Kuomintang, KMT) declared the process completed after only thirty seconds on the floor.

In fact, before the movement began, very few people in Taiwan knew what TiSA was, how it was going to affect Taiwan, and whether or not Taiwan should sign such an agreement with China. Such overwhelming ignorance meant there was no force capable of mobilizing the people to oppose directly either China or further economic integration between the two countries. It was the lack of transparency in the negotiations and signing of the agreement which troubled protesters. Some even focused their protest only against the process, and not the content of the agreement. In other words, they believed TiSA may in fact benefit Taiwan, but they could not tolerate the government passing the agreement without a proper democratic process.

The students’ demands were clear: (1) first, enact a law requiring legislative monitoring of agreements with China, and then (2) review the current version of TiSA using this new law. Focus was put exclusively on establishing a democratic (legislative) procedure, asking the government to remedy an immediate lack of any legislative procedure to monitor and to review international trade agreements signed by the authorities concerned. Indeed, these students showed no particular hostility to China (at most, they are wary of Chinese capital) and had no interest in previously discussed, and unresolved, topics like unification versus independence. A backlash against China is neither the key reason nor the major appeal of the Sunflower Student Movement. If anything, it is rather a by-product.

The second value that has been prominent in the movement is anti-neoliberalism. Like many other countries, neoliberalism, by which I refer to the ideology that believes the nation state is obligated to guarantee or promote the free market and to welcome global capital flow, has been a prevailing belief in Taiwanese society. Policies like waiving trade tariffs, lifting commercial restrictions, privatizing state owned enterprises, minimizing state financial regulation etc., have been widely implemented since 1990, even during the DPP’s administration between 2000 and 2008. People in Taiwan have been dissatisfied with the extent and with the speed of the DPP’s neoliberal efforts. This was one of the key reasons the KMT won two presidential elections in 2008 and 2012, when the party promised to strengthen Taiwan’s economic development by further integrating and cooperating with China.

Yet the KMT’s mission seems to have failed. In its 6-year administration thus far, Taiwan’s economy has stagnated, prices have risen, college graduates’ average salaries have gone down, and house prices have soared beyond what most people can afford.

It was in this context that the Sunflower Student Movement forced the Taiwanese people to rethink their faith in the neoliberal project. If the movement had not drawn attention to it, people would not have taken heed of the agreement, nor would they have realized that Taiwan is a small economic entity with small market that could be harmed by huge capital investment and that Taiwan’s vast numbers of small and medium-sized businesses may struggle in the face of globalization. The movement has created new discourses and explanatory frameworks which are characterised by suspicion towards neoliberal ideology.

Yet, this ideological shift is not straightforward. Many people in Taiwan still worry that if Taiwan refuses to open its market and steps away from multilateral trade agreements like the Trans-Pacific Partnership, its economy will collapse. People are confronted with a dilemma: they know, on the one hand, that it is good for Taiwan if China opens its enormous market to them, yet on the other hand, investment by China can harm Taiwan’s domestic economy and endanger national security. These concerns once again reveal that for many protesters, they are not opposed to China as such,  but to its huge reserves of capital. More precisely, they do not object to further communication or cooperation cross the straits, as long as it is good for Taiwan. But they worry about aggressive investment from China.

Although surveys show that around 70% of the Taiwanese people have doubts about the current version of TiSA, President Ma decided to ignore the people’s demands: He agreed to enact a law for the monitoring of future trade negotiations with China, but he refused to implement the law for TiSA. Indeed, he rejected any possible amendment of the agreement.

Ma’s stance only makes sense if we consider the great pressure from Beijing. That Beijing should be infuriated by the movement is understandable; for China, the agreement is more like a carrot offered to Taiwan having realised that its stick cannot hold back Taiwanese people’s growing identity and even support for Taiwanese independence. Beijing started stigmatizing the Sunflower Student Movement as a Taiwanese independence protest, and putting constant pressure on Ma. Yet Beijing’s irrational and emotional reaction can only lead to the opposite of what it wishes, furthering mutual hostility between the two countries and pushing the student protest into an anti-China movement, just as happened in Hong Kong.

In the end, on April 6, the President of the Legislative Yuan, Wang Jin-pyng, stepped out and promised to fulfil the students’ demands, and the students left four days later in response to this gesture of good will. Wang’s concession reminded the people once again of The Economist magazine’s nickname, Ma the incompetent bumbler, for Ma was neither capable of dealing with China nor the Taiwanese people. But it should have gone further. His allegiance to China, his naïve belief in neoliberalism (the full economic integration with China), his ignorance of the will of his own people, his breach of democracy, and his violent measures to quell the dissenters; all these have earned him the title of neoliberal dictator.

Feng-yi Chu is a DPhil student in Oriental Studies at the University of Oxford.