Budhan: Finally…finally…tell me, what was my crime? Why was I killed? I was only eating a paan (beetle leaf). Is even eating a paan, a crime for us? My wife is now a widow? My son is orphaned. What will happen to them now that I am gone? Did my crime lie in the fact that I was a Sabar? A DNT?! (Translated by Sonal Baxi, Bhasha Research and Publication, 2010)

This epigram comes from the penultimate scene of the play Budhan (1998) directed by Dakxin Bajarange Chhara. The play documents the death of Budhan Sabar—who was killed by the police in 1998—and the subsequent court case, spearheaded by author and activist Mahasweta Devi. Devi had demanded an investigation into the accidental/unnatural death of Budhan.

Budhan Sabar was a young man who belonged to a so-called criminal tribe, a category legitimised by a colonial policy and subsequently embossed in the structure of post-colonial India. In a dystopic modern state, the spirit of the dead Budhan awakens and takes to the front stage, asking apocalyptic questions in an unprecedented rhetoric which the audience (primarily non-indigenous, majoritarian middle class, uppercaste men and women) is yet to come to terms with. Reiterating unanswered, unaddressed social injustices in the presence of citizens outside the affected communities, the spirit of the dead subhuman enters into a dialogue within the neo-liberal urban space, provoking the janta (the common person) to raise their voices and seek justice at the local level.

In 2012, a group of Canadian Indigenous artists, including Lee Maracle and Columpa Bobb, united with members of Budhan theatre to participate in a community theatre workshop to prepare a short piece connecting their interconnected stories of dispossession. This was the beginning of an alliance between Indigenous artists across colonies, addressing issues of marginalisation. 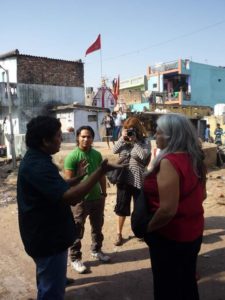 The idea of Indigenous-Non-indigenous co-existence and inter/intra relationships is extremely complicated in India and indigenous identity is layered. A proper analysis of the diversity of languages spoken in India can open up multiple possibilities for contesting the several attempts to bring diverse caste communities under any single umbrella such as “Indigenous”. The work of scholar- activist Ganesh Devy has been created a historiography of these multiple zones of contact in the subcontinent and the relationships between linguistic communities within the geo-political space that is India.

It is in this context that I situate my interaction with the Denotified Tribes. Being specific, I have primarily worked with the Chhara community in Ahmedabad and the Kheria Sabars and other nomadic/semi-nomadic communities in the district of West Bengal, since 2008. The discriminatory Criminal Tribes Act of 1871 criminalised the occupation of several caste communities. Since most of these communities were service providers, as Ganesh Devy recognises in his essay A Nomad called Thief, many lost their occupations. No alternative occupation was in place and these non-sedentary groups who were performers and acrobats, became dispensable, exiled to the fringes of society. They became a potential “other” which civil society felt as a threat to its well-being. As the stigma of “born criminals” was attached with these communities—even after the law was repealed and finally they were Denotified in 1952 by an independent state—the emerging nation failed to recognise the “keepers of diversity”. They were pushed into urban ghettos or left on the roads of an emerging nation state. They became the Road Allowance People of India.

When I met Filmmaker Dakxin Bajarange Chhara in 2008 at a conference, I immediately connected with the story he narrated of the subjugation of his caste community. By then Ganesh Devy and author-activist Mahasweta Devi had already started working with the rights of the ex -criminal tribes across India. Budhan theatre was established as a cultural wing of the Chhara community in Ahmedabad. Budhan is a platform for Indigenous and Non-Indigenous alliances and group has been continuing to work with other denotified groups across India. Apart from creating awareness through theatre, there have been provisions and programmes designed to escalate the concerns of these people who do not have the means to take up their cases through legal platforms. Several committees and commissions have been setup since Independence, but unfortunately the stigma has remained. When I visited the community in 2008, I was warned again and again about the notorious locality where the Chharas lived. There has been important work to raise awareness of these experiences, like that of Meena Radhakrishna on Denotified Tribes in specific areas, but unfortunately meaningful dialogue is still absent.

Budhan Theatre tried to enact their plight in front of police stations and academic institutions. When it seemed that things were getting better, the community has more recently received threats and faced charges. These developments have threatened the bond that was believed to have been forged over the years with people outside the community, especially the alliance that was initiated and gradually developed after 1998.

As the young members belonging to these communities are ostracised at several levels as they grow up, it becomes difficult for them to find a job or a position in society. This is where I situate the social construction of crime. A person is never born a criminal. It is the politics of underdevelopment that needs to be looked at afresh to locate the tribes in question within histories of dispossession. With constant threats from the dominant ideology, which still considers them as criminals, they often enact their discontent by violating social norms. As I started documenting the plays of Budhan Theatre and analysed them, I could feel how the plays were testimonials through which communities were reclaiming their voices, their languages, their cultural practices and above all their recognition as citizens of a democracy.

Mapping traces
I started working with Mahasweta Devi in 2012 in order to understand the process of mapping the communities who were scattered across the state of West Bengal. Certain welfare organisations like the Paschim Banga Kheria Sabar Kahan Samiti have already started working with the Sabar community in the district of Purulia. The Sabars are primarily forest dwellers and have been a hunting and gathering society. With the encroachment of the forests these people were exposed to crime. Many men have been imprisoned, with no proper support system to advocate for their legal rights. While interviewing Mahasweta Devi for the documentary “Vimukti“—that was an outcome of the research conducted by ICSSR on the educational attainment of Denotified tribes in India—she voiced her discontent with the inaction of the educated middle class Bengalis who failed the local/original inhabitants again and again. Without empathy for the “others”, itself a product of policies of occupation and encroachment, a society cannot become sustainable. When I started collecting the songs of the Dhekaru (listed as denotified) people in West Bengal, I could document how they have recorded historical events through their songs. This documentation is a ‘writing from below”. The narratives challenge the ongoing assault on Indigenous people across the world. New alliances are being formed to deal with emerging neo-liberal economies.

The idea around Indian caste systems and the categories they are based on have never done justice to the multiple contact zones we embody. Any attempt to create a space for the “other” has been thwarted with more complex issues of defining the under-priviledged as a social category, leading to more class and caste oppression in the public domain. The upward mobility of class makes social stratification more complex and M.N. Srinivas was correct in pointing out the nuanced process of modernisation in India. There have been several attempts by scholars to resolve these complexities by creating spreadsheets on caste-identities that are extensions of colonial anthropological enquiries and practices.

India is a land of multiple contact zones and so the idea of hospitality in the Non-Indigenous/Indigenous relationship is not easily translated. The situation is similar to colonies in North America. There were also many thriving languages before the advent of the “founding nations” who changed multilingualism through the introduction of the residential school system and the 60s scoop where Indigenous children were removed from their families and placed in the child welfare system. As communities battled small-pox, policies of assimilation deprived them of their land and languages. The colonisers were not able to do the same in the subcontinent. Instead, they created the middlemen (the English educated Bhadraloks/middle class intelligentsia) who subjugated their own people. British colonialism and the laws enforced in terms of land as a category for accentuating citizenship and the subjugation of the landless created suspicion of non-sedentary groups, cementing a permanent rift in the grey zones of Indigenous/Non-Indigenous interactions in India.

Colonial practices across the world are responsible for the dislocation of Indigenous populations. Community theatre and art practices are trying to initiate a dialogue which is otherwise absent in our societies which have realigned themselves with global capital. The diverse ramifications produced have normalised the subjugation of the poor, landless, and marginalised peoples whose existence is not recognised in the global market of surplus value.

Dheeman Bhattacharyya is an Assistant Professor of Comparative Literature at Visva-Bharati University. His area of specialisation is Literature and the Other Arts. As a performing artist, his idea has always been to cross-pollinate disciplinary practices to effectively utilise the research findings in the communities he has been working with since 2008 by creating a dialogue through the arts within and outside academia. On Twitter he can be found @DHEEMAN79592643