Aleida Violeta Vazquez Cisneros belted out another poem entitled, “Que me falta color” (That I’m lacking colour). The poem, like many other experiences she’s had, is about her Blackness being denied. “You? Black? No! Black are the people from Cuaji!” Cuaji is short for Cuajinicuilapa, a southern coastal pueblo in the state of Guerrero, Mexico. “Here, negritude abounds,” she says, with pride, pointing to histories of Black settlement in the region dating back to the Colonial period (1521-1821). 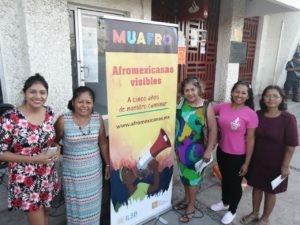 Aleida recited this poem in Cuaji, her hometown where she lives, works, and loves. She was on the footsteps of the Town Hall, passing out flyers to remind passersby of the 2020 Census which the Instituto Nacional de Estadísticas y Geografía (INEGI) conducted in March 2020. In 2019, Mexico became the last Latin American country to recognise Afrodescendants as an ethnic group. Part of the Census included an extension of efforts to quantify this population. INEGI’s surveyors were required to ask the following question verbatim, “Because of your ancestors and in accordance with your customs and traditions, do you consider yourself Afromexican, Black, or Afrodescendant?” The three categories are meant to be interchangeable, encompassing geographically variant ways of self-identifying. Aleida was working with two Afromexican feminist organisations on campaigns to raise awareness of the Census.

Around mid-March, when Mexico began its contingency measures to halt the spread of the COVID-19 coronavirus, these organisations stopped their Census campaign of doing outreach work, travelling to remote rural towns which were known to have Afromexican residents. The organisations in question are Colectiva de Mujeres Afromexicanas en Movimiento (MUAFRO), a network comprised of Afromexican women and organisations from the states of Guerrero and Oaxaca, and Mano Amiga de la Costa Chica, which works with MUAFRO but is its own independent organisation. They collaborated for the Census campaign, and, overall, both organisations work to empower Afromexican women through advocacy and human rights work, using workshops, seminars, and leadership and self-esteem training, covering a range of concerns including gender and sexuality, history and identity, cuisine and poetry, as well as political participation. Aleida incorporates her poetry into this work at every opportunity. For her, poetry is a language that offers hospitality to, and recognition of regional differences. There are possibilities for deeper bonds to be made without adhering to the conventional rules imposed by education. Her performances have gone viral in the region and beyond. She says that there is usually a little girl in the audience, listening intently to poetry which affirms her own beauty.

Aleida draws inspiration from her own childhood. She grew up in a Black matriarchal structure where her maternal grandmother and her aunts were all referred to as Mamá, followed by their first name. She recalls being transfixed by generations of storytellers who would tell tales in vivacious rhythms and flirtatious cadence. She remembers language as an adult toy. They played with words, packed them with layered meanings—double, triple entendre—to tease out lust, desire, and pleasure. It was power! And so, for her, Blackness became a way of embodying poetry. For the longest time, she thought everyone knew about the magic in Cuaji. How could they not? To her surprise, when she went to college out of state, she realised that Cuaji wasn’t even on the map. She had to tell her friends of the collective taxis that brought people to Cuaji, the last town before the state of Oaxaca, after a four-hour ride from Acapulco. This town, her family, and her childhood here are the inspiration for her poetry.

More recently, her writing has drawn from other Afro-Latin American poets such as Afro-Peruvian poet, Victoria Santa Cruz, Afro-Costa Rican poet, Shirley Campbell, and Afro-Colombian poet, Mary Grueso. From the North American Black experience, she is inspired by the Civil Rights Movement, gospel music, and Beyoncé. Local music also offers inspiration. Chilenas, for example, use a similar pentameter and narrative structure to those Aleida uses in her poems. Chilenas, as with many other music genres in Mexico, have profound and unrecognised Afro-Caribbean influences that have travelled back and forth from the Caribbean over centuries, from the rhythms to the instruments (García de León, 2016) . Her poetry is another embodiment of these migrations, roots and exchanges. These influences have led Aleida to often revisit her poems, to feel out a word, experimenting with language to access the senses. This practice has opened up a political perspective of the world, necessitating a constant negotiation with the historical record, where bodies like hers have been made to disappear, both figuratively and literally. Such political orientations have been foundational to Aleida’s involvement with organising, particularly petitioning federal government agencies for women-centred agricultural, artisanal, and cultural projects. But, after the femicide of Adelaida Evelia Acosta Genchi, an Afromexican leader, in February 2018, she took a step back from organising, fearing for her life.

The murder of Acosta Genchi was the sixth case of femicide in two years, amongst other politically motivated killings in the city of Ometepec (Añorve, 2018). The problem of violence against women and girls in Mexico and in Costa Chica is a problem compounded by geography where rural Black and Indigenous women are already at a disadvantage because there is a lack of resources to prevent domestic violence and to support survivors. There is also a lack of positive media representations of Black and Indigenous women who are used for comedic effect. In social media, a Black woman nicknamed Juana la Costeña from a nearby town, became a popular meme for her rural-coastal accent and manner of speaking. The most recent iteration of Juana as a meme is a drawing which features her as the COVID-19 coronavirus. In this context, Aleida’s poetry is fundamentally necessary to resist and challenge racism and negative perceptions. Although Aleida retreated from political life after the murder of Acosta Genchi, she has found courage and a platform to share her poetry performances. The campaign to bring awareness of the 2020 Census helped her to spread her message further.

Aleida and the many organisers who have been working on this campaign are keenly aware that INEGI’s Census will not end racism. They have heard many academics repeat the same argument, locally, nationally, and internationally. But, as rural Black women organisers, they are closest to the historical sites that have been plantations, where their social reproductive work has been vital to survival for centuries. The recognition and the Census—the counting of Black peoples—is but one legal channel that is opening up to continue this multifaceted struggle. They also know that the Census is part of the racialising machinery of the state. Still, they understand that racism existed even more intensely when they were not recognised and counted. Constitutional recognition and the Census, despite flaws in the surveying methods, will allow them to petition the federal government for infrastructural resources, including those related to education, health, labour, sanitation, and political representation.

Currently, Mijane Jimenez Salinas, leader of Mano Amiga, is leading efforts to address food insecurity caused by the coronavirus. This campaign consists of gifting food baskets to rural women. These food baskets are meant to tackle food insecurity that women are facing as a consequence of rising food prices and other economic impacts of the coronavirus. The food baskets also include chicks to be grown into egg-laying chickens; rice, beans, cookies, cleaning products, and organic vegetable seeds like radish, courgettes, cilantro, and epazote, a common herb used in local dishes. Both groups are open to collaboration, cooperation, donations, and other forms of material support.

Aleida’s poetry draws from geography, which as McKittrick (2006: ix) argues, “is infused with sensations and distinct ways of knowing.” Aleida has a gift to draw out these spatial poetics with her voice, making words resonate in chambers of embodied memory. These are not merely memories of the plantation and its violent afterlives, but also of the plantation where Black life thrives in resistance, making present what McKittrick (2013: 5) calls a “poetics that envision a decolonial future.”

Ulises Moreno-Tabarez is a Postdoctoral Associate in the Department of Geography and Environment at the London School of Economics. He is currently living in Ometepec, conducting ethnographic research about environmental racism in Costa Chica of Guerrero and Oaxaca which can be understood as Afro-Indigenous geographies because of their histories, cultures, and politics. He is happy to do translation work to support the work of these organisations. He tweets @MigrantSpectres