Rule Britannia: from Empire to Brexit to Covid-19

It’s a pity that in early 2020 the Conservative party and its leader were not more alert. Greek scholar Boris Johnson should have known that hubris – excessive pride and boasting – annoys the Gods and can lead to nemesis – downfall and divine punishment. After months of triumphant claims that Brexit was ‘done’, that ‘we’ had taken back control, and that Britain would become Great again, came the unexpected reckoning. The Covid-19 pandemic eclipsed discussion over leaving the European Union and future trade deals.

After the December Tory election victory, the government and much of the media appeared to forget that 2019 had been a year of panic and chaos as votes were lost in Parliament, and promised deadlines were repeatedly missed. There was panic buying of food and toilet rolls in March 2019 when fears of a chaotic EU exit on the 29th approached (which might explain the shortages of these when panic buying began again almost exactly a year later when lockdown loomed).

The political low-point of 2019 was the illegal prorogation of Parliament and then the spreading of lies blaming or applauding northerners for swinging the leave vote. We easily forget that it has just been six months since a Prime Ministerial adviser (Cummings) was appointed who wanted to employ weirdos and misfits in Downing Street, to sack civil servants, and take control of government decisions. After he fled to Durham in March 2020, and was duly reprimanded by most of the public, it became apparent that he (and Boris Johnson) did not think that rules applied to him.

To recap briefly about the votes, elections and lies: the most careful academic study to date of voting in 2016 referendum to leave or remain in the EU found that an association of voting leave with deprived areas was negative. It was adults in wealthier areas in the south and south-east of England that predominantly voted to leave. Nowhere in the northern areas were there as many leave voters as in the south. While the nastiness around the Brexit campaign, which included the murder of MP Jo Cox a week before the vote, seemed to be overlooked and snide comments were made about ‘remoaners’, on what terms the UK would ‘leave’ the EU had still not been decided four years later.

It is not that Theresa May was any better than Johnson. She had insisted on presenting Bills to Parliament which were rejected. Almost everything she did was rejected. The whole Cabinet supposedly agreed to the ‘Chequers Plan’ in July 2018, but two days later Johnson (then Foreign Secretary) and David Davis (Brexit Secretary) claimed that the Plan was so awful they had to resign. A vote on the withdrawal agreement was finally held on 15th January 2019 leading to the worst defeat ever suffered by a British government. On 29th March we should have left the EU, but didn’t.

In local elections in May, the Conservatives lost 1,330 local councillors, and Labour lost 84. Jeremy Corbyn, Labour leader who had increased party membership to half a million, continued to be demonised in the media and by opponents in Britain and overseas. In June Theresa May resigned and thirteen candidates stepped up to be leader, eight of them having attended Oxford University. A poll found that only 10% of the public would trust Boris Johnson to babysit their children, but he was chosen, just by Conservative Party members, to be the Prime Minister. He presumably then celebrated with his girlfriend, who gave birth to either his 6th or 7th child nine months later, while he was still married to his second wife.

In September 2019 Johnson attempted to stop parliamentary scrutiny of a Withdrawal Bill by proroguing Parliament. The Supreme Court Judges unanimously declared the move unlawful. Johnson called an election “to get Brexit Done” on 12th December and the Conservatives were triumphant, gaining a huge majority of 80 seats. Claims that Labour under Corbyn had suffered the worst Labour defeat ever were misleading, as he gained a 32% share of votes. In 2010 Ed Miliband as leader only secured 30% of the vote, Gordon Brown in 2009, 29% and 27% had been secured by Michael Foot in 1983. Labour carried out some soul-searching and eventually elected Kier Starmer, former Director of Public Prosecutions, as their new Leader. 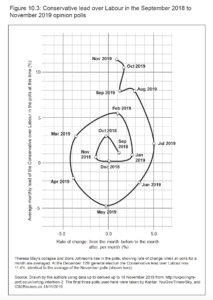 Business prospects for Britain were already dire throughout 2019, long before their dramatic collapse in spring 2020. The Office for National Statistics reported in March 2019 that spending on education had fallen for three years in a row, productive output in the economy had fallen in all areas, as had business investment. The balance of payments was in free fall. Borrowing had risen and it was clear much of the work in Britain was being done for low and precarious wages. New immigration laws were proposed (and agreed in June 2020) along the lines of an Australian points system, with lower wage migrants largely excluded and Home Secretary Priti Patel acknowledging that her parents would not have been allowed into the country under these rules.

By March 2020 hubris reigned supreme. An airline, Flybe, had collapsed, forerunner of a general collapse of the airline industry, stock markets slumped and while the world economy sank, the UK economy sank faster. Locking the entire population down in their homes from 23rd March was too late to rapidly control Covid-19, and consequently locked the economy down for longer and led, by mid-June, to calamity – despite government attempts to temporarily fund many workers. The OECD forecasts were that the UK will suffer the deepest downturn of all advanced economies.

The pandemic showed which citizens were more valuable as workers and to the economy. A majority of the Key Workers keeping the public fed, cared for and nursed were the very low paid workers deemed unacceptable as migrants. While all health workers were praised for their devotion and there was a regular Thursday clapping for their efforts, the reality was that many died due to an absence of personal protective clothing. Black and Asian staff, often working in the health care jobs where this happened most, died in greater numbers than white staff. Many thousands of residents in Care Homes and people who were disabled died needlessly without relatives around them.

Anyone expecting the government to take responsibility will be disappointed. Ministers from the Prime Minister down sought to blame scientists for giving them the ‘wrong’ advice, to blame China for spreading the virus, and eventually low paid workers – for taking or not taking public transport. By mid-June it seemed that footballers were making the kind of ethical political decisions that Ministers shied away from. 22 year old Marcus Rashford from Manchester United successfully intimidated the Prime Minister to U-turn on a decision not to give vouchers to poor children who would probably go hungry over the summer. Over a million children benefited. The virus has made it clear that, for the current government, the old, the disabled, poor children, black and other minorities are first in the line-up of disposable citizens.

As if the government had not got enough to ignore, lie or bluster about, they were also faced with a ‘Black Lives Matter’ uprising of citizens of all ethnicities and classes globally, outraged at the murder on 25th May of an unarmed black man in Minneapolis, USA by white policemen. The establishment argued against the toppling of statues of men who made money through slavery and treating black people as sub-human. Boris Johnson warned that Britain cannot “photoshop” its long and complicated cultural history by removing public monuments and to do so would be a “distortion” of our past, perhaps forgetting the times he had photoshopped his own past, and his cultural history of insulting and demeaning black and minority people in Britain and abroad.

Covid-19 will pass; but it and the shenanigans of Brexit will affect our society and economy for years to come, but there is hope that an abject lack of knowledge about Britain’s imperial past may begin to be recognised. There is hope that the overt and covert racism, exacerbated by the Brexit vote, will diminish as a more honest presentation of the imperial past is presented to the whole country.

It may be hard to persuade singers at the Last Night of the Proms that, however much we hope that Britannia will rule the waves again, the most we can do is a couple of pointless aircraft carriers with no planes, and the land of hope and glory will not have its boundaries spread wider and wider, especially as the Union of its four countries may be in danger of breaking up. Hope for the future will not mean ‘taking back control’ of a lost empire or gaining a superior place in the world.

Sally Tomlinson is Emeritus Professor at Goldsmiths University of London and an Honorary Research Fellow in the Department of Education, University of Oxford. Her latest books are (with Danny Dorling) ‘Rule Britannia: Brexit and the end of Empire’ (Biteback 2019) and ‘Education and Race from Empire to Brexit’ (Policy Press 2019). Danny Dorling is Halford Mackinder Professor of Geography at the University of Oxford. This article is based on the 2nd edition of Danny Dorling and Sally Tomlinson “Rule Britannia: Brexit and the end of Empire” being published by Biteback on June 23rd 2020.