Disrupting transmission: what the coronavirus crisis tells us about the geography of the economy

The exact moment when it began to dawn on the UK population that the Covid-19 crisis was not just another case of seasonal flu but rather a crisis that was both serious and fundamentally ‘way-of-life altering’ is a point of debate.  But images of supermarket shelves being stripped bare by panic buying must be high on the list of light-bulb moments of realisation.  Aisles were emptied of everyday staples such as bread, pasta, and toilet paper, as well as fresh fruit & vegetables, flour and, perhaps inevitably, alcohol.  Once emptied, supermarkets remained that way for days, and although stocks are recovering, may not return to pre-crisis levels for some time. Similar frantic consumption was seen in other countries.

Rapidly emptying shelves drew attention to the fact that one of the things that enables large supermarkets – and indeed the rest of the economy – to work so effectively for the majority of the time is the need for flow; that is, for the smooth and regular movement of goods and commodities over geographical space through networks that span over almost the entire world.  Flow works so effectively most of the time and produces the regularity of supply that most consumers take for granted.  The entire globe is now a more or less interconnected production and consumption space, linked by extensive and intricate systems of distribution and logistics (Coe and Yeung 2015; Cowen 2014).

It is exactly this global system of flow and interconnection that enabled a new virus to within only a few months spread sufficiently to cause a pandemic that led to the lockdown of populations and economies worldwide (Figure 1).  Systems of distribution and logistics have evolved to work under an expectation of open borders and more or less free movement, and under predictable conditions of supply and demand.  Covid-19, and the introduction of enforced social and physical distancing to disrupt the transmission of the virus has also disrupted these expectations at many points along these networks. 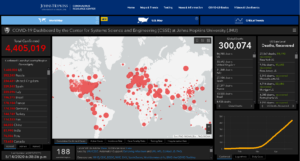 Figure 1: Cumulative confirmed cases of COVID-19 as of 14th May 2020 (Source: COVId-19 Dashboard by the Center for Systems Science and Engineering (CSSE) at Johns Hopkins University.

As networks were disrupted and panic buying began, so supermarkets ran out of stock.  With populations encouraged to stay at home wherever possible, many moved their shopping online, and turned to one provider in particular.  Within 25 years Amazon has risen from being a small online bookshop to one of the world’s largest companies, a global digital platform that has become a key source of goods and services.   Platforms such as Amazon have risen in prominence over the past 10 years (Kenney and Zysman 2020; Langley and Leyshon 2017; Srnicek 2016) and many platforms have had a ‘a good crisis’, in as much as they have either increased market share, income or share price – and in most cases all three.  The success of these platforms has been to act as intermediaries between buyers and seller, but also to analyse the data they collect from use of their services to develop new kinds of products and service that give them competitive advantages over their rivals.

As other firms furloughed or laid off staff as the economy collapsed, Amazon committed to employ an additional 75,000 workers worldwide to respond to the demand generated by the crisis.  An indication of the growing importance of platforms like Amazon can be seen in the rise of its distribution networks around the UK (Figure 2).  Amazon now has an extensive network of order fulfilment centres in the UK to convert orders into rapid deliveries, contracting with distribution companies who, in turn, contract with self-employed drivers to make door to door drop offs.  Amazon has successfully linked individuals and households to commodity supply chains that bypass traditional “bricks and mortar retailers”, resulting in a decline in the traditional high street and retail centres, which has led to an increasing number of closed and boarded up outlets. 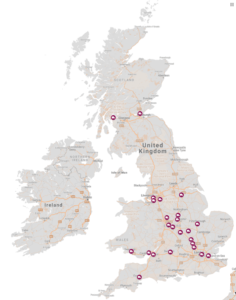 Town and city centres, already struggling due to competition with online platforms, that offered 24 hour accessibility and a long-tail inventory, became deserted during lockdown and there are fears that many of the shops closed may never reopen, despite the emergency government support given to all businesses.  This, then, might seem to be a perfect opportunity for digital platforms like Amazon to further drive home their advantage and take even more market share away not from bricks and mortar retailers but other areas of supply and distribution too.

However, although Amazon is one of the few firms to have made money out of this crisis, its digital focus does not mean it can somehow magically escape the implications of the crisis, for at least two reasons.  First, to obtain the items its sells on its platform, they must still be provisioned, and so Amazon is also at risk of fragile supply chains breaking down in the same way that happened to supermarkets. The dependence of global manufacturing on factories based in China, the first economy to be affected by the crisis, means that many supply chains have already been disrupted and have not fully recovered.  China is tentatively working its way back to opening its economy, and as the rest of the world does so at different speeds, it is inevitable that many just-in-time supply networks will be found to be less than robust.

Second, Amazon’s fulfilment centres still need people to sort and pack the orders as they come in from suppliers before being sent out to customers.  Although this process is being automated, it has a long way to go before this is completed, and distribution still requires people to make it work. That Amazon intends to take on additional workers in response to the crisis confirms this.  But where there are people clustered together, so there is a capacity for the virus to spread, and fulfilment centres in the US have suffered outbreaks of the virus since the onset of the crisis.

In addition to digital platforms, consumers also fell back on a more traditional form of retailing: local shops. The traditional corner store sells a wide range of staples, a bit like a mini supermarket in many cases, although with one big and important difference: their prices tend to be higher than in supermarkets.  Small shops are unable to achieve the same economies of scale as large supermarkets, who use their buying power to drive down prices from suppliers and gain additional efficiencies through their just-in-time distribution systems.  In the crisis, small shops were initially much more adaptable.  Supermarkets were dependent on long supply chains to restock, but shop owners were able to make repeated trips to their local wholesale warehouse, and restock as when they needed, multiple times a day if necessary.

This was of course dependent on wholesale warehouses being able to replenish their stock through similarly long distribution networks, but in the immediate wave of panic buying small shops coped well, and also adapted their product range, to stock more toilet paper and kitchen towels, and branching out into hand sanitizer and face masks. Another sector thriving in the crisis are farm shops and related businesses that provide fruit and vegetable boxes and the like.  Such suppliers are often locally sourced, with short supply chains and a limited range of products, which are often seasonal, and can be relatively expensive.  But at least they are available and supporting local suppliers.  Economies need ways to adapt to the crisis that mitigate against the virus spreading further, in the form of a slow and cautious expansion, with an ability to be prepared for some setbacks.  In building for this it seems certain that there need to be a more diverse and resilient local economy, and these examples of local supply chains are useful exemplars.

The coronavirus crisis has brought into focus the fragility of what are in normal times highly efficient albeit long and extended supply chains.  These supply chains work according to a logic of just-in-time, not just-in-case, and have served to drive prices down while offering a bewildering array of choice.  However, this efficiency was at a price: a high susceptibility to a breakdown in the flow of goods and people as governments sought to also stem the flow of the Covid-19 virus.  And this does not even consider the environmental costs of moving commodities through such networks.

While things have slowly improved over recent months, the uncertain nature of the pandemic means these supply chains remain precarious.  Supermarkets are getting back on their feet, although there are concerns about shortages: warehousing for supermarkets is thin by design, because, as Tim Lang has argued, ‘the warehouse is actually the motorway’ (2020, 3).   Some current concerns are the harvesting of food in fields, which has seen farmers and other groups seek to recruit a new land army to replace the casual seasonal workers normally brought in from the EU.

Economies around the world will need to rebuild and adapt in recovery from the pandemic. We do still not fully understand the virus and its impacts, but as that understanding grows so it will inform plans for recovery. While pandemics were a known economic risk, so long as the risk did not materialise there was no reason to rethink the stretched and contingent nature of supply chain networks fundamental to modern economies.  As Laura Spinney has argued, it is precisely the extension of these networks into hitherto stable ecological systems that has brought wild animals into contact with industrialised farming which facilitates the transmission of new viruses of animal origin to humans in the first place.   Building more local and resilient networks of provision and supply to disrupt that transmission must surely be part of the response.

Andrew Leyshon is Professor of Economic Geography in the  School of Geography at the University of Nottingham. @AndrewLeyshon