Covid-19, “European Science” and the Plague

I am writing this post from my room in South London, where I am currently in self-isolation. I have to think about how, about a month earlier, I gave a lecture to our Geography first years about the plague. To a room full of novice human and physical geographers, I said: “I know I am always banging on about the plague, but plague outbreaks have been really important events in history that continue to have repercussions for many things today – from legal rights to the way we do science.” I usually get some weird looks, especially when I start talking about things such as Byzantine refugees, witches, and other perhaps unusual entities in Geography. It is very likely, however, that this lecture will resonate quite differently from next year onwards. It is not that Covid-19 is like the plague – the plague is not even a virus, it is caused by bacteria. However, comparative social measures were adopted, and reinforced during these earlier outbreaks. From the current situation, we can see what even a comparably small outbreak of an infectious disease can do to society at various scales. I want to put this less as a scholarly task than as a helpful resonance that may build an affective connection not just to the past, but across today’s geographical regions. 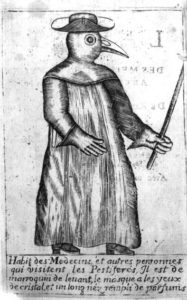 Although I’m not an expert on the plague, it is often mentioned in work relating to my lectures, whether it’s in discussion of climate data or of class struggle in Europe. For this reason, I have been reading about it from different perspectives. This weekend, I was delighted when a friend and science scholar (thanks, Uli!) recommended a podcast on German radio that featured a historian of infectious diseases, Katharina Wolff (she also participated in another useful broad/podcast). What I enjoyed in particular was how Wolff moved between the scale of society and that of the individual. In particular, she stressed that ‘an epidemic is something that one does’ (‘Seuche ist etwas, das man tut’). We are not powerless during an epidemic, and there is quite a lot one can do – especially by not doing a lot of things. As my local MP, A&E doctor Rosena Allin-Khan, has also emphasised in her messages: anyone can take action, regardless of government inaction, and that action should primarily be to withdraw from physical social life as much as possible. Here is a great video by US doctor Emily Porter that explains why this is helpful.

At the same time, Wolff made an argument about the lasting social consequences of an epidemic. On one occasion, Wolff phrased this along the lines of (I put this as a summarised translation): ‘illnesses affect the individual, epidemics affect societies – every epidemic or pandemic leaves traces in social life, from legal changes to cultural practices’. As mentioned earlier, this does not only include laws that regulate behaviour during epidemics – it also includes gestures, new kinds of cultural events and forms of solidarity. I really liked Wolff’s building of resonances across time, especially through the reading of old decrees from a Munich municipal archive. Although written in the Middle Ages, such instructions sound surprisingly modern. Further, she explained how, in the Middle Ages, many cities were visited by the plague every 10-12 years. Because of this, legal and social measures had to be put in place that would help with the response at the onset of the next wave. Over time, these measures have, of course, eroded, so now we are lacking these habitual practices and are experiencing them as an exceptional intervention.

A large part of the podcast was about these measures, and how people should critically evaluate them. Since epidemics function as a catalyst, they can be a force of good or evil. We are seeing this right now in public discussions of mobile phone tracing or pub closures. People are asking: how long are we okay with such measures, and are the necessary at all? Another discussion that relates to the loss of habitual practices is the perception of many people in the West that epidemics are a problem for everyone else in the world, but not them. In the podcast, this “geographic exceptionalism” was particularly emphasised by cultural anthropologist Hansjörg Dilger. That large numbers of people are dying in Europe and America comes to many as a shock. Despite the lack of trust in struggling healthcare systems, people are expecting them to still cope with the latest biological mutations. Since they are not, people are looking for analogies that may them help with the sudden shift in worldview. These include making links with a Europe (or places nearby) that experienced similar events in the past. Tellingly, books such as Pale Rider by Laura Spinney and The Plague by Albert Camus are sold out in many online bookshops (the #coronavirussyllabus project may be of additional help). 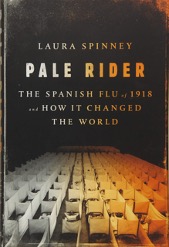 In my lecture last month, the focus on the plague and other epidemics allowed me to (I hope!) build exactly this connection to events that may seem distant, but have on-going repercussions. Now we find these analogies in the mainstream press. For example, the current re-evaluation of whose work is indispensable echoes post-plague advances in worker’s rights, even if these may have been only temporary. There are concerns about the effect on women, LGBTIQ+ people and minority groups given the experiences during the plague. Women and queer people may no longer be burnt as witches, and minorities such as Jews may no longer be officially persecuted, but different communities will be affected differently (see the violence against “Chinese looking” people, or special warnings going out to multi-generational Muslim households here in the UK). In some ways there are even direct parallels, in that queer people are still getting blamed and persecuted in some societies whenever there is a crisis, across the ‘developed’ and ‘developing’ world.

There are also parallels from a physical geography perspective. As physical geographers are painfully aware, past large-scale losses of human life through epidemics (e.g. the Orbis spike) have resulted in carbon being taken out of the atmosphere. This is an argument that is currently, and very insensitively, advanced by some climate activists. A more benign version focuses on the lack of airplane, ground traffic and industry pollution. Further, climate fluctuations themselves are linked to disease. For example, some scientists and historians have argued that the consequences of climatic events such as the Little Ice Age (brilliantly illustrated in the animation below) may have made people more susceptible to disease. In the present, environmental destruction, more than climate change, has been blamed for the outbreak of new epidemics. The climate is mainly seen as a compounding factor, especially when combined with environmental mismanagement, on-going consequences of colonialism and capitalism, and other natural and political disasters.

One thing that I especially emphasise is the loss of oral and written knowledge during the plague, which is perhaps more difficult to imagine today (unless we stop being able to maintain the internet or our libraries). Perhaps the experience of quarantine may help students understand – I hope in the most benign way – that people who had no internet or phones were somewhat more cut off from each other. Like today, cities tended to be the focus of both knowledge production and outbreaks – they are densely populated and experience a lot of through-traffic. During an upheaval such as an epidemic, intellectual life eventually gets put on hold. As a mild analogy, lecturers may still be giving online seminars this week, but when things get worse, they may be busy volunteering for food banks, hospitals, or neighbourhood organisations. The same goes for the students. Indeed, some university VCs have encouraged such pursuits for both staff and students. In the worst case scenario, people get sick to varying degrees. Now scale this up to imagine the conditions during the plague(s), not just with schools, monasteries and institutions closing, but also with the fragility of print media. The first major plague wave was before the advent of book printing, with select hand copied manuscripts that may also have had to serve as fuel during quarantines, or became destroyed in riots.

But it is also important to not just focus on the immediate disaster, but also the future that is simultaneously being ‘incubated’. Here, we may have some useful parallels again. Many authors in the UK media currently write hopeful pieces about the relaxation of both austerity measures and immigration rules. The NHS is deliberately underfunded to artificially prime it for privatisation – people are hopeful, that this changes, along with the punishing living and working conditions of precarious, but essential workers. In a related argument, migration scholars have called for a lifting of the ‘skilled worker’ earnings cap that ignores how much the current UK economy relies on ‘inferior’, so-called ‘unskilled’ work. Indeed, what eventually helped Europe recover was in part an influx of Byzantine refugees after the Ottoman takeover of Constantinople. While the emphasis here has been on the ‘skilled workers’, it is nevertheless an interesting analogy.

Byzantine refugees are credited for bringing some of the lost knowledge back, and not just ‘European’ knowledge (the Greeks and Romans were never just European anyway, given their geographical distribution), but also Middle Eastern and Indian texts (there is an interesting story map about this here). This event was key in reconnecting scholars geographically. A painting that illustrates this is The School of Athens by Raphael (1509-11). Although not every person in this painting has been clearly identified, there is certainty that it includes Muslim polymath Averroes/Ibn Rushd and Iranian spiritual leader Zoroaster. Likewise, Dante’s Divine Comedy also features three Muslim philosophers: Averroes, Avicenna and Saladin. An article called The grandfather of the European Enlightenment was Muslim in fact argues that Averroes was a key influence not only on the European Renaissance, but also the European Enlightenment. There are many more sources that confirm that European intellectual movements were not just European, but influenced by cross-cultural developments (check out Jim Al-Khalili‘s Science and Islam on BBC Player). If we look at our basic scientific measuring devices such as the compass (Chinese), calendar (Egyptian), clock time (Babylonian) and our numeral system (Hindu-Arabic), this should be evident. “European science” is not an entity that can be so easily isolated. 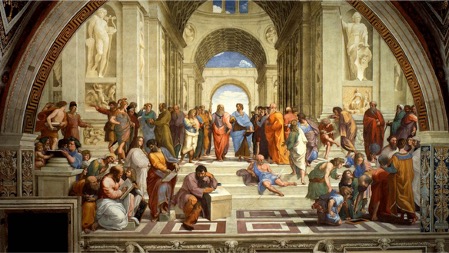 Image: The School of Athens – Painting by Raphael (Wikipedia)

Knowledge contracts and expands throughout history, because of events such as epidemics, wars, and migration. This is easy enough to understand, but it usually feels a lot more abstract. While I was not hoping for a crisis to make this connection more real, we are currently in the midst of one, and this spatio-temporal resonance may actually become more and more needed. Not only do past events highlight the need for a different way of teaching European science and history, but studying connections also provide emotional support. What we are dealing with right now is not (just) a scary state of exception, but something that keeps recurring – not just in ‘other’ parts of the world, but right here. As difficult as this may be, given the ubiquitous narrative about ‘Fortress Europe’ in more than one sense, I really hope that this connection rises to the surface not just in terms of disease control, but also in terms of shared knowledge and culture. This is something to which we can all contribute, in much the same way that we can contribute to keeping people physically healthy.