On the Frontline: Cultural injustice and invisibility in global peripheries

“I will tell you something before you start asking questions, I think that the problem is that nobody comes here, nobody knows how we live or what we go through and that’s why everyone thinks we’re evil.”

Francesca straightened her back against the chair as she was telling me this, staring fixedly at the roofs of the Quartieri outside the window of the school. As I proceeded with the interview, my thoughts kept returning to her statement, as I wondered how I would be able to translate the young people’s experiences to someone who has never visited the neighbourhood.

The Quartieri Spagnoli (QS) in Naples represent a central urban area of the city, constituting a maze of narrow lanes, resting on a slope between Via Toledo and Corso Vittorio Emanuele, two of the wealthiest streets of the city. The community of the QS is affected by high levels of disadvantage and participates in networks of crime and violence. With the highest population density in the city, children complain about not being able to leave their houses due to cars blocking their front doors. Moreover, the area is low in services and green spaces, with the height of the buildings stopping any sunlight from warming up the narrow lanes that make up the QS. 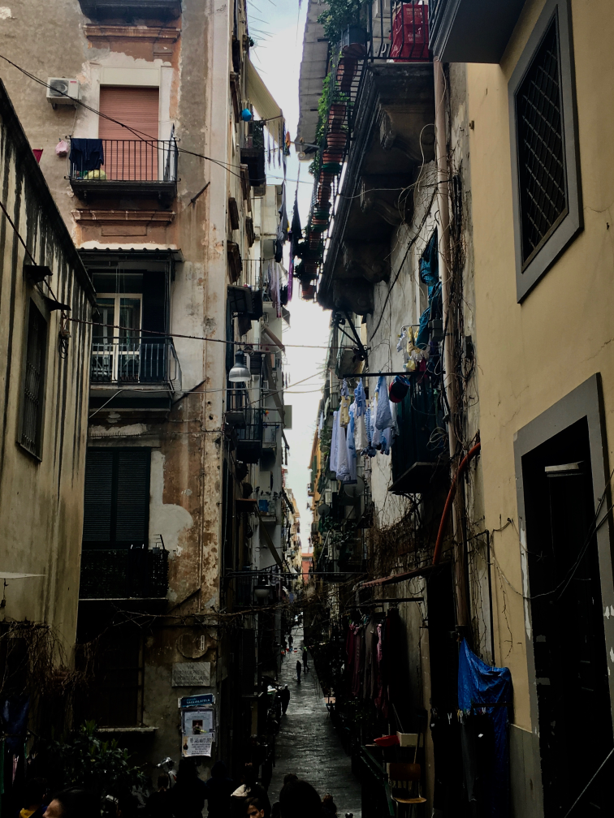 The streets and buildings form networks of relations, informal economies and social tensions, which both isolate and make this space unique. Given its lack of official municipal borders, the socio-urban structure of the area could be identified by the incidence of precarious labour, social deviance, immigration, school dropout, and cultural exclusion. “Tourists should not come here, this is a place that should not be seen”, another child told me when asked what he wanted people to know when they visited the QS for the first time.

The QS represent a space of exception in one of the wealthiest parts of the city, made invisible by the proliferation of commercial streets, smart-city development, and neoliberal narratives of globalisation and merit. In this site, children are among those most markedly affected by material inequality, violence, and socio-cultural deprivation. Global economic and human development is mostly thought of through a North/South dichotomy, with the developed and rich North leading the way towards prosperity in opposition to a chaotic and poor South. 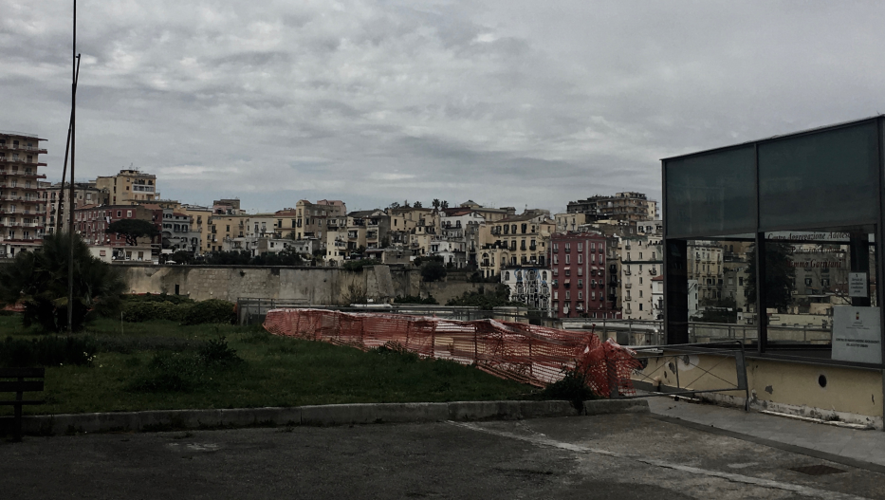 Evidently, places such as the QS represent a ‘South within the North’, and as suggested by the child quoted above, “should not be seen”. Arguably, spaces of exception of this type represent the hidden face of the neoliberal project, one that by forcing competition, individualism and creating ‘winners’, must necessarily hide its ‘losers’. These losers are not only found in the Global South, historically exploited by developed economies, but also within the North itself.

Étienne Balibar refers to places of this kind as “global banlieue”, places where socio-economic and cultural marginality live in close proximity to wealth and privilege. As I walked among the lanes of the QS working with local young people, I was constantly thinking about ways in which, following Francesca’s statement, I could explain this place to others, and I was faced with several questions: how can a space of this sort exist at the core of one of Italy’s major cities? In what ways do capitalist developments in the Global North create spaces of deep cultural, social, and economic inequality? And, most importantly, what are the consequences of these developments on the everyday lives of young people in the area? 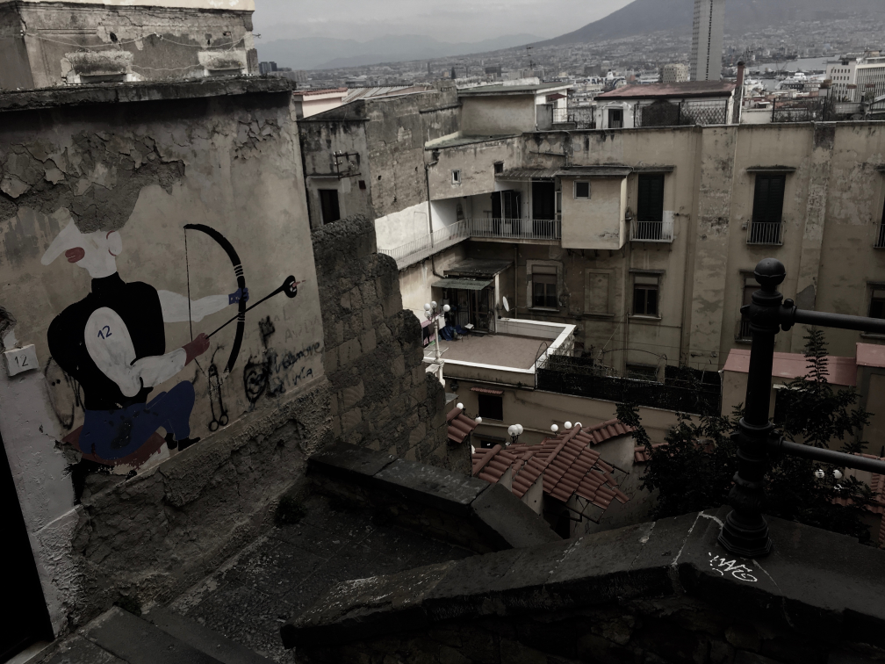 Given the unease around recognising neighbourhoods such as the QS as a consequence of our developed economies and societies, cultures tend to assign terms of scorn to refer to places of this kind, in order to portray the neighbourhood itself (and its inhabitants) as the source of insecurity and marginality in neoliberal economies rather than the other way around.  The ongoing ‘development’ of the QS as a site of social marginalisation and illegality has caused the proliferation of negative narratives and stigma shaping the lives of its inhabitants, with deeply engrained identities of ‘scugnizzo’ (for youth) and ‘camorrista’ (for adults) dominating the neighbourhood.

In the 19th century, the historian of organised crime Marco Monnier, highlighted the cultural and historical discourses assigning the role of dangerous youth to young people living in this space, discourses which have pervaded for more than a century. Therefore, the QS do not only represent economic marginality within the seemingly advanced ‘global North’, but also produce a number of socio-cultural and historical injustices, ranging from the embodiment of particular stigmas to the feeling of economic and cultural entrapment related to it. Indeed, what is particular about the QS, and other similar urban spaces, are the ways in which historical narratives of stigma start to sediment and become embodied in the space by its people, constantly negotiating who the stigmatised “we” are in relation to the more privileged “they”. 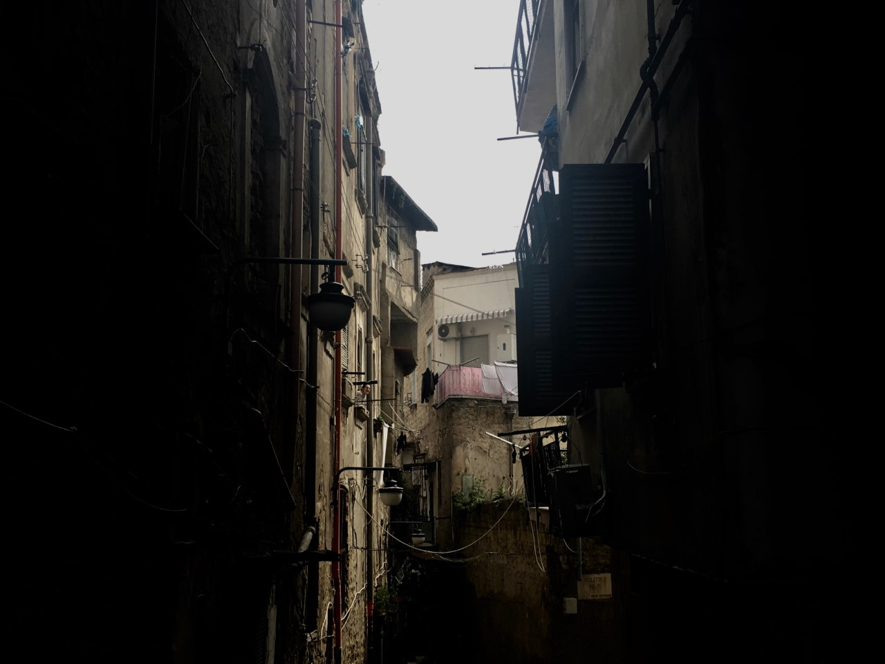 As the children kept describing their attitude and worries towards people considered ‘foreign’ to their neighbourhood – and their assumption that all neighbourhoods are ‘territories’ – it became clear how concerned they were about the stigma placed upon them by others, but also how they identified with the stigma itself. Indeed, a strong sense of territoriality and identification is often expressed through deeply engrained cultural identities. Therefore, the proliferation of the stigma related to a neighbourhood does not only depend on negative discourse ‘from above’, in media and politics, but also determines the ways in which the sense of youth in these spaces develops ‘from below’. This is something the children in the QS expressed through self-identifying as scugnizzi and building their place-based identities on behaviours such as violently addressing foreigners and engaging in illegal activities.

The only strategy that children in the QS find to attenuate the negative identities they embody is to thrust the stigma onto others occupying their neighbourhood as a consequence of recent migration from African countries and the Middle East. Indeed, newly arrived migrants tend to occupy the already economically marginalised neighbourhoods in Northern cities, leading to the disintegration of the deep cultural and territorial identification upon which the children based their understanding of themselves and those around them. This leads to a complex dynamic with young people in the QS identifying themselves as scugnizzi, i.e. aliens to the privileged society of Naples, with a type of alienation that is historically and culturally legitimate when compared to the one of the relatively newly arrived immigrants. The proximity between historically legitimate ‘others’ (the scugnizzi) and immigrant youth leads to growing ethno-racial violence and tension, making life in this peripheral neighbourhood more and more difficult. 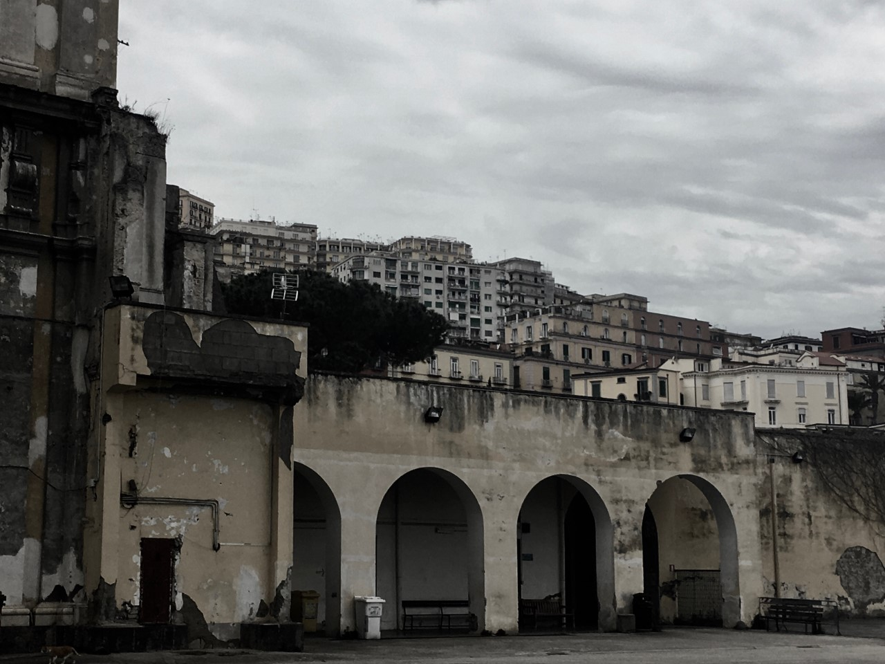 The QS may not be seen as the most ‘liveable’ neighbourhood in the city of Naples, but they represent the power of socio-economic development and cultural narratives to define lives in the new Global North. Neighbourhoods such as the one described in this article exist not only in Naples but across cities globally, and reflecting on the experiences of those inhabiting them should bring us to question the notions of Global North and Global South themselves. Unless we critically consider ways in which this terminology leads to the invisibility of these realities, where deep cultural and social marginalisation coexists with pockets of wealth and privilege, then we will not be able to fully understand the outbursts of violence and tensions that are proliferating in urban realities globally.

Opening up possibilities for the exploration of marginalised and silenced spaces in the global North is an opportunity to raise awareness about the ways in which normative conceptions of progress can lead to the disintegration of social life for the most disadvantaged, as well as violent encounters between different subaltern groups.  In the final frame of the movie La Haine (1), one of the main characters reflects on the practices of invisibility that shape the lives of the most marginalised in a society which in the name of progress ignores them through the rhetoric of ‘so far so good’, disregarding the disequilibriums, forms of structural violence, and cultural deprivation affecting those left at the margins. It is only through particularly violent outbreaks that these realities are made visible and recognisable to those that make them trivial and invisible. The aim for journalism and sociological research should be to make these realities visible and give them recognition before they implode.

Note:
(1) Kassovitz’ film La Haine (1995) follows three young men over a span of 24 hours in a French Banlieue, highlighting the violence, racial tensions, and marginalisation they face in their everyday existences.

Matias Nestore is a young researcher, working in the sociology of education, sustainability, and territorial inequalities. His experience and work combine research in urban and rural realities, both in the UK and Italy.  He holds an MPhil in Education, Globalisation and International Development from the University of Cambridge and is currently working in education research, and cooperation and sustainability in the Mediterranean region.

Image Credit: all the photos (except the headline image, taken by Matias Nestore) were taken by the children during a participatory photography walk