Being a ‘good’ refugee?: Reflections on a participatory media project in Kampala, Uganda

Images of refugees are used often in ways which are beyond their personal control and so this project wanted to turn the lens, but with unexpected results. Whether graphic photographs of the body of a young child lying lifeless on a beach, over-crowded boats, or lines of people penned in at country borders, representations of forced displacement have come to powerfully construct stereotyped, reductionist and essentialized impressions of ‘refugeedom’. These voiceless images have become ‘symbols’ of suffering occupying a dominant, but not universally ‘worthy’ position caught between institutionalized refugee-resettlement responses and humanitarian missions. The ways in which ‘emotionally appealing images of suffering are one of the core mechanisms, or technologies, of contemporary humanitarianism’ has been noted (Käpylä and Kennedy, 2014). This observation underscores a vital mediation between suffering in the context of refugee resettlement and the classification of refugees as ‘good’, those suitable for resettlement, and ‘bad’, those who do not fit the narrow, normative and potentially reductionist guidelines by which humanitarian missions allocate resources.

Turning the lens: The participatory media project
But my own, and the experiences of others who have worked with refugees, serves to show the complexity of a refugee’s identity– and trying to be seen as a ‘good’ one and so ‘suitable’ for resettlement.   In order to turn the direction of the lens, which has presented particular ‘public’, generic and ‘commodified’ versions of ‘refugeedom’, I have recently carried out a participatory media project with Congolese refugees attending English Skills classes in Kampala, Uganda. This project used photography to place the refugees behind the lens and collect their own images of daily living as a refugee or refugee family. But what became clear as the project progressed was the invidious impact of the refugee-aid-resettlement nexus on the students’ presentation of self and status as ‘refugees’. Rather than bring their prior and various experiences to bear, it exposed the students’ knowledge of normative, western expectations of the ‘good refugee’ and the associated resettlement system. To my surprise, the photographs produced by the students echoed images promoted in the United Nations High Commissioner for Refugees (UNHCR) resettlement handbook.

The UNHCR Resettlement Handbook serves as a guide to the process and prioritization of resettlement claims, and as a means of the UNHCR communicating to receiving countries that it maintains a thorough screening system of refugees prior to resettlement. In effect, the UNHCR ‘are in charge of determining the adequate threshold of suffering’ for those seeking resettlement (Sandvik, 2009). The dual function of the Handbook transforms politicized preconceptions of refugeedom from receiving countries into guidelines in the resettlement selection process on the ground. Visual representations of refugeedom in the Handbook therefore can have a potent impact on concepts of what a “good” refugee is, or should try to be. 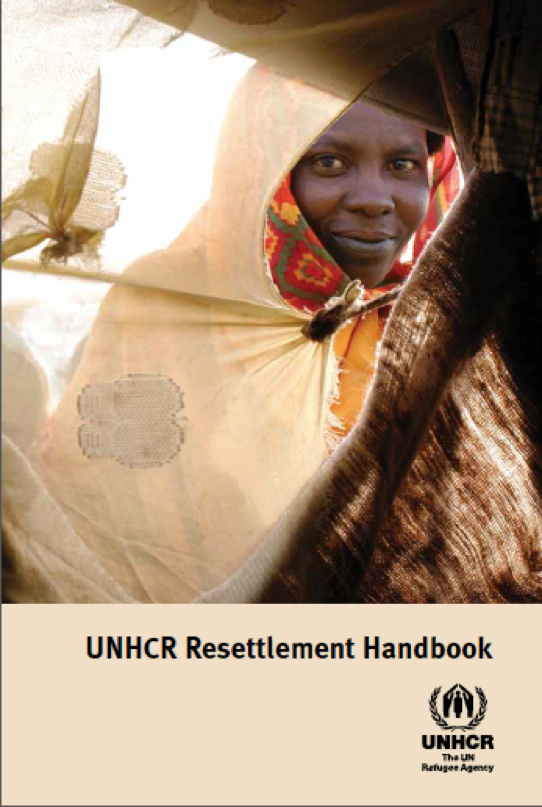 The friendly face of the woman in the photograph on the cover of the UNHCR Handbook is one of suffering and victimhood, yet in an overtly universal sense and indeed in a distinctly individual sense. Refugeedom is presented as plight of individuals, not complex multi-generational families with a diverse range of social backgrounds and interconnected experiences, both as individuals and as a collective. Such individualized representations can become universalized and so silence the narrative of the photographic subject. Refugees are denied their narrative authority in the context of their application for resettlement. Participatory projects – including my own – attempt to attenuate this gap between the diverse and complex reality experienced by refugees, and the ways they are represented. In a way such an approach can claim a greater degree of “authenticity”. Yet in the end, it was not the ‘authenticity’ of the photographs that gave insight, but the nature of their ‘inauthenticity’. The photographs taken in the project revealed the student’s knowledge of how they felt should present themselves and their family life in order to boost chances of resettlement success.

The classes in which the project was introduced and cameras distributed, took place in a wooden structure on a hillside in southern Kampala. This building was used for classes, as a church, and a home for families who had recently arrived from the Congo and had not yet found a place to live semi-permanently, or ideally temporarily, while their asylum claims in a third country are processed. However, some refugees had been waiting for more than a decade. My classes worked in collaboration with YARID (Young African Refugees for integral Development) and were conducted as part of their English classes which took place each morning for three hours. Most of the refugee students were frequently absent, often attending meeting with doctors, lawyers or bureaucrats, or otherwise occupied with various aspects of their resettlement applications. This no doubt hindered the smooth running of the project but also revealed the importance and dominance of the resettlement process in the lives of the students.

It is also important to note the ambivalence and even suspicion, with which the project’s aims were first met by the students. It was explained that the project aimed to collect photographs which could be incorporated into a section of the YARID website, in order to give the students a chance to represent themselves locally and internationally. This explanation was met with a number of questions regarding the exact function of this website. Notably, students were interested as to who was likely to be seeing the photographs and even whether the project would help their resettlement prospects in any direct way. The students’ seemed constantly concerned with how any activities may impact their resettlement applications.

One example of the students’ reluctance to reveal aspects of their daily lives through photographic images thought to be potentially detrimental to their resettlement applications, is demonstrated in the photographs taken by one student, ‘George’. In response to a request to take photographs of things he associated with his ‘identity’, George took three photographs accompanied by the captions: ‘my favourite food’, ‘hard work is important for me’ and ‘my friends are in my identity (See photos below).  Even though the students had been asked to take pictures of things they associated with their identity, George chose to take photos of images found in one of his English study books. When asked why he chose to take photos of western images from a textbook, George said he felt they represented his identity better than photos he could take of his own life, regardless of the fact he had never tasted the food in the picture he labeled “favourite food” and the substantial cultural distance between his life and the images of western life he ‘claimed’. 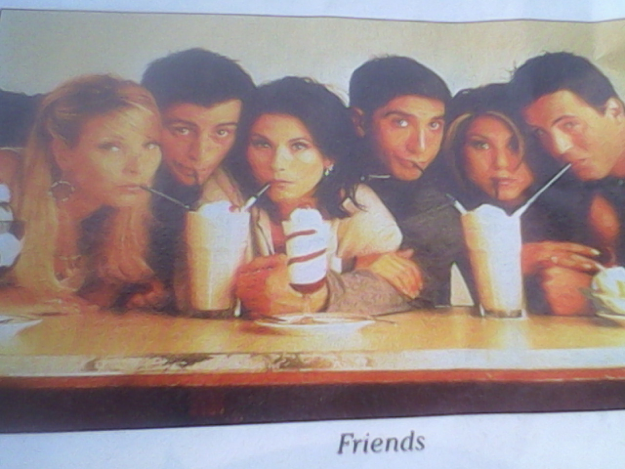 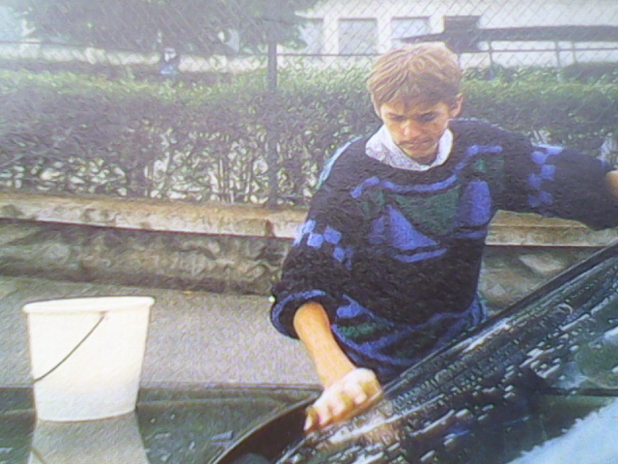 George had come from the Congo alone and had been in Kampala for more than a year. He shared one-room with another Congolese man and sang in the makeshift church at least twice every week. He was genuinely interested in gaining a qualification in photography as he hoped to become a graphic designer. He was reluctant to talk about the whereabouts of his family, perhaps feeling this may undermine his resettlement application in some way.

This was a small exploratory participatory project, aimed at democratizing representations of refugees who have been displaced by diverse circumstances of conflict, poverty and social circumstances.  Although the project revealed some of this diversity in the images produced, unexpectedly many of the photographs reinforced universalized images and stereotypes of the ‘good’ refugee, ripe for resettlement.  The lessons I take from the project relate to the ways in which practices of agency can be restricted by universal ideals of the ‘good’ refugee and how photo-elicitation approaches may not be as ‘democratizing’ as they may at first appear.

References:
Käpylä, J. and Kennedy, D. (2014). Cruel to Care? Investigating the Governance of Compassion in the Humanitarian Imaginary. International Theory , 6 (2), 255-292.
Sandvik, K. B. (2009). THe Physicality of Legal Consciousness: Suffering and the Production of Credibility in Refugee Resettlement. In R. A. Brown, Humanitarism and Suffering: The Mobilization of Empathy (pp. 223-244). New York: Cambridge University Press.

Amir Garmroudi has an MA in Media Practice for Development from Sussex University and currently works on various participatory media projects and action research projects with Shout Media, exploring the ways pluralist research methods can stimulate or encourage social change and social insight in a variety of social contexts. A version of this piece appeared in the Open Space section of the Families, Relationships and Societies, which offers a unique opportunity to consider facets of family lives, relationships and societies from unexpected and novel (non-academic) perspectives. The editors of the Open Space are Professor Esther Dermott (University of Bristol) and Professor Tina Miller (Oxford Brookes University).