On 19 August 2017, Kemi Seba, a Franco-Beninese Pan-Africanist activist living in Senegal since 2011 and leader of the NGO Urgences Panafricanistes (SOS Pan-Africa) burned a 5,000 CFA franc banknote (7,62 Euro), at a demonstration in the country’s capital city Dakar, as a symbolic act to denounce what many consider a colonial vestige still active in francophone Africa. Following a complaint filed by the Central Bank of West African States (BCEAO) on 25 August both Kemi Seba and Urgences Panafricanistes colleague Bentaleb Sow, were apprehended at seven in the morning by Senegal’s equivalent of the FBI, the Criminal Investigations Division for burning the banknote.

They were held in custody for five days in Dakar’s central prison Rebeuss – a prison Seba compared to a concentration camp – until they were eventually released on 29 August, also thanks to a hefty media campaign launched by sympathizers worldwide. As the topic went viral on social media sites that responded by uploading hundreds of photos of burning banknotes, cigars being lit with a CFA banknote or cooking pots full of CFA banknotes- the event re-opened a debate on a subject still considered taboo.

“I think it was a symbolic act much like that of Mandela burning his passport or Mohammed Ali refusing to go to war in Vietnam. It is a symbolic act to denounce how far the CFA franc destroys the lives of the peoples who share it”, says Senegalese activist Guy Marius Sagna commenting on the events on French radio FRI.

On 5 of September Seba was arrested again and the next day the Senegalese authorities expelled him to France stating Seba’s presence was considered a cause of public disorder, due to the numerous demonstrations his NGO Urgences Panafricanistes has held and is planning this year.

One week into Seba’s expulsion to France the Beninese authorities have been eerily silent on the events.

At its inception in 1939 the CFA stood for the French African Colonial franc – today the acronym stands for Franc of the French Community for the West African franc and Franc of the Financial Community in Africa for the Central African franc. Yet, as early as 1907 France had enforced the then French franc as the only legal tender, forcing the people living under its empire to abandon other local currencies as legal tender. Resistance to coercive centrally issued metal currencies was persistent in both the franc and sterling zones as recent historians are demonstrating, debunking the myth of a “monetary revolution” that simply replaced a local multi-centric economy into a unicentric system (1).

Unlike other colonial empires – the UK, with its sterling zone or Portugal’s escudo zone, whose respective currencies were faded out with independence, the CFA franc is an extension of the same monetary authority that governed former French colonies prior to their independence.

Its structural arrangement is based on four principles: a fixed rate of exchange with the euro  (and previously the French franc) set at 1 euro = 655.957 CFA francs; a French guarantee of an unlimited convertibility of CFA francs into euros; the centralization of foreign exchange reserves (since 2005, the two central banks – the Central Bank of West African States (BCEAO) and the Bank of Central African States (BEAC) – have been required to deposit 50% of their foreign exchange reserves in a French Treasury special ‘operating account’ (immediately following independence, this figure stood at 100% and from 1973 to 2005 at 65%). The fourth principle is free capital transfer within the Franc zone, which translates as capital flight to France.

Critics of the CFA franc point to its monetary orthodoxy that entails an anti-inflation bias, detrimental to growth and are calling for a “Franxit”, mimicking Greece’s proponents of a Grexit, the potential exit of Greece from the Eurozone, as a way of regaining necessary sovereignty over monetary policies. Beleaguered Greece, for instance, cannot print more money or lower its interest rates because it’s a member of a fixed-currency union, the eurozone. “If you like the euro and how it’s been working, you should love the gold standard,” said economist Barry Eichengreen, underlying how in 1933 President Franklin D. Roosevelt cut the dollar’s ties with gold, allowing the government to pump money into the economy and lower interest rates, as an efficient way to overcome the economic depression.

A strong currency is also not viable for countries mainly exporting raw materials, as the high price will lower the competitiveness of its exports on the market, thus a strong currency in the region mainly serves the élites, whose imports are indirectly subsidized. The EU monetary union is more viable as it also reflects trade patterns within the region, which is as high as 60%; this is not the case for the CFA region where intra-regional trade is as low as 10 to 12%. This is further complicated as the two CFA’s currencies are not inter-convertible. Another anomaly is that France holds a de facto veto power on the boards of the two regional central banks (BCEAO and BEAC) as well as a deliberative vote within the respective Monetary Policy Committees (MPCs) that decide the economic policy for the region:  French representatives in the MPC’s can vote whereas the WAMEU or CEMAC representative can only act in an advisory capacity.

The agreement that France will guarantee the CFA’s exchange rate is also a fallacious argument for three reasons: today France’s monetary policies are subject to the European Union approval thus depriving Africans of autonomous decision making in what Cameroonian economist Martial Ze Belinga calls a “double-locked coloniality” (2). In 1994, when France could have come to the Franc zones help, the currency was instead devalued by 50%. Considering the high amount of reserves kept in France (experts say its nearly 100% of the area’s foreign exchange reserves, although only 50% is legally required) it’s the regions own reserves and not the French treasury that already guarantees the CFA currency convertibility. Furthermore, such high deposits cause a severe liquidity crunch on the continent hindering much needed bank lending: “credit to GDP ration stands as low as 25 % for WAMEU and 13% for the CEMAC zone, but averages 60% + for Sub-Saharan Africa, and 100% for South Africa”, says economist and researcher for the Rosa Luxembourg foundation in Dakar, Ndongo Samba Sylla.

Former Togolese Minister of Planning and Public Policy Evaluation and currently Director of the Economic and Digital Francophonie (OIF), co-author of Sortir l’Afrique de la servitude monétaire, A qui profite le franc CFA? (Liberate Africa from monetary slavery, Who benefits from the CFA franc?) thinks that expelling Kemi Seba is the perfect illustration that the people who run this CFA currency do not want to open the debate on substantive issues. For him these African leaders are in what he calls “a voluntary servitude” in their acceptance of the franc CFA’s structural setup. But how voluntary is it?

Cameroonian anti-colonial resistance leader and the first Sub-Saharan to hold a PhD in economics, Osene Afanda, denounced the enslavement of African countries through the use of a currency over which they had no control and called for an African currency the “Afrika”. Afanda was beheaded in 1966 just as his PhD was being published; writing two decades later Afanda’s compatriot economist Joseph Tchundjang Pouemi, was poisoned in 1984 for writing Monnaie, servitude, liberté: la répression monétaire de l’Afrique (Money, Servitude and Freedom: the monetary repression of Africa). Countless other examples abound.

In post-independence Africa, France harshly sabotaged Ahmed Sékou Touré’s Guinea, who chose autonomy at independence rather than joining the new French community. When Togo’s first President Sylvanus Olympio decided to launch a national currency, he was assassinated in January 1963 by a French backed coup. A similar fate was reserved for the first President of Mali, Modibo Keita, who had created the Malian franc in 1962 but was the victim of a coup in 1968.  Thomas Sankara’s, Burkina Faso’s famous resistance leader spoke of the CFA monetary system as a weapon of French domination.  Sankara was assassinated in 1987. 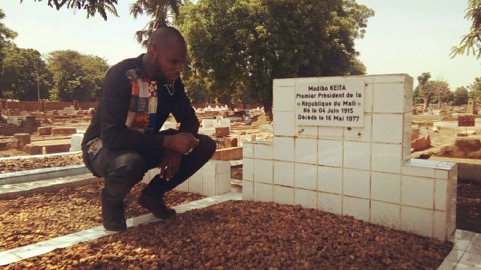 Two more recent examples: the Wikileaks Clinton files reveal that France’s support of the attack on Libya in 2011 was largely due to France’s fear of Muammar Gaddafi’s drive for an African Union with a single currency. Gaddafi’s 143 tons of gold, and a similar amount in silver was intended to be used to establish a pan-African currency based on the Libyan golden Dinar, a plan designed to provide the Francophone African Countries with an alternative to the French CFA franc.

Ivorian President Laurent Gbagbo, the father of the country’s democracy and a non-violent resistance leader, also a strong supporter of creating a new regional currency, was toppled by a UN-French coup d’état in April 2011 and deported to the International Criminal Court in The Hague. In February 2011, prior to the military intervention in Cote d’Ivoire, France ordered that all local branches of French banks (the American one’s followed suit) shut down from one day to the next, although they represented 50% of the country’s banking sector. A real bank resistance followed that saw 95% of the bank employees back the Gbagbo government’s decisions, defying the French instructions, and managing to reopen the accounts in three weeks (3).

As French mainstream media discredits Kemi Seba depicting him as a supremacist, rather than acknowledging the growing frustrations of African youth French President Emmanuel Macron and his Ivorian counterpart Alassane Ouattara on 31 August called for the extension of the CFA franc to include the English speaking countries of the Economic Community of West African States (ECOWAS). As a reaction to this stance Urgences Panafricanists have called for a worldwide mobilization on the 16 of September in over 30 cities to be held in Europe, Africa, the Caribbean as well as New Caledonia in the southwest Pacific Ocean.

One can only hope that African leaders in the future will be able to fight for independence without becoming martyrs.

Nicoletta Fagiolo, an Italian film-maker, worked for the United Nations High Commissioner for Refugees (UNHCR) till 2003. In 2004 she shot her first film on the impact of microcredit in Bangladesh, Fighting Financial Apartheid. In 2009 she shot and directed the 52 minute film Résistants du 9ème Art (Rebels of the 9th Art), a documentary film on African editorial cartooning and freedom of expression. She is currently developing a feature length documentary on two Pan Africanist non-violent resistance leaders, Simone and Laurent Gbagbo, the right to difference. Fagiolo works for national and international TV channels writing and producing reportage and documentaries.