Understanding the Diffusion of Low Carbon Systems: Lessons for Policy

In 1979, an Austrian sawmill owner installed the country’s first biomass district heating (BMDH) plant, delivering heat and hot water from a central boiler via a network of pipes to neighbouring properties. Twenty years later there were 500 schemes, and by the end of 2014 this had risen to 3,100. The country went from importing Swedish biomass boilers in the 1980s, to being a global leader in their manufacture. Now, BMDH provides 22% of space heating and hot water in Austria. How this happened is both impressive and fascinating, providing the opportunity to examine how low-carbon systems like district heating diffuse.

Reductions in energy demand are expected to contribute to more than half of the reductions in global CO2 emissions over the next few decades. As such, the diffusion of low-carbon systems like BMDH – which are more efficient than individual heating systems – will need to occur at a scale and rate that is historically unprecedented. Understanding how and why diffusion of an innovation occurs can, in theory, support the development of the right mix of public policies to support deployment. 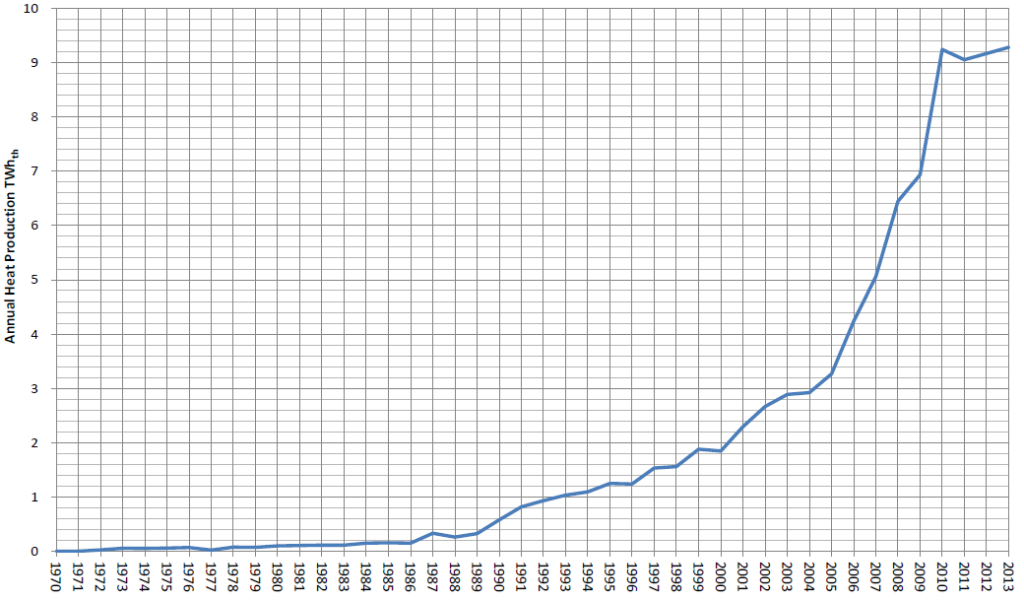 Why some technological innovations spread more quickly than others, or more rapidly in one country than another, has been studied for over half a century. Yet the diffusion of technological systems, as opposed to discrete products, has received relatively little attention.

Theoretical models dominating the innovation literature are not sufficient to explain the diffusion of low-carbon systems. These adoption models understand diffusion as the result of purchase decisions by consumers. But consumers are generally not intrinsically motivated by ‘low-carbon’ characteristics and most low-carbon technologies are more expensive and/or offer lower performance. Their diffusion therefore requires public policies (e.g. subsidies, taxes, infrastructure investments) and supportive discourses to create a sense of urgency or positive motivations.

Different adoption models emphasise different factors that shape adoption decisions, such as the flow of information, characteristics of the adopter (e.g. age, income level), attitudes towards the innovation, or economies of scale. Despite these differences, adoption models assume that diffusion of an innovation results from a rational calculation or is informed by adopters’ attitudes and beliefs. They also tend to assume that the adopter is the only actor in the diffusion process and that the environment in which diffusion takes place is fairly static.

While adoption models may explain the diffusion of discrete products, they face problems explaining the diffusion of systems. Systems differ from discrete products in terms of scale, complexity and capital intensity, as well as in spatial, social and political dimensions. System diffusion also involves a range of actors, such as policymakers, supply-side actors (e.g. installers, manufacturers) and civil society, in addition to adopters. Furthermore, because diffusion of technological systems takes years or decades rather than months or years, the environment the system diffuses into is neither static nor homogeneous but varies across space and time.

Given these limitations insights from three further approaches are necessary to understand system diffusion: upscaling (system building), replication and circulation, and societal embedding.

Low carbon system diffusion is best viewed as a multidimensional process viewed from the perspectives of models of adoption, upscaling, replication and circulation and societal embedding.

Key Findings from the Austrian Context

By examining the diffusion of BMDH in Austria over three decades we find:

Diffusion of low-carbon systems involves multiple interacting factors and actors, which span techno-economic, political, social and cultural dimensions. A general insight is that single policies are unlikely to result in the successful diffusion of a low energy system.

Based on our research we conclude with five key lessons for policy.