Viewpoint: An Old Story of Profit, Power and People – Why We Should Fight TTIP

A US president gets in cahoots with corporations and European Union technocrats to do a deal. They roll back regulations that protect food safety, public services and peoples’ rights, so rich bosses can get richer. Corporations are allowed to sue governments over social protections that get in the way of their profits. The deal’s done in secret. We know about it because of determined insiders who leak information and campaigners pursuing freedom of information. Literary agents will turn down this political conspiracy thriller for its implausible and crude story line. But it isn’t fiction. It’s what the Transatlantic Trade and Investment Partnership (TTIP) is about.

We don’t know how TTIP will end up because it’s being negotiated behind closed doors and is ongoing. But here’s how it looks now. Governments and corporations have been bypassing world trade talks to make bilateral treaties with other nations and blocs. TTIP is between two of the world’s biggest economies, the USA and EU. It’s not mostly about tariffs, they’re already low, but reducing regulation on international corporations’ investments. The intention is regulatory convergence between the EU and US. That means convergence downwards. Talks should be concluded in 2015. Unless stopped, they will constitutionalise neo-liberalism and put limits on regulations that are to protect people, in a treaty that will outlast and rule over governments.

National MPs aren’t involved and can’t see the papers. It’s not clear whether national parliaments will have the chance to ratify the treaty, and they and the European Parliament will probably only be able to say yes or no. 90% of over 500 consultations with stakeholders have been with business interests; few with civil society organisations.

TTIP includes Investor-State Dispute Settlement (ISDS) where overseas corporations can claim compensation from governments if regulations restrict profits. This will deter states from regulating in the first place. Once companies have invested, governments are expected to conform to corporate ‘expectations’, which means no new regulation. The defence is that corporations need to protect their investment. Reports are that EC president-elect Jean-Claude Juncker will drop ISDS from TTIP. However his own comments do not clearly suggest this is the plan and governments are saying ISDS should be kept in.

Legal actions will go through special adjudication courts, not normal legal processes, judged by corporate lawyers with an incentive to favour corporations so they can get more business in the future. There will be no right of appeal. States will pay costs even if they win. These average £5m a case. The justification for special courts is that in treaties with developing countries legal processes there are not sound enough. But the EU and USA are a different ball game. Investors will shop globally for treaties with favourable ISDS set-ups. Countries in the global south will feel they must deregulate to avoid corporate actions.

The Labour Party supports TTIP. But key commitments, to limit energy prices, repeal the Health and Social Care Act and raise the minimum wage, lay Ed Miliband open to actions for restricting corporations’ profits. Power company Vattenfall have sued Germany for phasing out nuclear power. European companies have taken action against the Egyptian government for wage protection, and Argentina for utility price caps. US companies have challenged Canada under NAFTA for restrictions on fracking, fuel additives and pharmaceuticals patenting. Some of TTIP’s defenders say it’s all OK apart from ISDS. But that’s quite a big qualification.

The treaty’s likely to open up public services further to overseas TNCs for profit, with state monopolies ruled out. There’s a provision for leaving public services out from the negotiations, but this may be done via a principle of excluding what’s been included, rather than positively choosing what to include. The UK government say the NHS won’t be part of it. But the NHS is so marketised it’s not clear it fits the definition of a public service, so could be kept in. The mixed provision of UK education will keep it in the sights of TTIP. Discussions of the agreement say it’s core functions that will be excluded. This usually means things like defence, police and the judiciary.

Reversing existing marketisations of public services could be blocked, by litigation for expropriation. Achmea has won €29.5m compensation from the Slovak government for restricting private insurance. They’re taking action to stop the Slovaks introducing a public insurance scheme. Where public services are outsourced to private providers, in health, education or elsewhere, it will be less easy to do what’s needed in such a situation; make sure you have good regulations on the new for-profit providers.

The argument for TTIP is that it will increase trade and investment so deliver wealth and jobs. Sadly, some critics oppose this on (supra)nationalist grounds that European jobs will go to the USA, or that trade treaties open doors to cheap migrant labour, as if Americans and Indians aren’t people too. But forecasts of economic benefits are on the basis that the range of what’s proposed for TTIP goes through, which is (hopefully) unlikely. The gains predicted aren’t huge. An optimistic estimate is that an EU family of four would gain €545 of disposable income a year. Hold the celebrations, because that’s not much more than a pound a day, split four ways. Enthusiasm for the economics must be based on something else. Maybe that’s profits for the shareholders.

Studies that support TTIP focus on economics. The assumption is that social and environmental protections are worth sacrificing for money. The USA has weaker labour rights, so converging downwards means worse protections for workers. It’s a long way from a social democratic culture for the people. Deregulation and economic gain are a default position; social concerns an obstacle.

Little GM food is sold in the EU and it must be labelled. The US are challenging labelling requirements, and American biotechs want to increase GM imports into Europe. US food producers want EU pesticide controls lowered. The EU restricts imports of beef treated with growth hormones because of a cancer link, but US government and businesses want this removed. The EU bans dipping meat in chlorine. US companies like KFC want the ban ended. Limits on chemicals that interfere with human hormone systems are more stringent in the EU. US industry groups want the controls removed. The precautionary principle where food safety is adhered to unless something can be shown to be safe, dominant in the EU, could be replaced by the US approach of following food practices unless science can show them to be problematic, and of regulating the product, but not the process of production.

Airlines 4 America want EU carbon charges on US airlines dropped. TTIP could allow exports from Canadian tar sands and US fracking. The argument is that environmental damage is outweighed by cheaper gas, which itself assumes corporate savings will be passed on to consumers rather than shareholders. US companies may challenge fracking bans in Europe. More trade will increase carbon emissions, with the transportation involved, undermining EU carbon-reduction commitments. And the aim of TTIP is to increase growth, production and consumption. These are the contradictions of being for economic growth and against climate change at the same time. 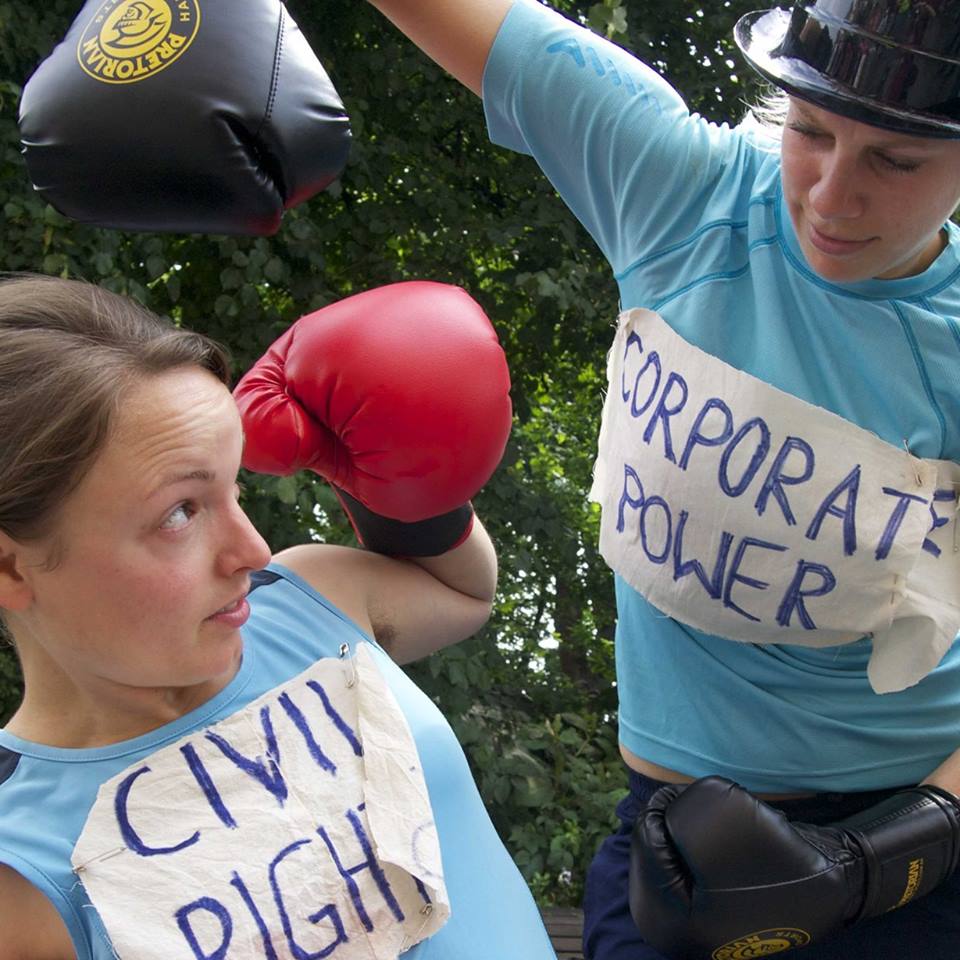 Negotiations are in process, so now’s the time to do something. A first question is who – who do we aim at? MPs are being kept out of the discussion and their role bypassed. Many don’t seem tuned in to what’s at stake, although some are. The Greens are on board. Labour, whose policies stand to be blocked, are not. The SNP support TTIP despite their social democracy. There may be room for change there. Citizens and consumers are unaware of many of the issues, and may be horrified to hear about the prospects for food safety. We should push for our very alert civil society organisations to be consulted.

Secondly, who with? This isn’t something we have to go out and do alone.  Organisations like the World Development Movement (WDM), War on Want, and trade unions are on the case. So if we want to organise action locally we can go to work with people like this. Thirdly, how? Given lack of concern or awareness about the issue, lobbying those with the potential to be concerned makes sense, and spreading knowledge is still key. You can do this with the sort of high-visibility performances the WDM have been carrying out.

And fourthly, what – what are the themes we should highlight? This is an old story of profit, power and people. It’s openly said that social protection should be sacrificed for money, and environment and health trumped by growth and profits. This means economic and corporate goals over human ends, and to institutionalise this over governments, including those elected in the future with objectives that go against TTIP. Corporate power is at the heart of it all. If we want to get more nitty gritty, we could question the economic gains and who will share in them.

TTIP is about how we measure benefits to humans, what quality of life is about, and who has power. It’s also a chance to think about the alternative. We can criticise, and on the basis of that start to think about alternative political agreements, and societies better for humans.

Luke Martell is Professor of Political Sociology at the University of Sussex, UK.