Getting the nation to talk about sex

The end of November 2013 saw the launch of the latest results from the third National Survey of Sexual Attitudes and Lifestyles (Natsal-3), accompanied by much media hype – from the broadsheets to the tabloids, everyone wanted to know who was doing what with whom. The survey is the third in a series that started in 1990, and for the first time we spoke to people up to the age of 74, enabling us to look back over around 60 years of sexual experience to track the sex lives of those born in the 1930s through to the 1990s.

The findings make for fascinating reading. Older people are defying stereotypes and continuing to have sex well into later life. 42 per cent of women and 60 per cent of men aged 65-74 reported having had a least one opposite sex partner over the past year – You don’t see a tremendous amount of that on the telly either. In contrast, one thing that may be a surprise, particularly in a society that many see as increasingly sexualised, is that we actually are having sex less overall. People report having sex just under five times a month compared with over six times a month in the previous survey.

Perhaps the most striking changes are among women; who report having many more sexual partners and same-sex experiences, than in the past. Women aged 16-44 say they have had double the number of sexual partners than when we first undertook the survey at the beginning of the 1990s. In addition, four times as many women (almost 16%) say that they have had some kind of relationship with a same-sex partner. (By contrast, the percentage of men having same-sex partners has increased only slightly and is significantly lower at six per cent). This is particularly interesting data for social scientists to dissect. In all three surveys, men reported a higher number of sexual partners, but the gap between men and women is closing. 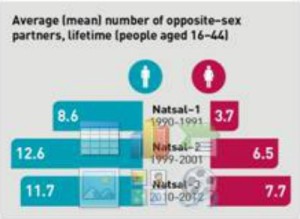 This begs the question: are we more open-minded or just more open to talking about our sex lives? What’s more, when asking people about such a personal aspect of their lives, how do we know that any of the survey’s findings represent the ‘truth’ about sex?

Many other surveys of sexual behaviour, including the Kinsey studies, rely on self-selecting volunteer samples. It’s known that such studies over-represent people who are more sexually active. In contrast, one of the things that sets Natsal apart from other sex surveys is that we use probability sampling methods to select a representative sample of the general population. For the latest survey, we selected almost 60,000 addresses from the Postcodes

Address File (a list of all residential addresses in Britain). 491 highly trained interviewers from NatCen Social Research then visited each address to ascertain how many people in the eligible age range (16-74) were living there. They then selected one eligible person using a random selection grid and invited that person to take part in an interview.

As with any other survey, we are reliant on self-reported data. With sexual behaviour research there’s a risk that people won’t answer accurately, particularly to questions about behaviours that they perceive to be socially undesirable. Since the survey was first conceived, one of our greatest challenges for us as researchers has been to find a way to ask people about their sex lives that uses language they feel comfortable with, is clear and easy to understand, and doesn’t give the impression of any social judgement.

In everyday life we talk about sex in euphemisms. ‘Doing it’, ‘having it off’, ‘sleeping with someone’, and many more from the vulgar to the downright confusing. But survey questions need to be clear and specific, with no room for misinterpretation. We need to be able to ask the same question to a 16 year old and a 74 year old, and for them to understand it in the same way.

In the late 1980s researchers from NatCen Social Research (then Social and Community Planning Research) carried out qualitative interviews with members of the public to see whether it was possible to find a common language that could be used to ask people about sex. The results were published as the report ‘Talking about sex’ by Spencer et al (1988) which is a fascinating read. They found great variation in the terms people used themselves and in how people understood different words. There was overwhelming agreement that people would feel uncomfortable if the researchers were to use slang terms, but words that sounded cold and clinical were also off-putting and could be misunderstood. One thing was clear: the broad range of meanings assigned to sexual terms meant that if we were to ask people about sex we’d need to define exactly what we meant.

Question wording has been kept consistent over time so that we can compare the data obtained from the three surveys, but with new topic areas have come new challenges to find the right words to ask people about their experiences. New questions have been developed using cognitive testing, and two new measures (one to measure unplanned pregnancy, the other to measure sexual function) have been created and validated.

The methods used have also adapted with the times – we now use computer-assisted interviewing, rather than paper questionnaires – but the basic approach remains the same, which is to create an interview environment in which people can answer honestly and accurately.

We make sure the interview is carried out in a private setting, and explain that the study is entirely confidential. The more personal questions are self-completion, so participants are given a laptop to read the questions and type in the answers themselves without having to disclose their responses to the interviewer. From our qualitative work we know that the fact the survey is for medical research and the results are used to help plan services and inform policy makes people more willing to tell the truth – once they agree to take part in the research, there seems no point in giving inaccurate answers.

Participants are always made aware that they can choose not to answer any questions they don’t want to. We actually find that very few people refuse to answer even the most sensitive questions about sex: less than 3%. Interestingly, however, where we do run into trouble is when we ask people about their income: around 20% refuse to answer this question. So it seems that people are more comfortable telling us about their sex lives than about their finances.

In spite of all of these efforts, we have to acknowledge that some of our data are likely to be subject to some reporting inaccuracies. Even if people are willing to answer honestly, we are all human, and subject to social influences which can create often unconscious biases. Although there are statistical explanations for the high number of sexual partners men report, at least part of the explanation lies in gender differences in answering the question: where people don’t know the exact number of partners they have had, men tend to round up and women tend to round down. It’s important therefore that we ask whether some of the changes we’ve observed over the course of the three surveys are due to changes in the social acceptability of being open about sex? If so, might this affect men and women differently?

To some extent we can look at this by comparing data for the ‘common birth cohort’ – that is, people who would have been in the eligible age group for more than one survey – to see how willingness to report sexual behaviour has changed over time. So for example, people born between 1956 and 1983 would have been eligible to take part in both Natsal-2 and Natsal-3. We can’t compare their answers about recent behaviours as we’d expect that to change – they would be ten years older in Natsal-3 and we know that sexual behaviour changes as we grow older.

However, we can compare their answers about one-off events that happened before the first survey, like how old they were when they first had sex. If we’re looking at the same population at two different time points, we’d expect their answers about something that happened before the first survey to stay unchanged, as there shouldn’t have been any real changes in this one-off event. If we do see differences it suggests either a change in the underlying population, or a change in willingness to report.

We’ve now done this analysis twice: first comparing Natsal-1 and -2, and secondly comparing Natsal-2 and -3. We found some evidence for a change in willingness to report between the first two surveys – the common birth cohort were more likely to report heterosexual sex before 16 and same-sex sex before 1990 in the second survey than the first. This was consistent with findings of more accepting attitudes to same-sex sex in general in the second survey.

This suggests that some of the change we saw between Natsal-1 and -2 was due to an improvement in the accuracy of reporting sexual behaviours. However, between Natsal-2 and -3 we see no evidence for a change in reporting bias for men. For women some modest differences were seen, although not in the direction we might expect if we assume that attitudes towards sex have become more liberal. We did find changes in the ethnic origin of participants in the second and third surveys consistent with real changes to the population due to immigration and emigration between 2000 and 2010, however our findings remained unchanged when we adjusted for ethnicity. Overall, we found little evidence for a change in bias between Natsal-2 and -3, suggesting that any changes in the reporting of sexual behaviours between these surveys are due to real changes in the population.

Although conducting robust research on sexual behaviour is challenging, we are confident that our data paint an accurate picture of the sex lives of people in Britain. We are of course indebted to our team of hard-working interviewers and to the many people who have participated in the surveys for making this possible.

Soazig Clifton is a Senior Researcher at NatCen Social Research, and an honorary Research Associate at UCL. All three surveys have been collaboration between NatCen, UCL, and the London School of Hygiene and Tropical Medicine. For the history of Natsal, see the Wellcome Witness seminar.