Under the surface: Covid-19 and the tiered British domestic work industry

People doing precarious work in a variety of industries are grappling with many similar issues due to lack of an immediate income under current lockdown conditions. But on digging deeper, race, ethnicity, gender and citizenship status are differently impacting the lives of individual workers. The UK’s domestic work industry includes both local workers, white and non-white British citizens, who often provide live-out cleaning services and should have access to state welfare provisions when needed, and migrant domestic workers, a significant proportion of whom come from the Global South and live in with their employers, and whose work and access to support is markedly shaped by racism.

In ‘normal’ times, domestic cleaning is claimed to be among the more resilient industries. It is ‘recession-proof’, as caring and cleaning are fundamental to the functioning of societies, old and modern. Although having a ‘servant’ became an archaic notion by the mid-twentieth century in Britain, live-out domestic cleaning never became obsolete, and since the 1970s, this occupation has been steadily expanding. A similar picture is evident across Western Europe including the Scandinavian countries. Today, cleaning service-providers have a range of clients from the obviously affluent to school-teachers, nurses and people in their own social circles. Live-in domestic work is also thriving, and currently in the UK, over 19,000 workers are on overseas domestic work visas. But – in a moment – a virus has changed all that.

At the time of writing in the lockdown, the cleaning industry is not deemed ‘critical’ in the UK. The British Cleaning Council (BCC) has called on employers and the government to rectify this. Cleanliness of environments such as hospitals is a vital part of the preventive measures against spread of Covid-19. Thus the BCC states that cleaners in critical industries should be treated as any other ‘key workers’.

Domestic cleaning too could be considered necessary for some people, e.g. those with certain physical or learning disabilities, or older people living alone. According to government guidelines, ‘tradespeople carrying out repairs and maintenance [to private homes], can continue, provided that the tradesperson is well and has no symptoms’, and ensures keeping a two-metre distance from the occupants of the dwelling. For self-isolating households only ‘emergency plumbing or repairs’ are permitted. This grey advice created a conundrum for many people in the early days of the pandemic in the UK: Is your cleaner still coming? Can I still work? Are you taking a risk? The Domestic Cleaning Alliance (DCA) issued fresh guidelines for cleaning certain points around the house, those that are touched more frequently.  But they also advised that people needed to make their own decisions about whether to continue. As the lockdown progressed, many domestic cleaning service-providers saw their work stop. Some are giving free cleaning advice to pre-Covid clients. In contrast, many live-in domestic workers – in particular migrants – are now experiencing even worse exploitation than before.

Migrant domestic workers even in ‘normal’ times often experience appalling work conditions and are the only group who cannot apply for settled status, which has had dire implications for some workers under the current lockdown. Many have been told pack their bags and leave at short notice, on the pretext that they have Covid-19 symptoms. because UK regulations only require employers to ‘provide domestic workers with a written statement of working terms and conditions within two months of starting work, and this is not necessarily a written contract’. The previous, renewable one-year visa where they could apply for indefinite leave to remain, gave them more security if employers suddenly terminated the contract.

The current six-month visa (since April 2012) ties the worker to their employer like a bonded labourer. If the worker manages to leave, they have to convince the National Referral Mechanism (NRM) that they have been trafficked. It takes up to two years before she is deemed a ‘victim of trafficking’. After that she can apply for a year’s visa, but still remains tied and dependent on her employer for further renewal. Marissa Begonia from The Voice of Domestic Workers told us: ‘The NRM route is so complicated that many of them don’t apply and end up becoming undocumented … do we need to be beaten and starved before we have any justice or protection?’ 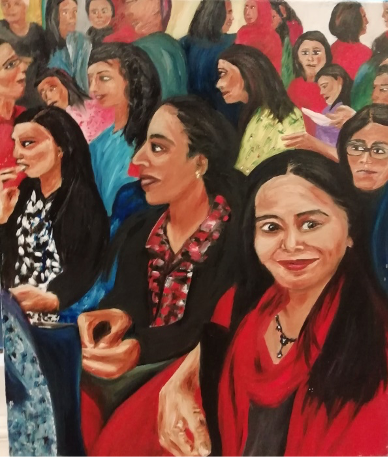 Domestic work visas are also not covered by laws regulating labour rights and race or gender equality, nor can migrant domestic workers access healthcare  or public funds. As for now, Sara (pseudonym) from Jharkhand, India, said, ‘Under this lockdown my workload has gone up drastically. I am expected to do so much more with everybody at home all day.’ Besides increases in workloads, there has been an intensification of racial and sexual abuse, which is also confirmed by the increase in domestic violence cases more generally. Some domestic workers are being forced to care for employers with Covid-19, without any personal protection equipment (PPE). The restrictions of the six-month visa means that they cannot leave because besides not having access to public funds, they also face the threat of deportation. Others, anxious about visas running out, no shelter, no money and the plight of dependent families back home are also being pushed into further exploitative situations. A few like Shruti (pseudonym)who can claim benefits are unable to because of lack of internet access.

More generally too, the recommended changes to cleaning routines might be needed even when the lockdown lifts, which has implications for agreed hours of work. Either other cleaning work will need to be reduced or the extra work paid for accordingly. Service-providers may also need to invest in measures for improving their own safety at work. Some clients may be permanently lost or they may push for tighter negotiations around hours required for cleaning  – many pre-Covid service-users have also suffered financially, or might continue working more from home. Moreover, notes the DCA director, Stephen Munton, relationships might require re-negotiation as people develop or re-remember their own cleaning routines, which are not necessarily the best ones for doing cleaning as paid work. There are many differences between unpaid and paid housework – it is not simply the case of replacing one worker with another.

A few clients of live-out service-providers are continuing to pay them in full or in part. These decisions are being made based on people’s own salary/financial conditions and whether they want to retain a cleaning service-provider. Others have stopped paying, similarly to music lessons or mobile hairdressing. Will cleaning service-providers benefit from the government’s emergency income schemes? Cleaning-agency employees are dependent on their agency’s situation. Independent cleaners who work cash-in-hand will certainly miss out, as will those who are registered traders but may not have filled a tax return because they did not earn enough. Focus on Labour Exploitation (FLEX) notes that such workers ‘may have no choice but to continue to go to work whenever possible’, often in the high-risk sectors where demand is currently high, at the risk of further exploitation.

FLEX are demanding mandatory provision of PPE and health and safety labour inspections for all workers who do not qualify for the emergency schemes or may be at risk of harm, statutory sick pay, end of the five-week delay in receiving universal credit, suspension of ‘no recourse to public funds’, NHS fees and immigration status enforcement, and emergency funding for support for all such vulnerable workers. The Voice of Domestic Workers is in the process of organising for the right to a renewable visa and for the right to citizenship. They are also demanding that the UK government should ratify the 2011 International Labour Organization convention on domestic work (C189) and have set up a fundraising appeal for migrant domestic workers facing hardships under the lockdown.

The situation of the domestic cleaning sector and the migrant domestic workers exposes the systemic weaknesses in providing for some of the most vulnerable workers. It also gives clues on how progressives, trade unionists, industry-specific organisations and women’s groups can support domestic workers in the post-lockdown ‘new normal’.  Thus, once the virus that ‘does not discriminate’ has spent itself, it remains to be seen if we will take that learning forwards to emerge as a more just society that values all work equally and that does not discriminate against or divides workers.

Lotika Singha is Honorary Research Fellow, Faculty of Arts, Business and Social Sciences at the University of Wolverhampton and a member of the UKRI-funded ‘Keep Talking’ community research project at Staffordshire University. Sarbjit Johal is an artist producing artworks on the struggles of Black and migrant women. As a member of the UK-based South Asia Solidarity Group, Sarbjit campaigns for the rights of migrant domestic workers.