The Unbearable Whiteness of the Holberg Prize

Every year, the Holberg Prize – an award established by the Norwegian Ministry of Education and Research and administered by the University of Bergen – is given to a scholar who is deemed to have made particularly important contributions in the social sciences, the humanities, theology, or law. International media took note when, on 14 March, the winner of this year’s prize, worth £430,000, was announced: the British professor of philosophy Onora O’Neill, who has been a notable presence in the fields of political and moral philosophy for a long time.

The point I want to make in what follows is not the kind of criticism that Jon Elster brought to bear in 2013, when he argued that the Holberg Prize should be discontinued as it had proven itself clueless and irrelevant by awarding the prize to Bruno Latour. Whether or not one subscribes to Onora O’Neill’s lines of argument, one would be hard put not to acknowledge the fact that she is a philosophical heavyweight. However, it is absolutely necessary to have a frank discussion of what the awarding of the prize to O’Neill is symptomatic of – that is, the unbearable whiteness of the Holberg Prize. 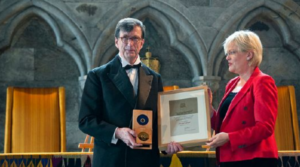 As noted above, the purpose of the Holberg Prize is to acknowledge and reward “outstanding contributions to research in the arts and humanities, social science, law or theology, either within one of these fields or through interdisciplinary work”. Bearing this in mind, let us take into consideration the fact that since 2004, when the first award was announced, 14 of 14 possible laureates have been white and western (the laureates are also overwhelmingly male – four women and ten men have won the prize since 2005). What is unbearable about this is the subtext that is communicated through the systematic whiteness and westernness – namely that research that is carried out in the global South, or by academics with a minority background in the global North, is evidently not seen as being significant enough to register on the prestigious radar of the Holberg Committee.

This scenario is obviously nothing short of absurd. Despite the subtext that is communicated by the history of the Holberg Prize, scholars like Partha Chatterjee, Wang Hui, Sylvia Winter, Achille Mbembe, Gayatri Spivak, and Mahmood Mamdani do in fact exist. It would be very difficult indeed not to acknowledge the fact that their work has defined new and pathbreaking understandings of the politics and the history of the postcolonial world – and given that this is so often forgotten, it might be timely to remind ourselves that the postcolonial world is also the majority world. Moreover, it is also key to bear in mind the crucial intellectual contributions of minority scholars in the global North, who have operated on the very frontlines of the social sciences and humanities for decades – for example Amartya Sen, Paul Gilroy, Angela Davis, Sheila Jasanoff, Patricia Hill Collins, Seyla Benhabib, and Hamid Dabashi.

Yet despite this, during its fourteen years of existence, the Holberg Prize has not deemed a single one of these intellectual pioneers to be worthy of one of their sought-after prizes.

Last week, I tried to confront the Holberg Prize with its unbearable whiteness on Twitter. I asked when we might have a laureate from south of the Equator. Typically, the response came in the form of a reference to formalities: “We gladly accept good nominees, deadline 15.06,” their social media administrator wrote. “These will be assessed by an international committee before the board decides on a winner” (1).

This response does not help matters much. It is of course very possible that the Holberg Prize has not, over a fourteen-year period, received nominations of non-western candidates – in fact, there is much in the maps that they have published online to suggest precisely this. If this is the case, then the fact of the matter is that the Holberg Prize simultaneously reflects and – by virtue of its considerable expertise – reinforces an academic Eurocentrism that marginalizes and disqualifies work that is carried out in the global South. It goes without saying that an award of this calibre should address the seriousness of such a situation rather than attempt to sweep it under the carpet with references to the formalities of the nomination process.

Due to the strict confidentiality that surrounds the prize and the nomination process – even the shortlist is not revealed to the public – we know far less about the extent to which minority academics from the global North are represented in the nomination process. This means that there are two possible scenarios: either minority candidates are simply not nominated for the prize, or the Holberg Committee has not deemed a single minority scholar worthy of a prize during the course of the past 14 years.

The first scenario is problematic for very similar reasons as the lack of nominations of non-western candidates. The second scenario is problematic due to the simple fact that the cutting edge of research on questions related to, for example, migration, ethnic relations, and racism have been defined, for a number of years, precisely by minority scholars. And the intellectual progress that these scholars have made in doing so has hardly ever been more relevant in relation to societal challenges than what it is today.

At the end of the day, I cannot claim to be surprised by the unbearable whiteness of the Holberg prize, and the role that the prize plays in the reproduction of Eurocentric structures of power in academia. After all, until recently I worked in a discipline – sociology – where it is completely normal for theory textbooks to be almost entirely dedicated to reiterating the work of dead (or almost dead) white men. And the vast majority of my sociological peers seemed to find this to be entirely unproblematic. In other words, I’m used to this scenario. The real question, however, is whether the Holberg Prize itself wants to be complicit in the reproduction of discriminatory academic and intellectual power structures across time. One would certainly hope not.

Reference
(1) My translation from the original Norwegian.

Alf Gunvald Nilsen, Department of Global Development Studies and Planning, University of Agder. This is a translated and lightly revised version of a comment published on the Norwegian website På Høyden.