Even before COVID-19, our online digital lives were marked by a routine, automated form of consent.  New webpage, pop-up box, tracking cookies: “I agree”.   Consent seems to matter like never before, but we are often caught between agreeing on the spot or losing out on the service we are trying to access.  When COVID-19 happened, the public health agencies seemed to make no attempt to seek our agreement, even in an automated way.  There was no ‘BREXIT’ style vote, little polling and not much political debate.

Regulations quickly disrupted all the ‘normal’ patterns of society, especially face coverings and lockdowns.  The daily shopping trip was tipped upside down.  We went from being welcomed into the brightly lit and friendly commercial space and valued as a consenting consumer to waiting in long queues, using disinfectant with in-store marketing warning us to not bulk buy essential items.  As more spaces opened up, we were increasingly required to take on more responsibility, including signing waivers giving consent before we could return to our social roles.  It is little surprise that #Idonotconsent began trending during COVID.  But what were they not consenting to? And why did they think it mattered?

#Idonotconsent was first used on Facebook in 2011 in a post against police power and New York’s policy of ‘stop-question-and-frisk’.  The policy targeted African Americans and a crucial part of the protest activity was to let people know about their legal rights, including consent during police frisking.  But by 2019 the hashtag was more widely used as part of anti-vaccination posts on Instagram.   At the time, Instagram was moving to stop the use of hashtags with highly dubious medical claims (#vaccinescauseAIDS, #vaccineskill and #vaccinescauseautism).  Anti-vaxxers then started using general tags such as #learntherisk and #justasking.  By 2020, Instagram had over 22,454 posts using #Idonotconsent, often tied to the idea of liberty and choice.  What had started as a hashtag related to police power had become a tagline for ‘anti-vaxxers’ and conspiracy groups.

In May 2020, we started scraping twitter for the hashtag, ending up with a sample of 7,687 tweets by June.  Using network diagrams as questioning lenses (Joel-Edgar, Holme, and Aramo-Immonen, 2020), we asked questions about why people were tweeting, what role was played  by validated accounts  and how information was being shared.

Most tweets related to the United States of America and consent (28.02%) either by using a version of the hashtag on its own or about the most popular tweet in our sample,

“I will NOT be masked, tested, tracked, poisoned or chipped to support this orchestrated LIE!

This is NOT my “new normal”

Written by ‘Braveheart’ (an account that uses the film’s title and an image of Mel Gibson) the negative attitude is clear; the government cannot take away their freedom.  But it seems almost childlike.  There is no argument, no evidence, just refusal.  What exists is a simple statement, packaged with a Hollywood image of an Australian playing an inaccurate rendition of a Scottish historical figure (William Wallace).  As qualitative researchers, we are #ConfusedFace!

“This pretty much confirms that Bill Gates is directing UK health policy. Boris is a Globalist puppet. Most or all of the £8billion BJ refers to will work its way through the vaccine #MoneyGoRound and end up in Gates’ pocket. It’s embezzlement and health Fascism all in one.” 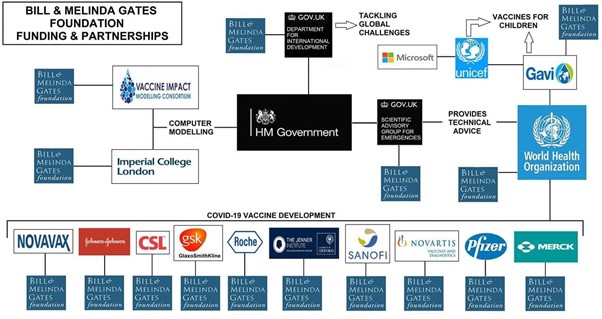 Hashtag messages can reach out past “community lines” (Isa and Himelboim, 2018; Tremayne, 2014) and tweeters sought to achieve this by retweeting with the message “Lets get this trending”.  However, it was only retweeted 77 times, quoted 10 times and liked 86 times, indicating the niche nature of these communities.

People were experiencing change and restrictions from this pandemic and are looking for a community to stand with them and to share their fear and concerns.  The network diagram shows one large cluster around the main  tweet  (coded in pink for twitter) and much smaller clusters around topics like knowledge systems (orange), government power and the economy (light green), masks (blue), conspiracies such as 5G and geoengineering (dark green).  There are also two very small edges related to vaccination (black). 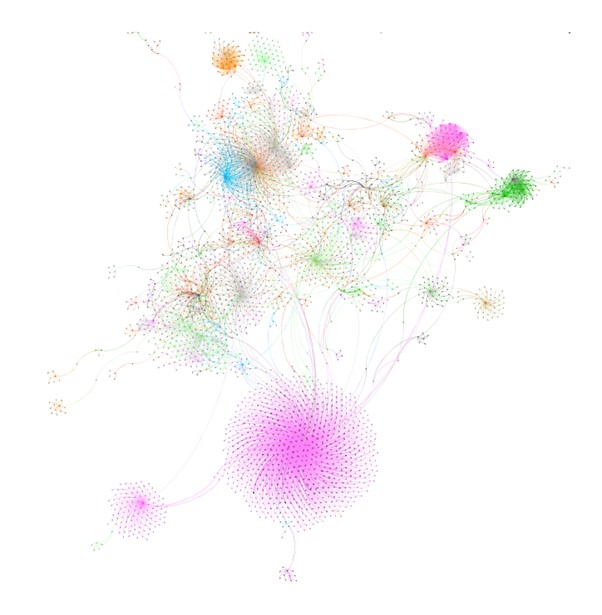 The network is mostly produced by tweets replying to others (1246 replies, 1120 mentions, 1234 mentions in retweet) or in 3332 retweets (3322 times).  For example, the hashtag was used to reply to Alan Dershowitz (previous Professor of Harvard Law) who on the22nd of May tweeted a newsmax.com link about vaccines (with over 15K replies).

Nor were all the more dubious ideas related to right-wing accounts.  Many conspiracy related posts referred to the ‘mysterious’ murder of JFK (John F. Kennedy, the 35th president of the United States:).  Jan-Willem van Prooijen et al have shown how participants’ belief in simple political solutions to societal problems facilitates conspiracy beliefs on both the left- and right.  Political extremism and conspiracy beliefs are strongly associated due to a highly structured thinking style that is aimed at making sense of societal events. However, for this hashtag, the left-wing connection was also scaffolded by selective quotes from JFK, for example “Conformity is that jailer of freedom and the enemy of growth“ (Kennedy, 1961).  Robert F. Kennedy, his nephew, has also taken a vocal anti-vaccination stance.

Verified accounts (accounts which are given a blue tick by Twitter as a sign they are authentic accounts of public interest) were mentioned, but not central to the scale of the network.  The eigenvector centrality, which is a measure of the influence of a node in a network, shows that a very popular verified account like @realdonaldtrump was only the third-highest in this network (with a score of 0.109).  Although interesting 33 profiles used ‘Trump’ in their handle, and these were core to mentioning and retweeting.  While tweeters did mention or reply to validated accounts, these accounts didn’t, in general, respond.  This suggests that the authors were trying to ‘get the message to’ those in power, but with limited effect.  One cluster was formed with 491 tweets connected to two users, @realdonaldtrump and @govrondesantis in a debate about police power, returning the hashtag to its original domain.

ARRESTED FOR NOT WEARING MASK BY SAME COPS WHO STOOD BY AND ALLOWED RIOTING AND LOOTING. RETWEET #NoMasks #IDoNotConsent #Hypocrisy #ConstitutionOverCoronavirus @realDonaldTrump @GovRonDeSantis #Florida [with a video with #jesusmatters] retweeted 269 times, 78 quoted, and 362 likes.

The overwhelming finding of this small project has been just how much work goes into tweeting, mentioning and retweeting this type of material.  Often the tweet threads jumped across different conspiracy domains, and many of the digital images are amazing in terms of their high-quality productions.  Many tweeters’ activities put work into getting the hashtag trending.  Yes, some posts are aimed at harm and violence to groups of people, but the vast majority were aimed at ‘waking up’ others.  This suggests sociological similarities to the lone man standing with his loudspeaker trying to bring the Gospel and save souls.

Now that our beloved commercial spaces are opening up, we find ourselves required to sit outside cafes and restaurants, in low-end spaces which for the last decade have been populated by smokers.  Public health response to COVID-19 shares marked similarities with the WHO Framework Convention on Tobacco Control (WHO FCTC), the first treaty negotiated under the auspices of the World Health Organization. Smokers ended up in these stigmatised outer geographies because public health actors were using social marketing to change smoking-related social norms (The IT Crowd – S2E3- Smoking on the job).  Now that we have to sit in these spaces, it is little wonder that consuming food and drink is less pleasing. Most countries are seeing growing protests against such regulations, echoing the calls we saw against the NWO (the New World Order).

Considering how frequently we use the Matrix film (a trope used in this hashtag) in our teaching, maybe we should be sympathetic?   Clearly, many in the general public are struggling to understand policymaking during the strange time of COVID-19, and it is understandable that the social contract is being questioned.  What is so fascinating about #Idonotconsent is the seeming idea that we’ve consented to any of the social structures and contracts so far.  This at least in part stems from sociology’s semi-injection into everyday society, producing half-understood notions of structure and agency, evidenced in the twitter hashtag.  Maybe we need to get better at teaching basic sociology and social theory.

Cassie Pressnall is interested in social networks which she explored in her thesis “’I will NOT be masked, tested, tracked, poisoned or chipped to support this orchestrated LIE!’: A Case Study of #Idonotconsent”.  She recently completed her MSc in Social Data Analytics University College Dublin building on her BSc. in Mathematics from Boise State University. Her research interests include social issues, politics, criminology, and the use of social media. Ingrid Holme is a medical sociologist who has spent over 15 years working in Irish and UK health/medical settings (Social Marketing, Public Health, Genetics, Eating Disorders). She holds a BSc Biotechnology from the University of Leeds, an MSc in Science and Technology Studies from Amsterdam University, and a PhD in Sociology from Egenis at Exeter University. Her research interests concern how people use information and knowledge, from understandings of genetics to ideas of belonging [email. Sian Joel-Edgar is a lecturer at Aston University, researching business visualisations. Previously she has worked in the Innovation and Service Research group at Exeter University Business School, and as a Research Fellow at the Tampere University of Technology, Pori, Finland. Sian’s research interests are Social Network Analysis, business visualisations to support decision-making and innovation, and requirements capturing for software design.