WELFARE MYTHS AND THEIR CONSEQUENCES

Britain’s welfare state now accounts for two-thirds of all government spending – £489 billion in 2014-15. This proportion continues to grow as the population ages, and as successive governments have chosen to increase spending on the ‘big ticket’ items (healthcare, schools and pensions) in good times, and to protect them in bad times. How it operates, for whom, and how it evolves are probably the most important questions in British politics.

A visitor to Britain learning about our society and the problems facing us from newspapers and television might think that the issues are straightforward. A hard-pressed majority, whose living standards have been squeezed ever tighter since the start of the crisis, is paying higher and higher taxes to fund hand-outs – ‘welfare’ – to a minority living long term on benefits, people who have often never worked, and have no intention of doing so. That is, apart from the ones who really are working cash-in-hand, while still claiming.

It’s skivers against strivers; dishonest scroungers against honest taxpayers; families where three generations have never worked against hard-working families; people with their curtains still drawn mid-morning against alarm-clock Britain; ‘Benefits Street’ against the rest of the country; undeserving and deserving. It’s them against us. We are always in work, pay our taxes and get nothing from the state. They are a welfare-dependent underclass, pay nothing to the taxman, and get everything from the state. If only we could get them to work through ever-more stringent conditions on getting benefits and through cutting back the value of what people who get them are allowed, we’d fix the public finances and get the economy moving at the same time.

A first set of myths is around where we spend the money. In a 2012 survey, people were first told that ‘the government’s welfare budget pays for pensions, tax credits, benefits for the unemployed, the disabled and other groups’, that is, describing social security and tax credits. They were then asked, ‘Out of every £100 of this welfare budget, how much do you think is spent on benefits for unemployed people?’ Half of those surveyed thought that 40 per cent or more of spending was on the unemployed; a quarter thought it was more than 60 per cent. The average was 41 per cent.

It is actually 4 per cent. Even if one adds in tax credits for out-of-work families and benefits for other working-age people who are out of work for other reasons (lone parents and sick and disabled people), the total comes to just a fifth of all social security and tax credits. And social security and tax credits together are less than half of all spending on the welfare state when we include the NHS, education, social care and housing. Most of the debate on ‘welfare’ is around what is, in fact, less than £1 in every £12.50 we spend on the welfare state.

The belief that so much of the money goes on handouts to the unemployed goes alongside beliefs in widespread fraud. The Department for Work and Pension’s own estimate across the whole of the benefit system (including pensions), based on its detailed examinations of a random sample of cases, is that just 0.7 per cent of all benefits (including pensions) are over-paid as the result of fraud. For Jobseeker’s Allowance, estimated fraud is 2.9 per cent.

But when people were asked what proportion of the total of benefits and tax credits was claimed fraudulently, the average was 27 per cent. This is nearly 50 times the grossed-up result from the DWP’s probes into random cases. A quarter thought that 40 per cent or more of benefits were being claimed fraudulently. This would mean virtually all non-pensioner claims were fraudulent.

But the central idea driving many attitudes and much politics is that the money goes on an unchanging group of people, different from the rest of us. One indication that this is not so is shown in Figure 1. Fewer than half of new claims for Jobseeker’s Allowance last more than two months. Only 6 per cent lasted as long as a year before the economic crisis, and still only 10 per cent after it. 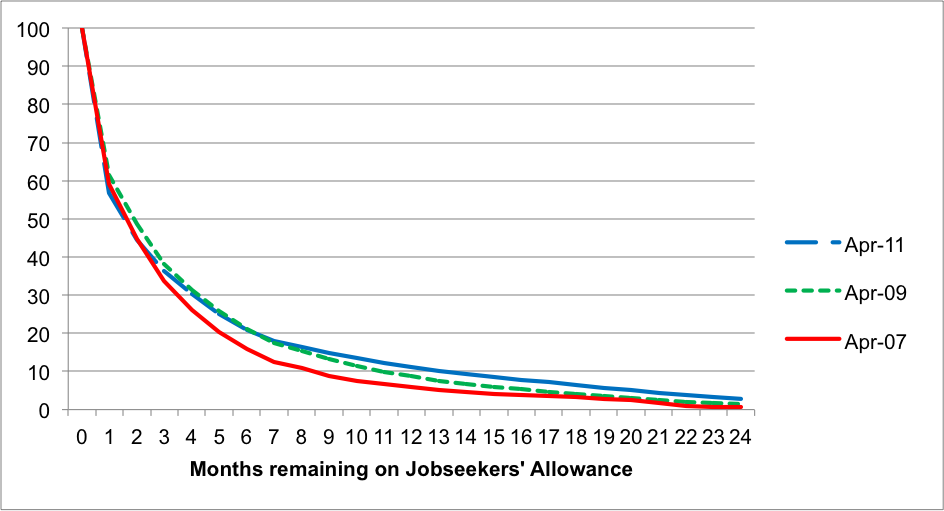 Source: Data kindly supplied by Department for Work and Pensions.

As discussed in my new book(*), to understand how the welfare state operates and who benefits from it, we have to think about how our lives change. This is not just a matter of movements in and out of work, but also of how much incomes vary for many from week to week, month to month, and over the life cycle. As most of what we spend goes on schools, health care and pensions, in the end nearly all of us have a large stake in the system – the equivalent of the value of three houses over a typical household’s lifetime.

The misconceptions about the welfare state are not harmless. They affect both those in or on the margins of poverty at any one time, and all of us through the choices we make for the whole system. Actual fraud of Jobseeker’s Allowance may be less than one thousandth of all social security spending, but if we believe it to be over a tenth, we will demand that politicians react accordingly.

Two groups of people suffer from this. The first are at the sharp end of ‘welfare reforms’ designed to cut spending and signal to voters that the government is acting on their concerns. As such a small share of the welfare state goes on benefits to people who are out of work, creating serious savings from them requires more and more drastic action.

We see this in the dramatic rise in ‘sanctioning’ of out-of-work claimants, having their benefits cut off, now three or four times the rate before 2008. As well as much harsher administration, many rules have been changed to cut entitlements or to reduce numbers. The changes include limits on Housing Benefit for private tenants, set at levels that only rise with general inflation and not at the rate rents are rising. In London, in particular, this means escalating ‘shortfalls’ to be paid from the rest of their income. For some social tenants, similar pressures come from the ‘Bedroom Tax’, under which tenants deemed to be under-occupying their property face cuts in benefit, even where there are no smaller properties to move to. Disability benefits have been reformed, with replacements designed to be cheaper. And low-income working-age households across many parts of England have faced cuts in Council Tax. In most places non-pensioners even with minimum incomes now newly have to pay 20 per cent of the tax.

These measures have in common how heavily they bear on what are often very narrow groups. This comes at a cost. The hardship to those affected is most obvious in the rapidly escalating use of voluntary food banks across the country. But it also comes in the individual testimonies of those who have found themselves effectively destitute as a result of what seem to them to be unfair decisions or of changing rules. What was once a national safety net, albeit not a very generous one, now has substantial holes in it.

The second group of losers from the myths around ‘welfare’ is much larger. Many more people benefit from the operation of the welfare state than are affected by narrowly selected parts of it at any one time – indeed, looked at over our whole lifetimes, nearly all of us do. But if we continue to think about policy as if all its benefits, costs and problems affect a group of ‘other’ people, we will make choices that fail to meet our own interests, even if we never expect to be out of work or to face sickness or disability ourselves.

The alternatives to the welfare state, through private insurance or through accumulating a large enough pile of cash to see our families and ourselves through all eventualities, are hugely expensive, and out of the question for most.

Those with an interest in keeping down the contribution from taxes on higher incomes or greater accumulations of wealth may continue to feed the misperceptions, so this will remain an up-hill battle, but how perceptions could be better brought into line with the reality of what is going on is now one of the central challenges facing those making and debating social policies and their future. In a situation where there are rising demands for services on the from and ageing population on one side and the legacy of crisis meaning tight constraints on resources on the other, we cannot afford to make choices and decisions by myth, rather than in the light of reality.

John Hills is Professor of Social Policy and Director of the Centre for Analysis of Social Exclusion (CASE) at the London School of Economics.  Good Times, Bad Times: The welfare myth of them and us is published by Policy Press. For further information, follow this link: Good times, bad times