Lampedusa: a cruel and corrupt system

When their boat capsized less than a mile off the tiny Italian island of Lampedusa on October 3, more than 360 asylum seekers from Eritrea and Somalia lost their lives. The tragedy once more drew international attention to the lethal risks migrants take when they try to cross the Mediterranean to Europe. However, much more remains to be told about what really goes on in and around Lampedusa. Indeed, many of the facts are suppressed – voluntarily or not – by both journalists and politicians.

Despite the worldwide media and political attention following the tragedy at the beginning of October, what happened then was not anything new by the standards of the Mediterranean. These are waters where over the past 25 years official figures suggest that more than 20,000 people  have died trying to reach the Italian coast. Many more deaths are unrecorded.

What was unusual about the October disaster is the geographical location of the tragedy and the very vocal response from national and European politicians and media. Typically, migrants’ boats never actually reach Lampedusa. Instead, the patrol boats operated by FRONTEX  – the European agency for co-ordinating the guarding of the European external border – usually intercept them at sea. The patrol and rescue missions of European navies generally take place between 60 and 90 miles south of Lampedusa at the limits of Libyan waters – and often into them. Once migrants are transferred into the rescue boat, they are then taken to Lampedusa. This is practice that has been carried on for years and that suggests that European external border policing works by detecting migrants’ boats in the open sea, not apprehending them once they reach the island.

However, in October no patrolling vessels were available to intercept or help the hundreds of migrants who died. Italian authorities declared that their ships were unavailable because they were trying to tackle an increase in landings taking place all along the coasts of southern and eastern Sicily at the time. This was presented as a sudden and unexpected event, a response to migrant boats changing their routes through the Mediterranean. Yet this was not new at all. Previously migrant arrivals in Sicily had simply been ignored by the media and politicians. Indeed, ‘graveyards’ of migrant boats are visible in several southern Sicilian harbours. Until this year, migrant boats reached the coasts of Sicily without being intercepted. Once they landed, migrants simply ‘disappeared’. 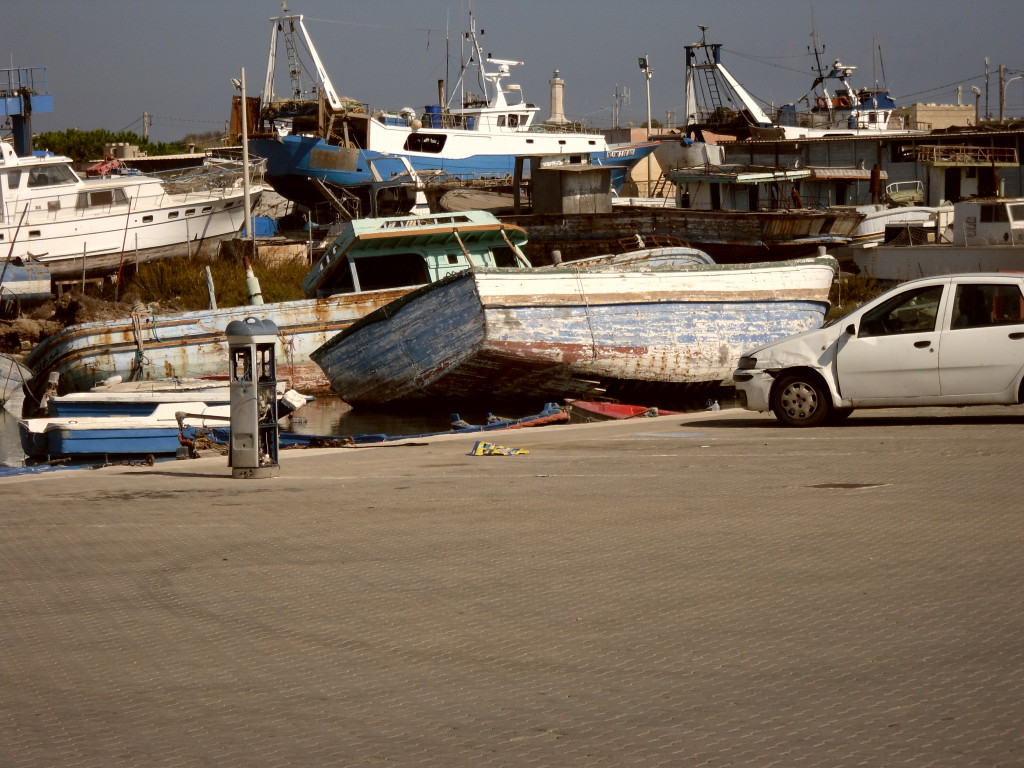 On the one hand, migrant boats do not get close to Lampedusa without being intercepted. On the other hand, the operations involving FRONTEX and Italian patrols elsewhere than Lampedusa were not responding to an actual emergency.

Despite their media and political significance, those crossing the sea to enter the Italian – and then European – territory without the necessary documents are less than the 30% of the total of people residing irregularly in Italy. The majority are overstayers whose visa has expired. Moreover, most of those reaching Lampedusa have a right of asylum, coming primarily from Eritrea, Ethiopia, Somalia and now Syria. Those arriving in Lampedusa are also more likely to be relatively well-off individuals compared to many of those seeking asylum elsewhere. Poor migrants from these countries of origin are unable to afford such an expensive journey – it generally costs thousands of euros. While the socio-economic conditions of the Lampedusa migrants would most probably meet the economic criteria to enter the EU if they had regular visas, in their absence the only way into the EU is to cross its borders illegally. After all, access to regular visas is very difficult if the state from which migrants are escaping fails to provide any valid identity documents to enable application for a European visa.

Once landed in Lampedusa, migrants are transferred to the holding centre at Contrada Imbriacola  , officially a migrant identification and first aid facility that can host a maximum of 250 people. According to national legislation, it is a closed centre where the ‘residents’ are not allowed to leave. At the same time, detention of an asylum seeker inside the facility must not exceed a maximum of 48 hours, though this can be extended for another 48 hours if a migrants’ identity cannot be confirmed. After this, detainees are supposed to be transferred to migrant detention facilities in mainland Italy to wait in detention for a maximum of a further 18 months  until their legal status is certified.

What happens in reality is that undocumented individuals arriving in Lampedusa remain in the centre for an average of three to four months. Since after the first 96 hours they are being illegally detained, after the fifth day they somehow ‘disappear’ from any official records. Given this, the centre is always overcrowded, hosting more than 500 detainees at any given time — and at its peak, 900 to 1,000.

The internal management of the facility is the sole responsibility of the private company Lampedusa Accoglienza, based in Agrigento. The Ministry of the Interior pays this company €30 to €50 per day per migrant and the company therefore generates a profit estimated at millions of Euros per year. On this basis, some may take the view that it has a direct interest in overcrowding the centre while providing the cheapest possible services.

Nevertheless, the illicit conduct does not stop here. Although migrants are not officially permitted to leave the centre, our direct experience in the island as well as various reports suggest that they are tacitly allowed to leave so as to ease tensions at the centre. In practice, a gap in the back-net surrounding the centre allows migrants to leave for the day.With migrants allowed to wander on the islands for months, Lampedusa has become an open-air detention camp. During their frustrating wait, they get in touch with locals. They pass their time walking along the port quays and the streets of the village, often sitting in the terraces of the local bars. They stay there for hours, side-by-side locals and those officials of the coast guard, the navy or the police forces that rescued them into the sea. Throughout the months, they became familiar faces for some, and disturbing visitors for other. 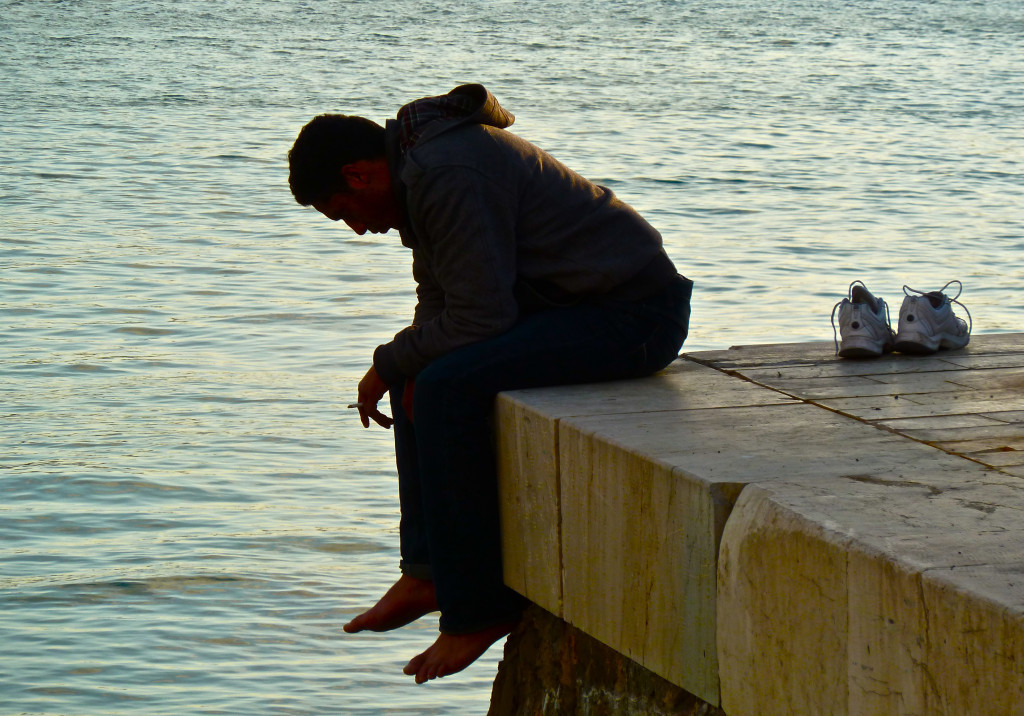 An informal economy has developed, with migrants selling to locals the cigarettes packs they are provided with inside the centre. Moreover, a few days after they land in Lampedusa, many of the newcomers ask locals to change on their behalf the money they were able to bring with them through their journey – often up to 600 and more dollars. Without any valid identity documents they are not allowed to change their money themselves in any of the local banks. If many locals are happy to help, others makes migrants pay a commission for the money they have just changed.

At around 9 or 10 pm, a police van passes along the few main roads of the island’s only village, picking up all migrants who have not already returned back to the centre. If anything happens to them outside the centre, they will probably be punished for having left illegally, but otherwise, a blind eye is turned.

The centre on Lampedusa has been controversial for these and other reasons besides, not least the release of video showing detainees standing naked outdoors to be disinfected. While those revelations are shocking in themselves, it is clear that the whole process by which people end up on Lampedusa as migrants is dangerous and corrupt. We can only hope that more light is shone on that process and the treatment of those forced to put their lives at risk just to reach its shores.

Giacomo Orsini is a 3rd year bursary-funded PhD student and Graduate Teaching Assistant in the Sociology Department of the University of Essex. He has conducted fieldwork researches along the EU’s external boundary in Melilla, Morocco, and Malta. He also works with artisanal fishing communities living at the EU peripheries, in the islands of Lampedusa and Fuerteventura. Giacomo is a founder member of the European Sociological Association International Maritime Sociology Group, and a member of the University Association for Comparative Studies funded Collaborative Research Network on the Governance of Sustainability. Ilaria Vecchi is an Italian independent producer and director based in London. She has filmed and written for a number of different networks and magazines. She is a member of Askavusa – a Lampedusian cultural association – as well as one of the main organisers of the Lampedusa InFestival .Giacomo Sferlazzo  was born and currently lives on Lampedusa. He is one of the founding member of the local association Askavusa and a local activist and popular songwriter. He has taken the photos in the article.